I have over 25,000 images of children in the classroom from my work as an early childhood educator.  Even though I am retired, I am still able to revisit life in the classroom through those images.  Recently I was thinking about how those images testified to the fact that the children offered me gifts every day.  Those gifts often came in the form of attention and engagement to what I offered to them in terms of classroom setup, materials and provocations.  However, those gifts were as unique as each child.  Follow me around the classroom to find just a few examples of those gifts.

Below is a photo of a child who crawled inside a big box next to the sensory table.  He used the small blue pail to plug the cardboard tube.  When the children at the top of the tube indicated that the tube was full, the child in the box pulled the pail from the bottom of the tube and watched the pellets drain into the box. 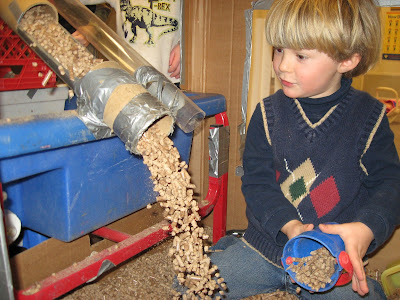 The gift this child offered me was a gift of wonder, the wonder of experiencing how his actions of plugging and unplugging generated a gush of pellets.

In the picture below, two children were playing basketball in the large muscle area of the room.  I purposefully set out the steps to add a challenge their sport. 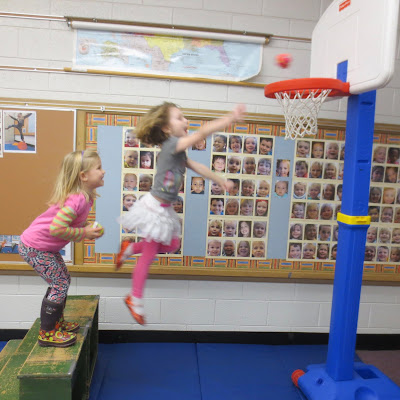 Their gift to me was a gift of engagement.  They took my offer of steps with the basketball hoop to more fully engage their bodies.  The endeavor became much more than just shooting a basket.  By engaging with the steps, it encompassed climbing, jumping, reaching, shooting, flying and landing.

The children pictured below were also in the large muscle area.  They were playing their own made-up game of basketball. The child sitting on the ledge held the basket above his head as the others attempted to throw the balls into the basket.  The child holding the basket kept moving the basket so it was not so easy to make a basket. 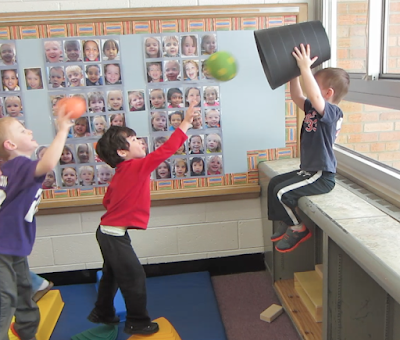 The gift here was a gift of creativity.  These children created an original game that included an unique challenge of a moving target. 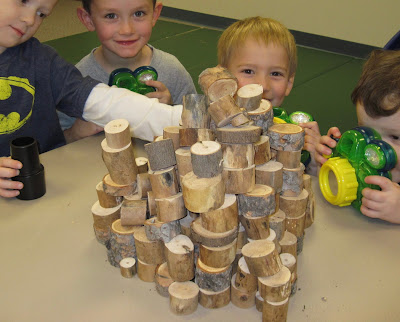 The gift here was one of executing a shared idea.   The attention to each other's moves made the balancing and building possible.  The shared idea was not the tower of tree cookies but an active idea of how to proceed step by step.

In the picture below, the child drew a picture from a photograph on the wall of a block structure he had built the week before.  He did his drawing on a white board that I held for him. 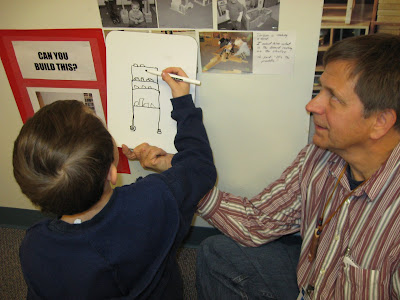 The gift here was one of noticing.  He paid careful attention to the photograph of his previous block structure so he could recreate it on the white board.

The picture below was taken in the block area.  In the photo the child put together a large floor puzzle of a tiger.  After completing the puzzle, he used blocks to outline the puzzle. 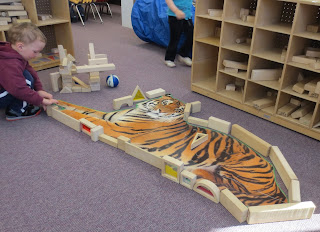 The gift here was one of original thinking.  The child decided to combine two completely different materials in a unique way to create an original work.

The photo below was taken at the writing table.  The child used the plasticine and wire that was provided to make a rainbow. 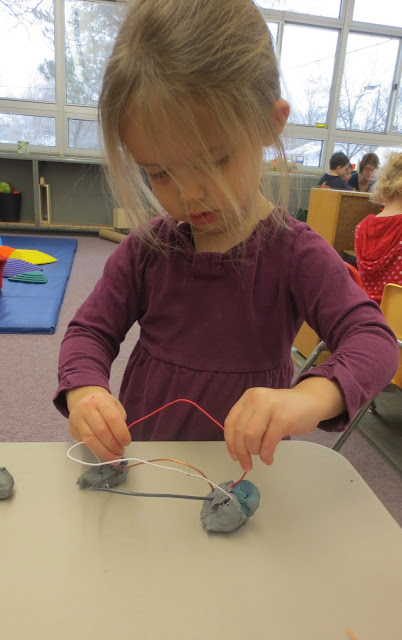 The gift here was one of bringing her best thinking to her undertaking.  Her best thinking included using her hands to make the wire bows for the rainbow arcs and to embed them in the plasticine.

The picture below was taken in the housekeeping area.  The child appropriated all the scarfs to accessorize his outfit. 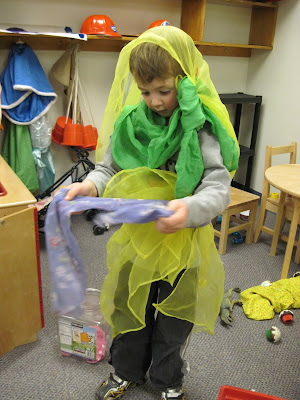 The gift here was one of unbridled experimentation.  The child was able to put a scarf on his head, around his neck and around his waist.  Where did the fourth one go?

In the photo below, a child used the window as a vertical platform to create a stained glass with window blocks. 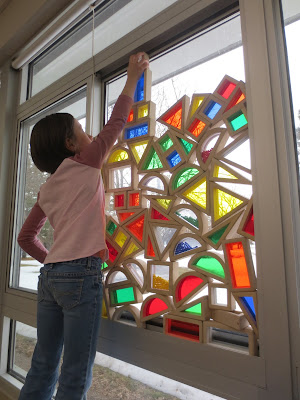 The gift here was her tacit insight that she had license to transform the classroom.  That is all the more impressive because the child also knew she could stand on the ledge , which was three feet off the ground, in order to complete her masterpiece.

Though the children did not think they were giving me gifts, they were teaching me to see the world through ever new and ingenious ways.  They were my best teachers who never stopped offering their unique gifts.  For that I am eternally grateful.