Children's operations might look simple but are really quite complex.  Take for instance the operations of filling, pouring and transporting.  To understand how complex these operations can be, I need to put them in a context.  The context I will put them in is an apparatus I built back in 2011: vertical boxes.  I built the apparatus using four boxes.  Box 1 was the base. I attached it to one end of the blue sensory table.  Boxes 2 and 3 were partially embedded in the base box.  Box 4 was attached to box 3. 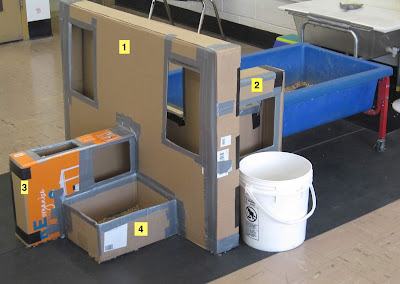 Holes of different sizes and orientations were cut in all the boxes except box 4.  I even cut a hole on top of the orange box in the section that was partially embedded in the base box.  (That hole is important to understand the last video in this post.) 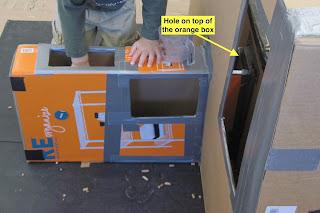 Those holes provided different pathways to move wooden fuel pellets around and through the apparatus.


From side to side from Thomas Bedard on Vimeo.

His operation turned out to be quite complex.  To get the pellets on his spoon out of the big box without spilling them, he had to carefully navigate the narrow verticality of the base box.  That took good eye-to-hand coordination and good muscle control.  Next, to reach over the box, he had to lift the spoon to shoulder height.  Because he still did not want spill any pellets, he had to keep the spoon horizontal.   Once he cleared the top of the box, he dropped the head of the spoon to deposit the pellets in the blue sensory table.  A nice added touch to his operation was when he monitored his operation by stretching his head over the top of the big box to see where the pellets dropped.

Here is a slightly more complicated operation of filling, pouring and transporting the wood pellets.  The child started his operation much like the previous child.  He scooped pellets into a small metal measuring cup by reaching deep into the window on his side of the large narrow box. He did not pour the pellets over the box like the first child.  Instead, he poured his cup of pellets into a five gallon pail.  Then he lifted the pail over the top of the box to pour his pellets into the blue sensory table.

There are several actions that added to the complexity of this child's operation.  First, he grabbed the hole on the top of the orange box with his left hand for body balance and stability.  Second he had to use both his hands to lift the five gallon pail to the top of the big box.  Third, because of the size of the five gallon pail, he used the top of the box as a fulcrum to help empty the pail of pellets into the blue sensory table.  In essence it was a three stage operation with specific challenges accompanying each stage.

A filling, pouring and transporting operation can often times work in reverse.  In the picture below, a child used a big white scoop to pour pellets from the table into the hole on the top of the orange box partially embedded in the big box (the hole can be seen in the second picture of this post).  The orange box was full, so as he poured, pellets spilled into the small box next to orange box.  Below, he observed the results of his actions. 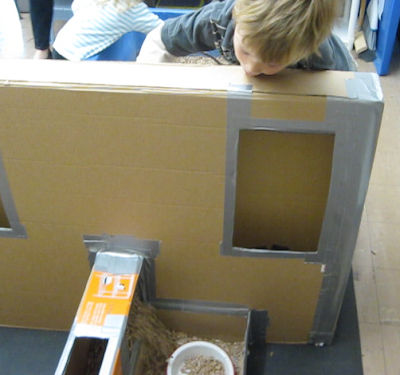 Here is a video that shows his operation.  It is interesting to note, that a child who heard the flow of pellets on the opposite side of the box, came over to watch the pellets tumble out of the orange box into the smaller box.  At the very end of the video, that child looked up at the boy on the other side of the box in an attempt to understand the connection between the boy pouring and the pellets dropping out of the orange box.


Novel path to fill the box from Thomas Bedard on Vimeo.

The child pouring the pellets added complexity to his operation by creating a novel path for transporting the pellets from the blue sensory table into the small box on the floor attached to a window of the orange box.  Not only was it a novel path---through the big box, through the full orange box and into the small box next to the orange box---it was partially hidden.  The child had to connect his actions on one side of the box with the overflow of pellets on the other side of the box even though he could not see full path of the flowing pellets.

I have just scratched the surface of examples of how children's operations that may look simple are really quite complex.  A structure like the vertical boxes invites the children to explore its complexity.  In that way, the vertical boxes---or any other apparatus at the sensory table---honors the children's capacity to come up with new and complex operations to carry out self-selected challenges as they claim ownership of the apparatus.