Unsupervised play in the classroom

I have read that children no longer have as much unsupervised play compared to earlier generations.  I have also read that academics now crowd out free play for children in early childhood programs. I am wondering what is the difference between unsupervised play and free play?  Unsupervised play connotes an absence of an adult overseeing children's play. Otherwise, they are quite similar in that the children wholly choose their actions in an ever shifting dance of reciprocity. That makes me wonder: Can there really be anything like unsupervised play in the classroom?

To give a context to my wondering, I would like to look at an play episode around a very simple apparatus comprised of two sensory tables connected by a wooden tray. 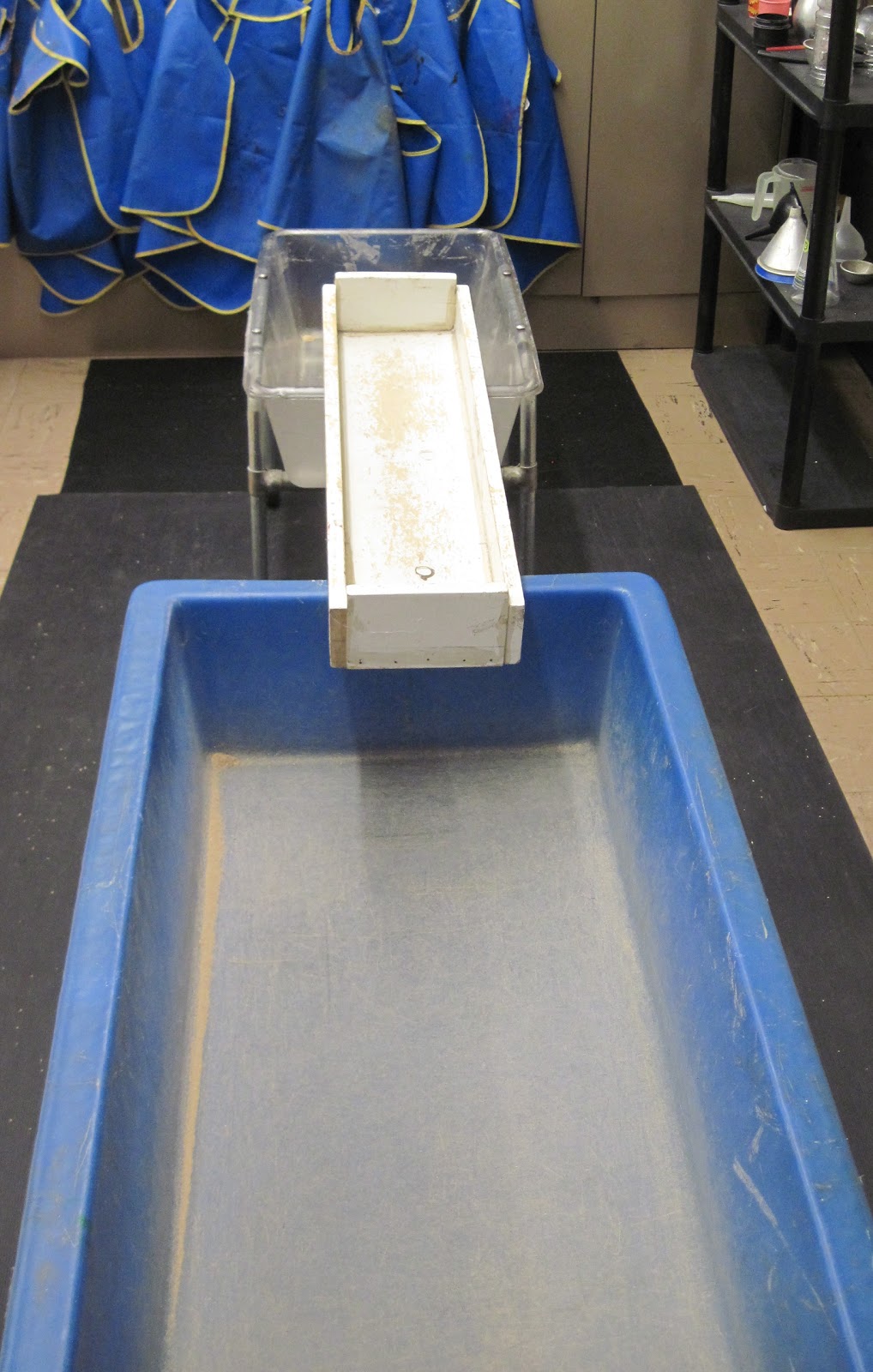 Not only is the apparatus simple, but so are the material provisions. The tables and tray contain only white sand and glass gems for this play episode. 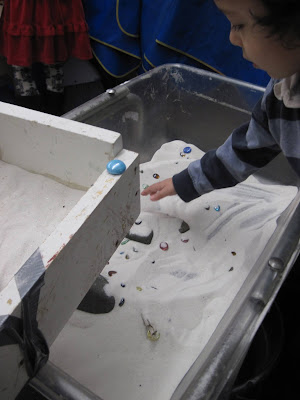 In the photo below, seven children all seem to be engaged in their own operations that span the two sensory tables. 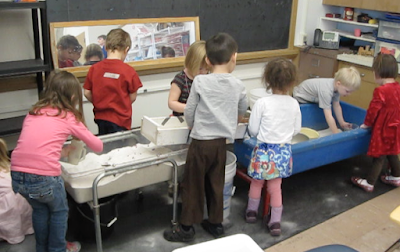 After about ten minutes, the children have all coalesced around the small sensory table. Since I am across the room, I do not know what has happened to bring them all together for a joint endeavor.

By the time I am able to get over to the sensory tables, the joint endeavor has already dissolved into play fragments of one or two children doing their own thing. 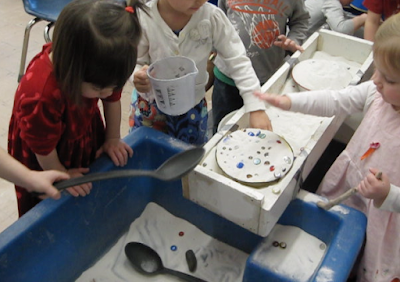 This is certainly free play. The children choose the trajectory of their play from moment to moment. That includes how to engage with the materials and with whom to engage them with. In other words, the play agenda is theirs. There is no adult directly overseeing their play or directly participating in their play. It's as if there is no adult supervising their play. That does not mean their is no adult supervision. It does mean that the supervision is imperceptible to the children.  That leads to another question: If the children do not register that there is an adult around, is that the same as unsupervised play?
I do not have an answer to that question, but I do think there is value to the idea that a teacher can fade into the background so free play looks a lot like unsupervised play.  The value comes from opening up multiple possibilities for children to create a dynamic flow in their play that an adult often sees as disjointed and illogical.  However, that dynamic flow is one of vitality and joy in which the children create their own worlds of sense and nonsense free of adult scrutiny and judgement.  Those worlds of sense and nonsense offer a priceless window into a realm of childhood that is often lost in the classroom.
Posted by Tom Bedard at 11/17/2020 0 comments

How does a minnow net full of sand and a bowl over a tower apparatus become a fire fighting helicopter in the hands of a child? 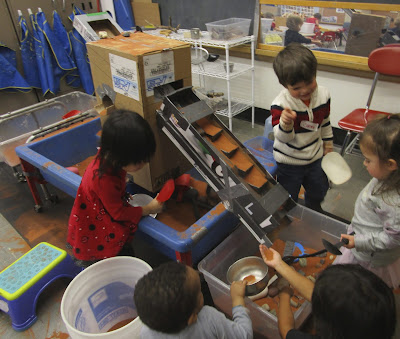 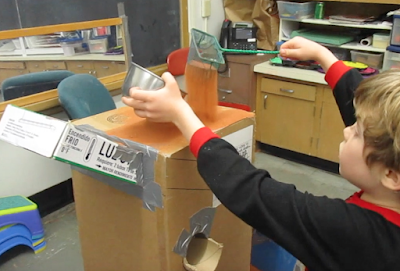 As the flow of sand dwindles, he scatters that last bit of sand back into the table. 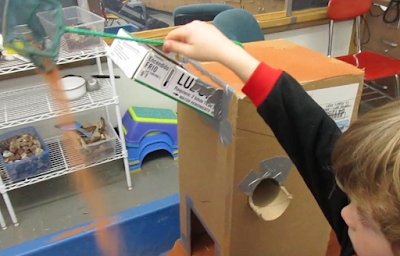 At this point, he switches strategies. Instead of filling the minnow net with sand and placing it in the bowl so the sand stays in the net, he fills his bowl with sand and pours it into the net over the top of the apparatus. That way, he gets a more vigourous flow from the minnow net. 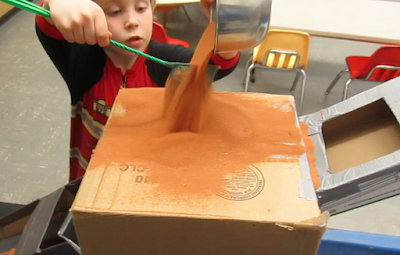 Again, as the flow dwindles from the minnow net, the child moves the final bit of sand over the side of the apparatus that has the cascade incline. 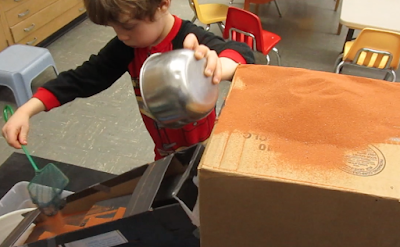 Below is the video of the episode. It clearly shows his focus on how the minnow net disperses the sand. As he scoops sand into his bowl for a second pour, he reveals that helicopters have something that they pour over fire.

It is the child's enterprise to make sense of the world. Sometimes that is as simple as pouring and filling a container with sand. (Actually those operations are not as simple as they seem. See The Art of Pouring.) Sometimes the child brings a certain experience or prior knowledge to the operation of filling and pouring that adds a representational element to something observed in the world. I am not sure the child in this episode has seen a real life helicopter fighting a fire, but he could have easily seen one depicted in a book or video. By bringing his prior knowledge to his exploration at the sensory table, he is able to represent how such a helicopter works. There are several features to his actions which may be salient for him as he depicts the fire fighting helicopter, but one that stands out is how the "stuff" to put out the fires is dispersed; the minnow net offers a credible facsimile of the fire-fighting actions of such a helicopter. As of yet, he does not have the word disperse in his verbal repertoire, but he certainly does in his developing repertoire of physical and observational operations. Without a real or play helicopter in sight, I guess that is how a minnow net full of sand and a bowl over a tower apparatus becomes a fire fighting helicopter.
Posted by Tom Bedard at 11/10/2020 0 comments