In my last post, I wrote about children making meaningful choices around an apparatus I called the vertical tube and rope apparatus. 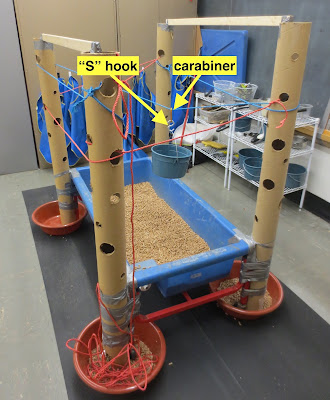 When I looked through my documentation on how children explored this apparatus, I noticed a couple of unique loose parts that played an integral role in their explorations.  Those loose parts were S hooks and carabiners.  In the picture above, the pail floats in midair above the table because the handle of the pail was suspended by a S hook attached to a carabiner attached to the rope strung over the table.

Here is a better view of the carabiner and S hook holding the pail in the air over the table.  That configuration allowed the child to pour hands-free. 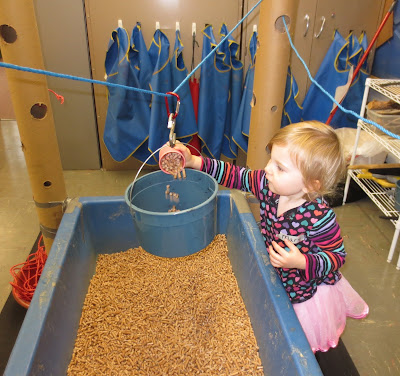 Contrast that operation with the child trying to hold the bucket up with one hand and pour with the other.  Of course, she could have set the pail in the bottom of the table and poured hands-free, but pouring pellets in the bucket hanging in the air was more intriguing for sure.

Not only was it intriguing to fill the bucket floating in midair, but with a little push or two, the pail easily became an experiment in pendular motion.

Besides hanging pails, this child also used the carabiner to hang a metal measuring cup on the rope for easy access. 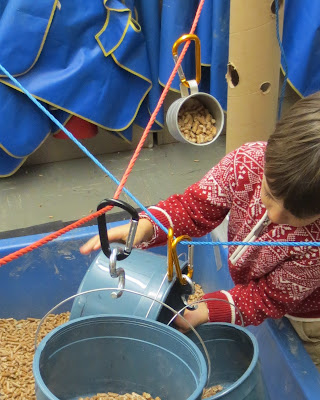 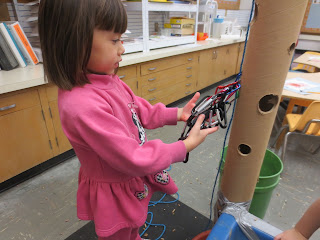 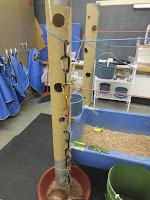 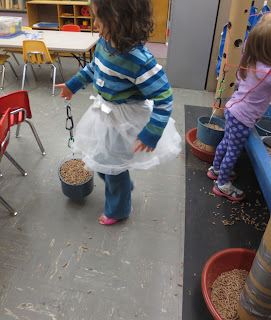 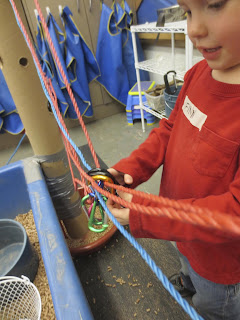 Connecting the S hooks from Thomas Bedard on Vimeo.

Her actions were deliberate and cautious because she was not sure the two sets would hang together. As she stepped back to view her completed challenge, I saw a sense of accomplishment both in her face and gestures.

So often I see loose part displays that would be considered art that are aesthetically pleasing using all manner of materials both natural and man-made.  In addition to using loose parts to make art, they are also used to represent things such as flowers or buildings.  The children have helped me expand my idea of what is a loose part.   I now think there needs to be another category of loose parts, namely, functional loose parts that the children use to complete an enterprise of their own making.  Ramps, tubes and tires are common loose parts that fit into this category and are well known in ECE.  After watching the children play and explore with carabiners and S hooks, let me add those to the list of functional loose parts.

In my last post, I wrote about children making choices.  I wondered if the choices they were making were meaningful choices or did those choices become meaningful once they made them.  Maybe it is not a question of one or the other.  Rather, it may be a combination of both.

To make some sense of this question, I looked at the choices children made in their play around an apparatus I built in 2013 that I called tall cardboard tubes and ropes.  I taped four tall cardboard tubes to each corner of the sensory table.  I drilled multiple holes in each of the tubes and strung ropes through the holes. 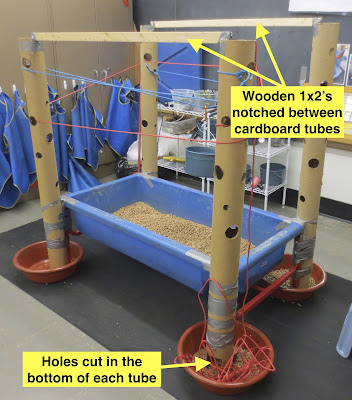 I cut holes on the bottom of each tube and also placed a plastic tub under each to catch the pellets that the children poured down the tubes.  I also added a 1"x2" boards between the cardboard tubes at the top for stability.

Because there were so many holes on so many levels, the children could make meaningful choices as to which holes they wanted to work with.   Below, the child reached as high as he possible to pour pellets into the hole at the top of the tube.  Because the hole was so high and he had to reach with his full extension, his pour yielded many pellets in the hole, but also some in his face. 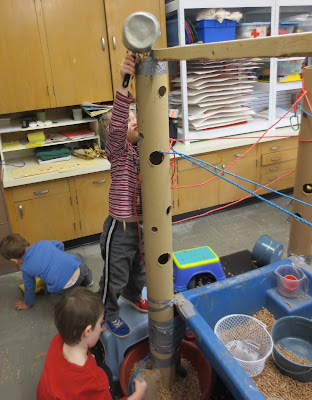 In a way, that choice became meaningful for him because he gained some physical knowledge about what his body could do. 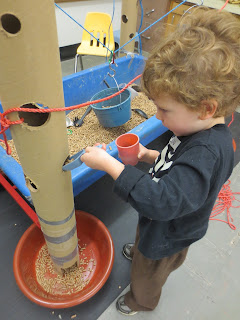 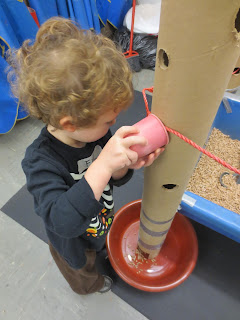 His choice took on more meaning when he encountered and solved a problem around pouring pellets into the middle hole.

The child below made a meaningful choice to bring the dinosaurs from the block area to the sensory table to combine them with the tub and pail on the floor. 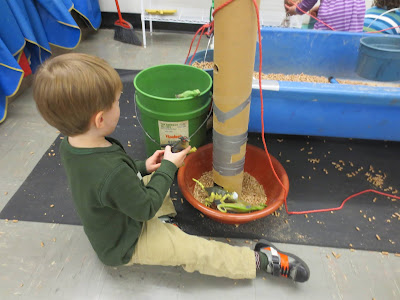 He created more meaning as he used the bottom hole, the tub and the green pail to establish a world in which the dinosaurs could climb, eat and fight.

Believe it or not, one of the meaningful choices the children made was to climb on this apparatus.  In the following video, two children climbed up onto the lip of the table so they could pour pellets down the top opening of the tubes.  In the process, they used and created a lot of embodied knowledge, especially in their efforts to keep their balance as they climbed onto the narrow lip of the table.  In fact, the child in the stripped shirt lost his balance on the first try and had to step back down onto the ground.  On the second try, as he stepped onto the lip of the table, he shifted his weight over the table so he would not loose his balance.  And both children knew to use their left hand to hold onto holes in the tubes for stability.


Climbing the apparatus from Thomas Bedard on Vimeo.

The children honored that boundary.  One or two children did step into the table, but it was an accident and they immediately stepped out.  That said, children are great limit testers.  In the video below, the child arranged stools so she could traverse the corner of the sensory table without stepping into the table.


Making a path from Thomas Bedard on Vimeo.

He body posture at the end told me that she was quite proud of herself because she was able to define the boundary with her path over and around the corner of the table without stepping into the table.