A little over a week ago, I was part of a presentation at the National Association for the Education of Young Children in Washington DC.  There were four of us presenting on the need for children to move to learn.  My part of the presentation revolved around making space and time inside the classroom for active, boisterous play.  Furthermore, I advocated for space and time for spontaneity in this type of play.  I wanted to draw a contrast between activities that a teacher sets up and those that emerge spontaneously from the children.

The example I used was a balance board I inherited from the classroom teacher before me.  When I found the board in the closet, it had black construction paper footprints taped individually across the board to signify the direction the children were to use when crossing the board.  The picture below shows the board after I removed the directional footprints. 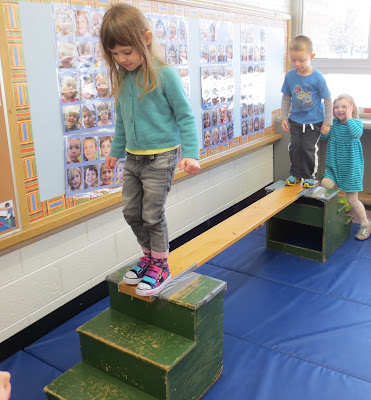 Even though there were no footprints, some children agreed by themselves to cross the board in one direction.

However, since the children were not required to go one way, they spontaneously came up with their own way to cross the board.  In the picture below, children are stepping up onto the board from both ends.  And the child in the blue is about to climb up onto the middle of the board. 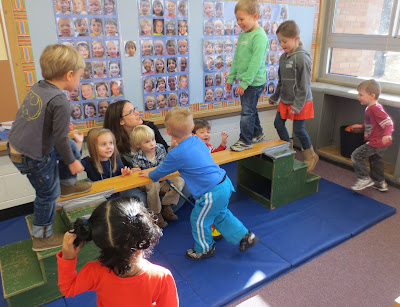 Utter chaos, right?  No.  This just happened to be a raucous game of "Three Billy Goats Gruff."  All the children on the board were the billy goats and the ones sitting on the mat were the trolls.  When the trolls said they were coming to eat them up, all the billy goats jumped off the "bridge."

When I contrast this spontaneous version of the story with a play that a preschool teacher might try to stage or direct, I see a very rich and rowdy version of the play the children authored themselves using their imagination.  They owned it.

The "Three Billy Goats Gruff" episode had a strong verbal narrative in addition to the a strong physical narrative.  However, the children did not always need a verbal narrative.  In the episode below, the children again climbed up onto the board from both ends.  They would meet in the middle and then jump and then repeat and repeat...  This made-up game of climb and jump evolved without words; they agreed non-verbally to meet in the middle and jump.


Board jumping from Thomas Bedard on Vimeo.

By removing the directional footprints, the children were given agency to use the board to their imaginations' content.  And the possibilities were endless. 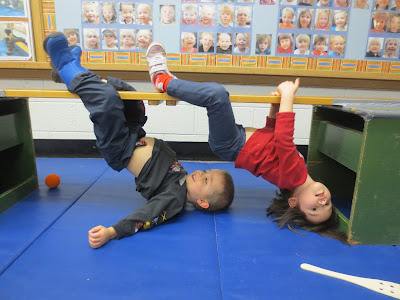 Why would they hang upside down?  A primary drive for the children was to engage in physical challenges to promote their own physical development.  For example, they were both working on their core strength as they were activating their vestibular (balance) system.  Children do not learn to sit by practicing sitting.  Rather, they need the core strength and balance to sit up.  Given the time and space, the children naturally work on physical skills that are needed to complete skills and learning in other domains, such as the cognitive and social/emotional domains.

But leave it to children to work on all the domains at once.  Each of the examples above illustrated that children included multiple domains in their actions.  Even the children hanging upside down are working in the cognitive and social domains.  The child on the left said he was the bat from Star Wars.  Many times there has to be a physical representation of an idea (cognitive) before there can be another form of representation. The other child did not know about the bat from Star Wars.  Rather, she was using her body to copy (social) his physical representation of an idea.