A little over four years ago, I went a little crazy with setting up Big boxes around the sensory table.  I started with four big boxes, one on each end and one on each side of the table. 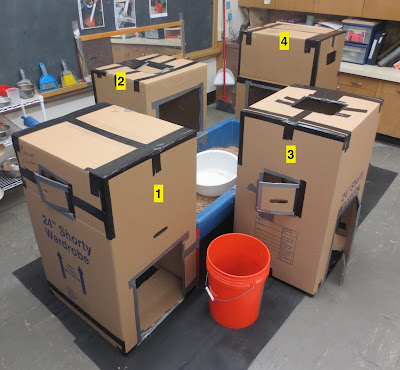 The idea was to create spaces from which the children could access the table almost like little houses with windows.  In the picture below, two children were kneeling inside the boxes to carry out their operations inside the table.  In other words, they were working outside the box from inside the box. 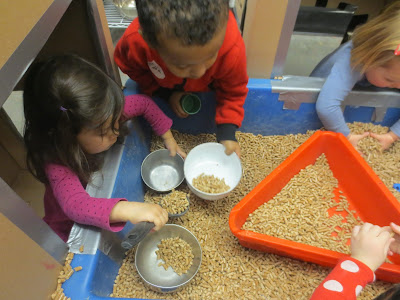 This picture also shows another space that was created by the big boxes around the table.  The child in the red was doing his operation from between the boxes.  So besides the four spaces of the boxes, there were four more spaces between the boxes at the four corners of the table.

I subsequently added two more big boxes.  Box 5 connected boxes 1 and 6 and box 6 connected boxes 2 and 3.  Box 4 was still a stand alone box.  I wrote blog posts on this configuration here and here. 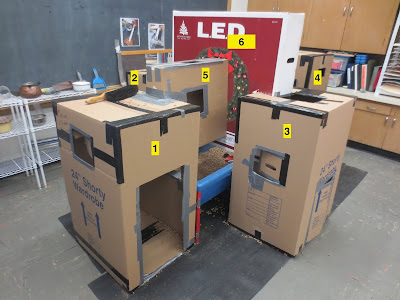 Though I basically used two more big boxes to encase the sensory table, I did not think about the resulting ramifications of that modification for children's play.  There were several ramifications but let me point out two that were noteworthy in terms of play spaces.

The first noteworthy play space was on top of the apparatus.  Since the space underneath the boxes was highly constricted, the top of the big boxes became stable platforms for the children to do their operations.  That was especially true if they wanted to transport the pellets between large containers and between different levels. 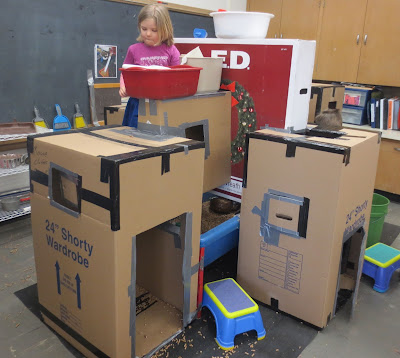 However, for the children to appropriate that space for play, they did have to climb on the lip of the table.  It was certainly a physical challenge to climb up and down, especially if the child carried one of the larger containers while stepping up or climbing down.  That may even have been one of the draws of that play space.

The second noteworthy play space was the floor.  In the video below, the child used the floor as a platform for her operation.  Again, since the space underneath the boxes was highly constricted, she placed three metal containers on the floor so she could fill them.

Another feature of the floor that made it noteworthy as a play space was that, as a platform, it was expandable.  Below, the children have taken over the floor space between the apparatus and the cabinets for their play.  There was no way they were going to be able to do their "cooking" in the highly constricted space underneath the big boxes over the table. 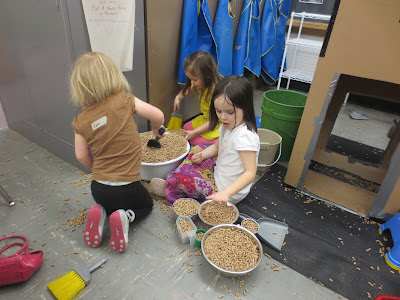 There is a subtle similarity between their cooking and my cooking.  Although I do not spill onto the floor to do my cooking, I do tend to expand onto all the available counter space.

The Wizard of Oz

Once again, I am venturing beyond the sand and water table for the inspiration for a new blog post.  In the process of tagging my pictures, I found a group of pictures and videos of children engaged in dramatic play in the house area.  Their play was a re-enactment of the story of The Wizard of Oz.

Children engaged in dramatic play all the time and in every part of the room.  Often times, it was an event that kept changing and moving throughout the room.  As it changed and moved, the children appropriated props to feed their dramatic play.  What caught my interest in their re-enactment of their Wizard of Oz play was one of the props they used to re-create an iconic scene from the original movie.

First, let me show you the prop the children commandeered to help elevate their play to a new level.  The prop was a big box that I had set up in the space between the book corner and the house corner.  You can read about how it ended up in that part of the classroom from a previous post of mine entitled  The life of a big box in my classroom 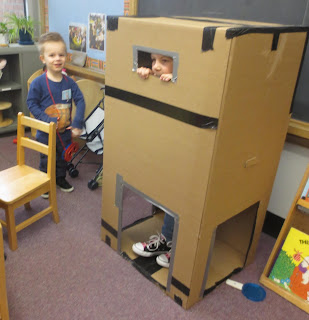 I would say this big box was kind of an odd duck standing in what might be considered a liminal or boundary space.  However, the box in that space offered the children a rich array of possibilities for their play.  In the picture above, the child was playing a little game peek-a-boo.  Or maybe he was observing what was happening in the classroom from his secret blind.

Since it was so close to the book corner, for another child it turned out a place to read in solitude. 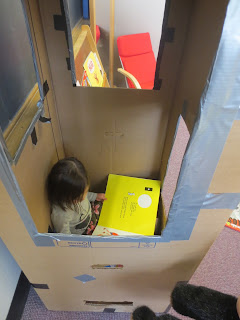 And since the big box was so close to the house area, some children used the dress up clothes to become superheroes.  And the superheroes needed a hideout, so they tipped the big box on its side to make their superhero cave. 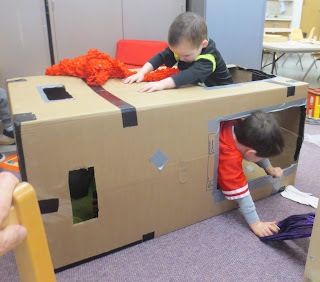 Before the children could recreate the iconic scene I alluded to near the beginning of this post, they first had to decide who was going to be Dorothy.  The child with the green sleeve took on the role of director. 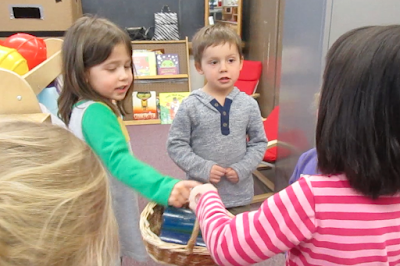 She indicated that the child in the stripes was the logical choice for Dorothy because she had a basket.  Since they all knew that Dorothy had a basket in the movie, they all agreed immediately.

After that role was decided, the children re-created the iconic scene when the house fell on the Wicked Witch of the West.   In the video below, one child laid on the floor and pulled a corner of the box over his feet. When he was done, he pretended he was dead by laying face down on the floor with one foot and ankle under the box.  The box was thus transformed into Dorothy's house that landed on the wicked witch.  The child who was directing encouraged Dorothy to crawl into her house.  To complete the scene, she encouraged the other players to join Dorothy in the house.


The Wizard of Oz from Thomas Bedard on Vimeo.

The excitement of re-creating this scene was palpable.  Their dramatic play was a moving target both physically and metaphorically.  At the very moment when the child pulled the big box over his feet, their play came together in such a way as to transcend space and time.  Though the details of how this scene came together deviated a bit from the original, the children captured to their great satisfaction and excitement the gestalt of that iconic scene from the movie.

With great pleasure, I can safely say that they were off to see the wizard, the wonderful Wizard of Oz.