Though I usually write about play in the sensory table, sometimes I do venture beyond the sensory table into play in other areas of the classroom.  That is the case with this post.   In the course of going back and tagging my pictures and videos, I found several images of children playing with medium size spools in many different ways.  As I looked over the images, I could not help but think that children have a flair for exploring the possibilities of any given material/object.

I am not quite clear how I acquired the medium spools that I offered to the children for their play.  Did I dumpster dive at a construction site or did a parent bring them in?  I do not know.  I do know they are the kind of spools that hold the wire that electricians use.

I put the spools on shelves in the block area.  One of the most common ways the children explored the spools was to stack them, balancing one on top of the other. 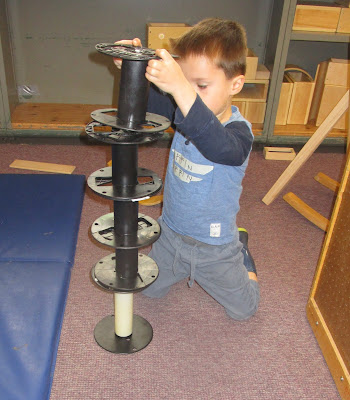 As the child explored the spools, he discovered that they were unique elements for building vertically.
The children pictured below also stacked the spools one on top of the other.  However, they added a surprising wrinkle to the simple operation of stacking the spools.  Between each set of spools they inserted blocks. 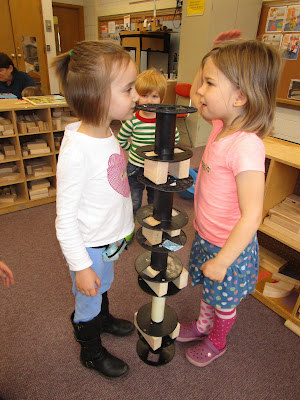 That novel combination of spools and blocks allowed the children to stack the spools higher.  And that may have been their intended purpose because they measured themselves in relation to their structure.
The children below also stacked the spools.  Instead of putting anything in between the spools, they put a basket on top of the stacked spools. 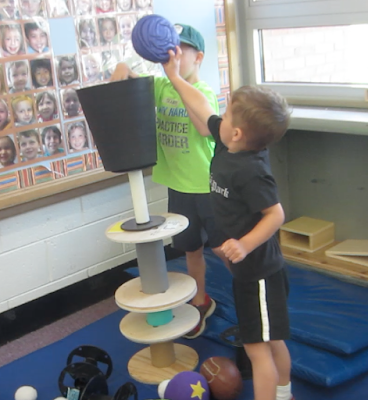 I always had a basket of balls in my classroom.  They just appropriated the basket to challenge themselves with their new game of "basketball."   That was a formidable challenge because the spools formed a narrow column based on a soft mat.  Balancing and stability of the structure were front and center for this investigation.

Stacking was only one type of exploration to emerge with the spools.  The child pictured below placed one of the spools on the rocking chair.  What this child made is the definition of creativity.  She took two unrelated objects and combined them to make something new: a rocker with a booster seat. 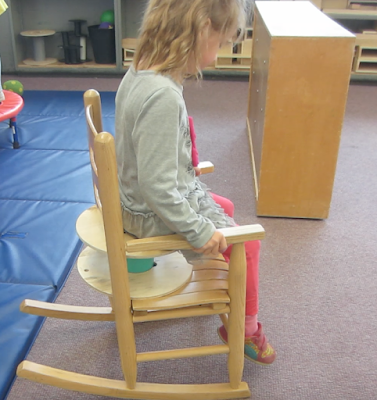 As she tested her modified rocking chair, she also discovered how adding the spool changed her center of gravity as she rocked.

In the picture below, two children found another use for the spools.  They placed their cars on the core of the spools to create monster trucks with giant wheels rolling down the slide. 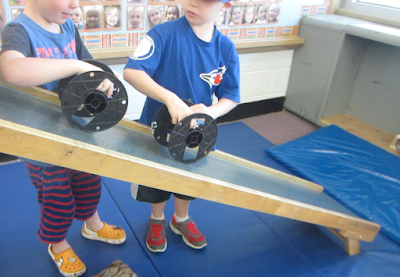 The child pictured below found yet another way to use the spools, namely to test her balance. Was she making roller skates? 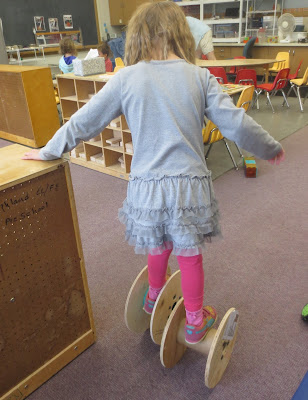 By the way, she was also testing the strength of the spools to see if they could support the weight of her body.

The thing about the spools was that they were small enough to be moved around the classroom to serve other purposes.  I found a picture of one of the spools in the housekeeping area.  In the children's hands, it turned out to be a birthday cake.  They used small sticks placed in the middle of the spool as candles. Interestingly, they also used a different kind of spool to decorate the cake.  They found a basket of empty tape spools and arranged them on top of the "cake."

The medium spools were set out in the classroom without any instructions.  I never even asked the children what they thought they could make with the spools.  Looking back on these images now, I suppose I could say that I set the spools out to challenge the children's investigative curiosity.

And that brings me to a quote from David Hawkin's book, "The Roots of Literacy." On page 116 he states: What motivates exploratory behavior, in a deep psychological sense, one cannot well say. ... It is a mode of behavior in which the distinction between ends and means collapses; it is its own end and it is its own reinforcement.  Or rather the reinforcement comes to it because of what is found along the pathways of exploration...

I have only given a few examples of what the children found along the pathways of exploration of the spools.  However, taken together it is easy to glimpse the children's uncompromising flair to investigate those spools.  Since that uncompromising flair for investigation is part of children's disposition to make meaning of materials and objects, almost anything in their world becomes a subject of that investigative flair.