Back in 2012, I built an apparatus I eventually called the box metropolis.  I started out with 11 boxes in two tables all connected.  Over the course of three weeks I added 16 more boxes for a total of 27 boxes all connected in one way or another. 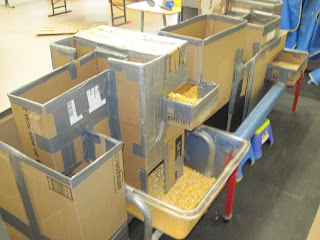 To complete the box metropolis, I added a final box that stood on the floor next to the sensory table.  Because this box was tall enough to connect with the rest of the apparatus, the bottom was essentially the floor and too low for the children to reach over the walls of the box.  I decided to create a false bottom midway up the box so the children could reach the bottom. 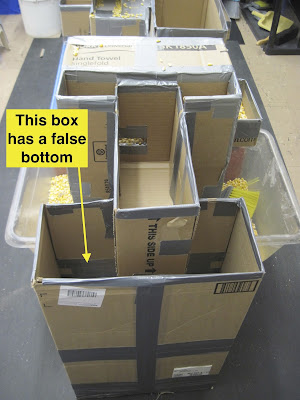 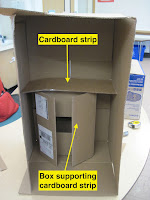 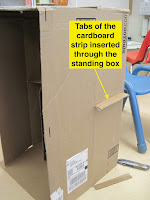 To create the false bottom, I cut a cardboard strip the width of the box.  The strip by itself would not be strong enough to hold the corn, so I used another box to support the cardboard strip.  I made the strip longer than the span across the box so I would have tabs extending out of the box.  I taped the box shut and then around the middle to tape down the tabs for added strength.


With the false bottom even toddlers could reach the feed corn in the box.  Of course, to do that they first had to stand on a stool. 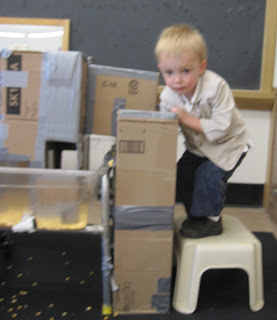 Later that year, I built another apparatus that required a false bottom.   I cut a large box in two and set each half on each end of the table.  Again, the boxes were tall enough to connect with the cardboard tubes at table height, but too tall for the children to reach to the bottom. 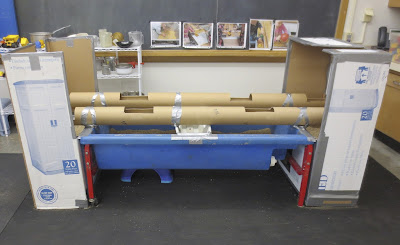 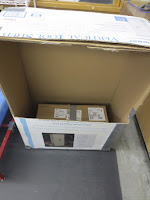 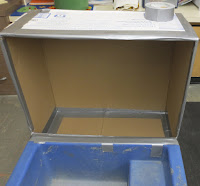 I needed two false bottoms.  This time I simply inserted support boxes inside each big box.  I cut a cardboard strips and I taped them over the support boxes.  I purposefully positioned the false bottoms below the lip of the table to create additional working surfaces easily accessible for the children's play. 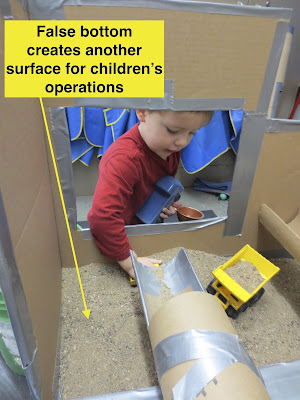 The third time I made a false bottom, I fabricated it inside the sensory table for a triangle divider apparatus. 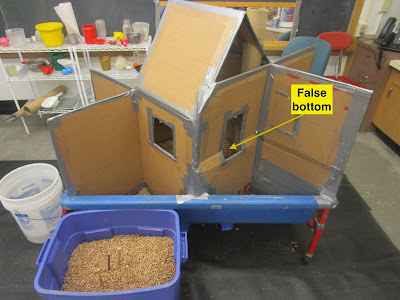 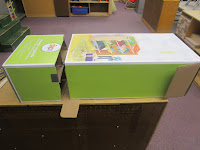 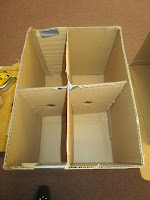 I cut the support box from a flimsier box this time.  Because of that, I needed to add cross pieces inside the support box to make it strong enough so the bottom would not collapse under weight. 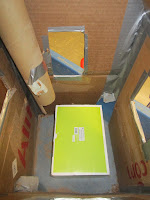 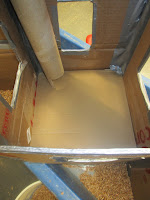 
Did you touch the bottom? from Thomas Bedard on Vimeo.


What made that so intriguing was that the false bottom was still higher than the bottom of the sensory table itself.

I cannot say that the children understood cognitively the discrepancy in heights created by the false bottoms.  However, on an experiential level, they did get to the bottom of the investigation of each of these apparatus.  (Pun is totally intended.)

I will be on vacation for the next two weeks with limited internet access so I will not be posting for at least two weeks.  Especially if you are new to this blog, you might use this opportunity to look back on some of  the older posts.  In November, I am a featured presenter at the NAEYC annual conference in Atlanta.  I will be presenting my newest talk on children's scientific inquiry at the water table.  If you are attending the conference and would like to hear it, my presentation is on Saturday, November 18th from 11:00 - 12:15 in room A411 in the Georgia World Conference Center.  If you do come, make sure you stop by and say hello.  If you cannot make the session but would still like to meet---this is, after all, a great place and time to network---send me an email.
Posted by Tom Bedard at 10/21/2017 4 comments