Last year I wrote about an apparatus I called Vertical Tubes in a Box. 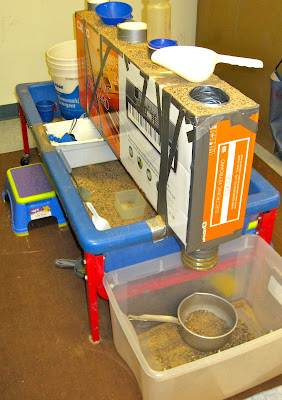 One of the discoveries was that static electricity is created as the sand slides down the sides of the funnel. 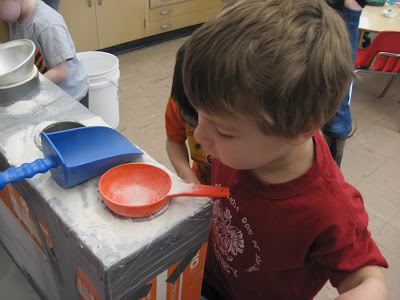 At first, he may have just been explaining the set up, but at some point, he discovers he can play with the words and the play becomes generative.  Though it does not show it in the clip, he creates real enjoyment for himself with his verbal play.   Although, maybe you did notice how his body motions---especially of his head---match the cadence of his "funnel on top of funnel" word play.

One child discovered that the flow of sand out of the bottom of tube is different depending on the size of the funnel.  The smaller the funnel opening, the narrower the flow of sand.  If you look closely at the picture below, you can see the child watching a narrow flow from the vertical tube. The narrow flow is created by a funnel with a small opening. 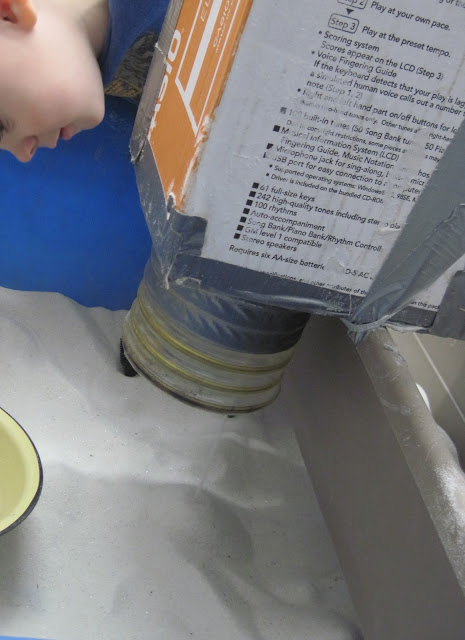 Another nice picture of focus, no?

This year, the children discovered that at least one funnel could actually be placed on the bottom of one of the vertical tubes. 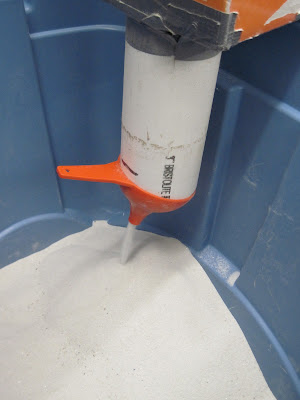 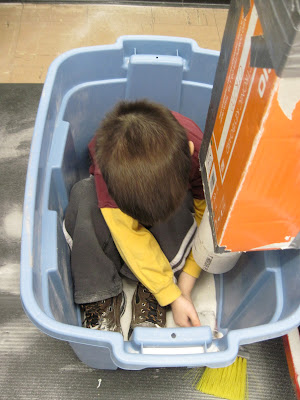 led to the discovery that it is possible to regulate the flow of sand coming down the vertical tube.

This boy is playing with regulating the flow of sand from the tube.  He uses his right hand to hold the funnel at the bottom of the vertical tube while his left hand covers and uncovers the funnel hole.  One important aspect of this play is that he senses when sand is dumped down the tube without seeing it because it exerts a sudden pressure on the funnel as it falls.  That is a type of learning that only comes from physically experiencing it.

I guess you could say we had a lot of funnel fun with the vertical tubes in a box this year.


Please note that I will not post next week.  I will be setting up a sand table display at an event organized by the Reggio-Inspired Network of Minnesota taking at Hamline University(St. Paul, MN) on Saturday, April 28.   The title of the event is:  Enter, Encounter, Engage: A Community Dialogue about Learning.   There will also be exploration of nature materials facilitated by Dodge Nature Center and exploration of sound and rhythm materials facilitated by Dianna Babcock. Follow this link for more details and a complete listing of the day: http://www.mnreggio.org
Posted by Tom Bedard at 4/19/2012 0 comments

If you look on the right-hand column of this blog, you will find a set of axioms.   Axiom #7 states that children will create activities that are tangental to the apparatus.  Before I show you such an activity, here is the apparatus to which it is tangental. 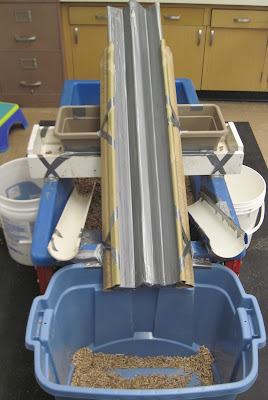 OK, now you can forget about the apparatus because the rest of the post has nothing to do with it. (If you want to read about the apparatus, it was featured in last week's post here.)
Before I can show you the activity that has nothing to do with this apparatus, it is helpful to know that there are two additional pieces of furniture in the sensory table area.  The first is a shelf in a corner on which all the articles and utensils to be used in the sensory table are displayed and open for the taking.  The second is a mirror on the wall next to the shelf. 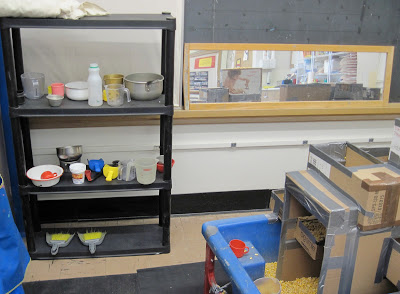 One of the articles on the shelf to choose from in this picture is the metal pot on the right end of the third shelf.  That pot and the mirror are central to the action that is tangental to the apparatus. In the video below, a child has placed the pot on his head like a hat.  He discovers his reflection in the mirror.  Watch how he explores that reflection.
Of course, there is nothing unusual about a child putting a pot on his head like a hat.  What is unusual and utterly fantastic is what happens as he sees his reflection in the mirror and begins to reference his actions using the mirror.  As he adjusts the pot on his head, he begins to use his reflection in the mirror to try to orient his hands on the pot.  That is special because mirror images are reverse images.   If you have ever tried to direct your hand by looking in the mirror, you know what I mean. Left is right, and right is left.  What better way to explore those reverse imagines than to use a pot on your head as a basis for that exploration.  Did you notice when he uses his right hand to follow the pot handle all the way to the mirror itself?  Think about what the child must be experiencing.  His hand is moving along the handle of the pot toward the mirror.  That means that his hand and its image are moving toward each other until they meet at the face of the mirror.  How novel is that for the child?
Enough analysis.  Watch the clip again and just enjoy a totally unscripted exploration of a boy with a pot on his head looking in a mirror.  You really cannot plan for these moments, but if you leave room for them, they will naturally surface.
For those of you in the Twin Cities, you may want to make a note of an upcoming event by the Reggio-Inspired Network of Minnesota taking place at Hamline University on Saturday, April 28.   The title of the event is:  Enter, Encounter, Engage: A Community Dialogue about Learning.  I will be doing an installation with some documentation.  There will also be exploration of nature materials facilitated by Dodge Nature Center and exploration of sound and rhythm materials facilitated by Dianna Babcock.  Follow this link for more details and a complete listing of the day: http://www.mnreggio.org
Posted by Tom Bedard at 4/14/2012 0 comments

Several years ago, a parent brought in the packing corners from the box in which her new refrigerator had arrived.  They are sturdy enough that I have used them once a year every since.  I first wrote about the packing corners here and here.  I took the two packing corners and duct taped them together to form a pair of cardboard chutes that looked like a long "W" 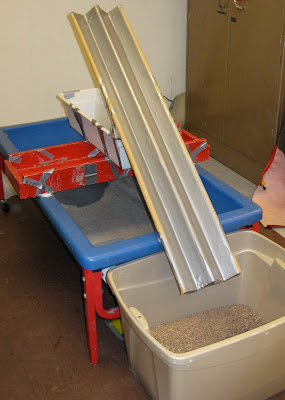 This year, I made an addition to the cardboard chutes.  I added another set of smaller packing corners on either side of the original apparatus.

The added packing corners are like wings on the sides of the original apparatus. 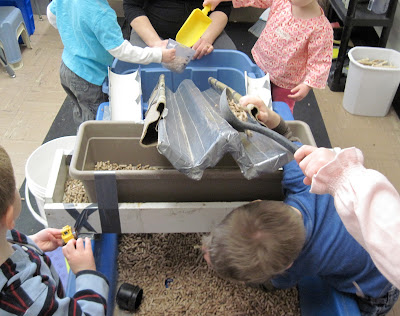 Unlike the original packing corners whose ends were duct taped closed, these new packing corners were left open.  When you leave open holes on an apparatus, the children will find them and use them (Axiom # 5 on the right). 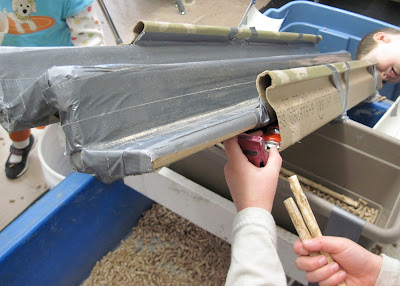 One of the boys found out that the little cars fit nicely down the holes.  Did you notice the fellow at the bottom looking up the chute in anticipation of the cars coming down?  Watch out!

I also added a new element this year.  I added sticks.  These are river sticks that look like they have been whittled.  But no, they are sticks that have had the bark chewed on by an animal.  See the teeth marks? 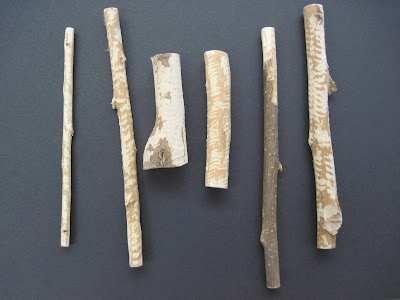 One of the main endeavors for the children with the new "wings" was to put the river sticks down the long, narrow holes of the hollow chutes.  Watch.

The boy in the video seems pretty pleased with putting the sticks in the hole to make them disappear.

Of course, since the sticks were different thicknesses, they sometimes got stuck and needed some problem solving to be dislodged.

The child began by taking a small stick out, but nothing happened.  She then pulled out another stick and that dislodged the rest.  She did notice another stick in the upper chamber of the chute. She tried to get it out, but ended up pushing back into the chute a bit more.

The addition of the "wings" to the original apparatus has now created an apparatus that incorporates both dimensions under #3 of the Dimensions and Elements on the right hand column of this blog.  That is, the apparatus is both open and closed.   Objects go down the chutes because of the elemental force of gravity.  That process is experienced differently by the children depending on whether that happens on the open chutes or in the closed chutes.  With the original, open chutes, all the action of objects going down the chute can be tracked visually.  The objects going down the closed chute disappear and reappear.   For some of the children it is simply a scheme to make objects disappear down the hole.  For some it is to track objects by putting them in at the top and looking for them to come out at the bottom.  And for some, it was a joint venture in which one child will put the objects down the chute and another child attempts to catch them. For the open chutes, the children do not have to imagine the motion of the objects going down the chute.  For the closed chutes, however, the children have to infer the motion because the objects disappear.  Almost sounds like a higher order thinking skill.

For those of you in the Twin Cities, you may want to make a note of an upcoming event by the Reggio-Inspired Network of Minnesota taking place at Hamline University on Saturday, April 28.   The title of the event is:  Enter, Encounter, Engage: A Community Dialogue about Learning.  I will be doing an installation with some documentation.  There will also be exploration of nature materials facilitated by Dodge Nature Center and exploration of sound and rhythm materials facilitated by Dianna Babcock.  Follow this link for more details and a complete listing of the day: http://www.mnreggio.org
Posted by Tom Bedard at 4/07/2012 6 comments