Aksel's Tray is a large flat tray made from wood that sits on top of a table.  The tray is closed on three sides but open on one end.  The tray is slightly propped opposite the open end so when there is some spillage, the water empties into the blue water table. 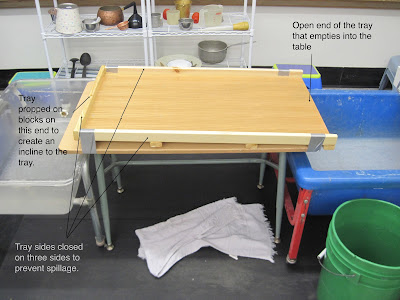 Here is the setup before the tray is added.  The table connects the two sensory tables.  Notice the white wooden tray that spans the blue table.  That was the first tray I used with the sensory table over twenty years ago.  You might say that Aksel's Tray is a version of that tray.

The purpose of this new tray is to provide a larger, flat surface for the children to work on.  (The old tray can serve the same purpose, but is more constricting.)  With a wider surface, a child can comfortably work with several pots and pans at the same time. 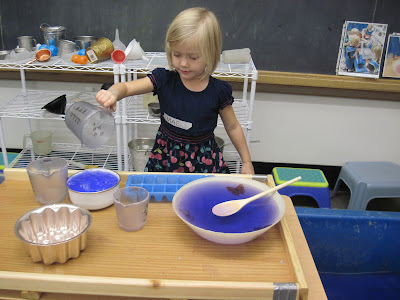 So why is it called Aksel's tray?  First you need to know that the table on which the tray sits is usually in the sensory area and is usually used to hold implements and utensils.  With the last apparatus, the table was clear of things, so Aksel commandeered it for his own purposes. 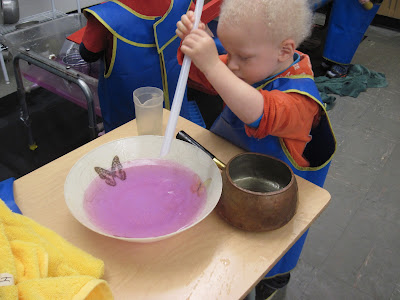 For Aksel, that meant mixing.  As Aksel mixed, he appropriated more pots and and bowls. 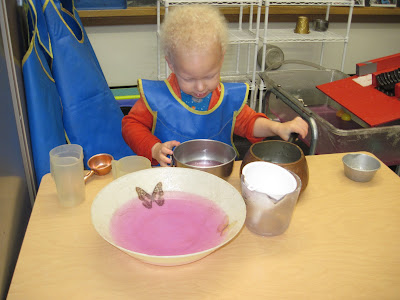 The more pots and bowls he used, the more water he used.  The more water he used, the more he spilled.  The more he spilled, the wetter the table got.  The wetter the table got, the more water went on the floor.  Aksel was so focused on his mixing, that I did not want to interrupt his enterprise.  As a consequence, the water actually began to puddle on the floor like never before.  I always have towels when there is water play at the table, but I could not keep up with this guy's industriousness.  It was then the light came on: Aksel was telling me that he---and the others---needed a wide surface to work on almost like a counter in a kitchen.   I thought if I could make a tray with a slight incline with three sides closed and one side open it would empty into the sensory table and the children could mix to their heart's content.  Thus was born Aksel's Tray.

WHAT ARE YOU MAKING? from Thomas Bedard on Vimeo.

Did you notice how wet the tray was?  And did you watch to the end when the third child poured water into her full container at the end of the video?

Did the tray work?  You are the judge.

Axiom #7 on the right-hand column of this blog states that children will always create their own play that is tangental to the apparatus.  Aksel's Tray is a good example of how rich that play is if we pay attention and take it as a cue for further activities or apparatus.  Thanks Aksel.

First of all, I want to thank all those who attended my presentation on sensory tables at the NAEYC annual conference in Atlanta last weekend. There has been an noticeable uptick in the number of hits to this blog, so I want to thank you.  If you ever have any questions or comments, I invite you to either comment on the post or send me an email.

After the Tubes and Funnels apparatus and after the Channel Board apparatus, I decided to combine the two apparatus into one big apparatus. 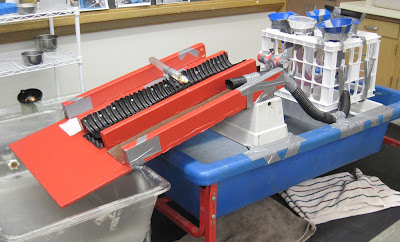 With this new combination, children still have to figure out where the water goes when they pour it in one of the funnels.  If you look at the channel board, you can see that two of the tubes empty onto the channel board.  That is trickier that it may seem because for water to flow out of the two tubes, the water first has to flow down and then back up before it can flow out of these long tubes.

What that means for the children operating on the combined apparatus is that the water does not flow out of the tubes with much force.  You can see the anemic flow of water out of the sprinkler head in the picture below. 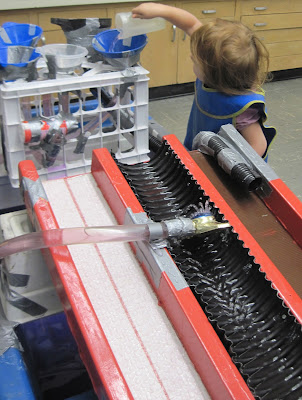 So how do children figure out which funnels empty out of which tubes?  They investigate.  That is illustrated nicely in the video below.  Watch as the boy first pours water into the black funnel.  He looks through the crate to see where the water goes.  He figures out pretty quickly that the funnel is connected to the black tube.  He then follows the tube down and then up.  He declares: "It went in here."  He follows the tube to the end and then uses his hand to trace the tube's path from crate to the board.  He asks: "Oh, what is this?"  I am not sure why he asks the question because he seems to know that the water flows through the tube.  Maybe he is just saying what he is thinking because he then states: "It [the water] went down this one." He again scoops up some water to pour in the funnels.  He starts with one funnel and actually looks at the channel board to see where the water will go.  After referencing the channel board, he decides to pour the water into the funnel in front of the black funnel.  He immediately turns and sees that the water come out of the sprinkler head.  He chuckles and says that it is funny.   Watch him figure out the apparatus.

Where does the water go? from Thomas Bedard on Vimeo.

I made them come out at the same time! from Thomas Bedard on Vimeo.

I think her little chuckle indicates the sense of agency she has in having figured this operation out.

I kept the loose parts from the previous post.  That led to a whole host of other operations and experimentation.  I was especially struck by two three-year-olds that figured out how to propel little orange bottles down the clear tube by first setting the bottle in the tube and then pouring water down the tube.  Watch.


What is so striking about this video is that they have figured out how water carries objects down a incline.  They did this on their own.  Not only that, they take turns effortlessly and with social grace.  That is a nice melding of science and social learning.