Let me begin with a quote from David Hawkins.  On page 139 of his book The Informed Vision, he states: "Because children differ in constitution and temperament, and also in the history of their previous learning, each child will assimilate experience and knowledge selectively from his environment, in accordance with his momentary readiness and his unique individual style."

I am in total agreement with his statement.  However, there would seem to be a necessary preamble to it.  And that would have to do with how children approach their experiences.  Although children may approach experiences similarly, those approaches will differ depending on the conditions Hawkins laid out in the opening quote.

For example, I went back into my archives to see the different ways children approached play and exploration around the pegboard platform.  I made the apparatus below using four cardboard tubes and a piece of pegboard.  I cut slits near the top of each tube and inserted the corners of the pegboard into the slits.  I also cut openings at the bottom of each tube so any sand poured into the tubes would empty back into the table. 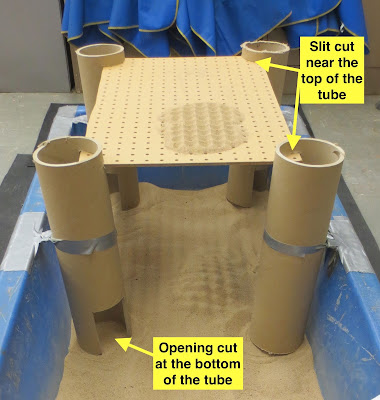 I taped each of the tubes to the lip of the table.  I was surprised that I did not need to do any more taping to make it stable.


How did the children approach the apparatus in their operations and in what way did those approaches differ? 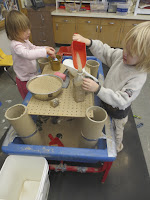 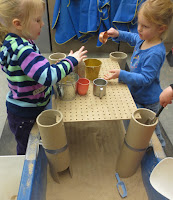 Another child used the apparatus as a platform but in a much different way.  The platform served as a base on which to construct small sculpture.  Basically, he propped sticks over an upside down stainless steel bowl. 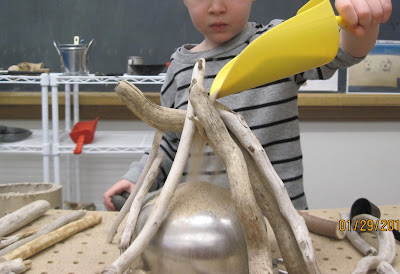 Another child took a totally different approach to using the platform.  Instead of using it as a counter or a base on which to build, she used the pegboard itself as a canvas to create a rather impressive pattern by methodically pouring sand over the entire top of it.


Creating a pattern from Thomas Bedard on Vimeo.

The resulting pattern was not only impressive, but it was highly symmetrical, especially when compared with the previous stick and stainless steel sculpture.

Another way the children approached the apparatus was to focus their operations on the cardboard tubes.  In the picture below, three children did three different operations with the tubes.  The child on the left with the necklace dropped rocks into the tube.  The child reaching into the tube on the right removed rocks from the tube.  And finally, the child with the yellow scoop just finished pouring sand into his tube. 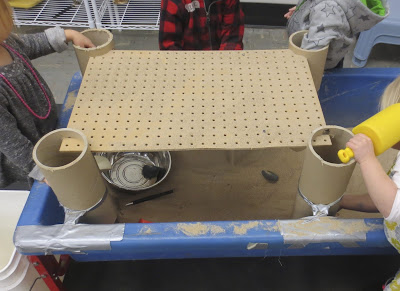 For one child, the tube was a container to fill with rocks.  However, when he tried to then fill the tube with sand, he noticed that most of the sand disappeared as it flowed through the rocks. 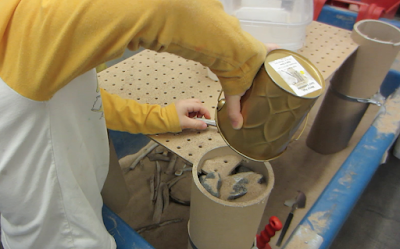 
Pulling out the rocks from Thomas Bedard on Vimeo.

This is only a small---and I emphasize, small---sampling of how children approached one apparatus.  The only way to understand how children can approach an apparatus in so many different ways is to appreciate how children bring their differing temperaments,  readiness and unique styles to their encounter with the apparatus.  We can observe the different approaches, but we cannot know what experience and knowledge they will assimilate.  We can only offer a rich environment in which they can play and explore to build their repertoire of experiences that lay an ongoing and critical foundation for all their subsequent learning.

On a shelf next to the sand and water table I had what I called a set of hodgepodge and doohickies. Basically they were an assortment of materials and containers from which the children could choose to use in their operations at the sensory table.  Though the materials and containers changed depending on whether there was sand or water in the table, a few things never changed.  One of those things was a little pink plastic cup. 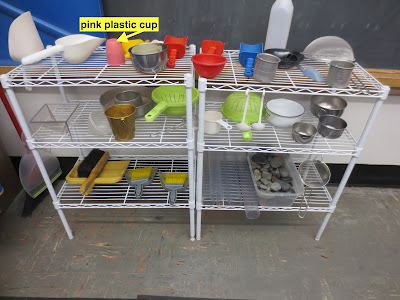 Many of the items I set out on the shelves came from second-hand stores like Goodwill.  However, I do not remember where I got the pink cup.  For all I know, I could have inherited it from a teacher before me.  I can say that the pink cup was not something I purposefully went looking for to add to the sensory table provisions on the shelf. 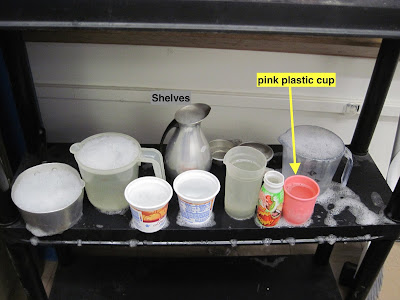 I am sure I entertained the idea of getting rid of that lowly little cup.  It is a good thing I did not because as tag my pictures, I keep seeing that pink cup everywhere.  Not only does it pop up everywhere, but it is used in any number of ways by the children's in their operations. 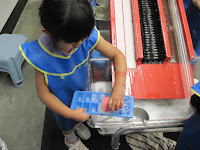 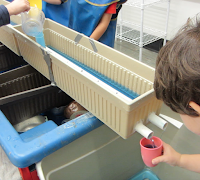 For instance, the children used the pink cup to fill other containers like a plastic ice cube tray (on the left).  Or they simply used it to catch water (on the right).

Axiom #6 on the right hand column of this blog states that children will try to stop the flow of any medium.  In the picture below the child found that the pink plastic cup fit nicely over the end of the PVC pipe, thus blocking the flow of water from the pipe. 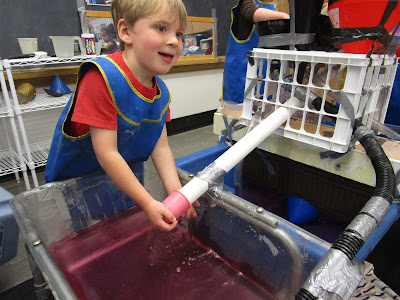 When packed with snow, the pink cup served as a mold. 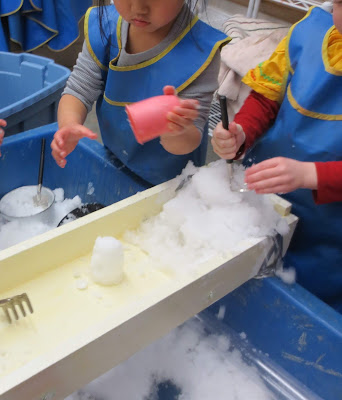 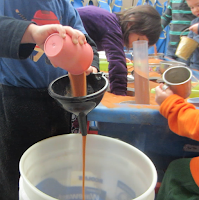 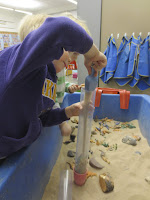 One child even asked the scientific question: How would the pink cup roll down a wavy incline?  She found out that the waviness of the incline coupled with the structure of the cup (narrower on the bottom than on the top) made for an interesting trajectory. 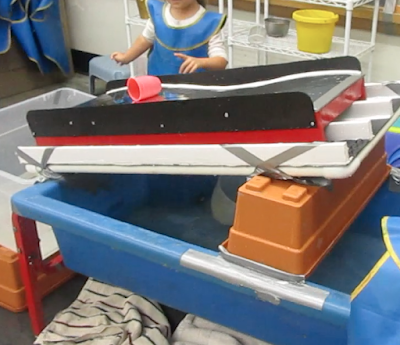 Even when the children were not using the pink plastic cup, it was always at the ready.  And it did not matter whether the sensory table was filled with sand or water.

I do know that this ordinary little cup added a richness to play in the sensory table that few---including myself---could have predicted.  This lowly cup makes a beautiful case for the the ordinary contributing to the extraordinary in children's play.

In his book The Informed Vision, David Hawkins uses the phrase "Messing About" as one of the phases of school work in science.  He defines Messing About as follows: "Children are given materials and equipment --- things --- and are allowed to construct, test, probe, and experiment without superimposed questions or instructions" (p. 68).

Children in the process of Messing About are natural tool makers.  In the following video, a child used a rock to clear the sand off of a small ledge in the sand table.  In essence, the child created a rock scraper to complete her chosen task.

It is fascinating to watch the fluid hand motions of the child as she used the rock scraper to try to get as much sand off of the ledge as possible.

In the second video, a child created a ramp from a piece of tree bark.  He created it by turning the smooth side up and propping it on the lip of the table.  He used the tree-bark ramp to test how different rocks slid down the incline.

The child pictured below used a funnel to create a tool to insure that all the sand he poured into the top funnel went into the plastic bottle on the bottom of the tub. 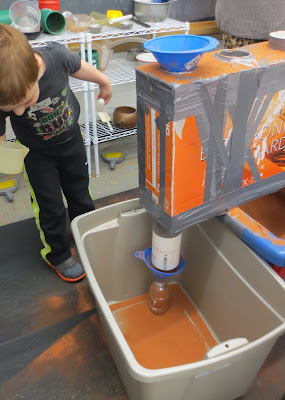 An interesting aspect of this exploration was that there was a slight delay from when the he poured sand into the top funnel and when it came out the bottom funnel into the clear plastic bottle.  That made it quite challenging to not overfill the bottle. 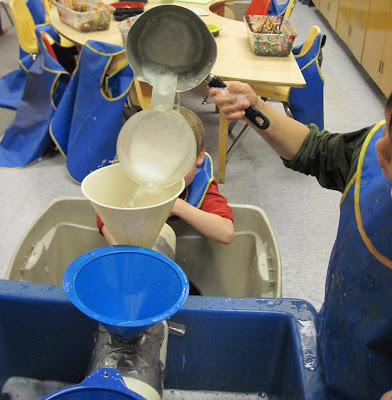 Although this may not look like what is normally considered a tool, the pot in this instance became an extension of his hand.

One of the most unique uses of a funnel was when a child used one to create a vacuum.  In the video below, the child experimented with plunging a funnel into a metal bowl with water.  As she did that, she nonchalantly placed her index finger over the hole.  And when she did that, air could not escape and the pressure differential caused her to lift water up as she pulled up on the funnel.


Creating a vacuum with a funnel from Thomas Bedard on Vimeo.

When she tried to push the funnel back into the water, again the air could not escape through the hole so it started to displace the water in the bowl making it hard for her to push the funnel to the bottom of the bowl.  Leave it to a three-year-old Messing About to create a vacuum with a funnel.

The child in the video below used a clear plastic tube to create a tool to extend his reach.  He did that by inserting his hand and arm as far into the tube as possible.   With the tube on his hand and arm, he collected some corn from the sensory table.  After collecting the corn, he reached through the window in the box to deposit the corn into the hole at the bottom of the box inside.


Making a tool to extend the hand from Thomas Bedard on Vimeo.

I recently read a story in the January/February 2019 issue of DISCOVER that made me think of this child and his tool.  In the article on page 46, scientists were trying to save the northern white rhino from complete extinction.  To do that, they had to build a custom probe to harvest a rhino's eggs because they were inaccessible using standard equipment.  Can't you just see this child creating such a probe?

Here is what Hawkins believes: "Children are in fact playful and eolithic, ...   I use the word eolithic in memory of our remoter ancestors who had to start life with objects not intended for any purpose, but who after picking up the stone, for example, invented uses for it. The first invention was not the object --- but the purpose." (p 107 -108).
Posted by Tom Bedard at 4/06/2019 1 comments