I write almost exclusively about play and exploration at the sand and water table.  However, for this post, I will change things up a bit.  I would like to write about how children appropriated a rather unique space in the classroom.

My classroom was an old elementary classroom with a bank of windows for one wall.  Underneath the widows was a 12-14" ledge.  The ledge was designed to accommodate a blower unit and extra classroom shelves. 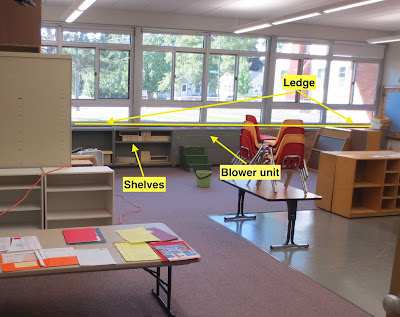 I purposely decided not to put anything on the ledge because I wanted the children to be able to see out.  Before long, though, the children appropriated the ledge for their play. 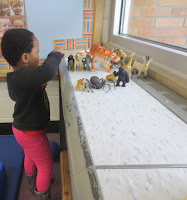 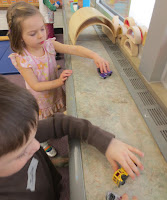 The empty ledge became an invitation for the children to line up the animals or to drive the little cars.  This ledge was an intriguing space because it formed a long horizontal plane on which to play.  In addition, the space was at shoulder level so they could play standing up. 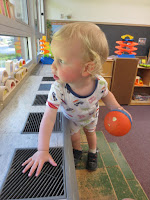 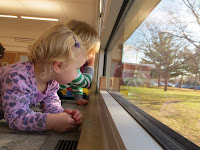 I still wanted the children, especially the toddlers, to be able to look out the window so I added a set of homemade green steps in front of the blower unit. 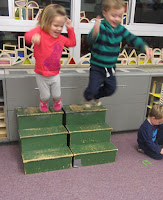 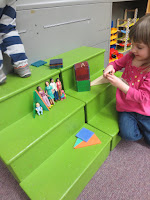 It was not long before the children appropriated the steps for their play.  It made a great platform to test their jumping skills or to make a home for a family.  Again, the steps offered an intriguing space with multiple levels.

By providing the steps to look out the window, I also provided easy access to the ledge itself. 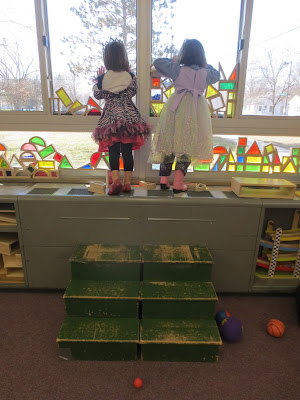 I must admit that I was not fully cognizant of this invitation.  However, once I realized what I had done, I had to make a decision: Was it OK for the children to climb on the ledge?  I decided, yes, it was OK. 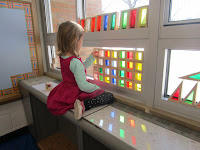 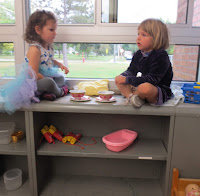 As a consequence, the ledge morphed into a place to build with the colored blocks in the window sill or to have a tea party with a friend. 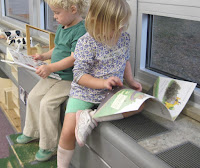 The ledge became a place to hangout and read or to sit during our group story and song time.

One of the big surprises for the children and myself was blower that was part of the ledge.  Though it was the heating unit in the winter and would blow hot at times, most of the time it circulated the air in the room.  The children did learn to be careful when it was hot, but otherwise they found the blower offered plenty of opportunity for impromptu scientific experiments.  In the video below, the child took a scarf from the house area and placed it over the blower to see what would happen.

Here was another experiment some children tried.  They stood over the blower in their dress up clothes to feel and watch their dresses flutter in the air. 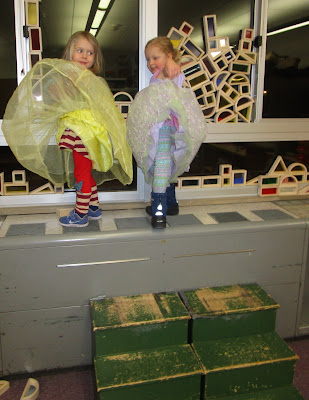 Once I made that decision that it was OK for the children to work, stand and play on the ledge, it became one of the most important play spaces in my classroom.   They experimented and explored the space; they conquered the space.  This became their space that they appropriated in ways that I could never have imagined.

What decision would you have made?  In any case, this is just the beginning of how they appropriated the ledge for play.  Wait until you see part two.

I have been thinking a lot about traces lately.  I started out by thinking about the types of traces children leave in the classroom.  Of course since this is a blog about sand and water tables, I went looking for traces there.  I specifically looked at traces at the sand table that was filled with Jurassic Sand because I had a vivid memory of at least two examples of traces children had left.

In the first example, a child sprinkled sand onto the table covering with holes apparatus and used her fingers to make make lines and squiggles. 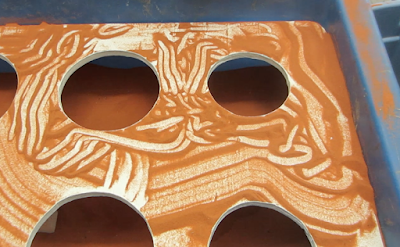 In the second example, a child traced the outline of her hand in the sand that had spilled on the floor. 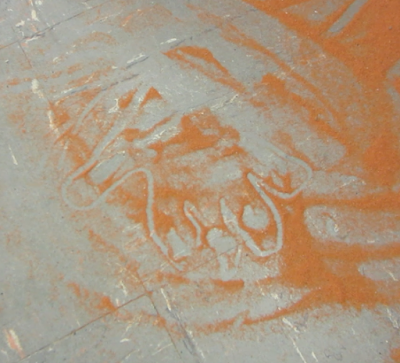 Both of these examples are static traces that the children left in the classroom as they played.  That got me wondering what were the invisible traces the children conjured up that led to these fleeting impressions?  And then how did these old traces combine with these just-produced traces?  Is this what constitutes learning?

I started looking for pictures that captured the flow of children's experiences, again with the Jurassic Sand.  I found a wide variety of images of children attending to how the sand flowed through their hands and various implements.  These were moments in time that they created.

A child slowly released sand in a stream from her right hand onto the back of her left hand. 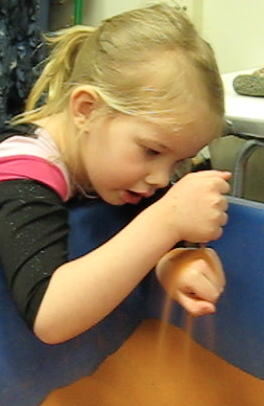 A child used the scoop with a small hole in the bottom to create a fine stream she distributed back into the table.  (If you look at the stream coming from the bottom of the scoop, you can see the stream is bent because she was moving the scoop over the table.  The picture itself captured a slightly more complex trace of movement. 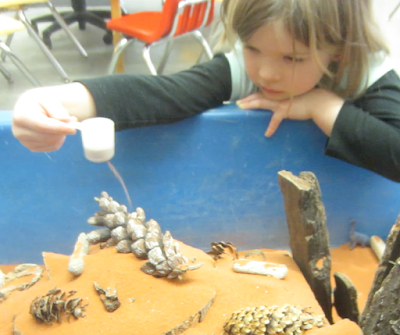 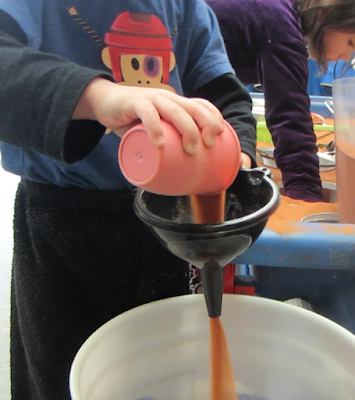 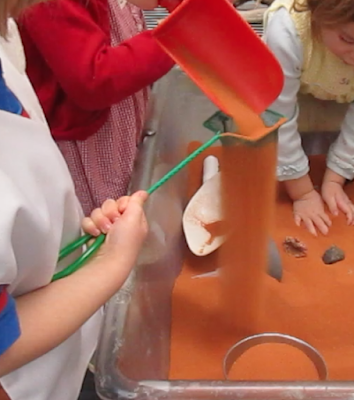 I am sure the children do not carry the full memory of these experiences with the sand.  But what are the traces of their experiences that became physical, mental and emotional memories from which to draw upon as they continue to encounter and make sense of the world around them?

Some of the trace memories necessarily revolve around a growing familiarity of physical properties of the materials they employed in their operations.  Could there also have been trace memories of agency?  Will the children remember they were given license to feed their curiosity, to ask questions, to experiment?  What role do emotional trace memories such as mastery and joy play in helping children inhabit and navigate the world?

P.S. As I edited the draft of my post, I realized that I chose the first two images because I had two specific memories of children creating trace images.  I doubt that they remembered the traces they created, but why did I?  Interestingly, I used those traces to feed my curiosity about how children make sense of the world.  As I fed that curiosity, my inquiry on traces morphed into a different question about traces.  It is easy to grasp a static trace image, but is it possible to find more dynamic trace images of children's operations?  That eventually got me wondering about trace memories that are not just physical and mental, but also emotional.   I will leave you with that to make sense of it as you will.  Hopefully I have left enough traces.
Posted by Tom Bedard at 8/18/2018 0 comments

I have a proposition that I want to see if it makes sense.  The proposition is: Children's actions are never random and neither are they planned.  Though this is not a direct quote from Movement and Experimentation in Young Children's Learning by Liselott Mariett Olsson, it comes from discussions I have had with others about the book.

To see if the proposition makes sense, I have chosen three video clips taken with a child who worked with the apparatus pictured below.  More precisely, he explored moving things through the two cardboard tubes that connected two sensory tables filled with wood fuel pellets. 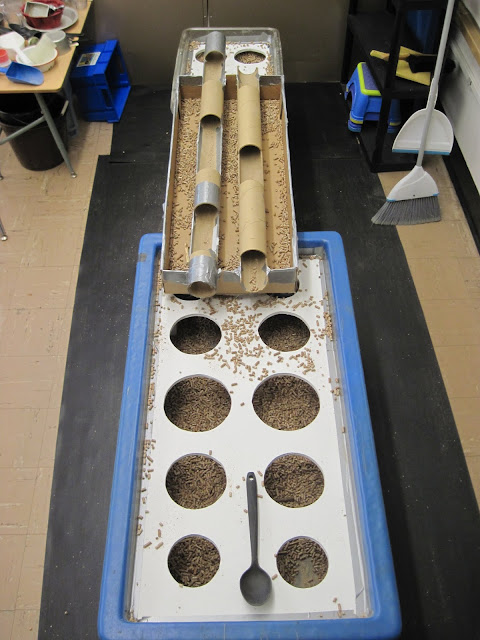 In the first video clip, he used a homemade plunger---a jar lid attached to the end of a short wooden dowel---to move sticks through one of the tubes.  It is an operation that seemed methodical as he moved the sticks through each section of the tube before pushing them completely out of the tube.


Plunger and sticks from Thomas Bedard on Vimeo.

In the second video, the child switched the tubes on which he was working.  Instead of moving sticks through the tube, he moved pellets through the tube.  And instead of using only one plunger, he used two.  In addition, he added an extra challenge by working in such a way as to lean over to the other side of the apparatus.


Two plungers and pellets from Thomas Bedard on Vimeo.

In the third video, the child again moved pellets through the tube featured above.  Two aspects of his operation, however, were different.  First, he moved to the side closest the tube for easier access.  Second, he reversed the plunging process by pulling the plunger back through the tube.


Because he reversed the operation, he both pushed the lid part of the plunger and pulled its handle through each of the sections.  That evened out the forces so he had more control over how the plunger traveled through each section.

If I look back at the proposition, his actions were not random.  The orientation of the apparatus invited him to move the sticks and pellets horizontally through the cardboard tubes.   The plungers were another invitation especially since their diameters matched so closely to the diameters of the cardboard tubes.  There were necessarily other factors that are not so visible that contributed to the non-randomness of this child's actions.  One factor could have been this child's penchant to experiment and explore this type of apparatus.  Yet another factor could have been that this child saw another child use the plungers to move things through the tubes.

Someone might think that if something is not random, it is most likely planned.  However, I do not think this child's actions were planned.  Planning has the connotation of being linear along with the idea of causation.  In the three videos, I would be hard pressed to say why he moved sticks one time and pellets the other two times.  And did using one plunger naturally lead to using two plungers?  At what point did he decide to reverse plunge?

I am left with the question: If children's actions are not random, nor are they planned, then what is left?