The first apparatus I began using was something I did not have to buy or build. Twenty years ago a mom of one of the children in my classroom brought in a 5 gallon plastic pail. She worked at a fast food restaurant which apparently used a lot of dill pickles. She asked me if I could use it. I said sure not really knowing what I would use it for. I put the pail next to the sensory table. I began to observe children taking the sand from the table and dumping it in the bucket. I quickly realized that children had this innate need to transport whatever was in the table to somewhere else and vice versa.


Here are two main reasons for putting a separate container next to the table.  1) You are providing an opportunity for children to do what they have an inner drive to do, namely, to transport.  2) In the process of transporting, you create an opportunity for positive rather than negative communication between you and the child.  Instead of "no, no, no, not on the floor" you can now say "put the sand in the bucket." You have now given the child a constructive alternative to what was originally perceived as a negative action.
Let me give you a concrete example. Last year a parent and her child were at the sensory table. The child was transporting the sand around the table and spilling it on the floor in the process. Mom kept saying: "No, not on the floor." I aksed the mom to tell her child to pour it in the bucket. She did and the child dumped the sand in the bucket. Three things immediately changed: 1) Mom relaxed; 2) Mom had a satisfied look that her child did what she asked; and 3) The sense of agency the child felt from doing something constructive was palpable.
If you take nothing else from this blog, take this: Put a pail, bucket, or large container next to your sensory table. Hardware stores have them for less than $5---or maybe you know someone in the food industry that can round you up a bucket.

Play and Learning at the Sensorimotor Table 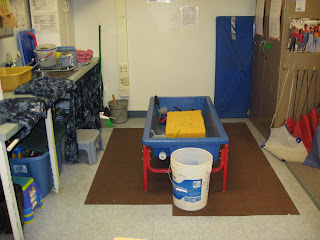 THE SETUP
The sensory table is in a space that is 8' x 6.5'. The space is enclosed on three sides: a cabinet on the right with smocks; wall in the back; and sink and counter on the left. The sink next to the area is important because sensorimotor play tends to be messy. The sand and materials used in the table are stored under the counter behind curtains to allow for easy access. There is mat under the table to protect the floor. The table itself is very simple.  It is basicallly a tub on legs.  It is 50" long and is adjustable. It is set on the lowest setting: 17.5" off the ground.   The simplicity of the table has proven to be an ideal foundation for me to build and create.