RUMINATIONS ON A TRAY

Two weeks ago I wrote a post called Ruminations on a Bucket.  A simple, five-gallon bucket had a profound effect on my practice and the flow of activity in my classroom.  The bucket provided a constructive outlet for children to transport the sand from the sensory table to somewhere else. By having a constructive outlet for their inner drive to transport, the children managed many of their operations, either communally or alone, with focused engagement leaving me more time to observe, instead of manage, the children's behavior.

This week let me introduce a second apparatus that shapes what I offer in the sensory table.  In addition, it has changed how I perceive children's play at the table.   The apparatus is a wooden tray that spans the width of the table creating a play zone above the table.  The tray is a simple construction from scrap wood I found in the shed. There is a 1" x 10" base with 1" x 4" pieces nailed in place to form the sides.  The seams are caulked and the whole thing painted.  I did have to drill holes in the sides so water could drip back into the table preventing any potential overflow. 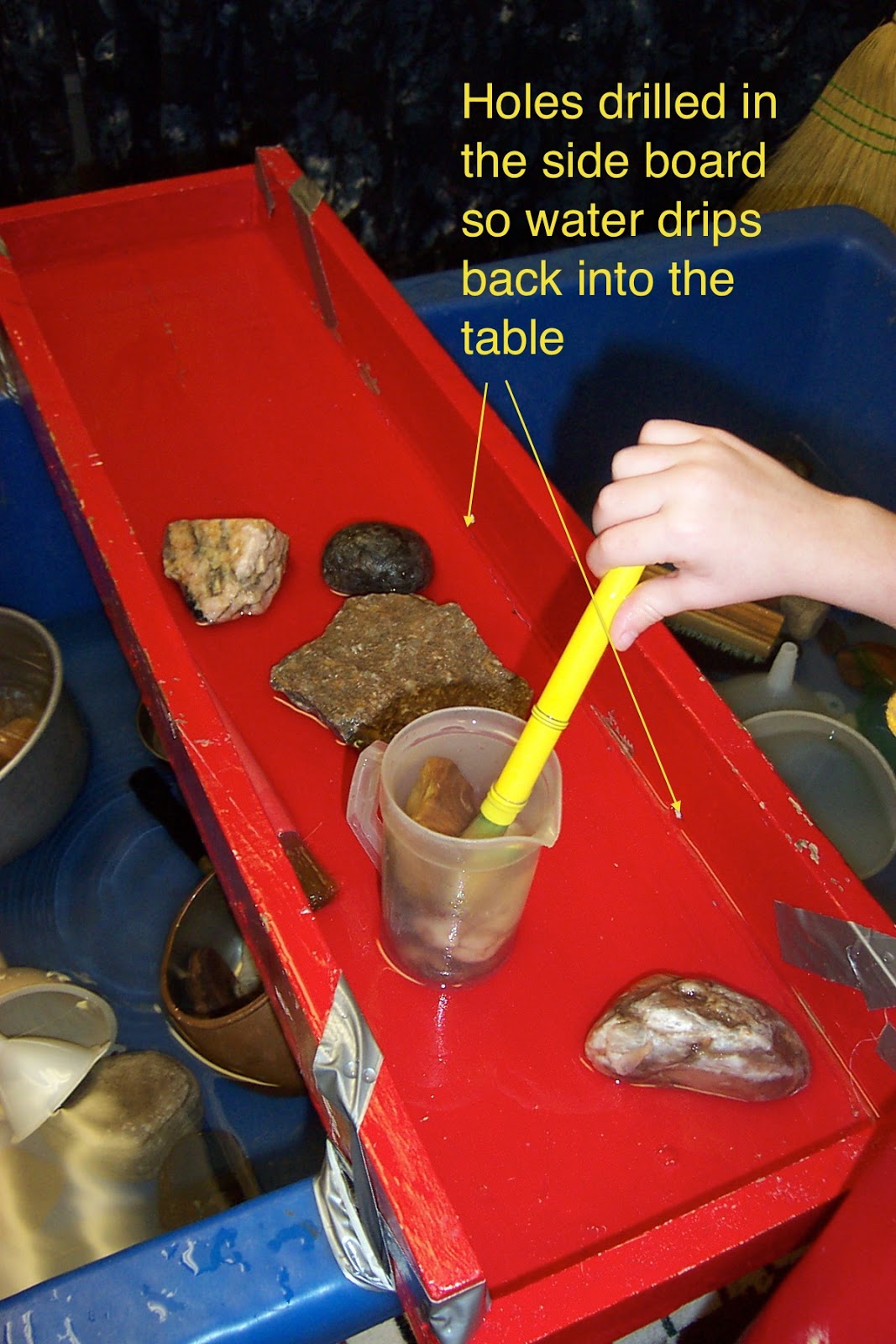 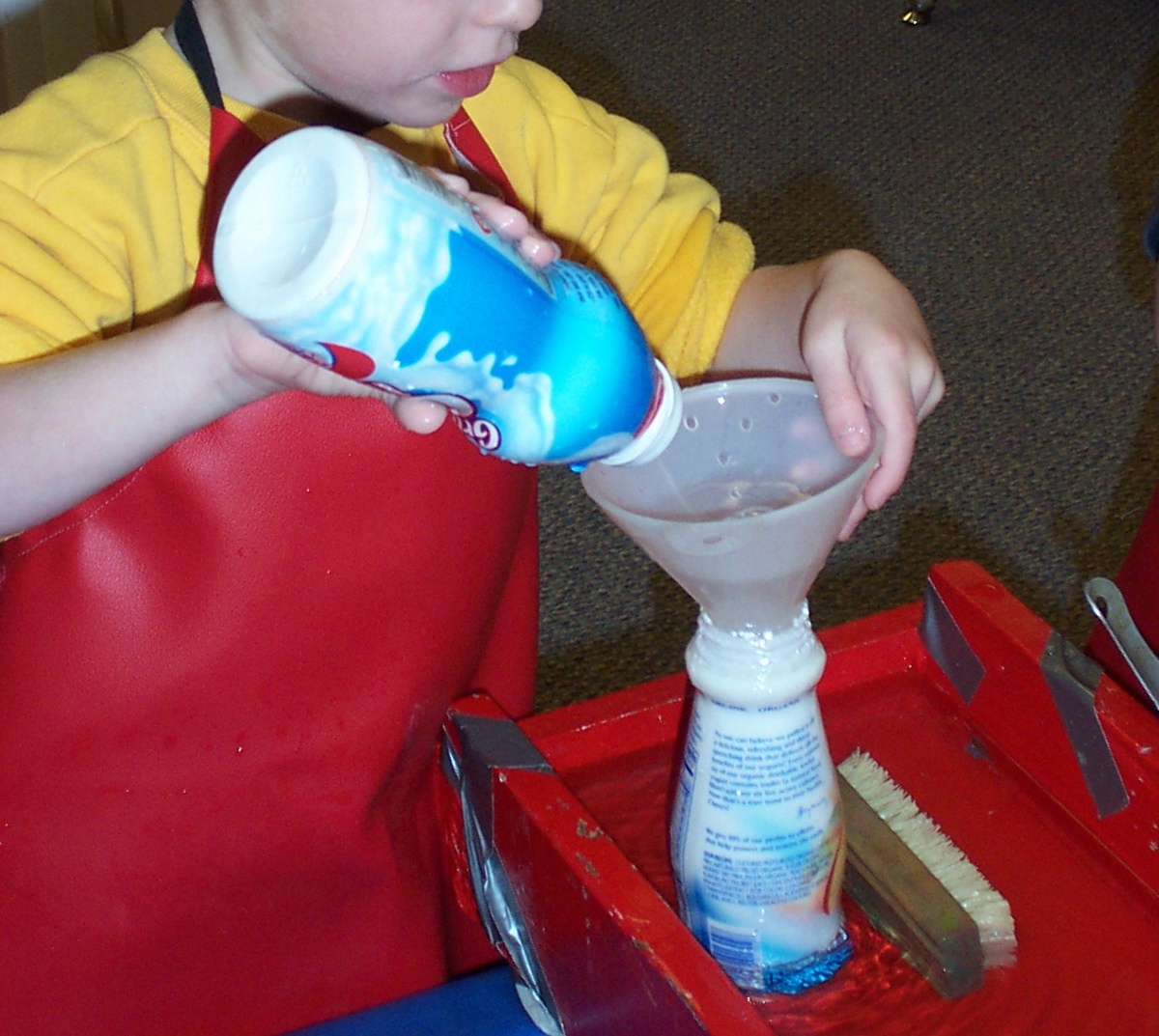 Did it work?  Yes, sometimes, like in these two pictures. Instead of holding the container against their chest, these two children chose to place the container in the tray and to pour hands-free.  Notice the child on the left is overfilling his container---but none is going in his shoes.


As I watched the children play using the tray with different types of medium such as moon sand, 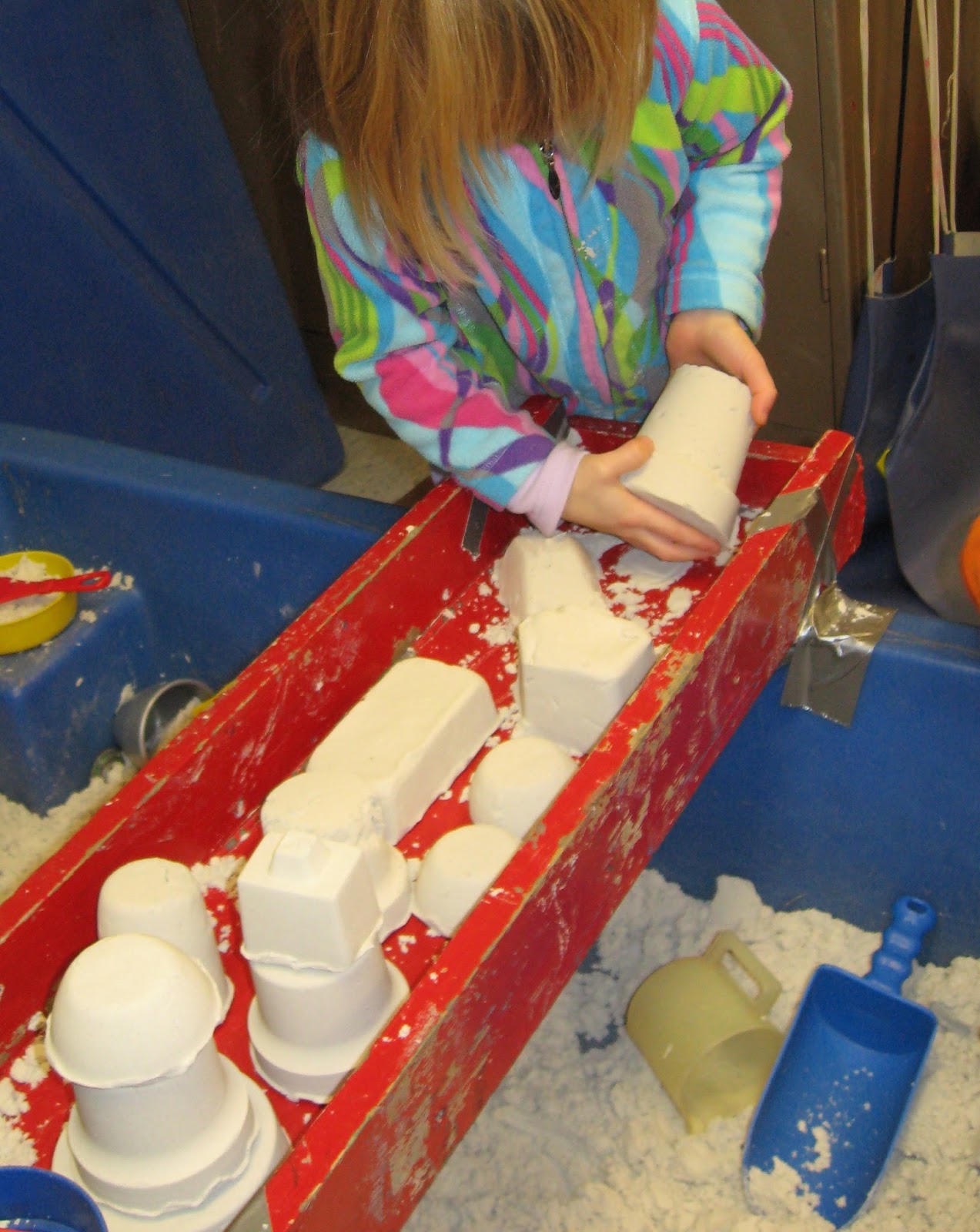 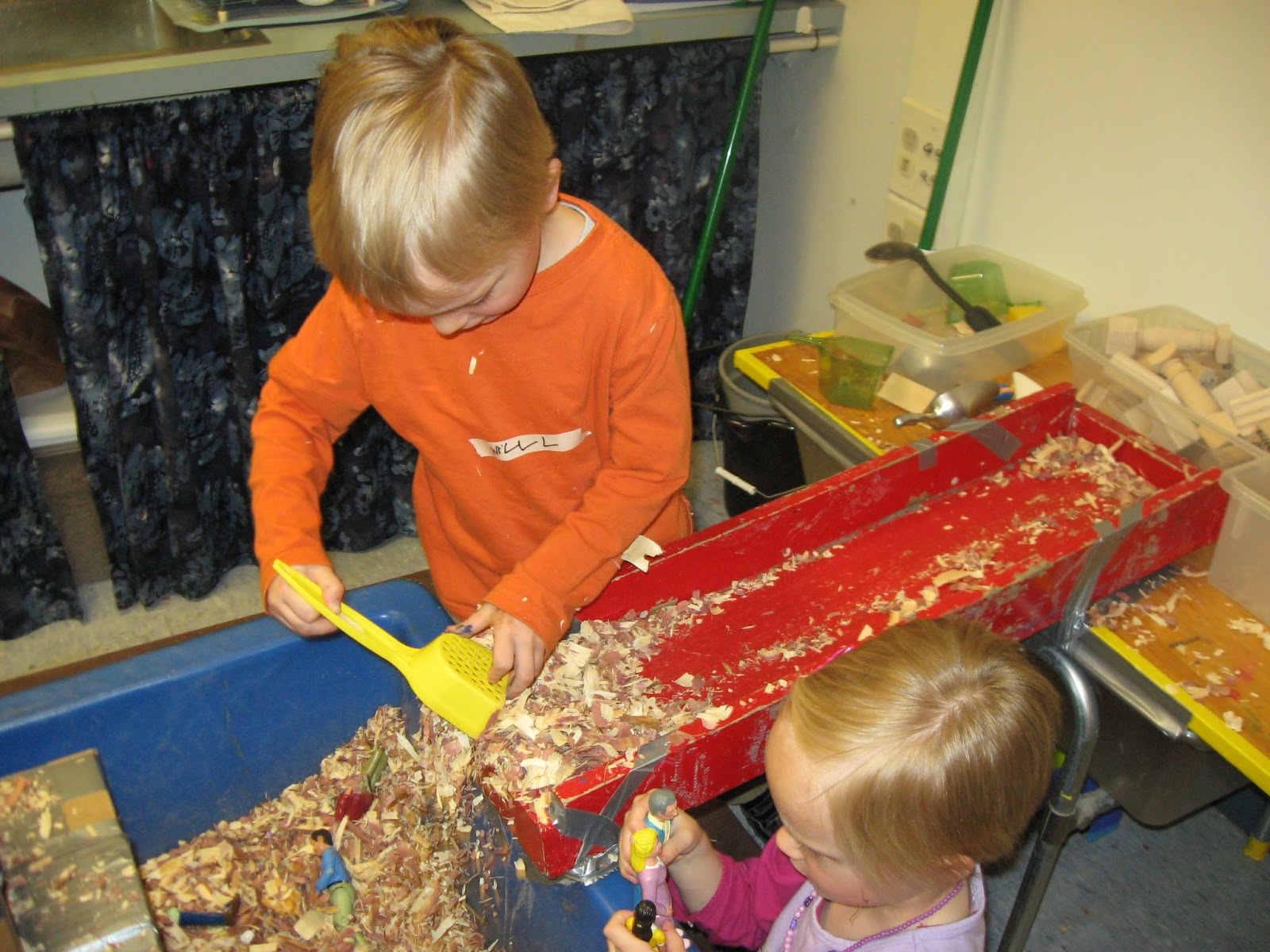 Sometime during the course of my observations, I found a different type of tray.  I was walking through the hardware store in the clearance section one Fall when I saw two planter trays that I thought I could somehow use in the sensory table.  As luck would have it, they fit perfectly into the table.  The lips of the planter trays rested nicely on the lip of the sensory table. 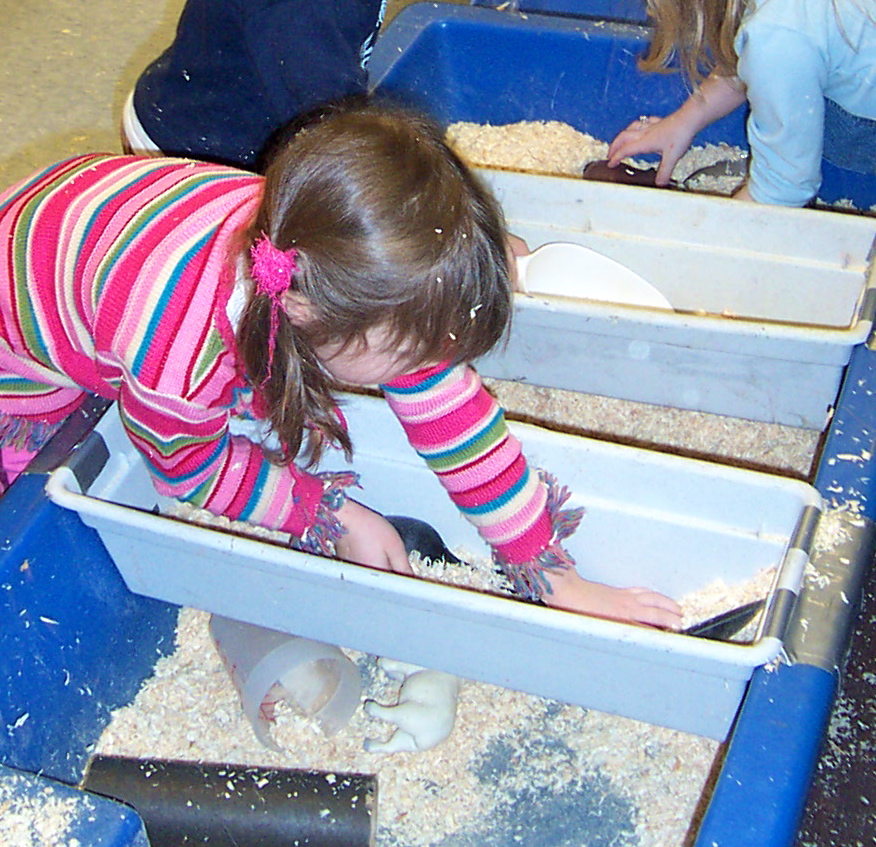 I also came across several more trays in our storage area at school.  Since levels seemed to be an attractive element for the children, I decided to build a multilevel tray apparatus. 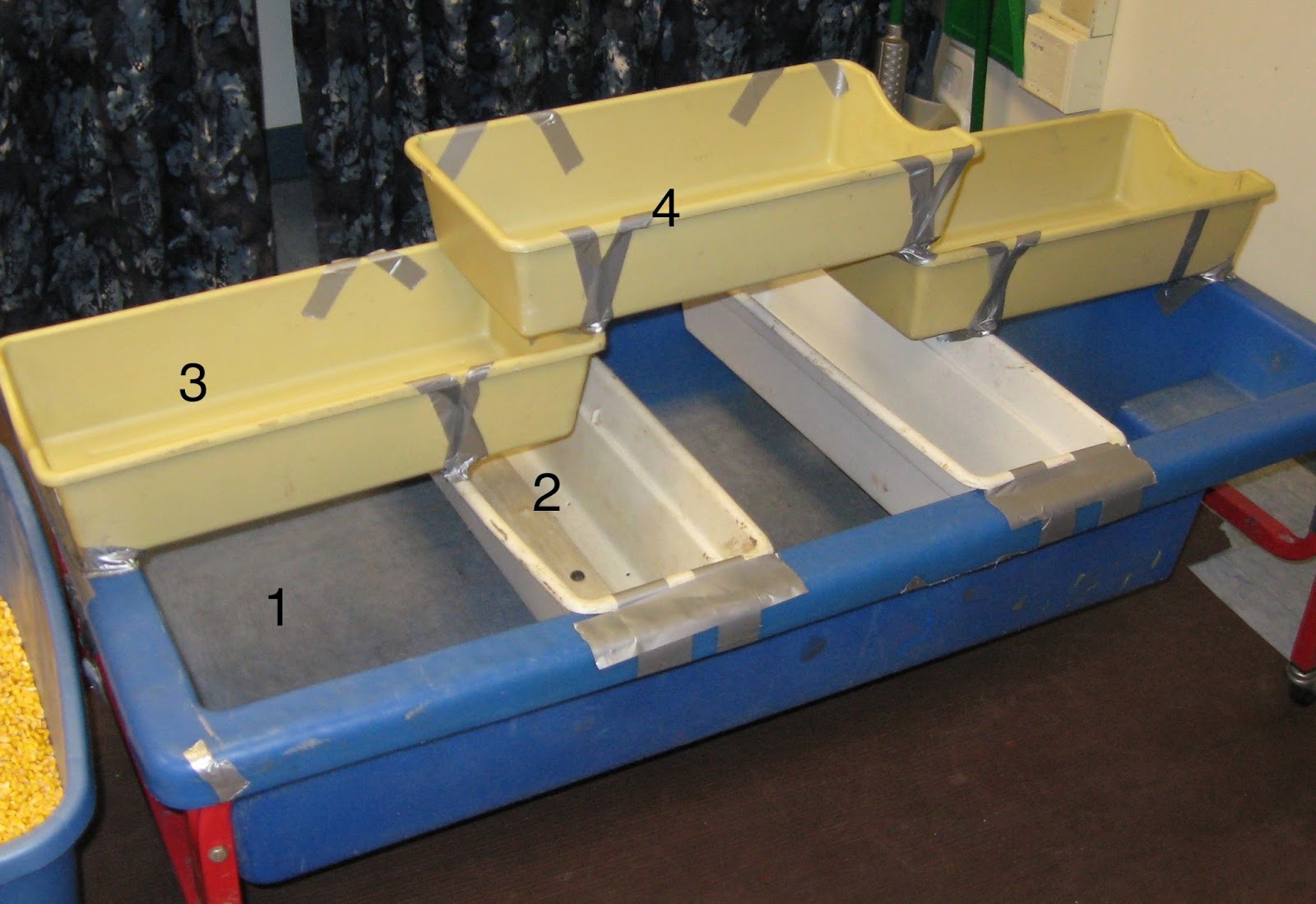 As you can guess, the children continually moved the medium from one level to another with abandon. 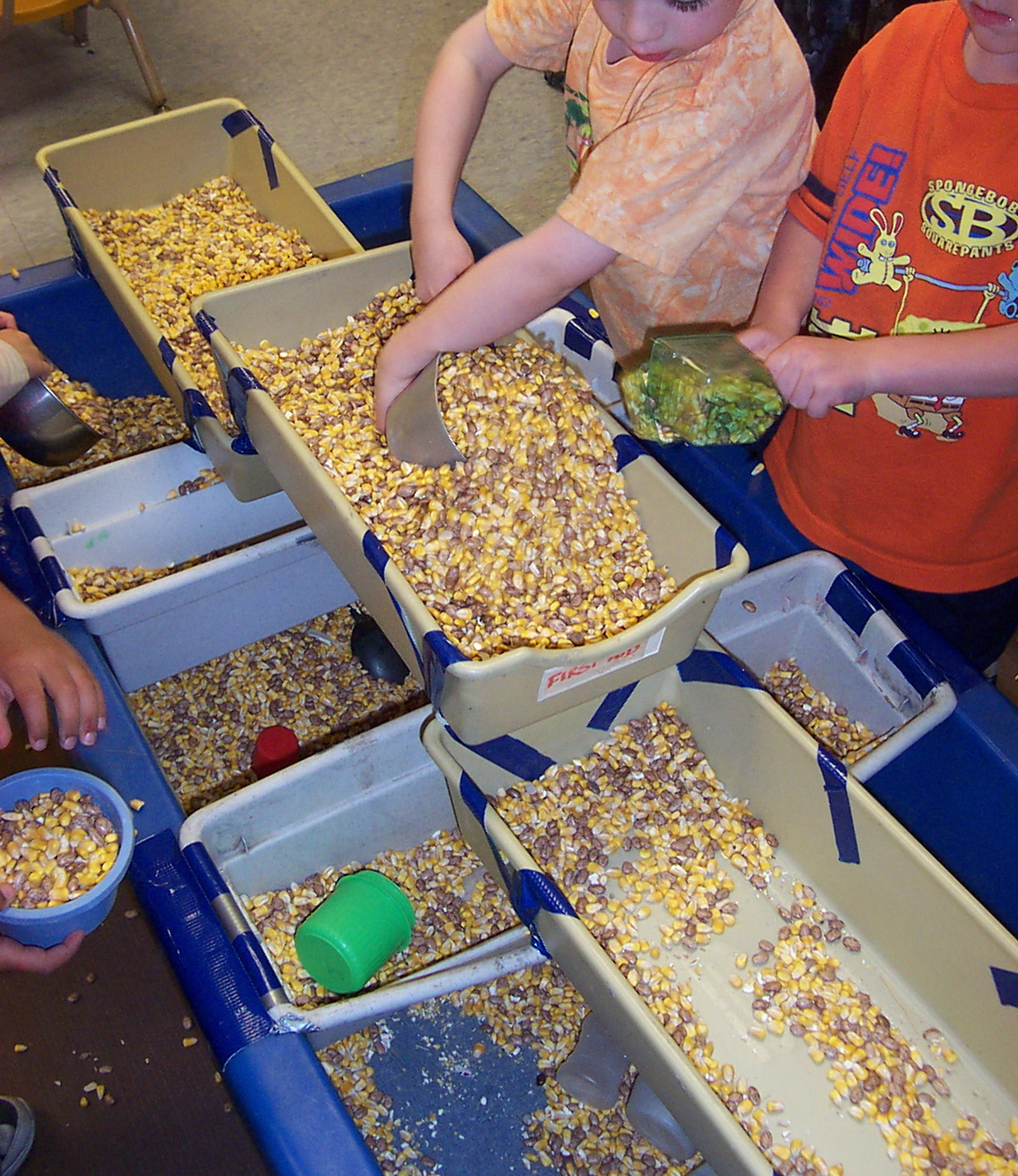 I do not know what the attraction is about levels.  I think part of it is that children are constructively transporting from one space to another.  Other than that, your guess is as good as mine.  I do know that the children will find every level and use every level in their play and exploration.  (See axiom #3 on the right-hand column of this blog.)

When you think in terms of levels, then, you realize that the original bucket also creates another level. For all intents and purposes, the level created by the bottom of the bucket is the floor. Believe it or not, children like to use the floor, so why not make it a constructive option?

BUCKETS AND PAILS AND TUBS, OH MY!

Last week's post was called Ruminations on a Bucket.   Twenty-five years ago I realized that by placing a bucket next to the sand table, children demonstrated an overarching need to transport the sand from the table into the bucket.  (They had been telling me all along, but without the constructive outlet---the bucket---to fulfill their need, I only saw children dumping the sand on the floor.)  From watching the children move the sand from the table to the bucket, I formulated axiom #1: Children need to transport whatever is in the table out of the table.  (You can see the axioms in the right-hand column of this blog.) 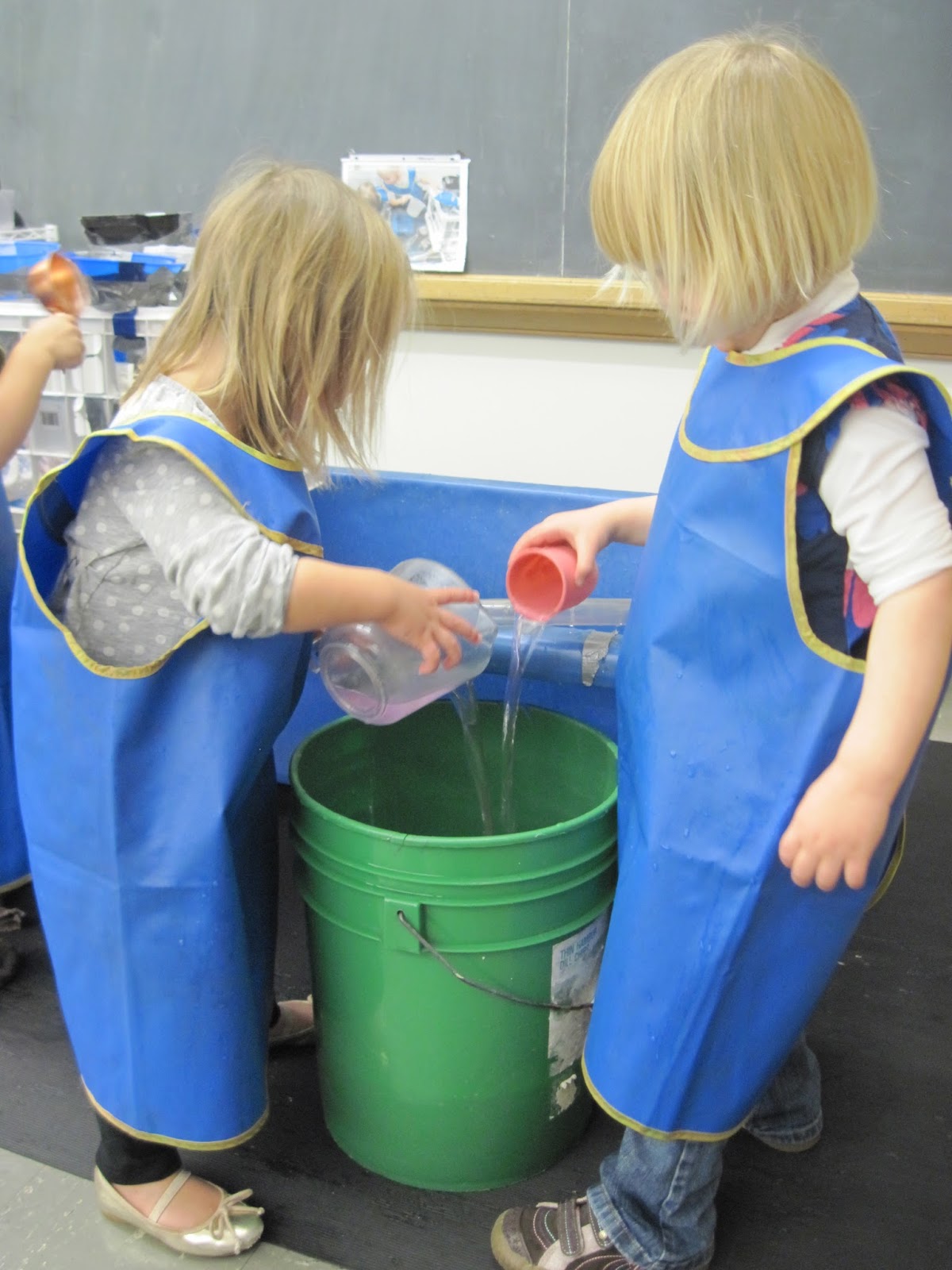 If that is the case, I propose that there are countless variations on the bucket.  In other words, there is a multitudinous assortment of receptacles to receive what the children need to transport out of the table. Below is just a smattering of possibilities.

A bucket that used to hold kitty litter. 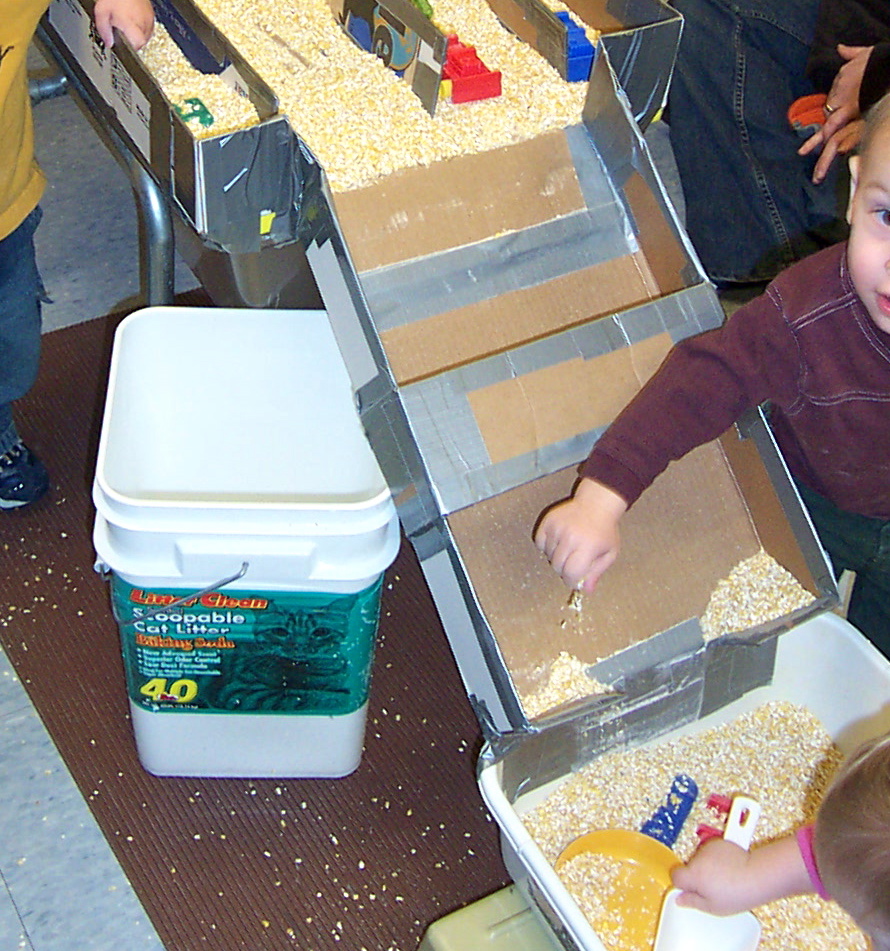 A plastic garbage can 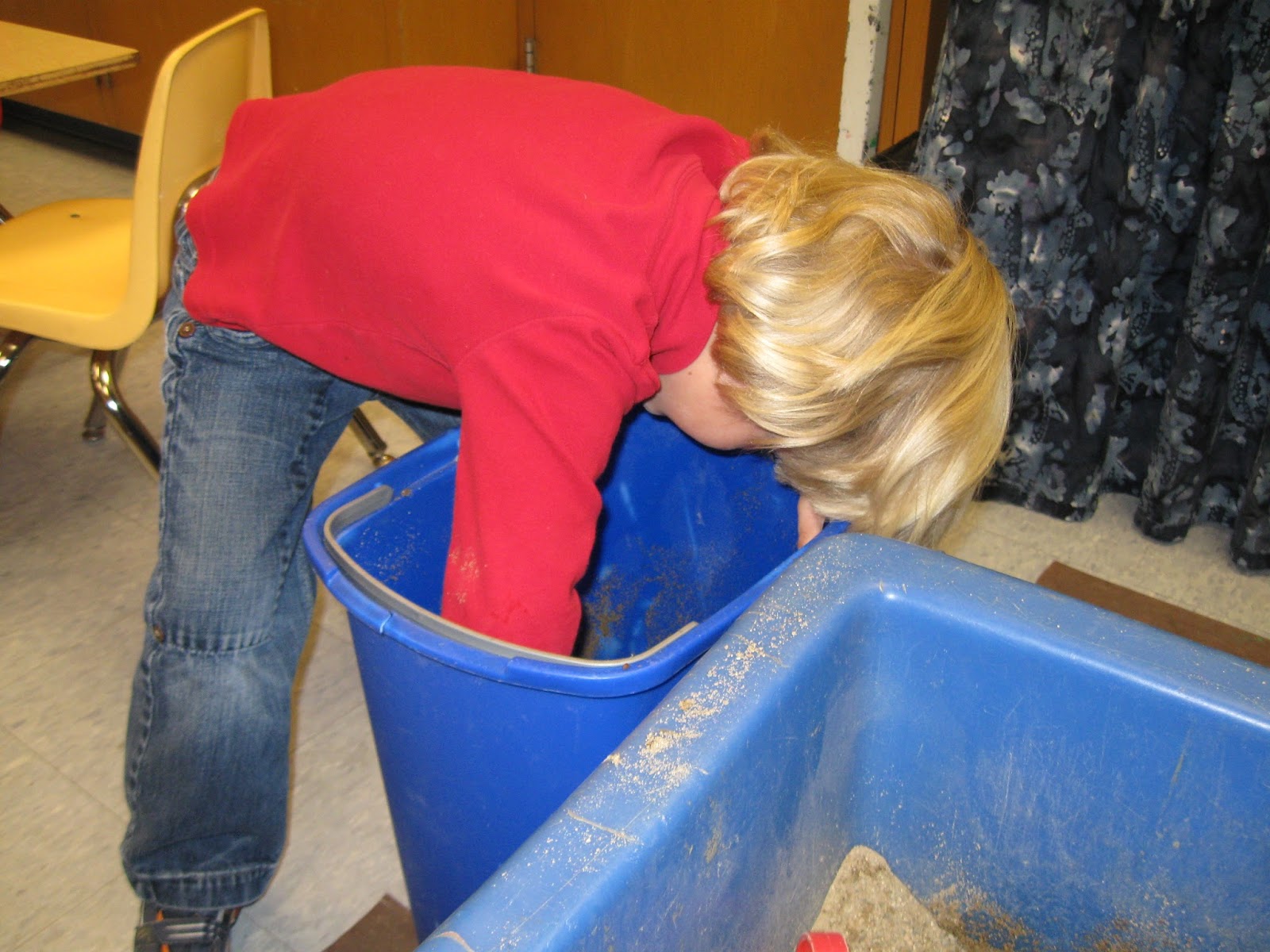 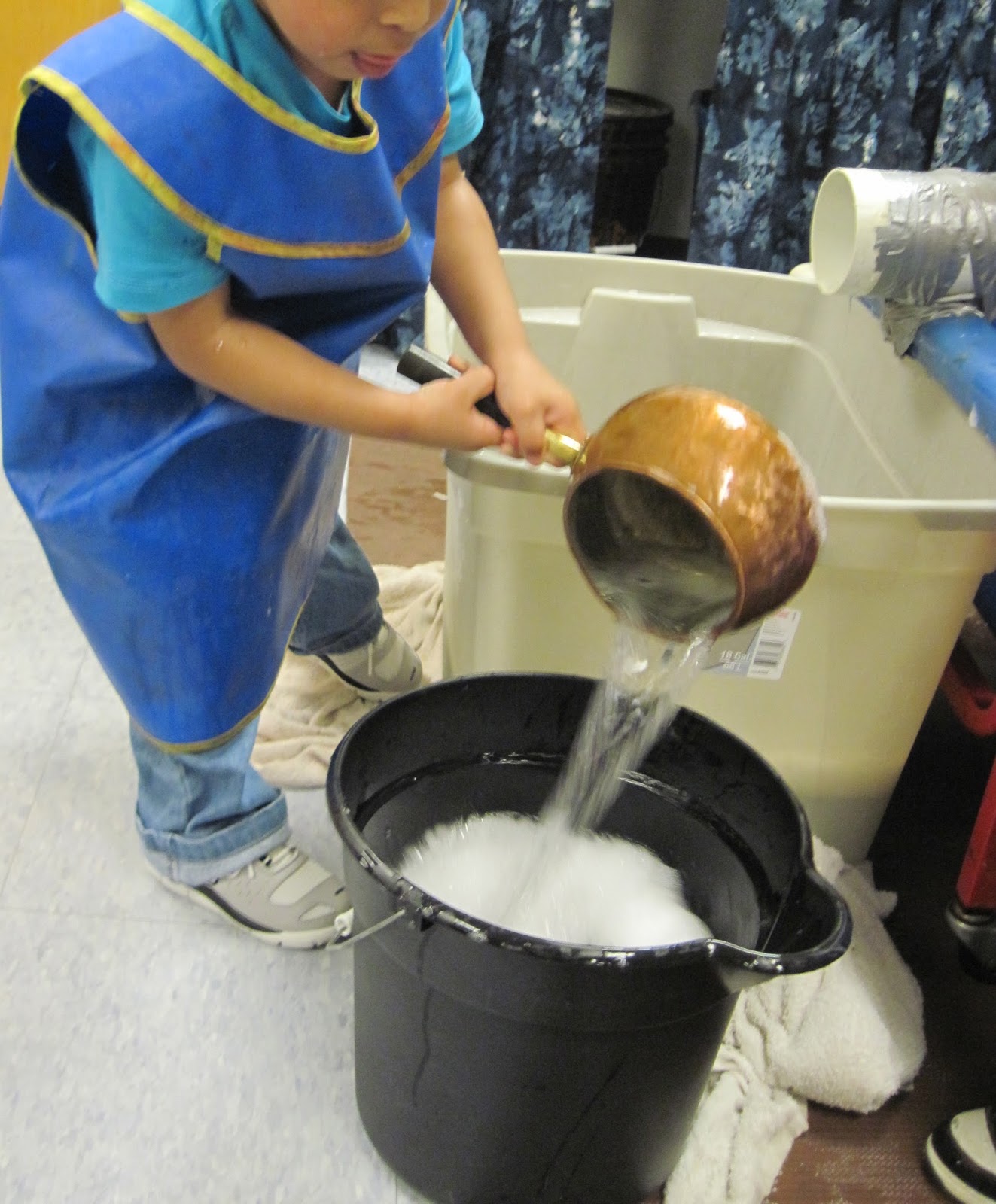 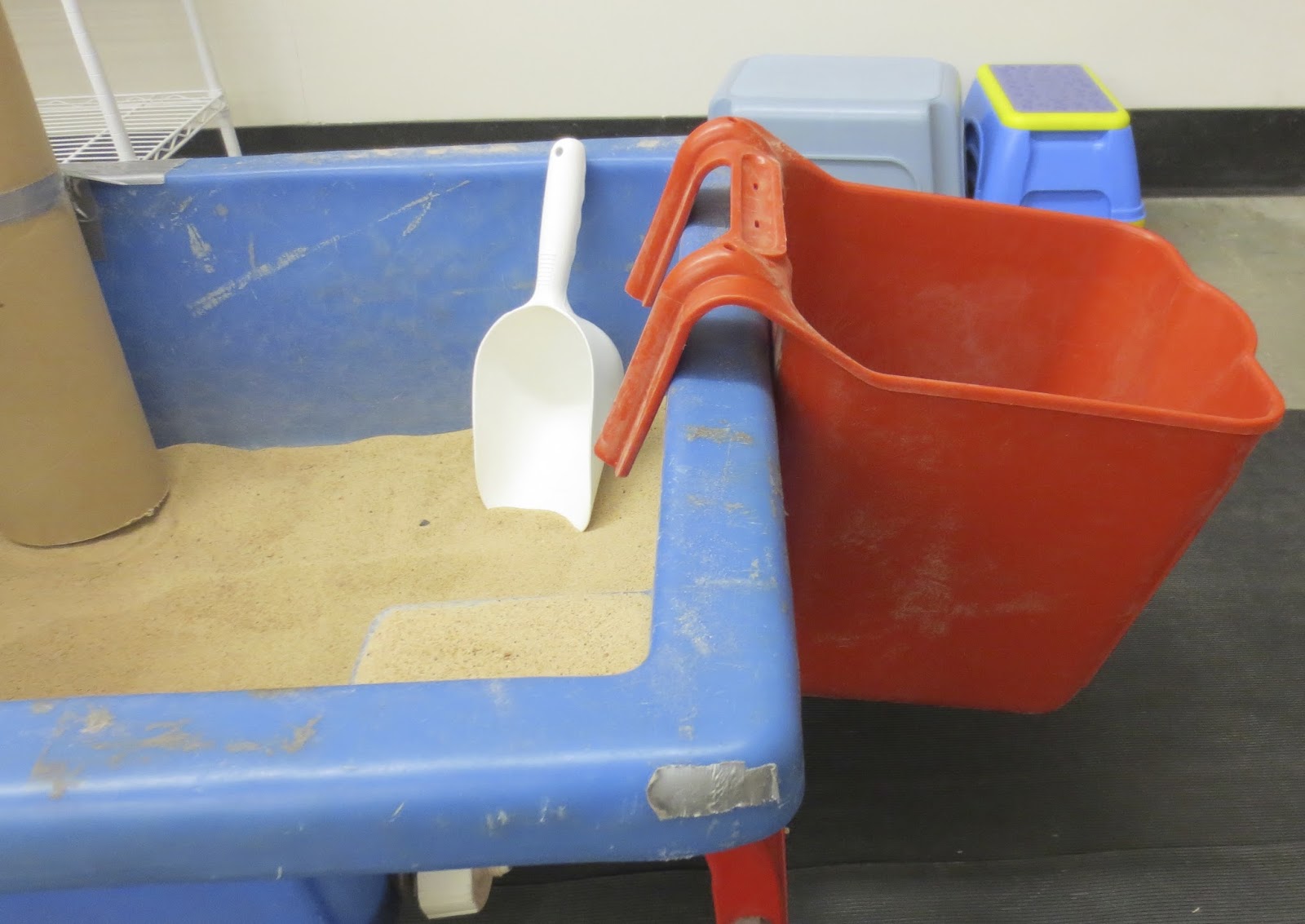 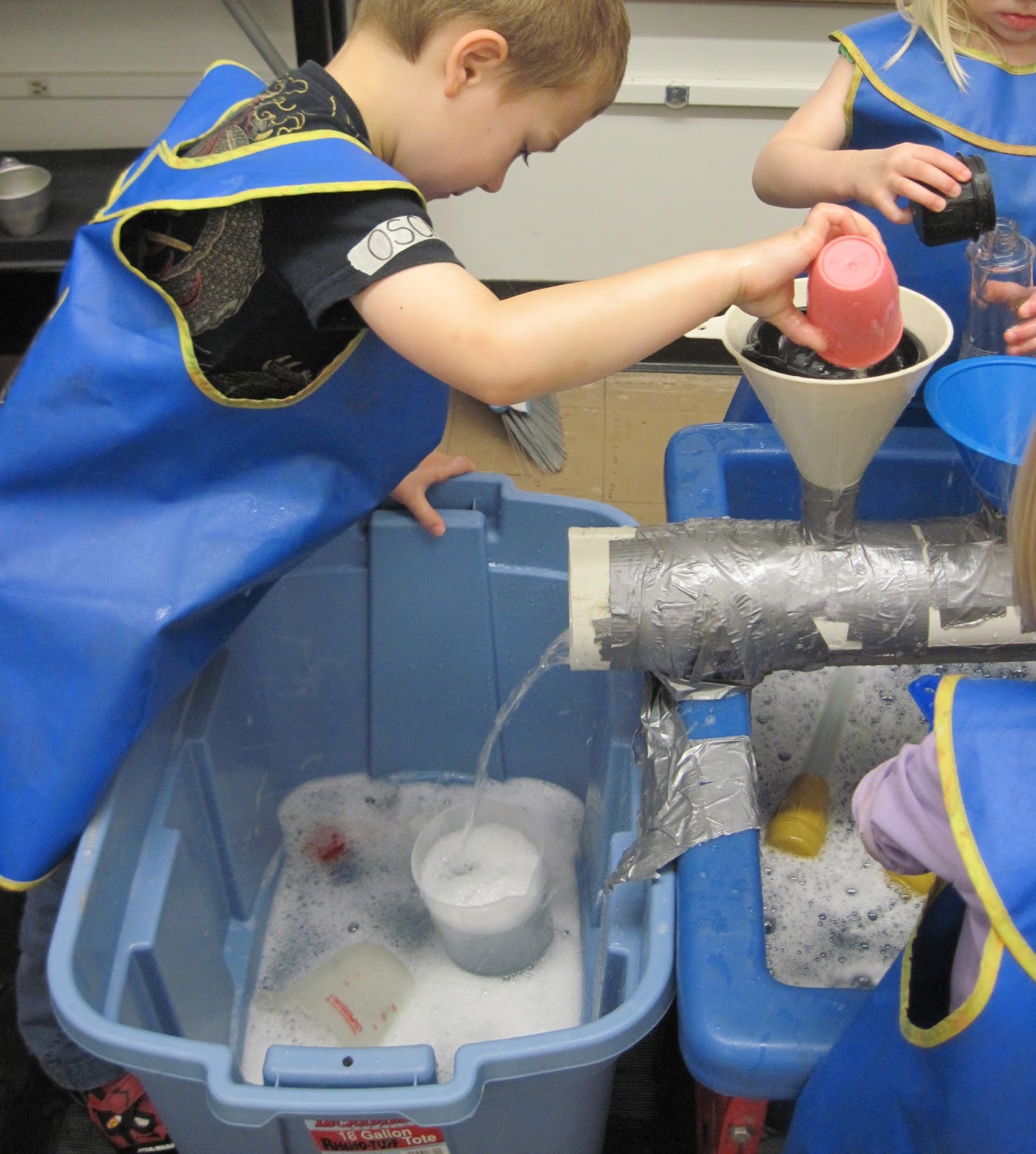 How about a box? 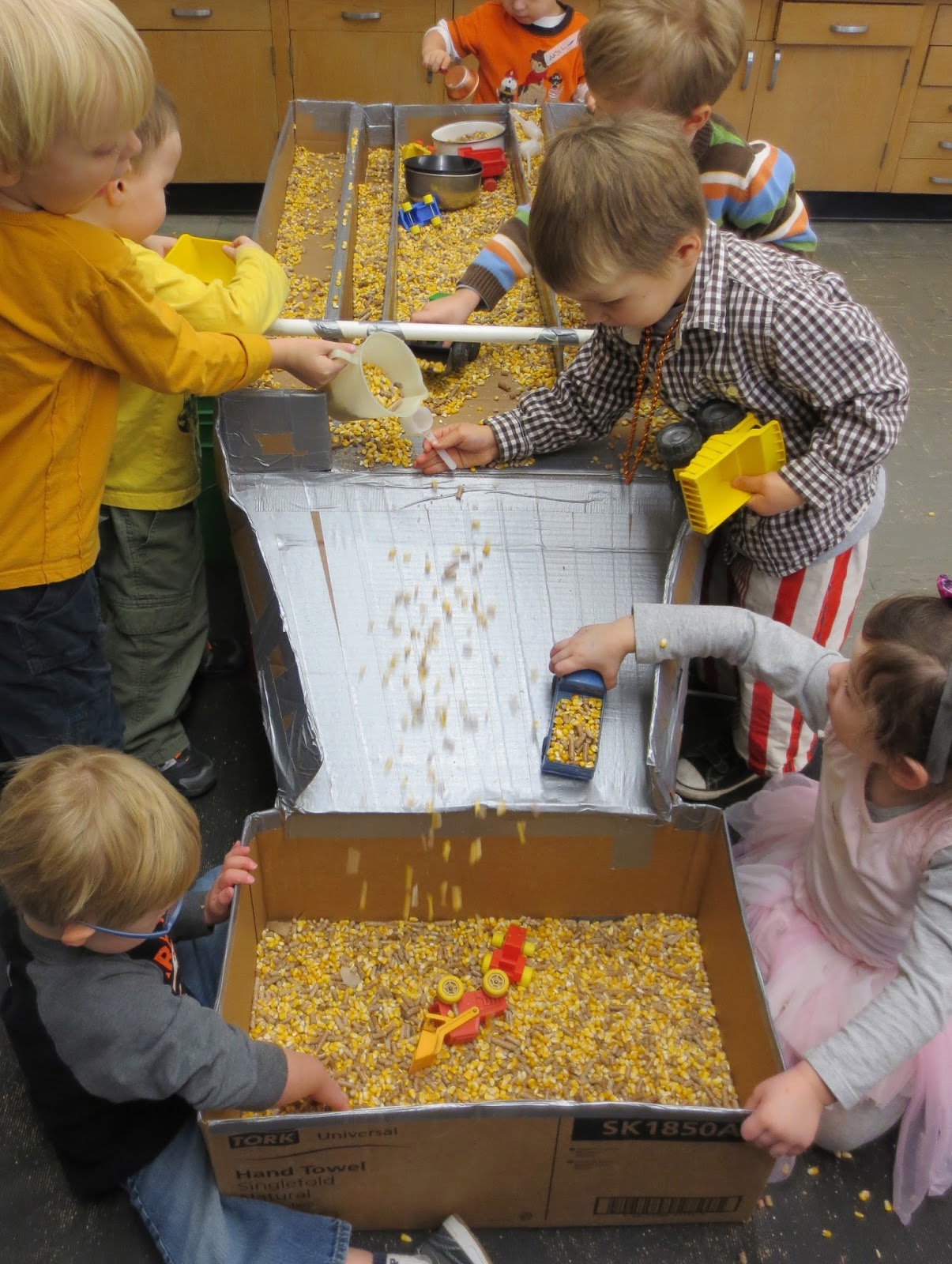 (I would not recommend this with water)

Or even a very large box? 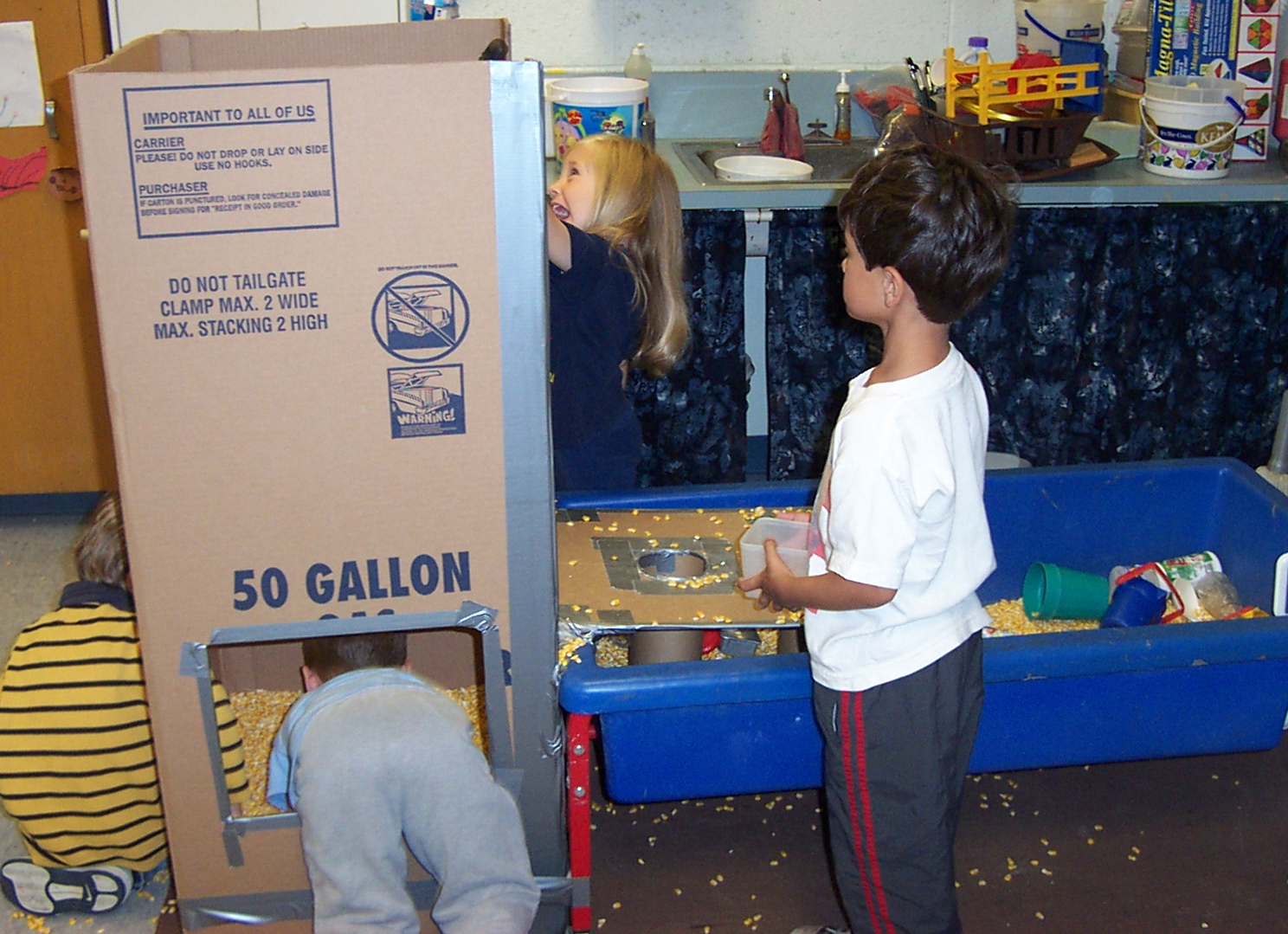 In addition, children will create or find their own receptacles. 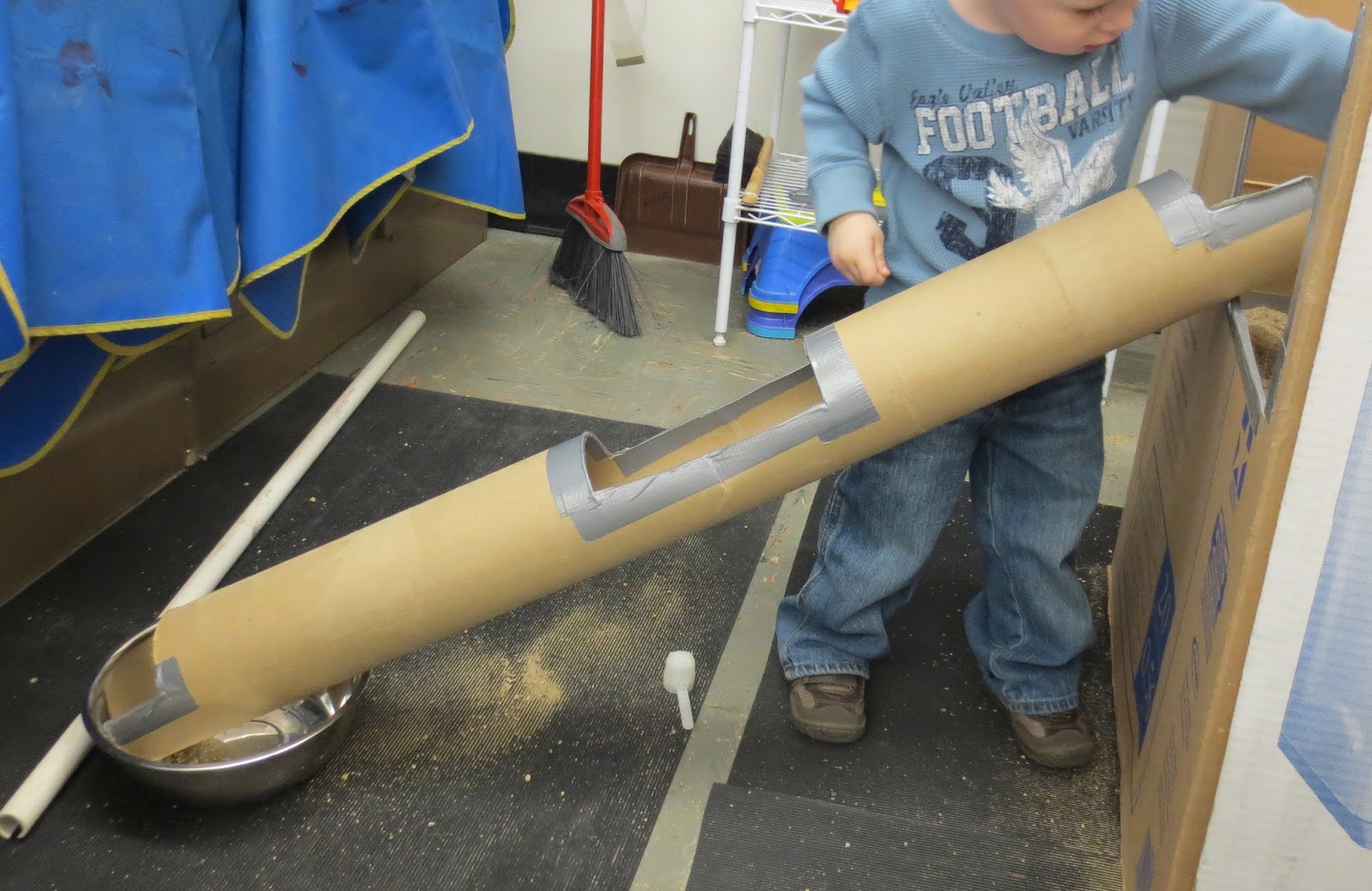 And there are none too small. 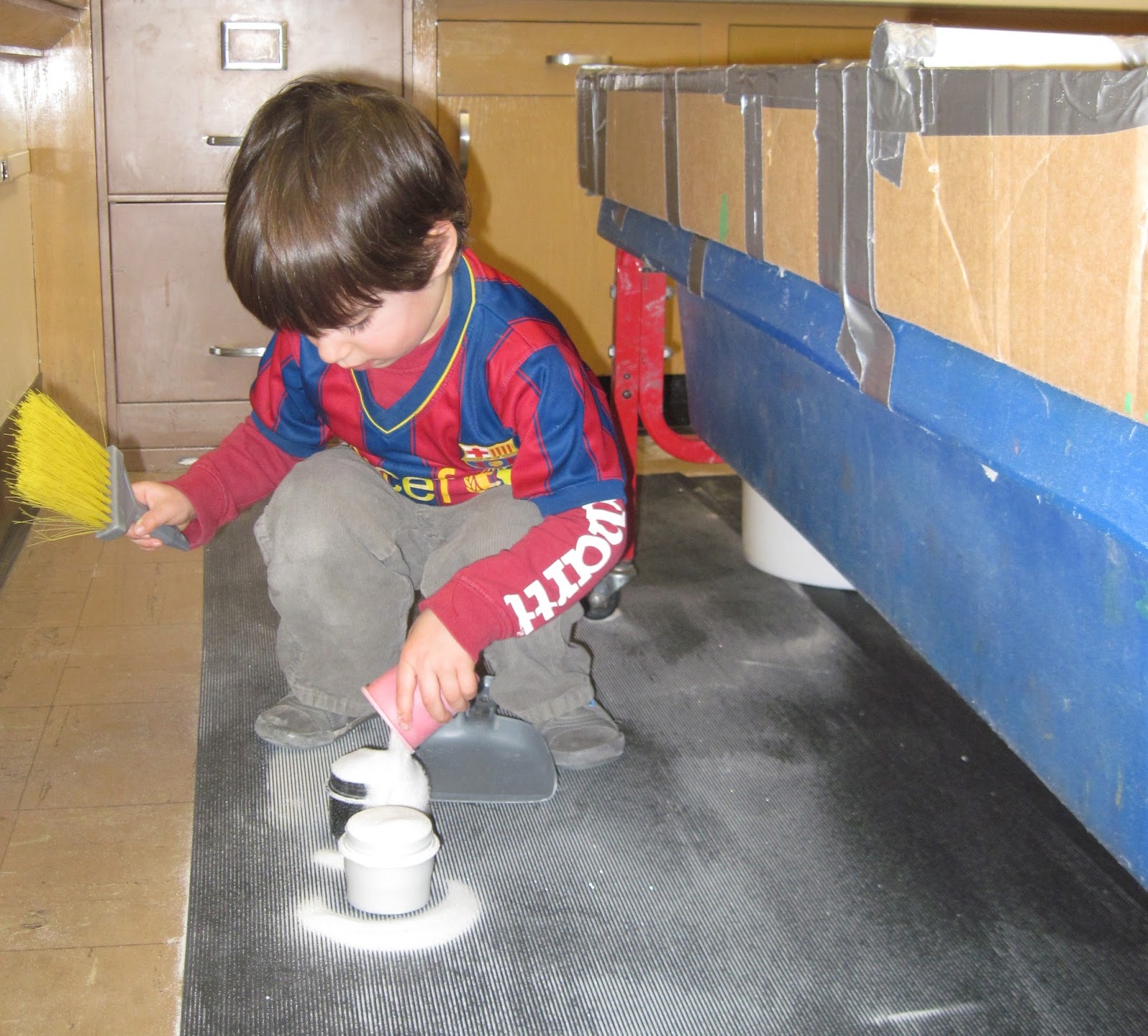 A curious thing happens with multitudinous receptacles; they take on multiple functions.

The bucket can be a little fishing hole 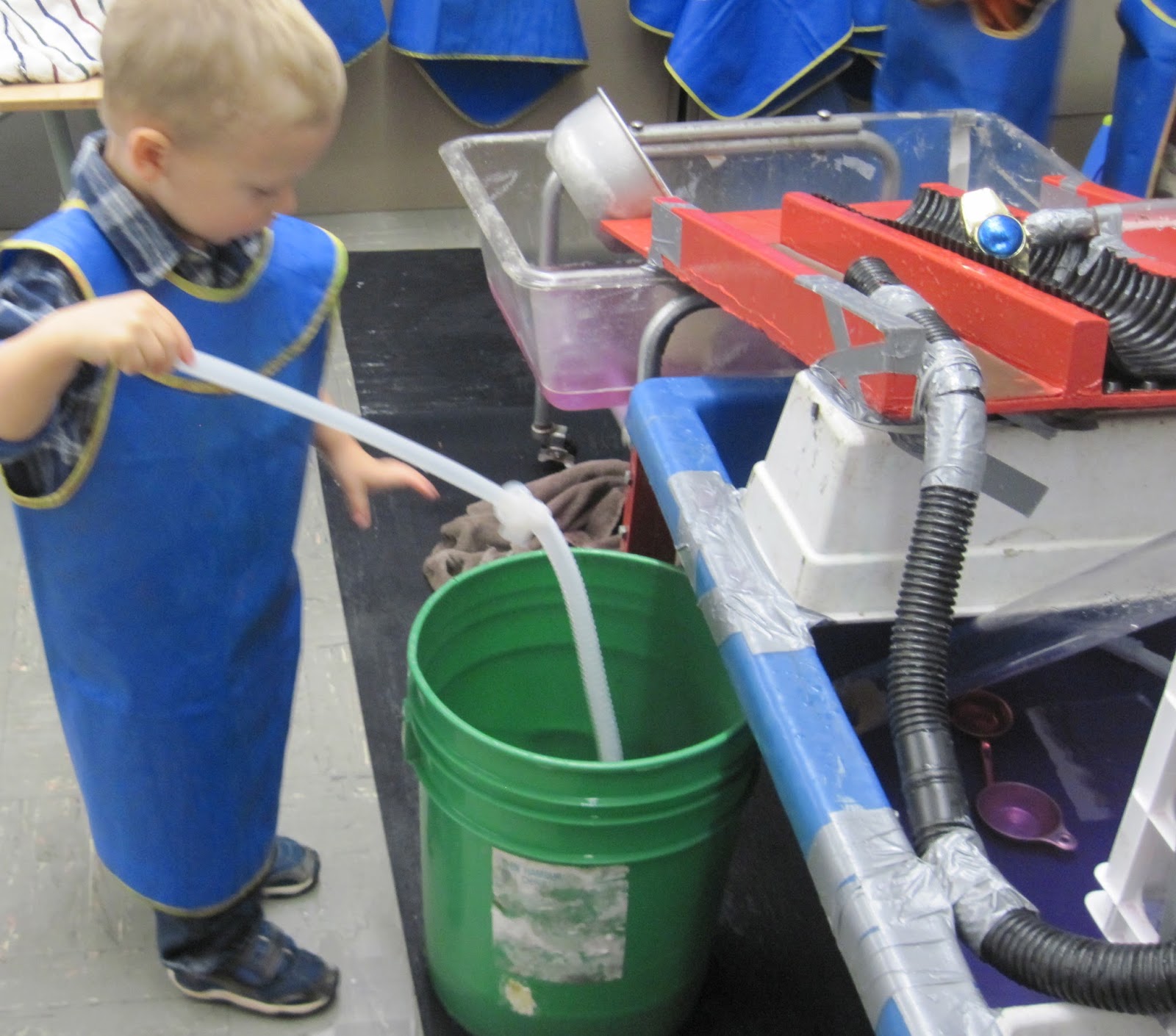 Or a platform for building a stick & gem structure. 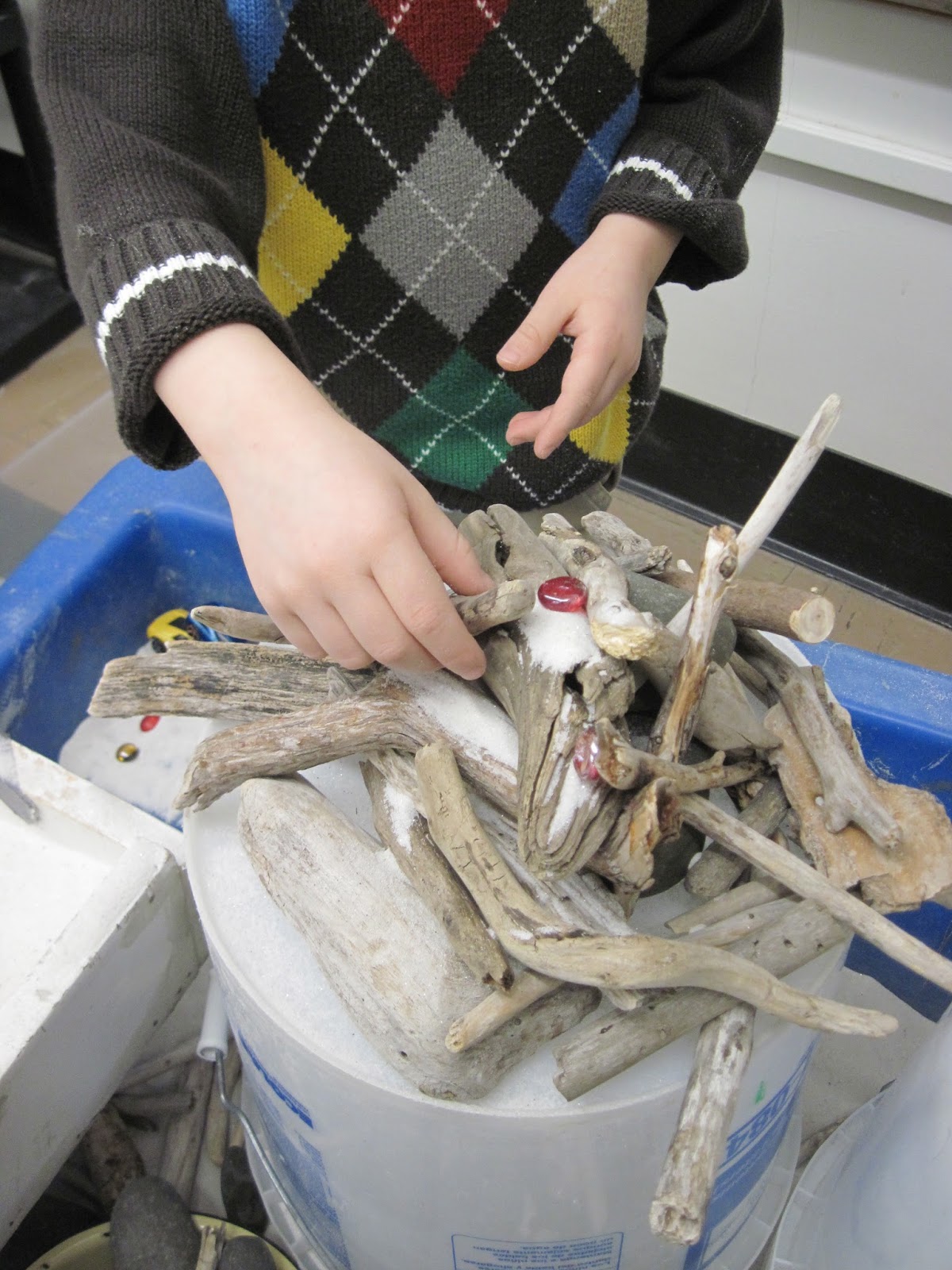 The structural hole on the animal feeding bucket is an invitation to explore. 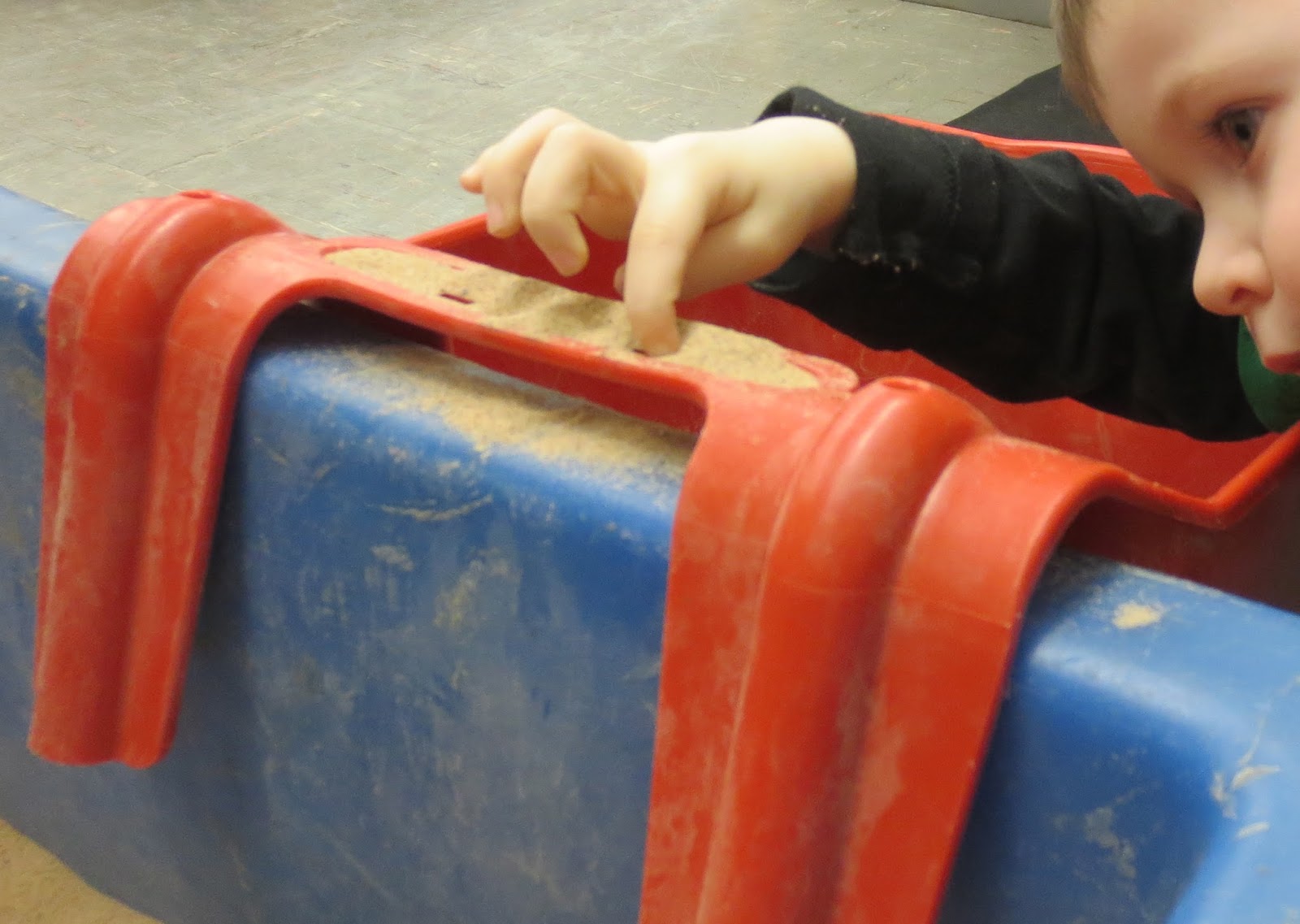 The lip of the tub is a place to hang a measuring cup. 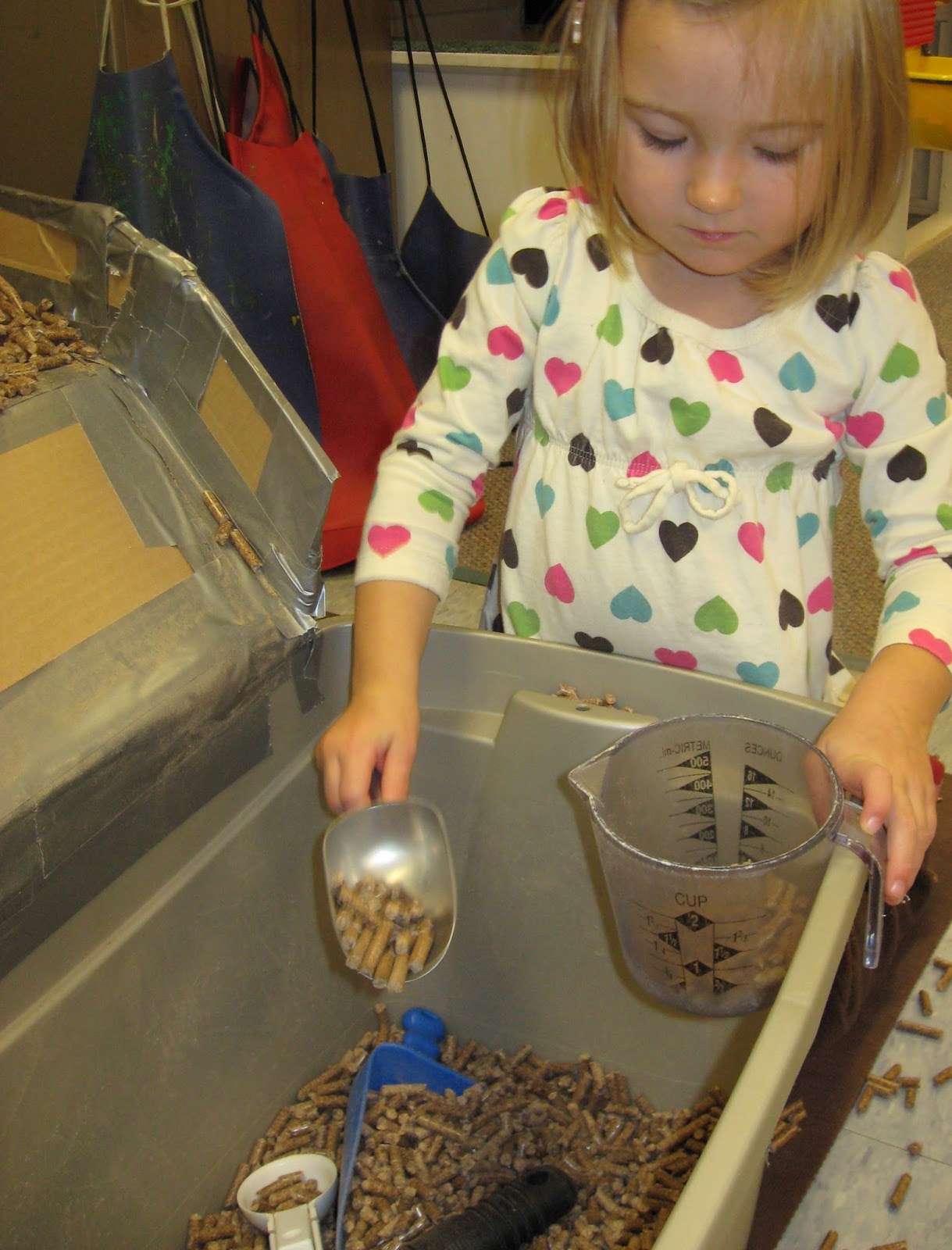 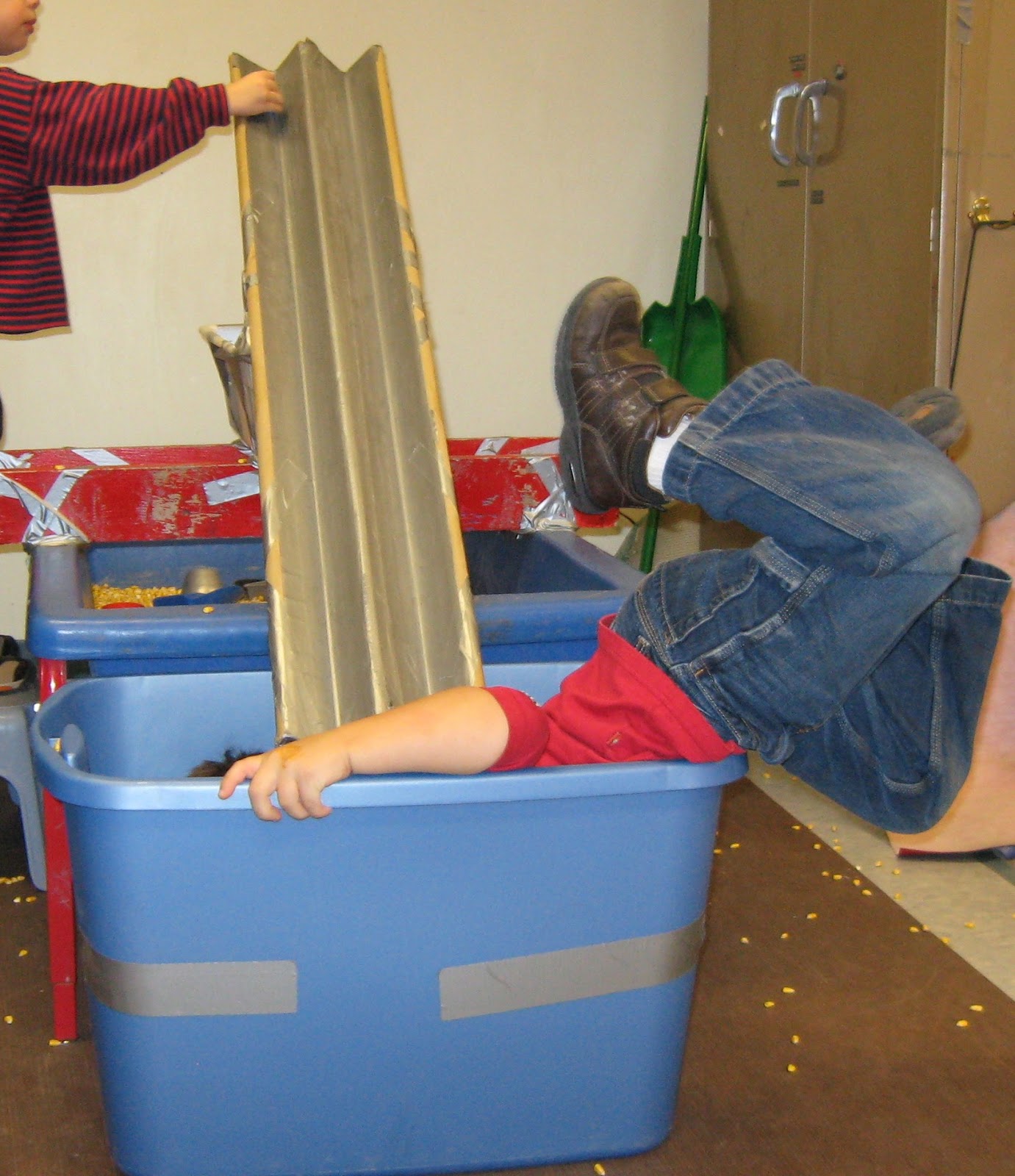 How about transporting your whole body into the container? 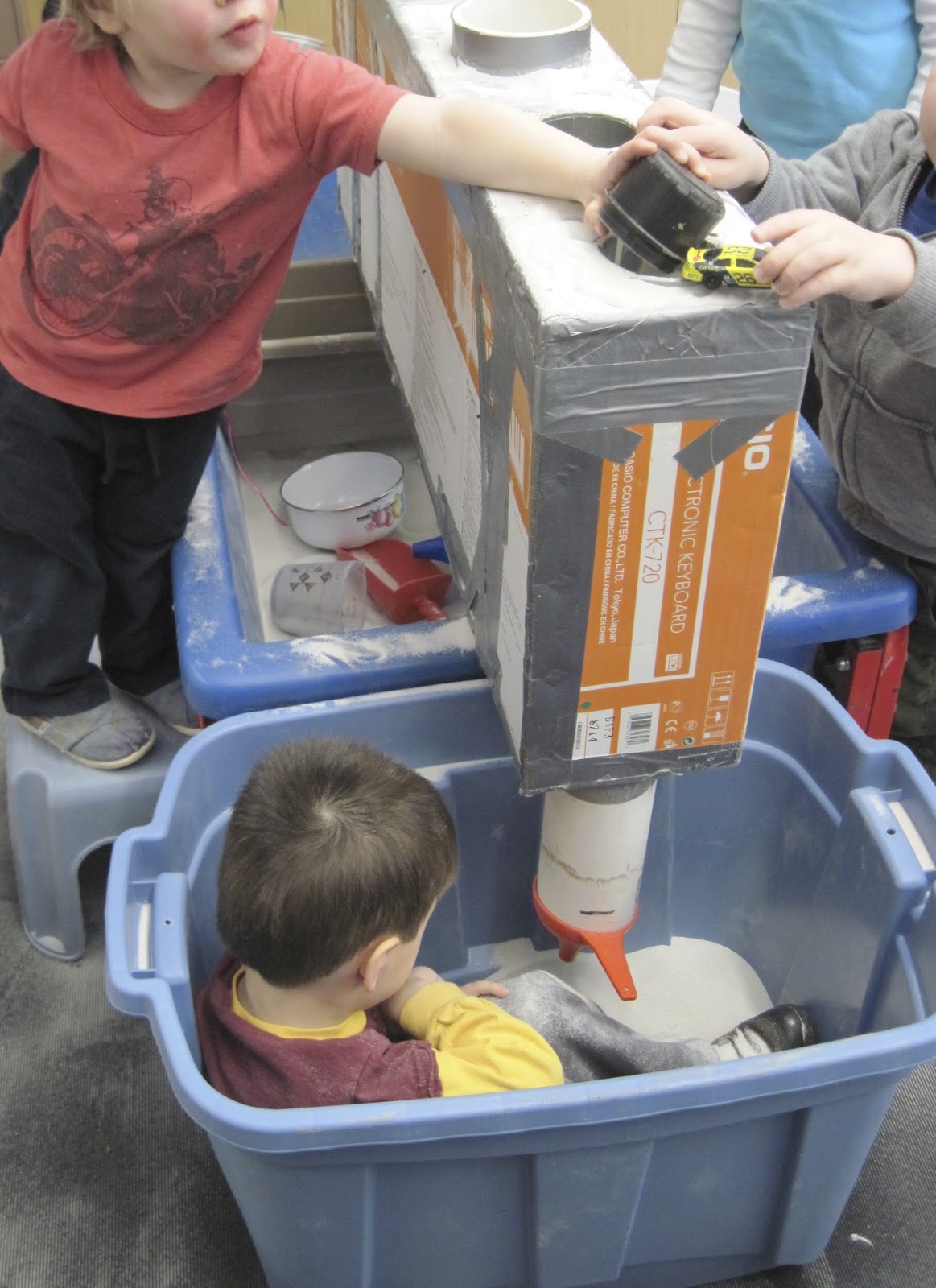 Why not invite a friend?  Now that would be fun. 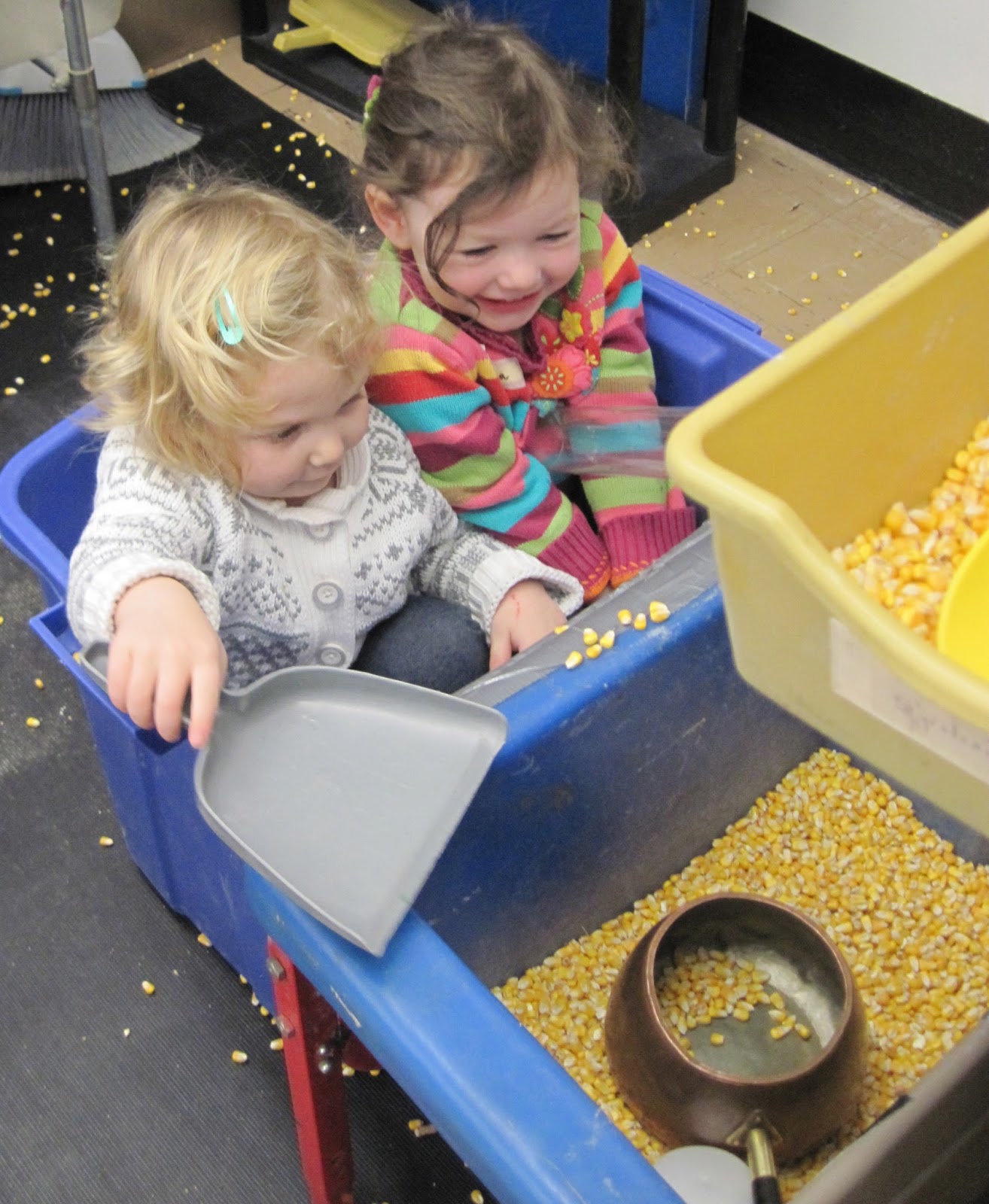 I must thank you for indulging me in a little playful tomfoolery.  I really had fun putting the pictures together for this post.  It brought back fond memories of finding the children engaged with more than just the apparatus.  There is no area of the table that goes unexplored or unused.  Some of the uses of the containers are quite predictable such as pouring or dropping stuff in.  As you just saw, though, there are plenty that are unpredictable.  And the unpredictable moments make children's determined work so seriously fun.  I am serious!

P.S.  I must apologize for those of you in Kansas City who are going to the CECA conference.  I was scheduled to do six sessions, but I had emergency surgery last Sunday so I am unable to travel.  My next presentation will be at the NAEYC national conference in Washington DC in November.  Maybe I will catch you there.

RUMINATIONS ON A BUCKET

Three years ago, I started blogging about the apparatus I build for the sand and water table in my preschool classroom.  In this post, I would like to reflect back on why I started building in the first place.  To do that, I need to go back to the very first apparatus I used at the sensory table. Interestingly enough, it was not an actual building project.  Rather, my first apparatus was a donation from a parent.  Twenty five years ago a mom brought in a big green bucket. 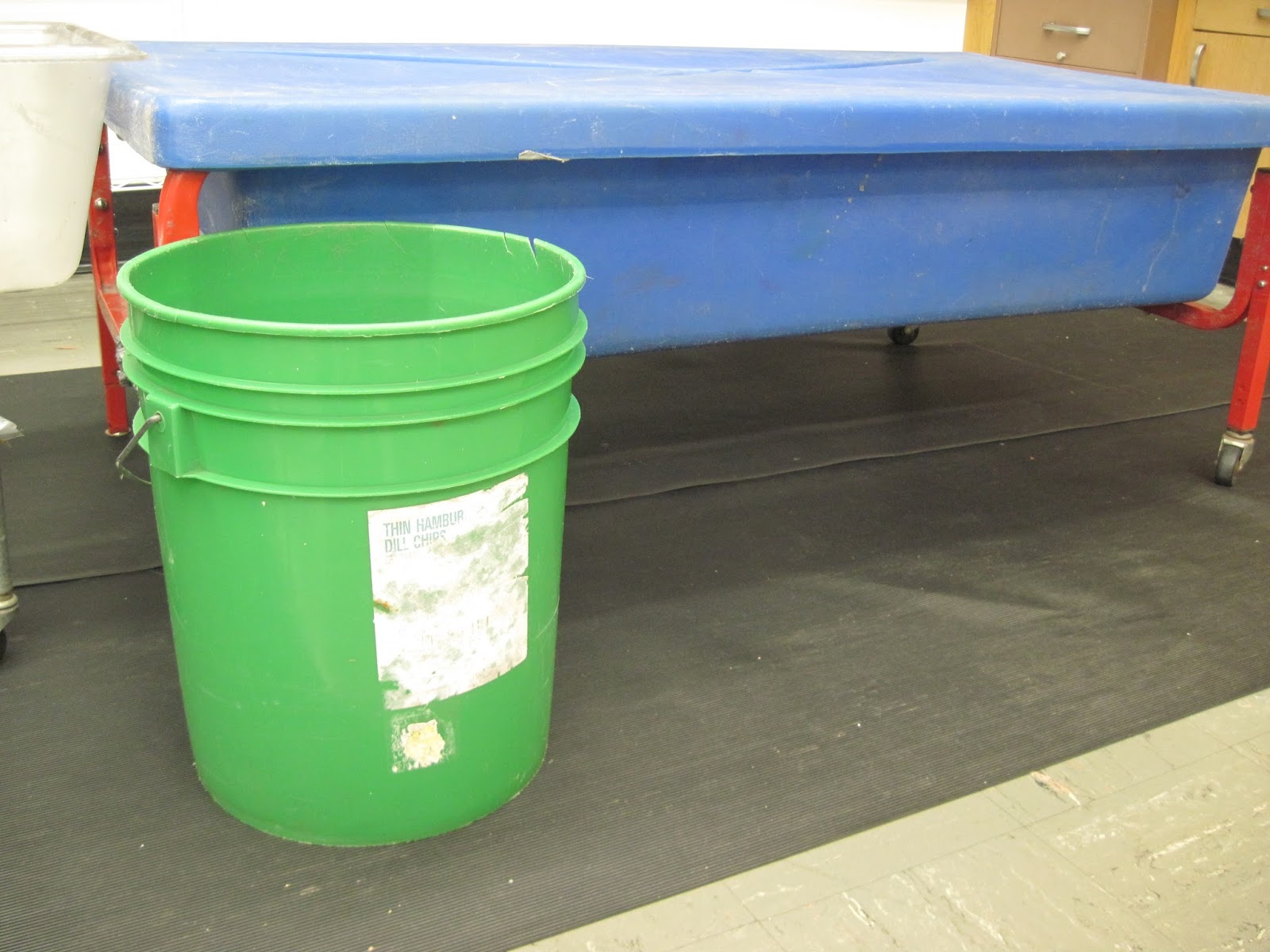 She worked at a fast food restaurant and the bucket was from a container for hamburger dill pickle slices---five gallons worth!  I accepted her offer, but because I had a small classroom, I did not know where to put it.  For the time being, I decided to put it in the corner near the sand table to hold sand toys.

If you have been around children long enough you can easily imagine the first thing the children did was to dump all the sand toys from the bucket into the sand table.  That did not surprise me. What happened next, did.  Children started to transfer the sand from the table into the bucket and vice versa.  When I stopped to think about what the children were doing, I remembered all the times I had to say: “Don’t dump the sand on the floor!”  My blood pressure would go up and so would my voice. With the bucket in place, though, I changed my message and tone from a negative to a positive by telling the children to “Put it in the bucket.”  When I did that, I got another surprise: they willingly obliged.

With the bucket ensconced next to the table, besides giving me an opportunity be more positive with my request to the children, I realized the children were telling me that they had this inner drive to transport stuff.  Where does that drive come from?  It may harken back to the time when our very survival as a species depended on our ability to transport the necessities of life.  Even today, transporting can be considered a life skill. When an adult goes to the food mart, he begins a whole course of action predicated on transporting food from the store to home.  It begins with walking up and down the food aisles putting things in his basket or cart and ends with putting everything away once he brings it home. I urge you to reflect a bit on your own day; how much transporting of stuff do you do? Like I said, it is a life skill.

Something else happened with the bucket that transformed my practice in the classroom in a very profound way.  I no longer felt like I had to manage the children’s behavior.  I saw that when they had a constructive outlet to transport, they managed their own behavior quite nicely.  To prove my point, look at the picture below.  At the near end of the water table, the bucket has been replaced by a tub to catch the water draining from the pipe.  What you see around the table are nine children, should-to-shoulder, fully engaged in some form of constructive transporting. 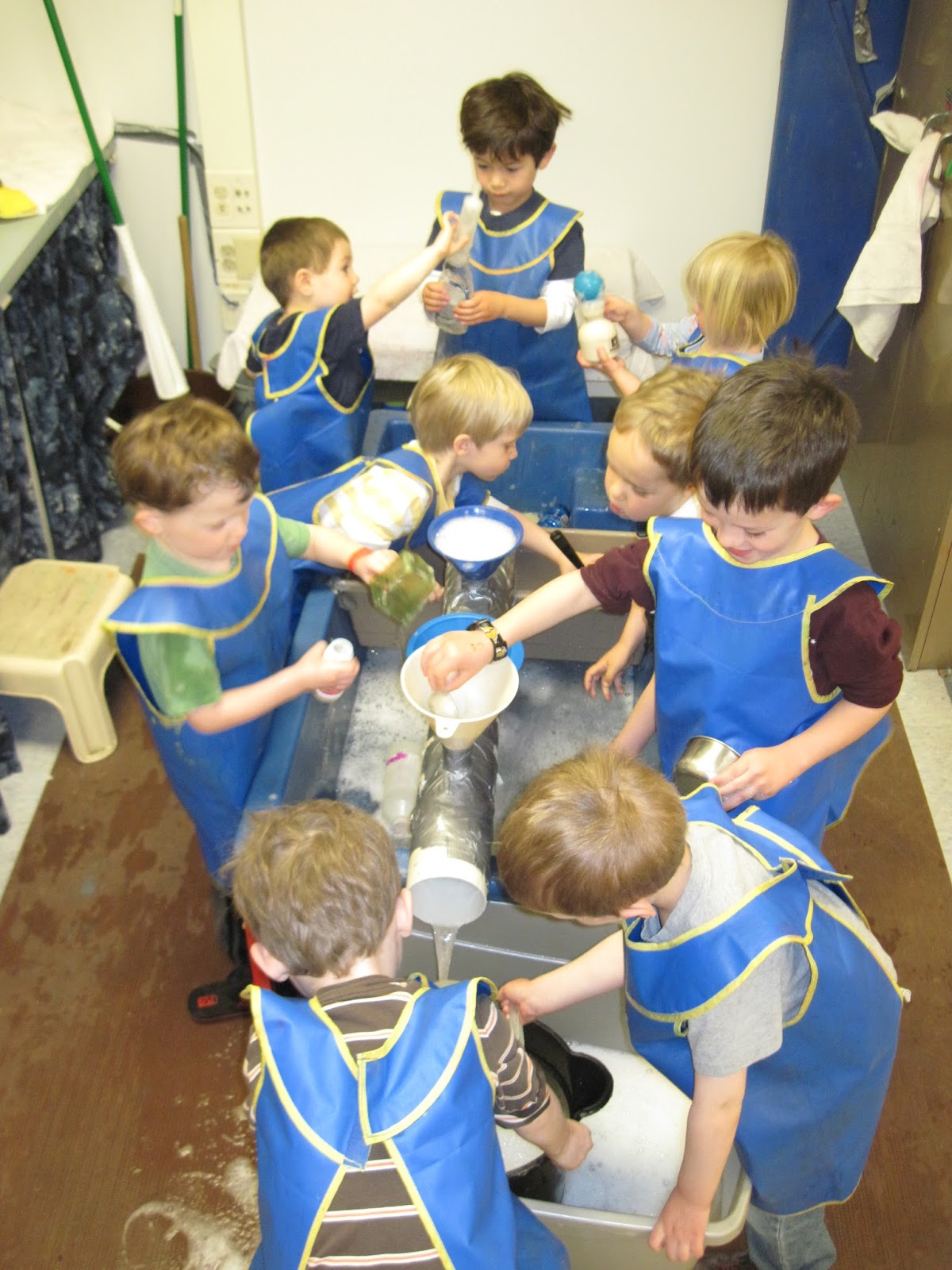 There was a cascading effect to this transformation.  Since I no longer needed to micromanage the children's behavior, I was able to observe more.   And the more I observed, the more I saw the children managing their own actions.  That does not mean there are no conflicts, but it does mean that given the chance (adult nonintervention) and the provisions (ways to constructively transport), the children negotiate with each other their needs and wants with minimum strife and a surprising amount of cooperation and accommodation.

Since I see transporting as an overarching operation that drives children's actions, everything I have built since and continue to build to this day allows the children to constructively transport the stuff in and out of the sand and water table.

By the way, I still honor that lowly bucket by having one at the ready next to the table at all times. 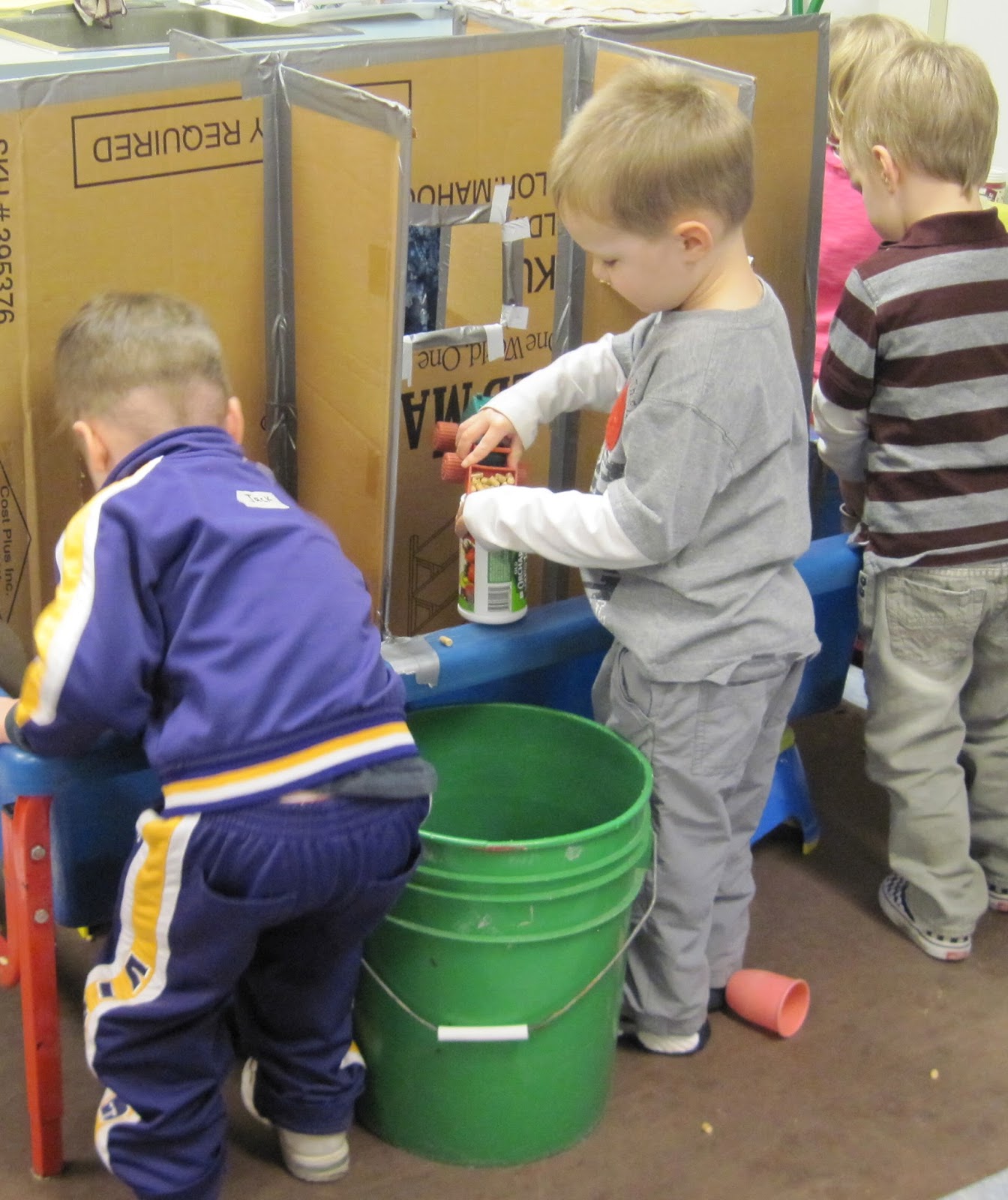 P.S. I will be presenting six sessions at the annual CECA conference in Kansas City August 7 and 8.  If you are in the area, you may want to check out the conference (www.CECAkc.org).  If you are going to the conference and attend one of my session, please stop by to introduce yourself.