A colleague asked me recently if I had ever done a post on the ideal level of water for the water table.  My answer was: no.  However, that did get me wondering about how I decided how much water to put in the water table.  My conclusion was: it depends.  But in all cases: enough.  What does that mean?

Since I do not limit the number of children at the table, there had to be enough water for all to engage in meaningful and sustained play.  For instance, the nine children pictured below around the water table needed enough water to fill half the table to satisfy their need to play and explore. 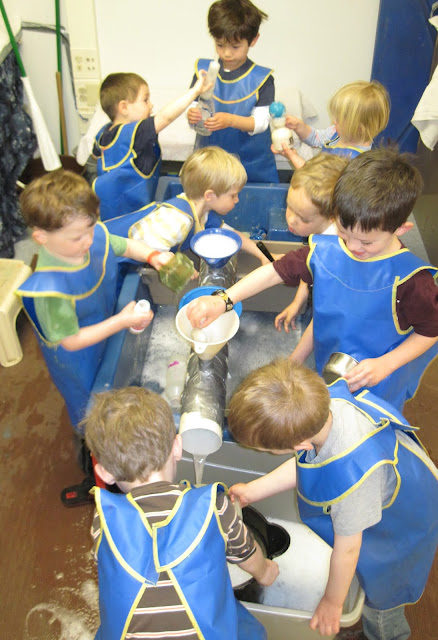 That was all the more true considering that some of them kept pouring water from the blue sensory table into funnels embedded in the pipe.  The pipe then carried the water out of the table into the tub next to the table thus depleting the water in the blue water table.  For that reason, I added even more water to the water table. 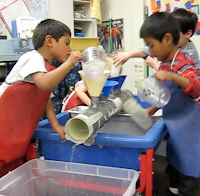 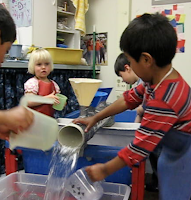 Once the pipe was full, they pulled the "plug."  To their great surprise and enjoyment, they created a gusher.  All the water that filled the pipe poured out with force in seconds.  I came to this play late, so I do not know how it started.  I have no idea how the children decided to plug the pipe and eventually fill it.  I do know that without enough water, this play never would have happened and never could have been sustained.  (Too many conditionals.  Sorry.)


Here was another nice example of enough water for meaningful and sustained play.  The children set about the task of filling a five-gallon bucket next to the table.  In the video, the water was already inches from the top when a child poured a little more water---carefully and accurately---from a stainless steel bowl into the bucket.  As she finished her pour, the child with the spoon declared that it was enough water.  The child with the spoon then started to stir the water in the bucket with her spoon.  She was soon joined by a child with a little metal measuring cup.  They seemed to want to know how vigorously they could stir without spilling.


Filling the bucket from Thomas Bedard on Vimeo.

Because the bucket was full and there was still water left in both the sensory tables, there was more than five gallons of water to begin with.  Without at least that amount of water, the children would not have been able to play with the idea of "what is full and what does that mean for our operations?"

However, the amount of water always depended on the setup.  For the giant sponge, I used much less than five gallons.  I used only as much as the sponge with hold.  If I used too much water, the sponge began to float in the table and it became hard to squeeze and make suds. 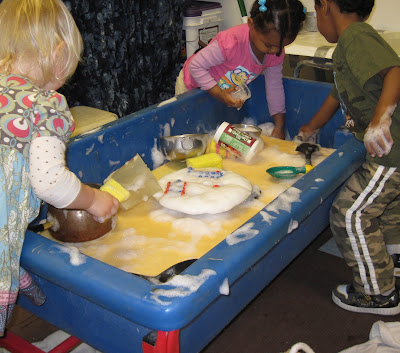 Another setup that took very little water was baby washing with a clothesline. An inch or two of water in the table was all that was needed for the children to wash the babies and to wash the clothes. 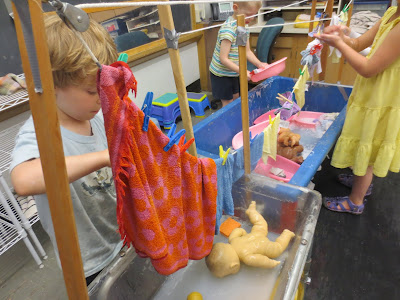 Water beads was another setup that did not need a lot of water because the children's exploration and operations revolved around the water bead themselves.  In fact, too much water would have necessarily changed the focus of play.

There may not have been a need for a lot of water for this setup, but there was a definite need for plenty of water beads for varied and sustained play.

When my colleague first asked me the question about how much water, my first reaction was that it was not about the amount of water.  Rather it was about children's need to transport (axiom #1 in the right-hand column of this blog).  The amount of water had to optimize the children's need to transport what was in the table out of the table, whether that meant filling the pipe or the bucket or transporting the beads around the table.  (If you have read this blog post, here is a question for you: How did the idea of transporting inform the question of how much water to use for these setups: the giant sponge and the baby washing with the clothesline?)

Let me leave you with my answer to my colleague's question.  Depending on a your tolerance for messy play and spilling, and depending on the apparatus you set up in the table, and depending how and where you setup your apparatus, use enough water to optimize play and learning.  Oh, and it also depends on you knowing the children and other adults you work with.  In other words, it depends---and you have to make that decision.  By the way, after you make the decision, you can always make another decision about reducing or adding water depending on your observations of the children's play with the original amount of water.

P.S. Before all other "depends," is the implicit assumption of who is in control of the play.