I am spending some time these days going over my digital pictures and videos to tag them.  I have over 30,000 images so it is quite a task, but boy is it fun.  As I look through the ones that capture play at the sensory table, I think about how an apparatus in the table might affect play and exploration in and around the table.

Here is a very simple example of what I am talking about.  The example features a couple of play episodes around an apparatus I built back in 2012.  I called it a box metropolis.  I built the construction over three weeks, adding boxes each week until there were a total of 25 boxes all connected in and around two sensory tables. 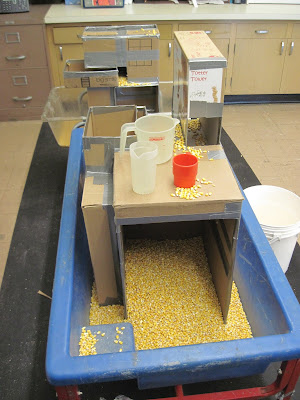 In the first play episode, a child scooped corn from inside one of the boxes.  To do that, he had to bend down and lean under and into the box.  There is plenty of corn in the open portion of the table, so why did he feel compelled to gather corn from inside that box? 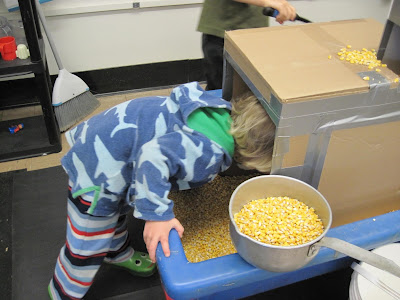 By the way, by having to bend over and reach under and into the box, the child is strengthening his core and working on his balance.  His feet were slightly spread for balance and his right hand grabbed the lip of the table for even more stability.  He was probably working a lot of other muscle groups, too, simply by bending, reaching and scooping and then reversing the process to fill his metal pot.

He used a plastic yellow scoop to collect the corn in his metal pot.  He did that hands-free because he balanced the pot on the lip of the table.  He was able to do that because he also leaned the pot up against the box.  The metal pot would have been less stable without the help of the box. 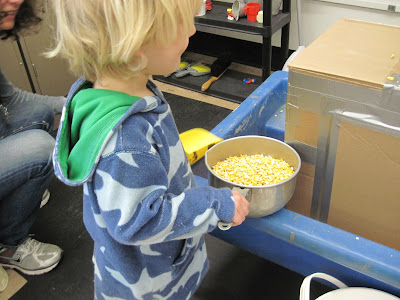 How did he figure that out?  Was it just trial-and-error?  What's interesting was that he balanced the pot using the edge of the box so only a tiny portion of the pot reached in beyond the edge.  That also allowed him easy access for pouring the corn into the metal pot.

At this point, he exchanged his yellow scoop for a black plastic ladle.  He then filled his ladle with corn from the metal pot. 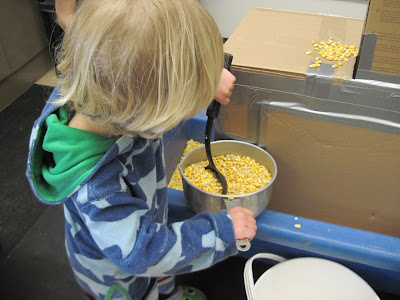 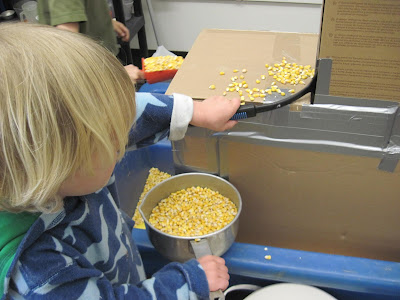 He then used the ladle to put some corn into the narrow opening of another, higher box.  For all practical purposes, the only way he could do that was with his left hand.


That was not such an easy operation because to get the corn in that hole, he had to lift the ladle up to the height of his shoulder, cross his midline, insert the ladle in the hole and twist his wrist to empty the ladle. 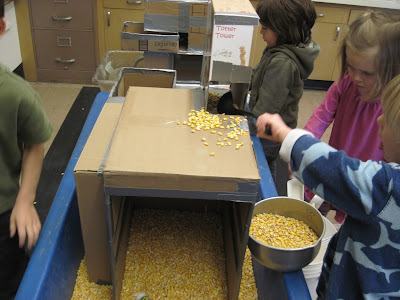 The second episode was quite similar.  A child on the other side of that same narrow box placed a plastic green cup just inside the box.  He put corn into the cup with a long handled spoon, again lifting it from the table to the height of his shoulder.  He used his left hand to scoop, but then enlisted the help of his right hand to guide the spoon into the box.  Twisting his wrists, he emptied the spoon.  Because that was such a narrow opening, some of the corn went into the cup and some not.

He said that the box was a machine for making coffee.  Was he recreating an experience he had watching an adult make coffee?  Did the corn kernels and the sound of them remind him of coffee beans?

I am rule-adverse.  I never set about making rules when something happened in the classroom that I did not like or when there was a conflict arising from any sort of disagreement.  In fact, when I first started teaching back in the mid 70's, I had no rules in my classroom whatsoever.  My modus operandi in the classroom could only be described as laissez-faire: a policy of leaving things to take their own course without interfering.  I truly believed that children were capable of resolving their own conflicts and life would be rosy in the classroom.

Early in that first year of teaching, I experienced a day that was far from rosy.  I had a child who said that he wanted to be Oscar the Grouch---and he could emulate him quite well.  One day he antagonized every other child in the room to the point that they were all mad at him and were chasing him around the room.  In other words, it was utter---and I mean utter---chaos.

I have no idea how I got things to calm down.  But at the end of the day, the teacher in the adjacent room told me that I had to do something---anything---so that did not happen again.  The director also called me into the office and told me the same thing.  Little did they know that I had decided that there needed to be a change so there would never be another day like that in my teaching career.

What I decided to do was drop the the laissez-faire policy and create some rules.  I came up with three rules:
RESPECT YOURSELF
RESPECT OTHERS
RESPECT THE MATERIALS

I never sat down with the children to talk about the rules.   Instead, we lived the rules.  When an issue arose in the classroom, we dealt with it immediately and respectfully.  For instance, my Oscar the Grouch friend loved to pick up garbage on our walks.  Instead of making a rule about no picking up garbage, I decided one day that we would take a garbage walk.  I gave every child a paper bag and told them they could pick up anything they wanted on our daily walk.  The next day, I brought out each of their bags so they could each make a garbage collage.  The children glued anything they wanted from their bag onto a nice big piece of tag board.  The collages were 3D and all masterpieces---from my perspective.  However, something very interesting happened: my little friend quit picking up garbage on our walks.

And herein lies the beauty of those three rules.  They are flexible and can be adapted to any context.  For instance, a rule about no hitting would seem to be a no-brainer, right?  For me it was not.  Since I allowed some play fighting in the room, children did end up hitting each other.  When and if children were hitting, then I had to make decisions about intent and degree of force, because intent and degree of force varied with the game and with each of the individuals involved in the game..  If I had a rigid rule, then I would have absolved myself of those decisions.  All I would have had to do was enforce the rule.

However, by simply enforcing a rigid rule, I would have changed the locus of control from the children themselves to an external rule.  As a consequence, the children would be expected to obey the rules.  I was not looking for obedience.  Rather, I was looking for the children to have the opportunity to internally modulate their behavior by making fine distinctions about the context in which they were operating.

Those three rules were all I needed for 35 years of teaching.  I think one of the reasons was because, for the most part, life in the classroom was not about rules.  Rather it was about creating  and co-creating a respectful environment that was based on children's innate curiosity and eagerness to learn and connect with others.