For me, funnels are indispensable at the sensory table.  They are items that work with both wet and dry medium.  I installed them as an integral part of the apparatus and I provided them as loose parts for the children's operations.

Here are two examples of funnels I used as part of an apparatus.  For the first example, I taped clear plastic tubes to the bottom of the funnels and then I threaded the tubes through the crate so water poured into the tubes exited at different points around the table.  In addition, I taped the funnels to the crate so the children could not manipulate the funnels.  I wanted a stable apparatus in which the children could track the water flowing through the clear tubes. 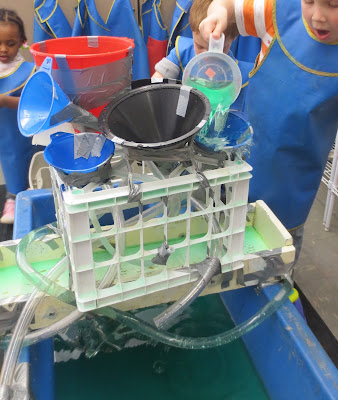 For the second example, I taped funnels to connectors that emptied into a large PVC pipe.  The pipe was set on a slight incline so when the children poured water into the funnels, the water exited on the end over the grey storage bin.  Again, I wanted a stable apparatus, one that used funnels to capture all the water the children poured from their different size containers. 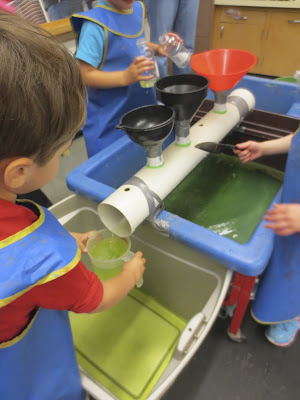 Sometimes I set up funnels in such a way that they were an integral part of the apparatus but did not get tape down. 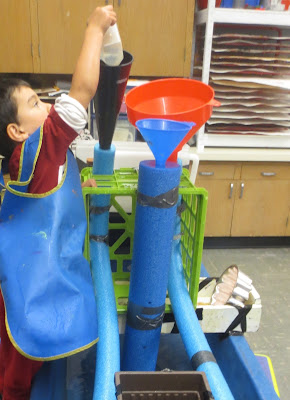 Without the funnels, it would be more difficult to get the water into these pool noodles without a lot of spillage.   For some reason, the children rarely pulled out the funnels.  But they could if they wanted to. 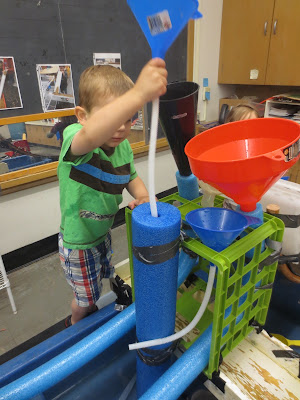 Besides showing that a child could remove a funnel from the apparatus, this picture gives a hint at the variety of funnels I have found.  There are two funnels that came with hoses already connected to them; the black funnel is tall and narrow (I found it in an automotive store); and the red one comes from a surplus store and is the biggest one I have ever found. 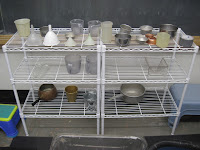 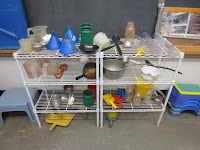 Even if I made them an integral part of an apparatus, I always provided more funnels as loose parts.  On shelves next to the sensory table, the children always found funnels to be used with either wet(left) or dry(right) medium.

As loose parts, children used the funnels to find ways to put their own stamp on an apparatus.  For instance, the child pictured below used two funnels to change how sand flows through a vertical tube embedded in a box.   He placed a funnel on top to collect the sand going down the tube and he placed a second funnel in a bottle under the tube to gather the sand coming out and direct it straight into the bottle.  Ingenious! 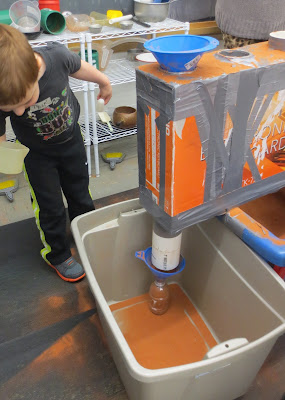 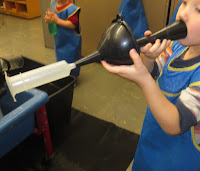 Children often used the funnels for building or making novel creations.  On the left, the child has taken containers and funnels from the shelves to build a little tower inside the black funnel.  On the right, the child has created a new musical instrument using two funnels and a plastic syringe.

One of the more interesting uses of a funnel as a loose part was a child using it upside down to transport water from one container to another.


Funnel as tool from Thomas Bedard on Vimeo.

In essence, she made the funnel into a new tool with a new purpose.

Believe me, I have just scratched the surface for how I use funnels and how the children use funnels.  The fun with funnels never ends and knows no bounds. 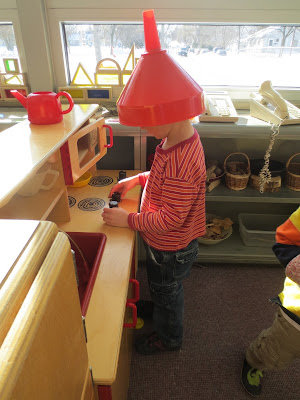