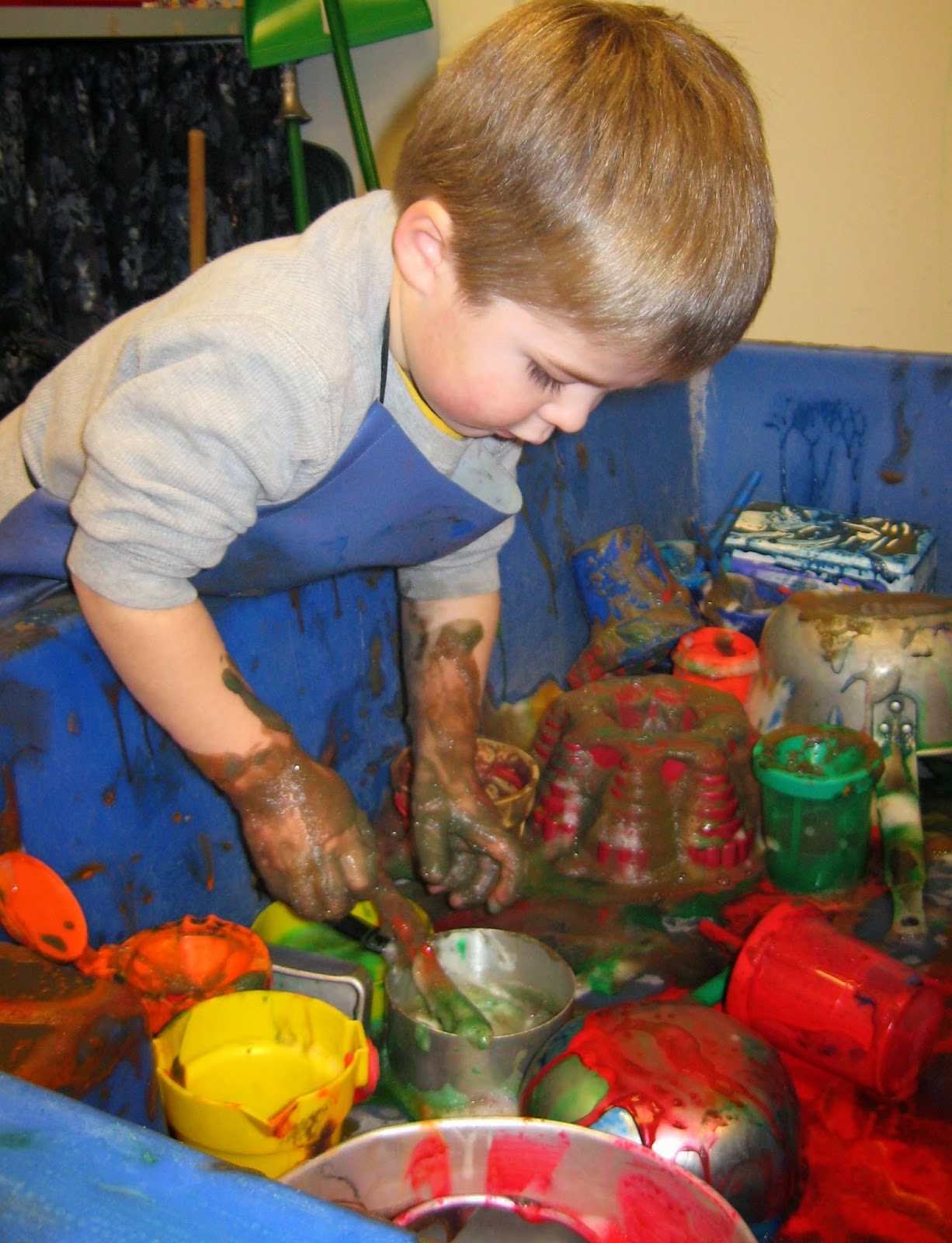 You can see suds paint up to this child's elbows and covering every cup, pot and jello mold in the table.


I used to set this provocation up every year.  For some unknown reason, I had not set it up since 2011, so I decided to set it up this year.  When I set it up, though, there were a few changes.  In the table, I set up the new Channel Board I built earlier this year. 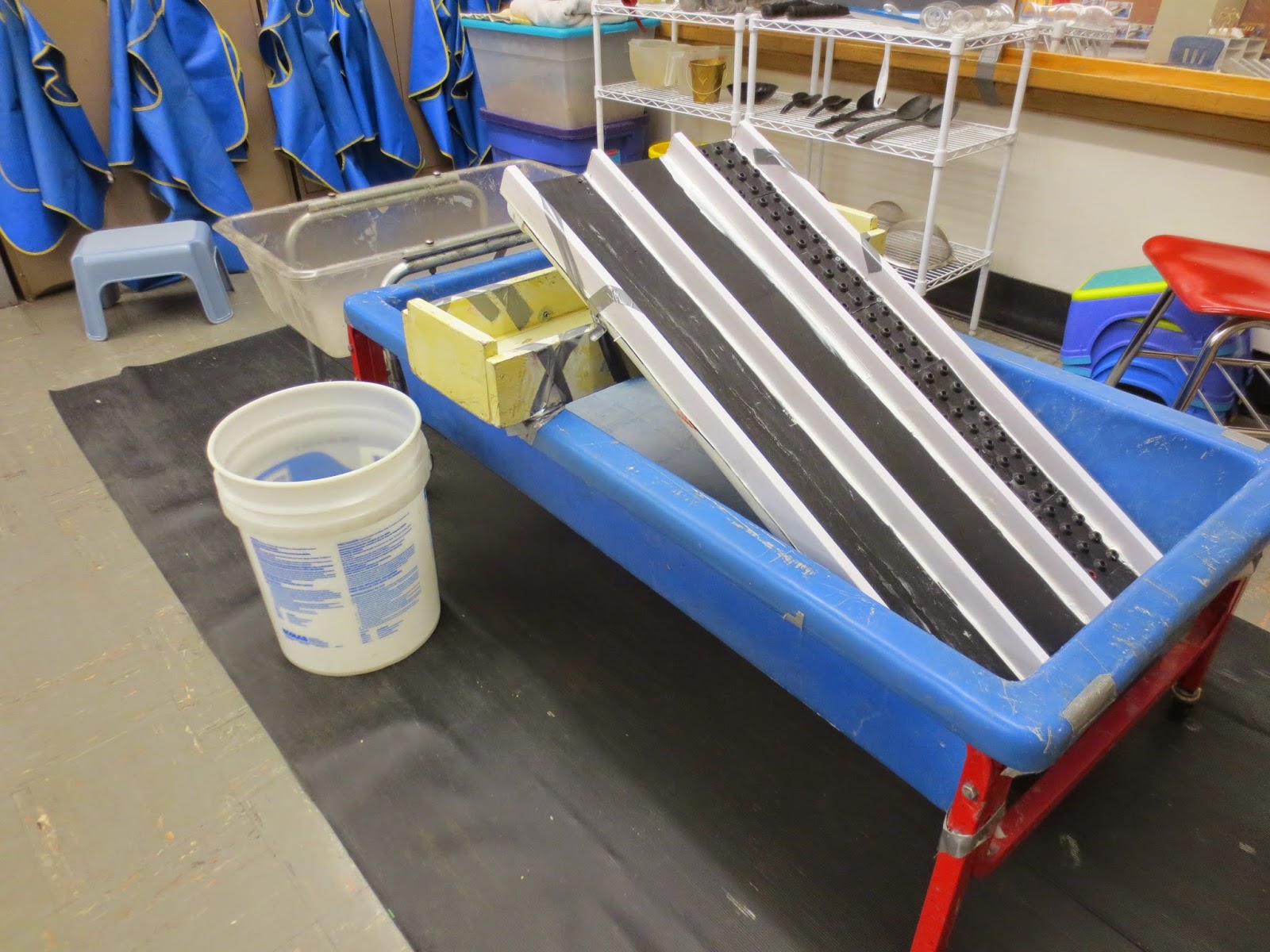 As you can see, I used a wooden tray that spans the width of the table to prop the channel board on an incline.  The incline is purposeful so suds flow down the channel.  Watch as this child pumps suds onto the incline.  When he has to reposition the dispenser so he can continue to pump suds, he stops briefly to focus on the suds flowing down the channel.  It is a nice little a-ha moment.

From this same video, you can see another change to the provocation this year: I supplied foaming soap dispensers so the children could create their own suds more easily.  When the children first arrived at the setup, paint and suds were already mixed together in separate paint pots so they could start mixing in other containers right away. 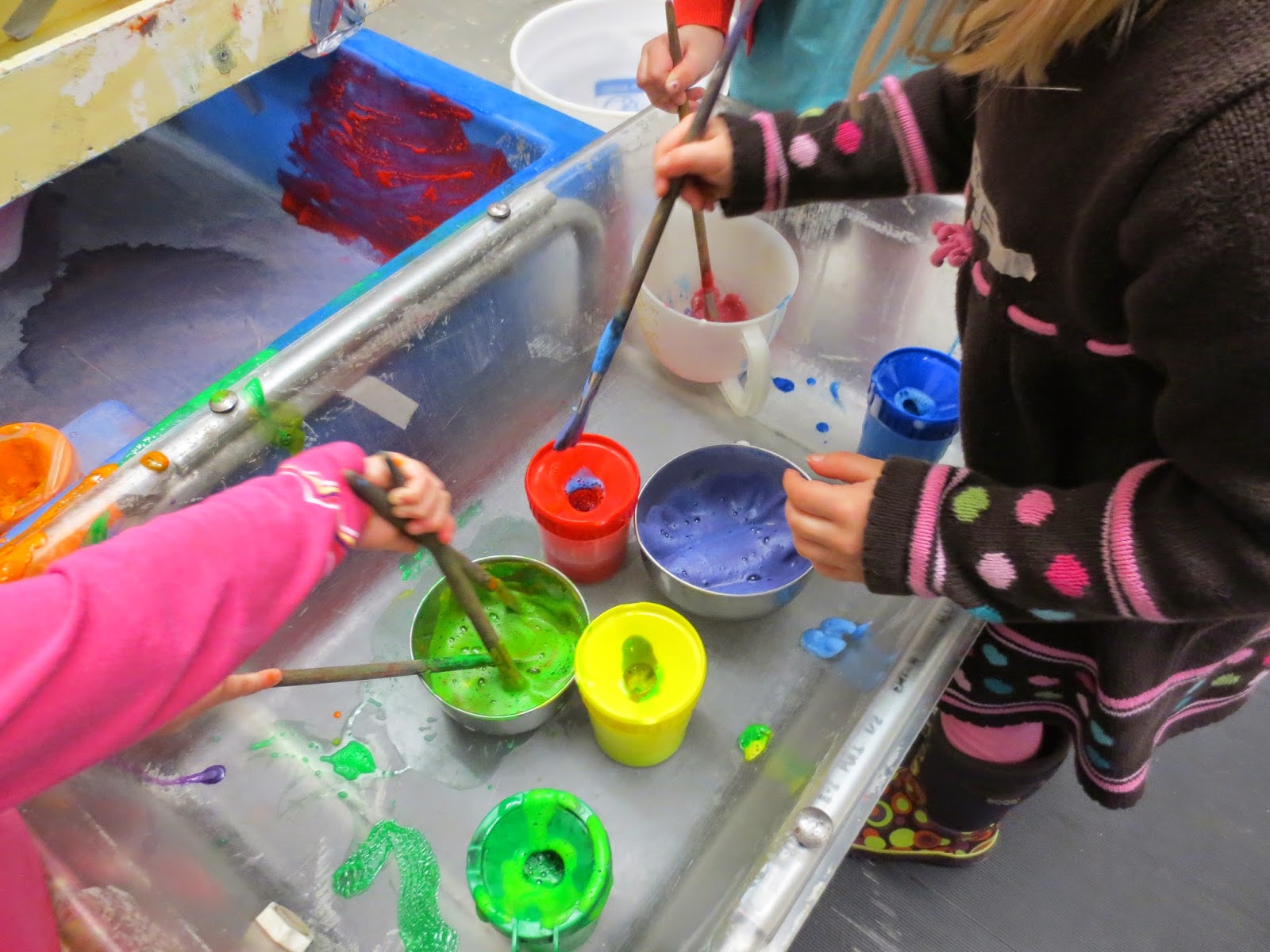 Before long, though, they were adding their own suds to the pots. 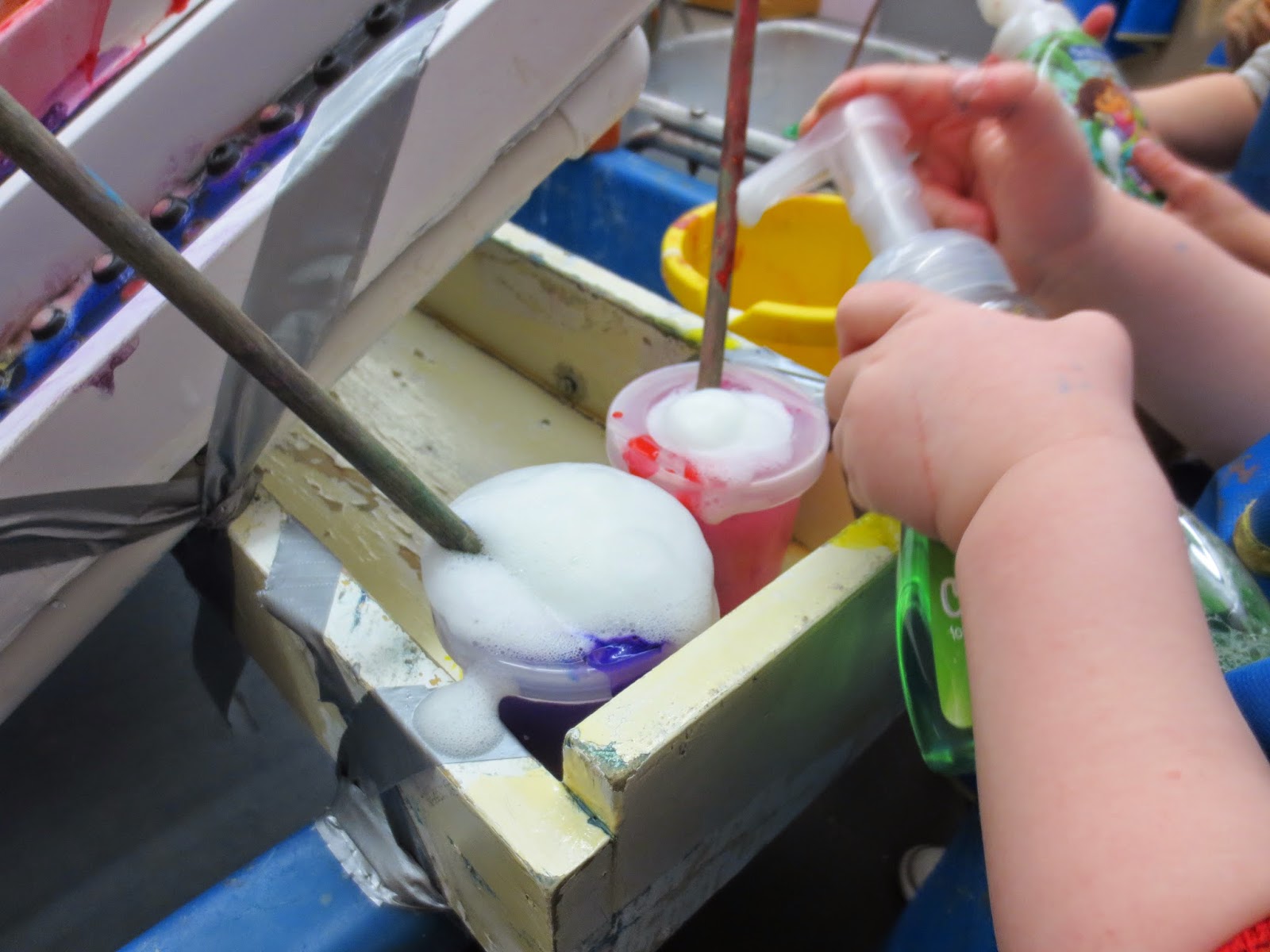 In years past, the children have spent a lot of time painting loose objects like pots and pans.  This year, the channel board setup became an important object to paint.  That included the top, the sides, the bottom and even the tray. 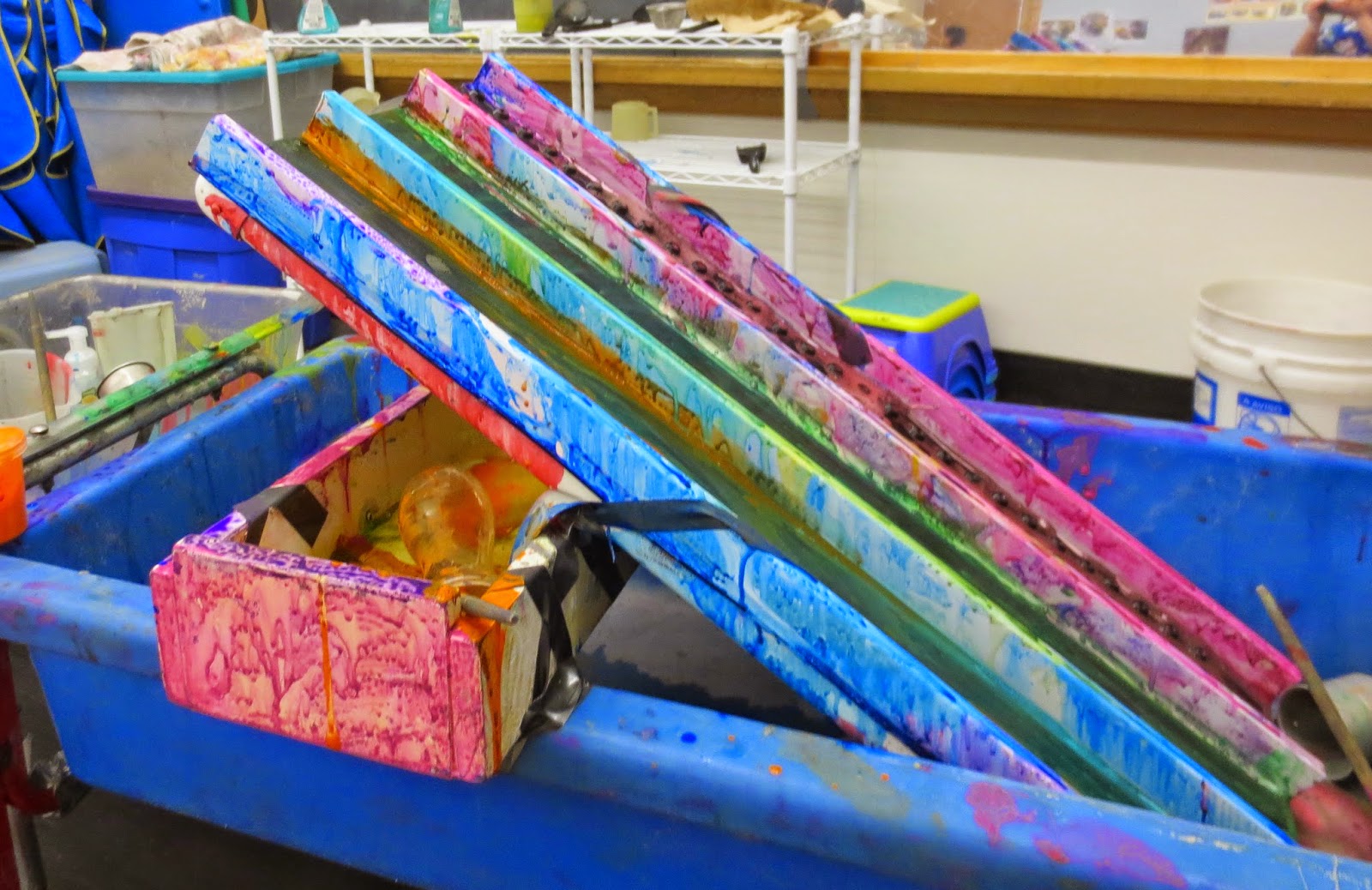 Since I grew up in the 60s, I can't help but think the best word to describe this painting creation is psychedelic.

When the children painted the channel board, there was not so much mixing because, as you can see, the colors remained fairly true to the original colors in the pots.  That was the exception, though, because there was an awful lot of mixing.  This year, there were even a couple of self-declared "professional mixers." The video below begins with the child declaring that she and her friend are professional mixers. She goes on to say: "We love to mix something.  We always get our hands dirty, so we can mix."

On this particular day, mixing was serious for this child.  You can see it in the vigor with which she stirs and you can hear it in the excitement in her voice.  She stayed with suds painting for almost an hour. When her mom came back after class, the child told her that, for the first time ever, she did not even stop to eat snack.  Did I say she was serious?

I started this post by saying this is one of the messiest invitations I set up at the sensory table. Just to prove it, here is a short video of two children asking each other if they want a "wash-off." The first child uses a soapy brush on the other's forearm.  The second child reciprocates by putting clean suds on the first child's forearm.

Wash-off? from Thomas Bedard on Vimeo.

In the process of "cleaning" themselves, they are also making up their own word: "wash-off".  A "wash-off" with a paint brush full of painty suds is only possible in a child's world.  Many adults just see a mess.  This particular adult, however, sees a glorious mess created with the time, space and agency to bask in the productive joy of their own making.