"Teacher, she took all the sand and won't let me have any."

Does that sound like something you might hear at the sand table?  It is those types of pleadings that got me thinking: Is there a way to divide the sand table to eliminate, or at least reduce, the number of squabbles?  At the time, I had a very small sand table that was three feet by three feet and only stood a foot off the ground. How does one partition a table that small?  With cardboard. 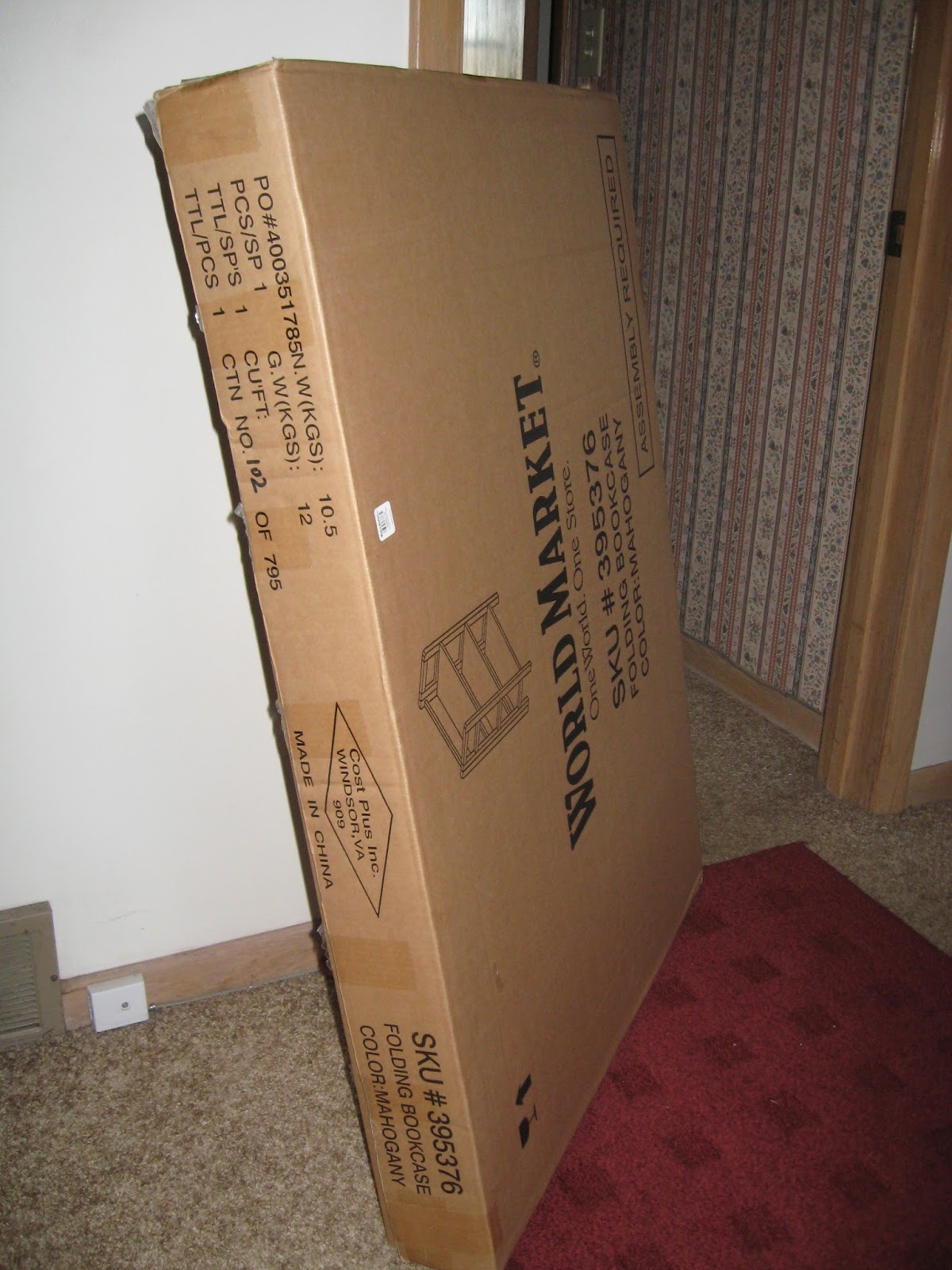 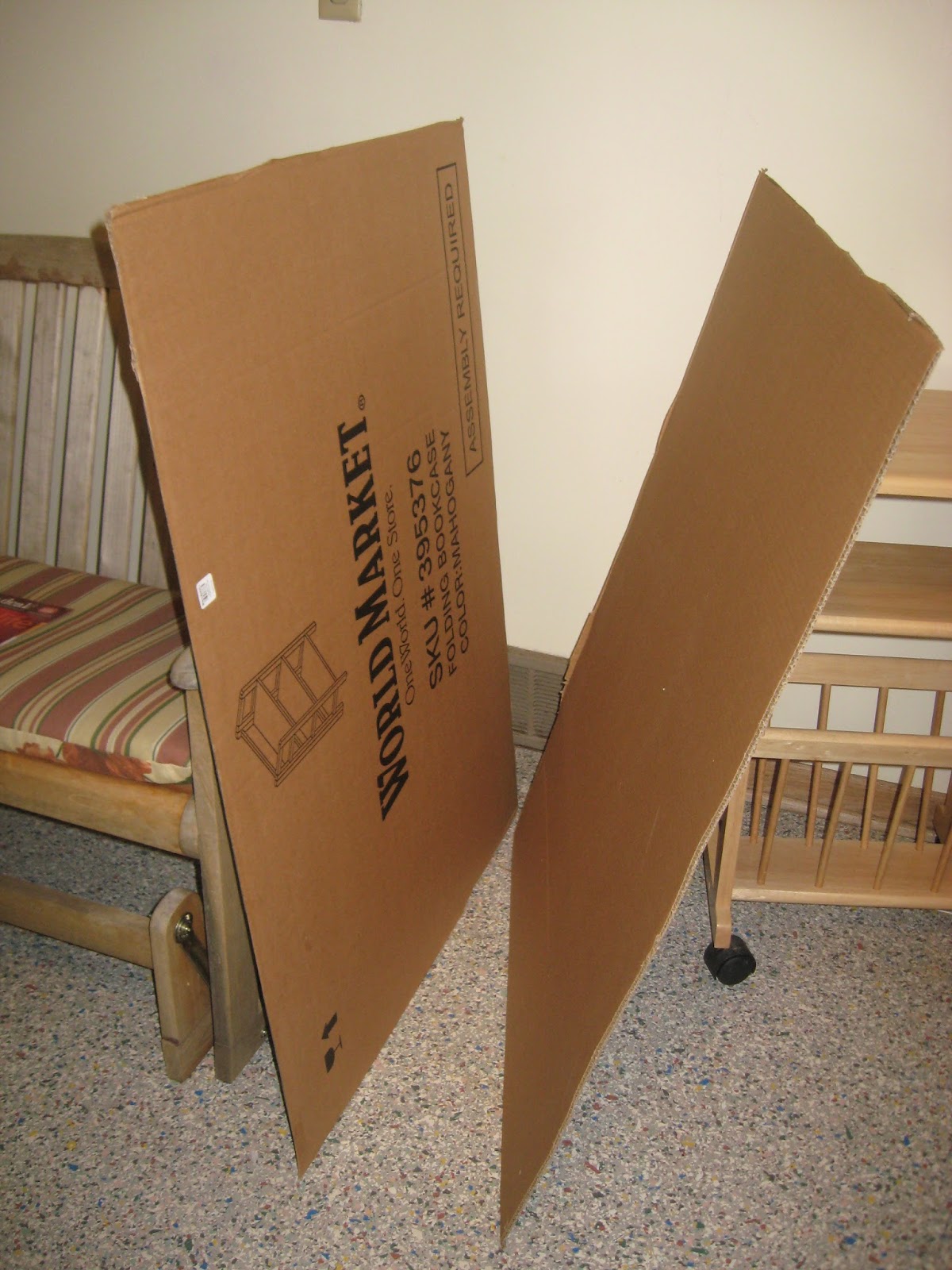 Using a big enough box, cut out two sides so you have two sheets of cardboard.  Trim the sheets so they match the length and width of the table. 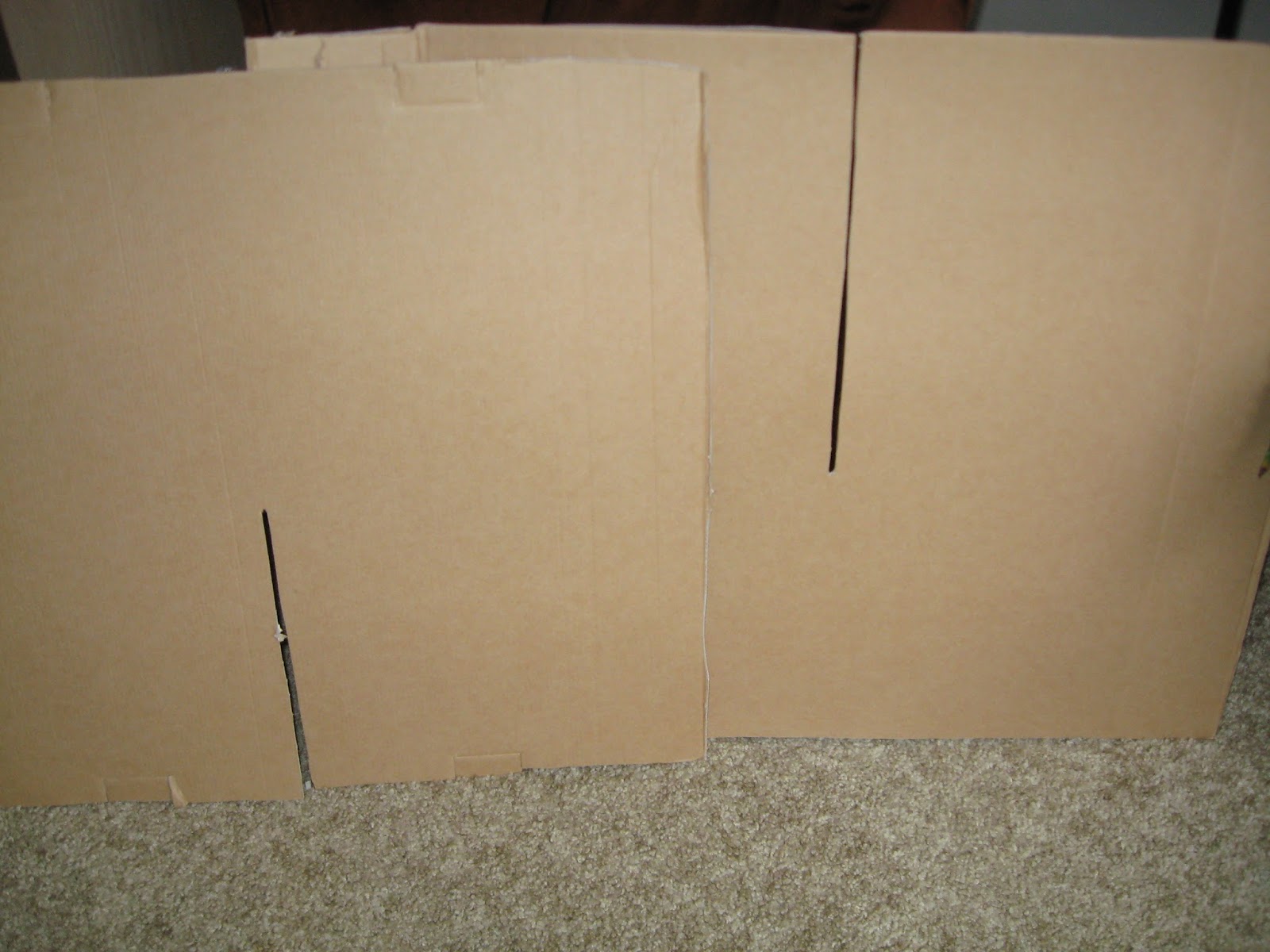 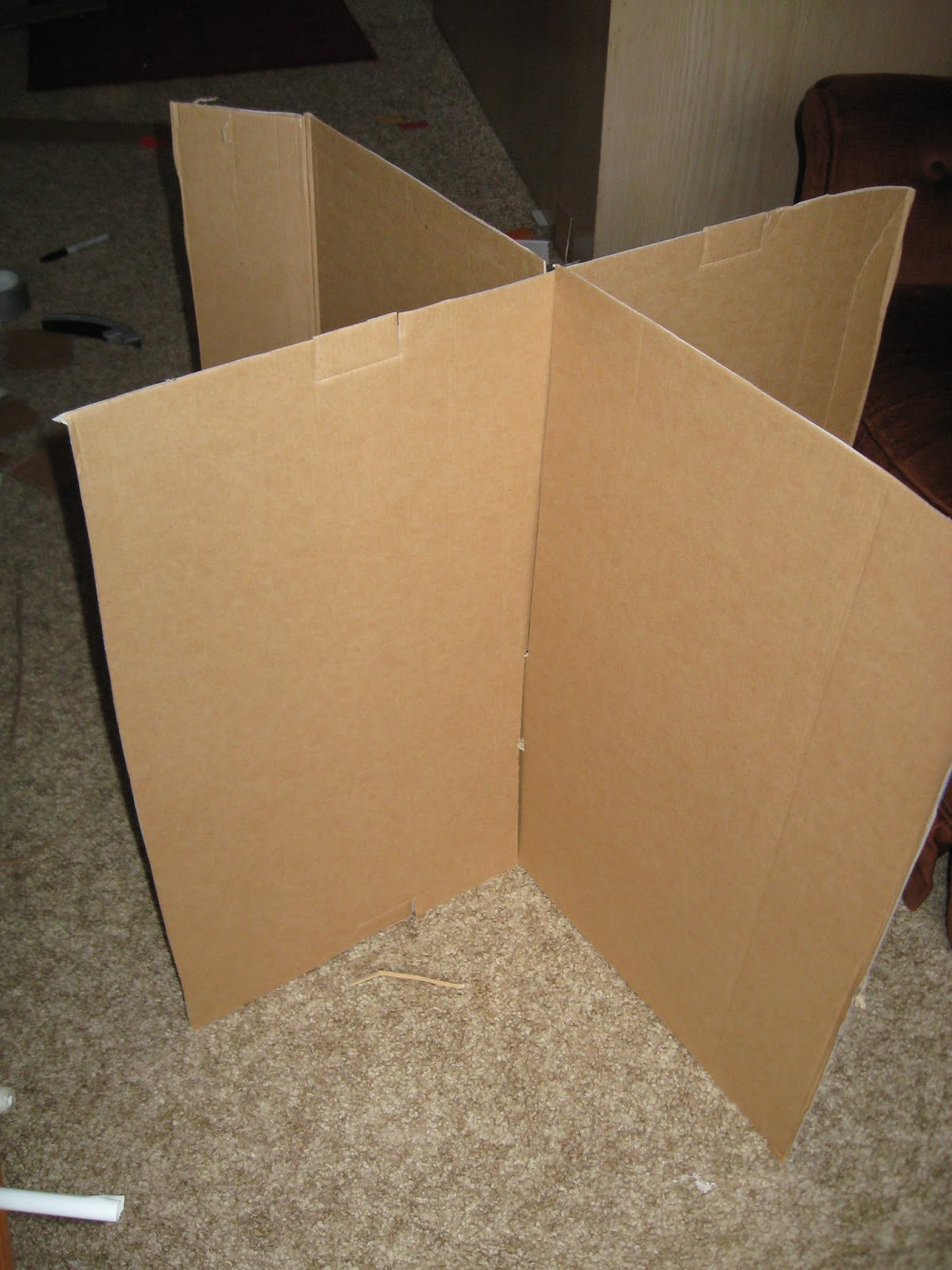 Cut slits halfway up each piece in the middle, one slit cut from the bottom and one from the top (picture on the left). Now slide the two pieces together to make four areas (picture on the right).

The whole thing is then secured into the table with duct tape.  The seams are also taped to give the dividers more stability. 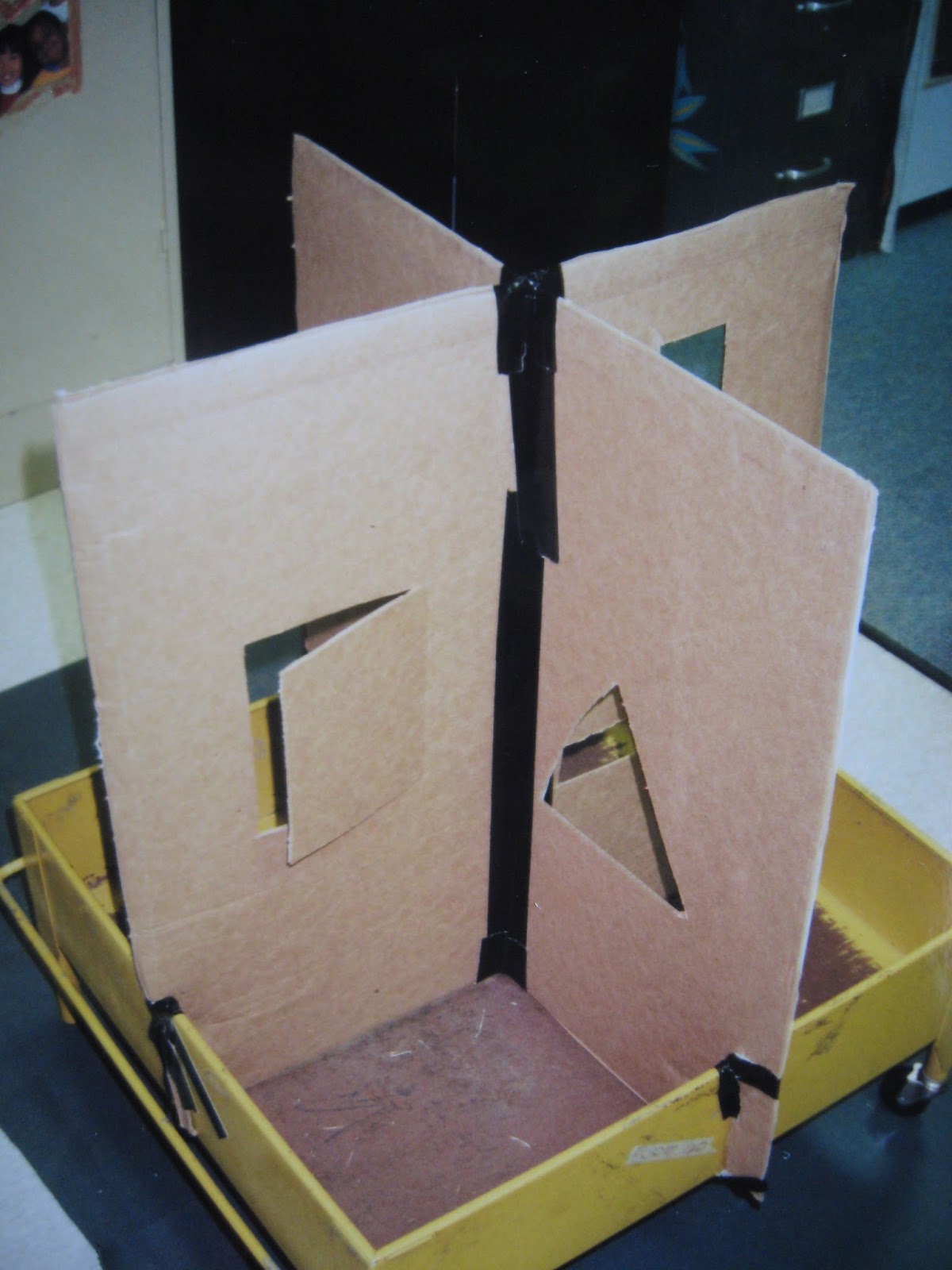 If you notice there are holes cut in the cardboard.  I did that on purpose. Although I wanted to cut down on the squabbles, I did not want to eliminate social interaction.

What was the result of installing dividers in the table?  It really did eliminate some of the conflict. In fact, the spaces created by the cardboard dividers seemed to enhance the children's focus when they are operating in their own little cubicles.  (Working in cubicles, is that a life skill?) 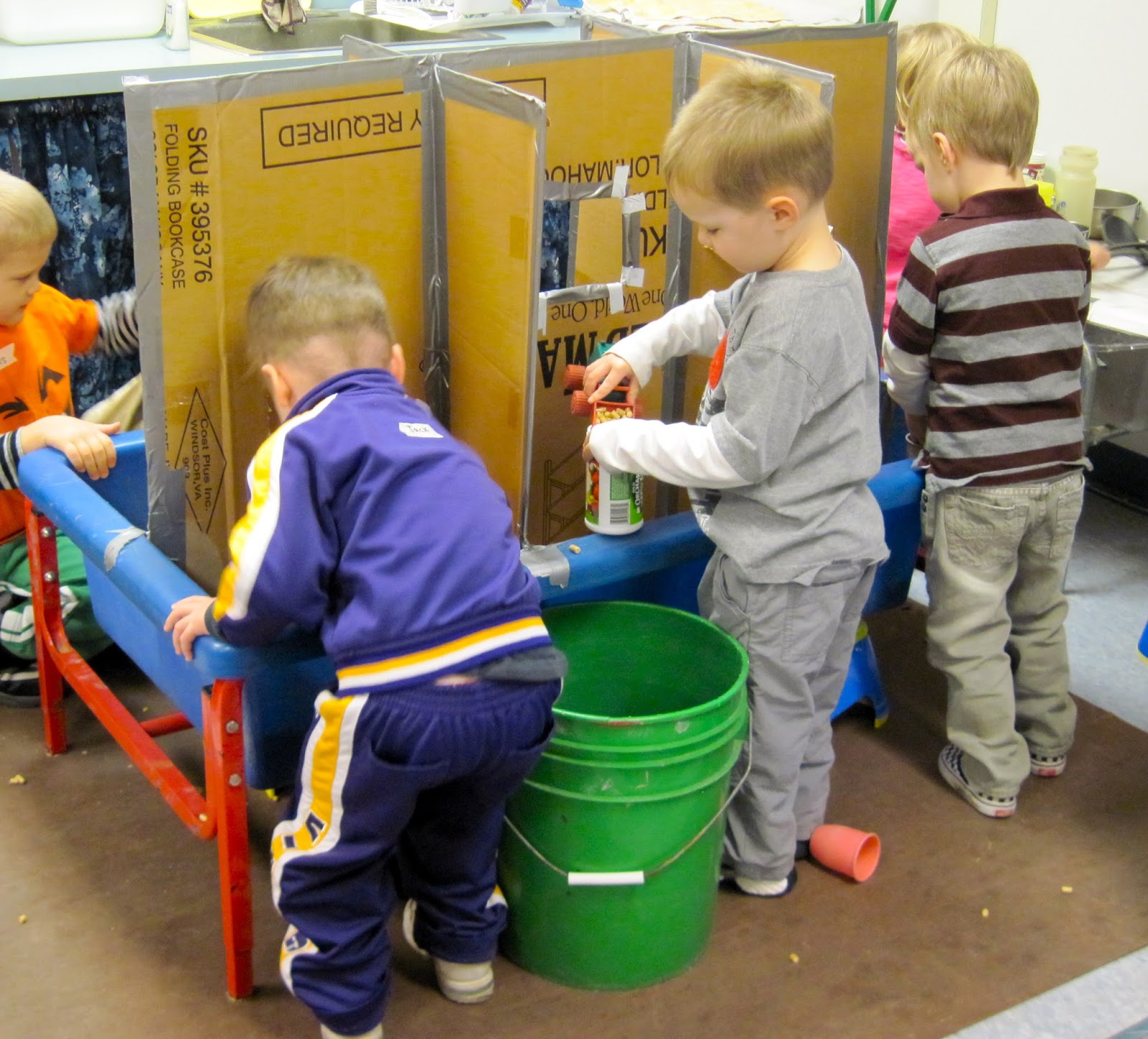 It did not prevent the hoarding. 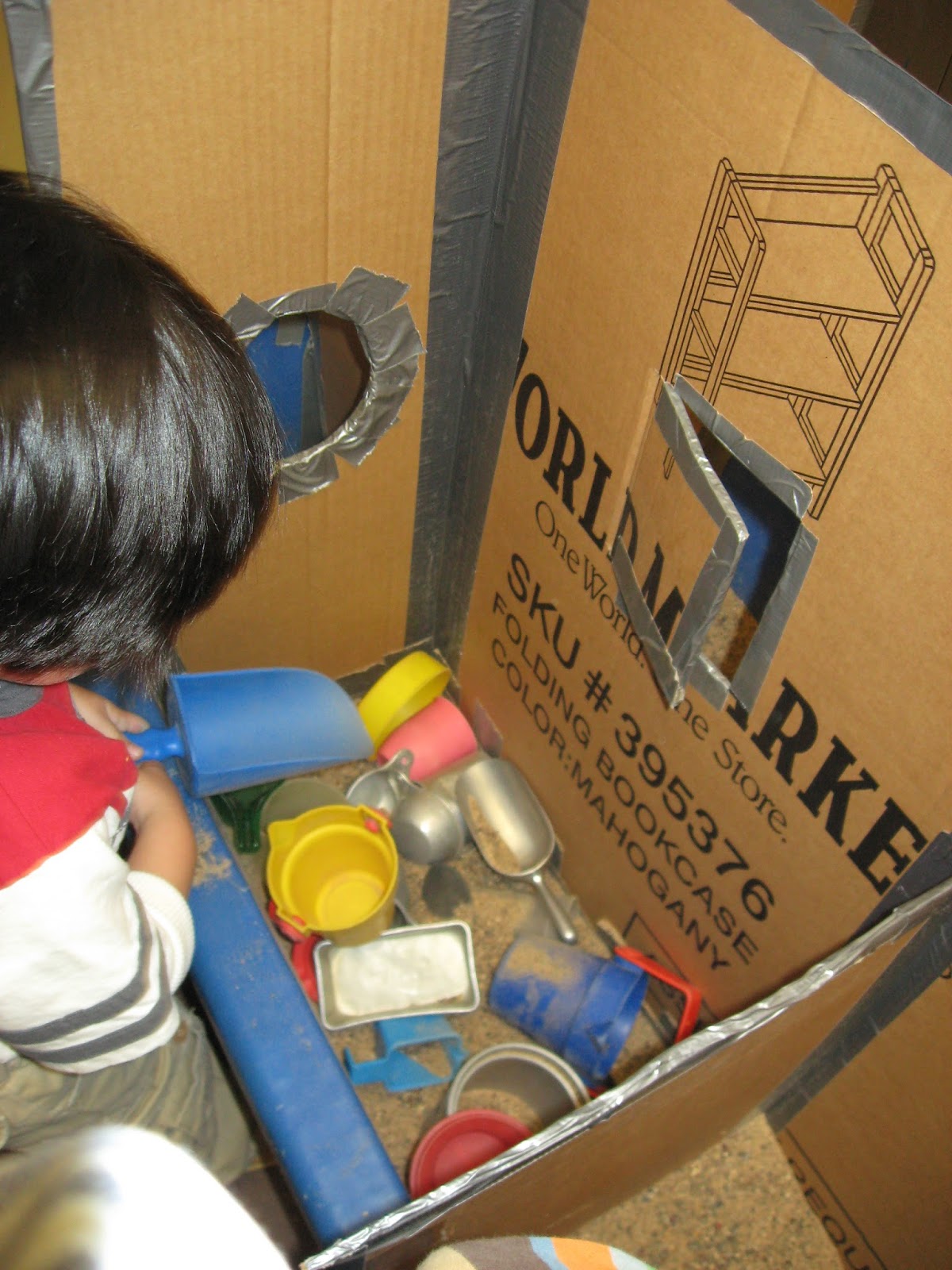 Whenever I observe children interacting with an apparatus, I am always surprised with the operations they dream up.  For instance, in the picture below the child is playing in two different spaces partitioned by the cardboard.  In fact, he is using the divider as a part of  his operation. 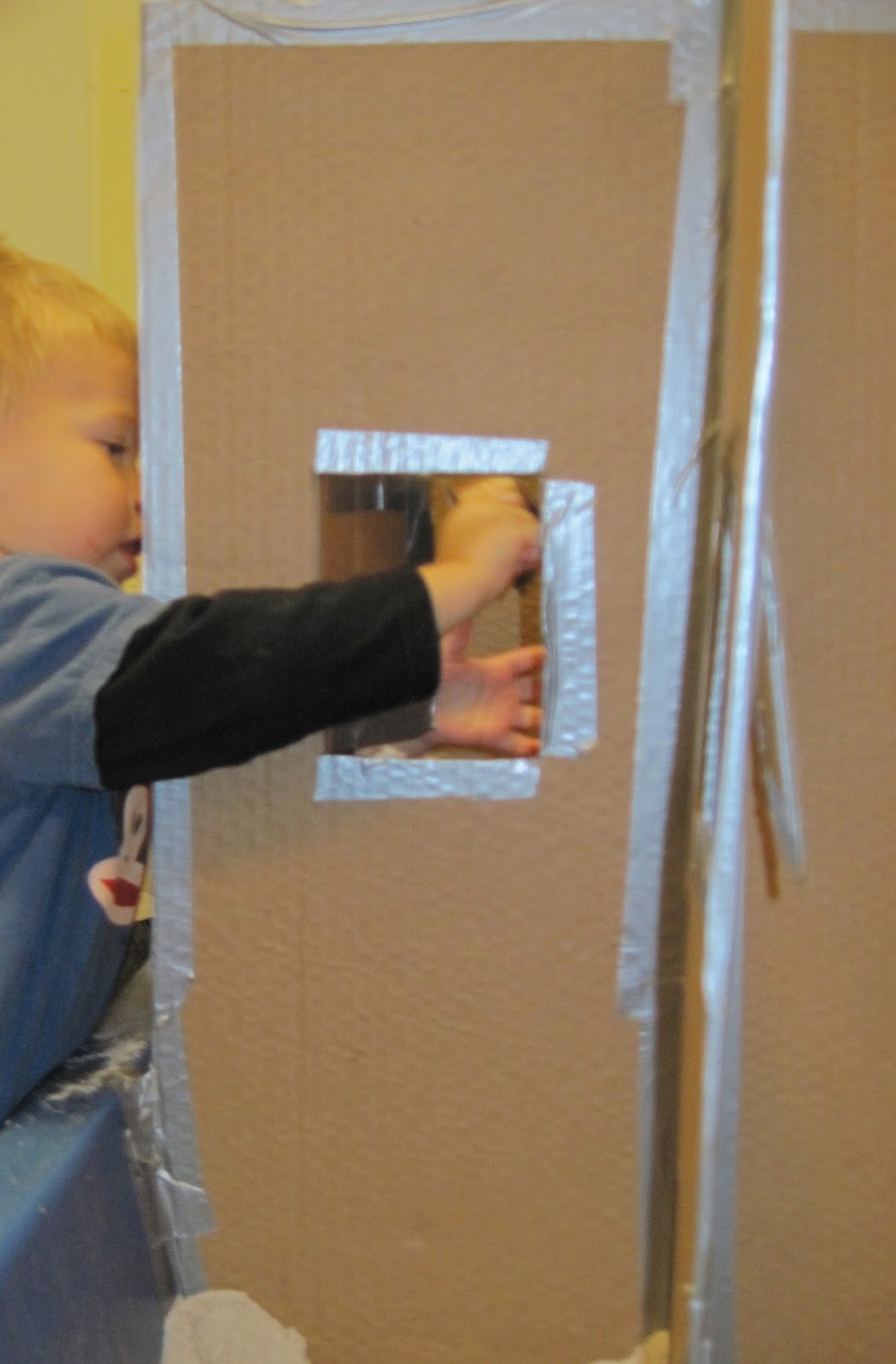 The child is transferring sand from one space to the next using the cut out window.  What motivated him to do that?  An OT person might say this is a good example of crossing the midline.  The child is also working on body awareness because he is not following his right arm with his eyes, but is using proprioception to know what his right arm is doing.  But what is it about this apparatus that encouraged this type of operation?

Sometimes it is easy to see that the child is the agent for the interplay between materials and the apparatus.  That agency is sometimes quite imaginative and quite practical.  For example, the photo below shows that a child has figured out he can hang the measuring cups by their handles on the divider so he can fill them hand-free. 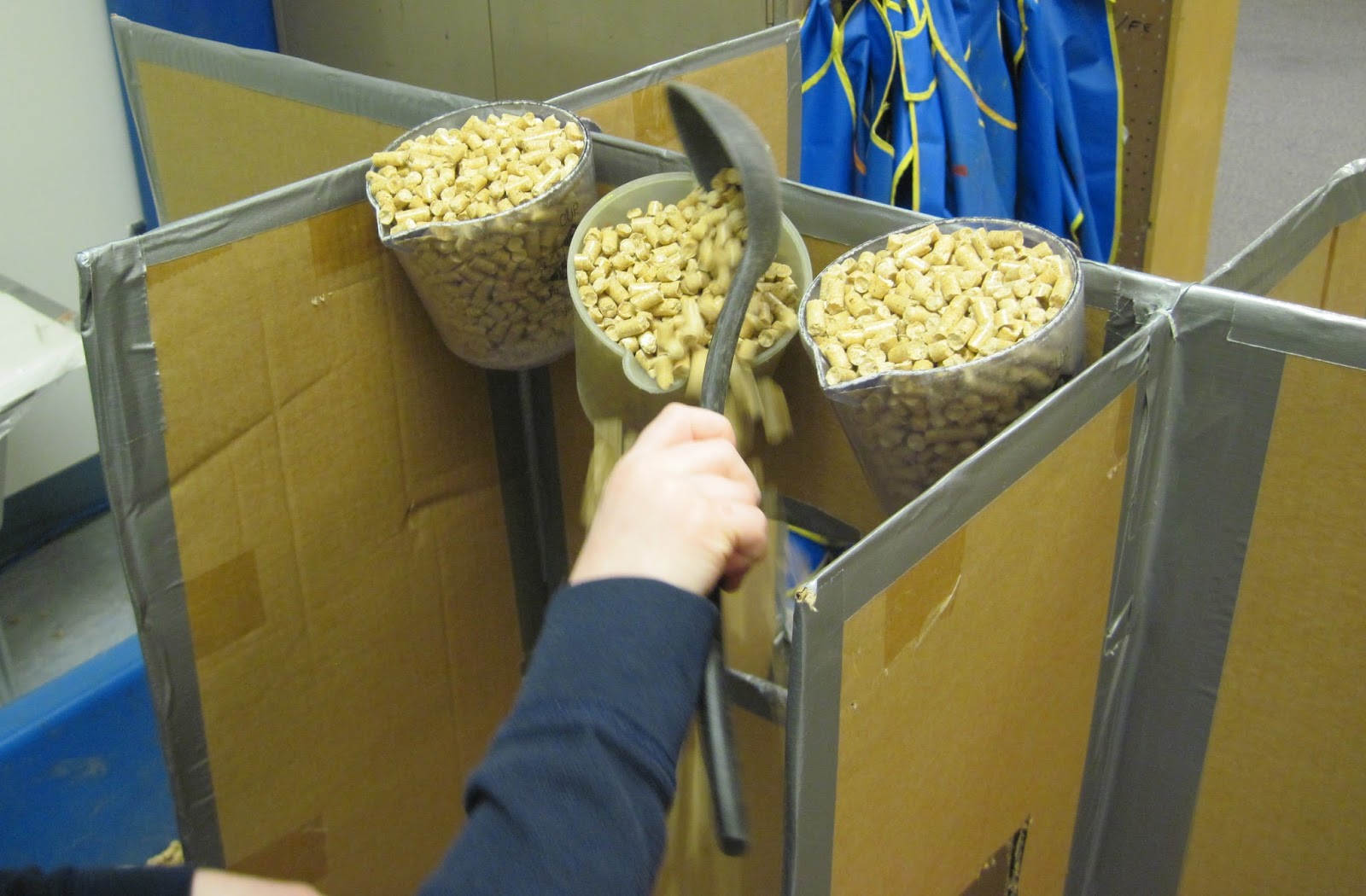 But how exactly did this child come up with this idea?  Would you have thought of this?  I sure didn't.  Now that a child has taught me, though, I can pass it on as a provocation for others.

Do the dividers foster more solo play or more social play?  Look closely at the picture below. There are four children working in for four spaces with one child, cup in hand, waiting in the wings. How much of the play is individual and how much is in concert with others?  I am not exactly sure. I do know the boy in purple and yellow on the right end is filling the container through the window for the boy in orange who is contentedly watching his friend's actions.   Interestingly, the boy doing the pouring cannot see where the container is and how much more is needed to fill the container. He is essentially relying on the boy in orange for direction. Now that is a sophisticated endeavor. 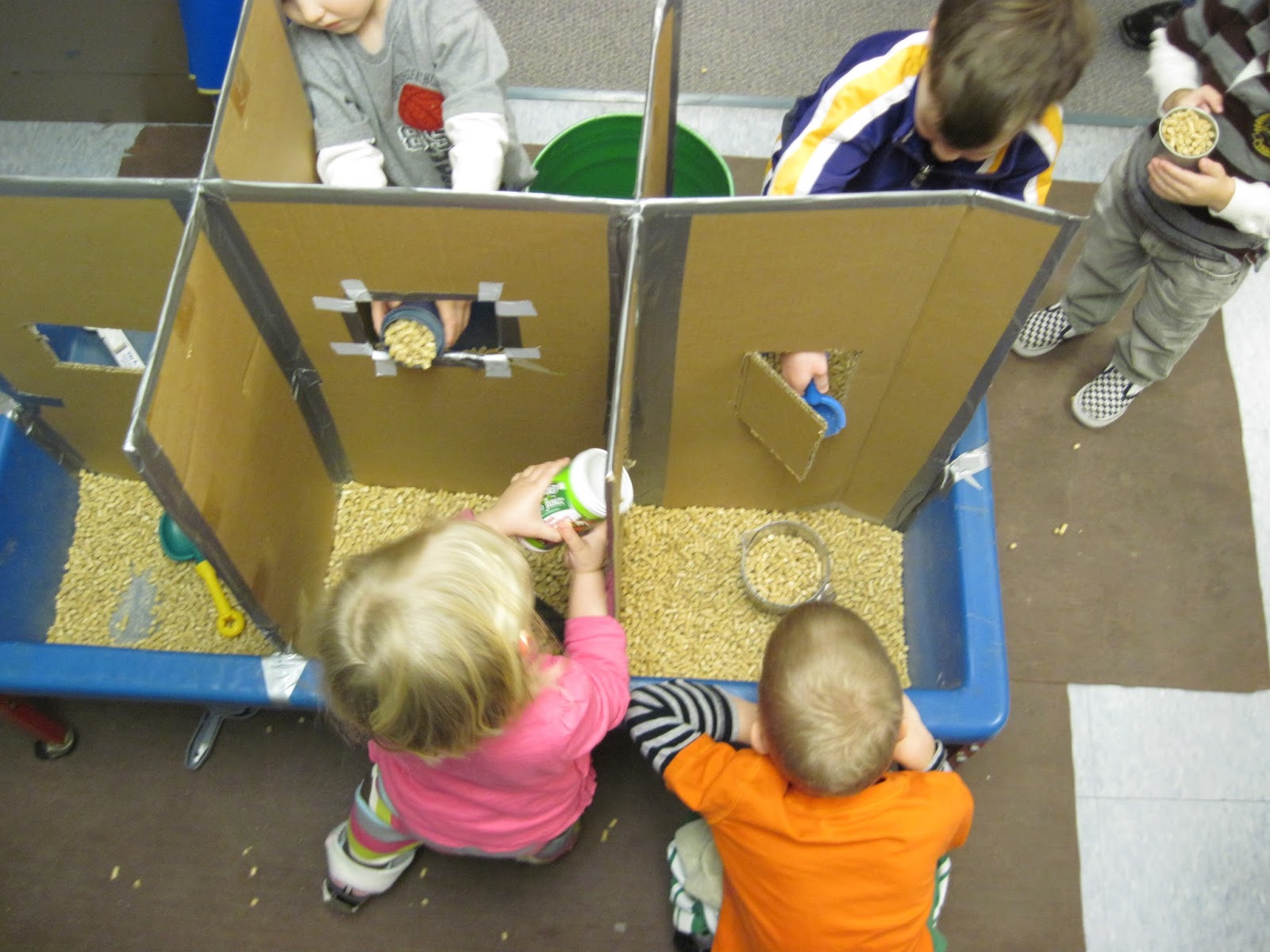 When I look at the other two children in the middle spaces, their play seems more individual, although I can't imagine they do not know someone is on the other side of their actions.  They are just not as synchronized in their actions.

One the biggest surprises for me with this apparatus was that it prompted the age-old game of peek-a-boo.  What an excellent surprise to see who was on the other side. 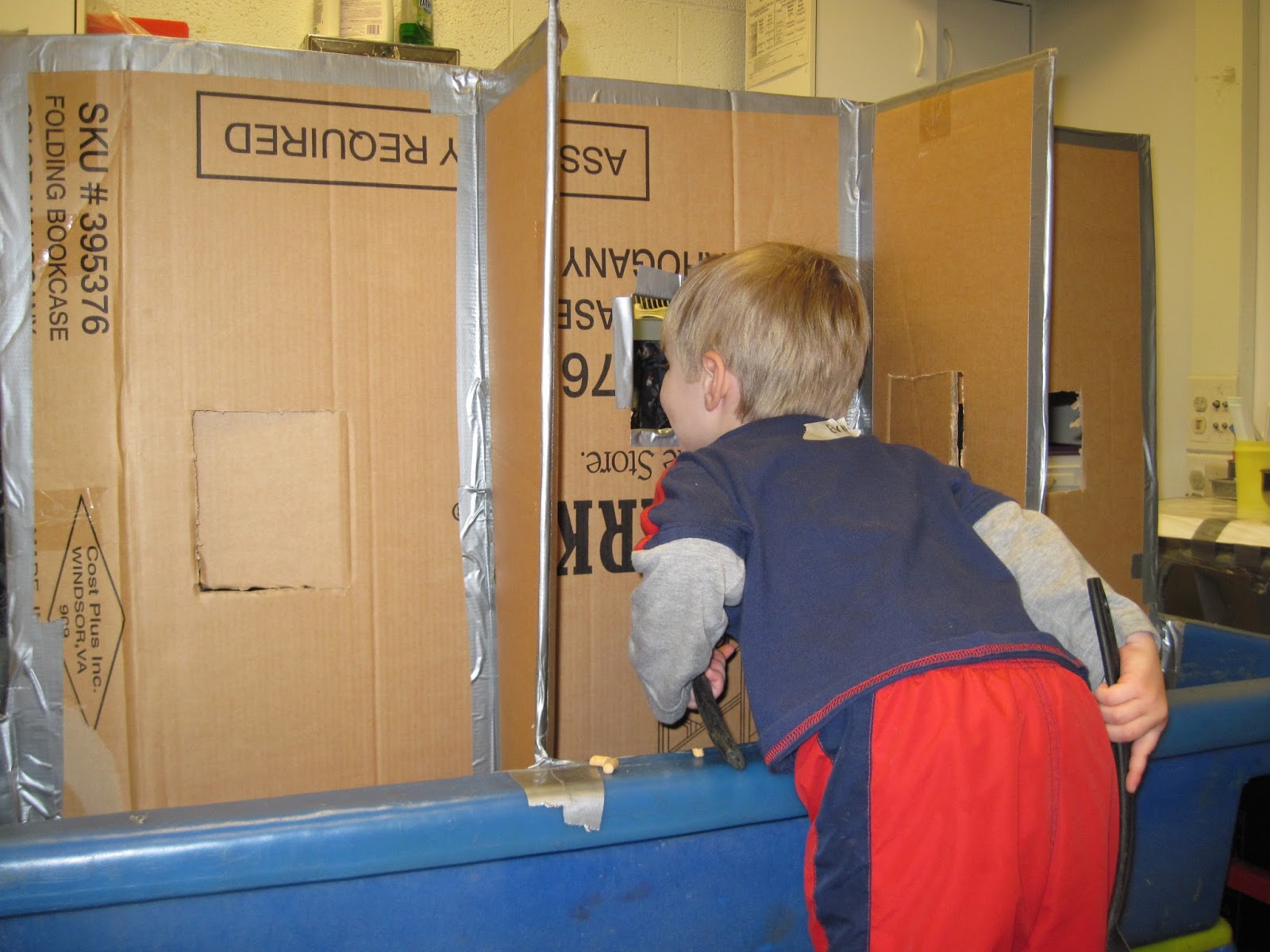 Often times that game can get quite animated and even physical and can involve more than two children. 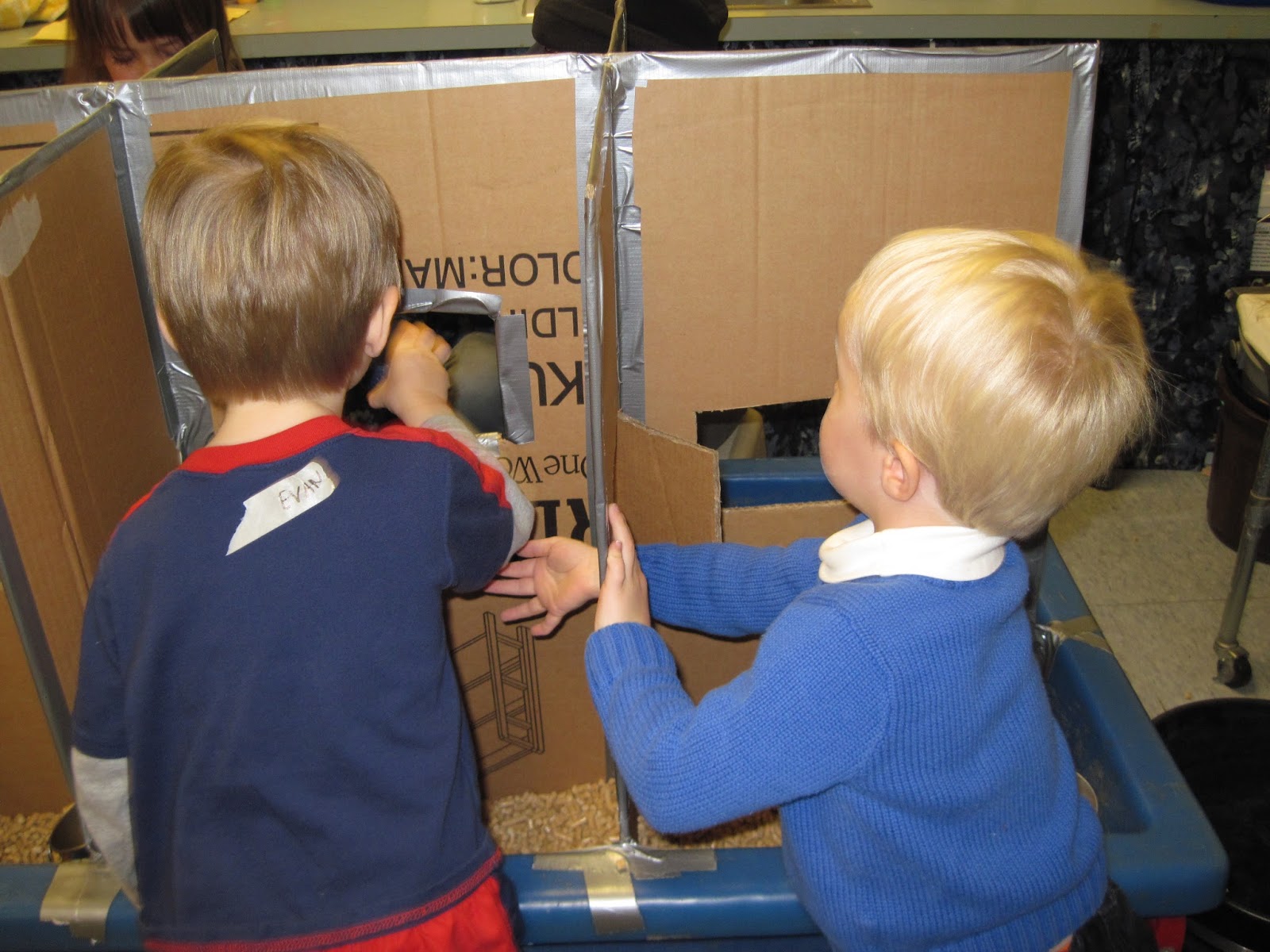 I started out to make a simple apparatus to partition the sensory table to cut down on the squabbles.    Once the children got ahold of it, though, it became dynamic.  Part of that was because of the spaces it created, but the biggest part was what the children did in, around, and through those spaces. The apparatus was not so dynamic as the children who played with its potential to spawn unique types of play.  And for some reason, the squabbles were pretty much a thing of the past.  Not bad for a couple of pieces of cardboard.