The following apparatus takes advantage of axiom #5 on the right: Children are compelled by nature to put things in holes.  This apparatus is basically a piece of plywood with holes that creates a cover over the sensory table with space underneath. 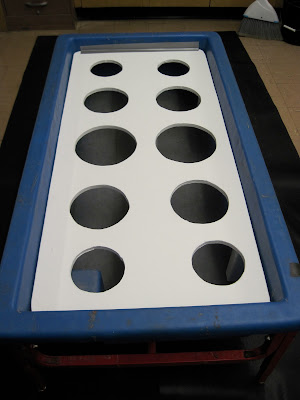 I took a piece of 3/8 inch plywood and cut it so it would fit two inches deep into the top of the table leaving seven inches of space between the piece of plywood and the bottom of the sensory table. In my sensory table, the sides slant in slightly so the apparatus fits snuggly into the table.  For extra support, I used strips of wood as braces so it would not bow in the middle and added legs for extra stability. 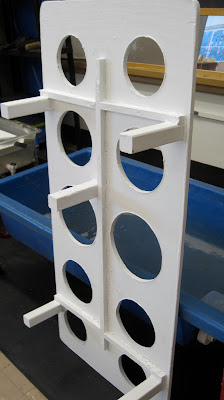 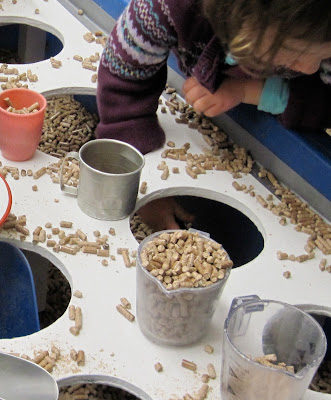 Another nice feature of this apparatus is that the cover and holes serve an additional function. The cover is also a place on which to set containers so the children can fill them without having to hold them. 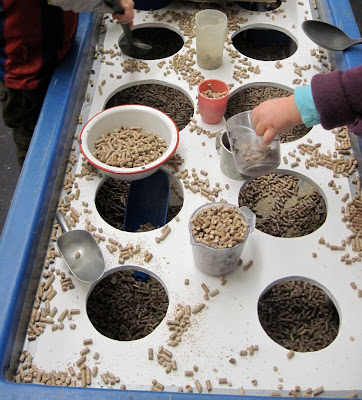 And the holes are also places to hold containers.  Some of the pots and pans fit nicely into the holes and others are propped by their handles. 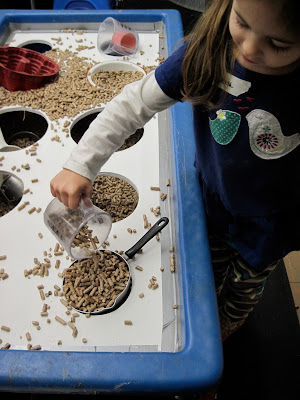 Here is a video of a child using the apparatus.  There are lots of good things happening in the video, but watch near the end how he changes the tempo of his actions so he more carefully pulls the pellets out of the hole so he is able to keep the pellets on his spoon before depositing them in a bowl.
What determines from which hole a child takes pellets or into which hole he pours?  Watch.
Is there a rhyme or reason why a child chooses one hole over another?  This video shows that some of it is trial and error.  The measuring cup did not fit into the smallest hole so the child had to scoop from a hole into which the measuring cup fit.  Other than that, does a child just use the holes that are close?  No, because many times children will stretch across the table to scoop from another hole.
Even though I ask the question, it is less important to me than observing and recording the myriad of operations the children concoct.  When you watch the next video, see how many different operations you can see from this one child in less than a minute.
He begins by pulling his pot of pellets out of a hole.  He does a swirling motion and watches and listens as the pellets tumble in his pot.  With a little shake and then a bigger shake he empties his pot.  Did you catch his little smile at the end of this first set of operations?  He then reaches in a hole to get pellets with his scoop.  As he does that, the hand with the pot swings in behind him and down for balance.  As he carefully pulls out the pellets, he swings his scooping hand over to the pot hand in a fluid motion and pours the pellets into the pot.  He got them all in the pot and the pot wasn't even over the table in case some missed.  As soon as he completes the transfer of pellets, he immediately empties the pot over the table.  Did you catch his little smile again?  Now he takes his pot and puts it in a hole to collect some pellets with the pot.  As soon as he pulls out the pot, he dumps them right back into the same hole.  He then leans in and gathers pellets with his scoop again.  As he does that, he lays the pot on the cover apparatus and holds his left hand up for balance.  Even his fingers in his left hand seem to be helping him balance.  He very carefully pulls out the pellets making sure not to drop any. He pours them all in the pot.  He grabs the pot by the handle again and uses a back-handed flip motion to empty the pot in the table yet again.  All that in 40 seconds, a very fluid 40 seconds.
One just has to marvel at a child's ability to effortlessly experiment with fine and large motor operations in space and time with any given material and apparatus.
Posted by Tom Bedard at 12/10/2011