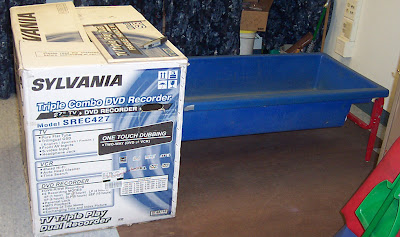 I attached it by cutting a rectangular flap on the side of the box adjacent to the table.  The top and two sides of the flap were completely cut through, but I only scored the bottom so I could fold it over and tape it to the lip of the table.  Since the lip was two inches wide, I actually scored it twice, once at the box and once where I wanted the flap to bend over the lip. 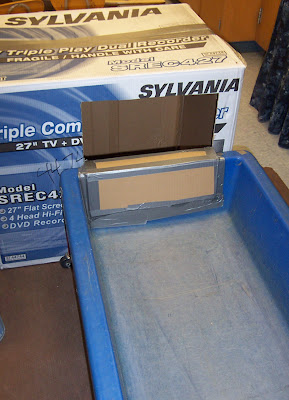 The reason it is taped is to keep it attached to the table so the children do not pull it away from the table. The hole is suppose to be a connection between the box and the table.

In addition, I cut big holes on three sides of the box not facing the table. 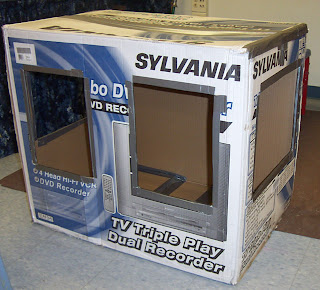 (If you look inside the box, you can see that all the loose flaps are taped down.  That gives the box a little extra strength and does not allow the medium to get under the inside flaps.

This apparatus creates two separate spaces.  The spaces are very different.  The space in and around the table itself is very open and bright.  The space created by the box is closed with less light.  They are, however, connected by a window that I thought would create action between the two spaces. 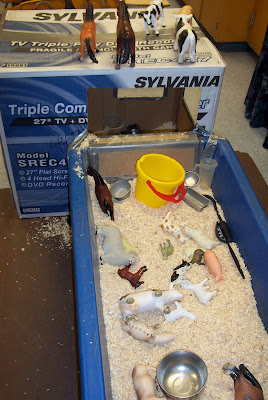 This apparatus was set up in my classroom over three years ago.  I thought the window would connect play, but as I look over my documentation, I do not have any pictures of the window as a catalyst for play between the two spaces.  Neither do I have a recollection of much exploration through the window.  As you can see in the picture below, two children are playing in the two different spaces totally oblivious to each other. 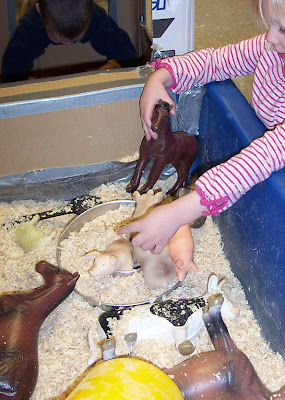 Maybe the window was too small or maybe the spaces were insular enough that there was litlle play between them.  I have attached other big boxes to the sensory table and cut a larger hole between the box and the table that has resulted in much more interaction between the two spaces.

Both spaces for this apparatus, though, were attractive for the the children.

Some played in the table. 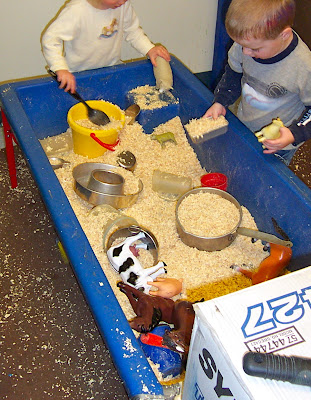 Some played in the box. 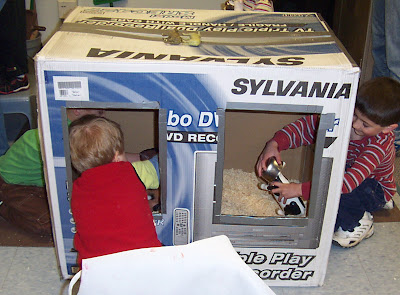 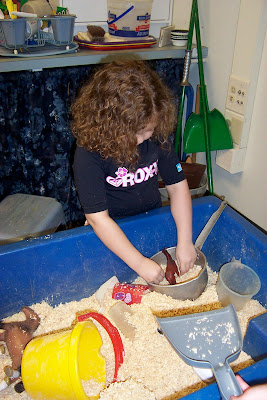 And in the box: 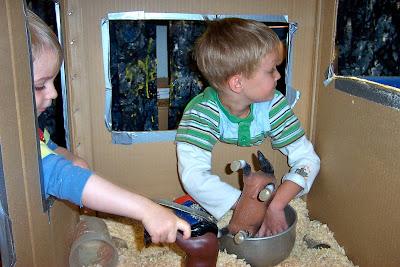 Though the play was similar, I think the experience of space was different.  Children get a different sense of space when they are standing at the table than when they are kneeling on the floor and putting their hands, arms, head, and torso into the box.   What I am saying is that an apparatus like this is teaching children about space because they experience space with their bodies.  And learning about space is fundamental to later academics subjects such as geometry.
Speaking of space, you cannot forget about the space on top of the box.  In the picture below, one of the children is working on the top of the box. 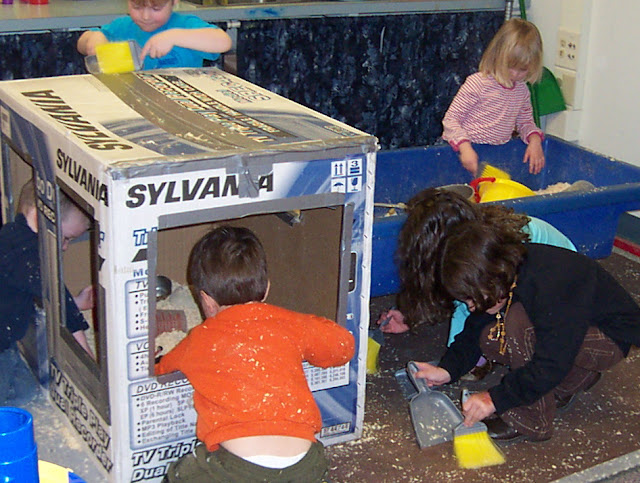 This picture actually shows all the different levels and spaces being used at one time in and around the table and apparatus: two girls are sweeping the floor (lowest level, flat/open space); two boys are in the box (a little higher lever, three-dimensional/closed space); one girl is playing in the table (the next highest level, three-dimensional/open space); and one boy is sweeping the top of the box(highest level, flat/open space).
Children naturally explore levels and spaces.  The more you provide, the more they will explore and discover.  That sounds a lot like Axioms 2 and 3 in the left hand column of the blog.
Just a quick note for those of you who follow my blog in Wisconsin and will be attending the Wisconsin Early Childhood Association conference October  20 - 22 in Appleton.  I will be presenting at the conference on Saturday afternoon on apparatus to build in and around the sensory table.  If you get a chance, stop by to say hello.
Posted by Tom Bedard at 9/22/2011