A rich space for thinking

In 2014, I built an apparatus I called the Box Peak.   I removed one side of a big narrow box and set it up over the sensory table in such a way as to create two large, open inclines. 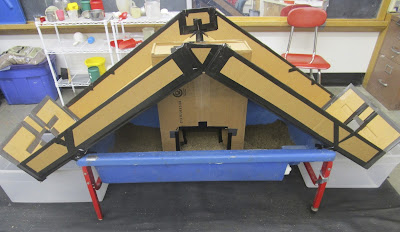 To make the whole structure stable, I embedded a box tower that supported the middle of the structure. 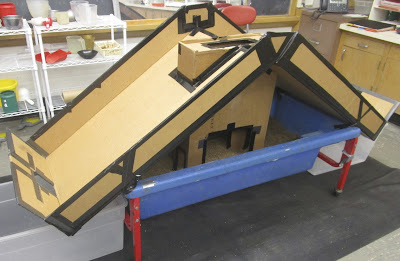 I built it so children could experience pouring sand down a wide incline.  I had done other big inclines, but not this wide and not this open.  I cut a hole in the bottom of each incline for the sand to exit through the bottom of the apparatus and drop into tubs resting on the floor underneath the holes.  However, the holes I fashioned were much smaller than the width of the incline adding an additional challenge for the children to direct the sand into the holes.

The reason I want to revisit this apparatus is because I want to demonstrate how the sensory table is a thinking space for both me and the children.   I have already offered my initial thoughts on the apparatus.  After watching the children engage with the space and materials, I decided to change the apparatus.  On one side of the apparatus, I installed a cardboard box that formed a chute for directing the sand into the hole at the bottom. 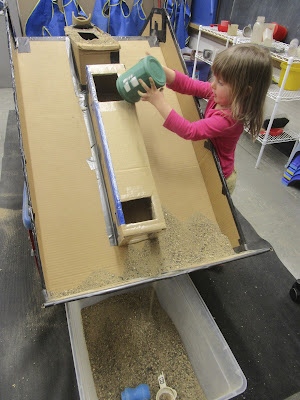 I cut two holes in the top of the chute, but purposefully kept its closed nature in contrast to the openness of the large box incline.   The closed nature of the chute also added an extra challenge for the children to track the sand traveling through the chute.  I also wanted to provided a second path for the children to pour the sand through the hole at the bottom of the apparatus.  The child in the video below illustrates the two paths quite nicely.

Putting sand in the hole two different ways from Thomas Bedard on Vimeo. 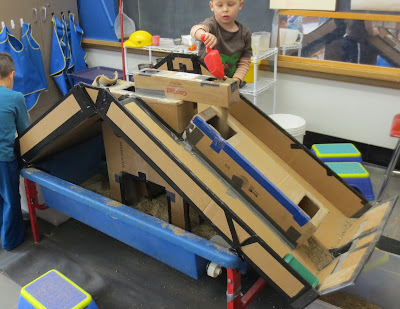 Once they had figured out the path of the sand, they came up with their own self-appointed task: to modify the path of the sand.  One child found a clear plastic tube and inserted it through the hole in the bottom of the apparatus up into the inclined chute. 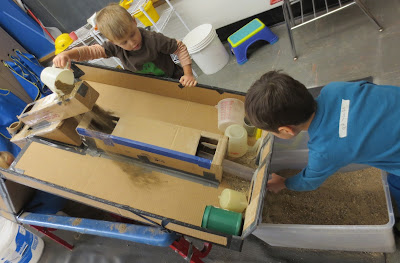 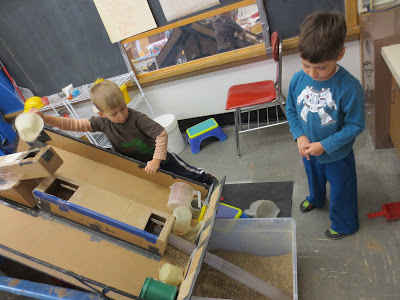 That led to a more articulated joint endeavor: filling the tube with sand through their modified path. 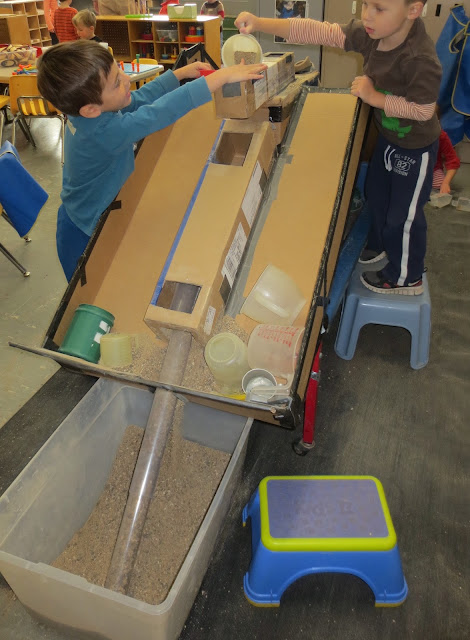 Using that one loose part and the affordances of the set up, the children changed the apparatus to fit their own evolving ideas.

My thinking begins with an idea of something I would like to build.  Once the apparatus is built, I turn it over to the children for their thinking.  Their thinking is doing; it is playing with ideas that surface in their actions.  Once I observe how the children think in this space, then I come up with new ideas that I try to realize.  Then it is the children's turn again, and so the thinking continues.  There is not script.  Ideas bounce around that emerge from our actions with others and with the materials and the setup.   In other words, this is a rich space for thinking for me and the children.