Here is a little story about a pump.  In April of 2014 I bought a Kodo Kids Pump Works set.  It was expensive but we had some money left at the end of the school year that needed to be spent. Besides, I thought that this might be the answer to my quest to have a hand pump in my sensory table. 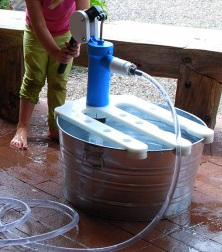 In the catalogue, this looked like an outdoor setup.  I bought it to use inside at the water table. Did you notice that I bought it in April of 2014?  I did not try to set it up until April of 2015.  That is a whole year of sitting in the box.  What took me so long?  It was, after all, a new plaything.  And for years, I had been dreaming about a setup with a pump at the sensory table.

Part of the answer is procrastination because of doubts about how well it would work.  I bought it not knowing if it would really fit into the table.  If it did not fit into the table, then would I have to build a stand for it?  My not knowing stopped me from even beginning the process of opening the box.  That is a poor excuse because I should have been more like the children who would have torn open the box immediately as if it were a present.

Let's fast forward to this spring when I actually did open the box to put the pump together. When I started to assemble the pump, I found there was a piece missing.  (Assembly, by the way, is simple and the website has a good video on how to put it together.)  The piece that was missing was a custom made washer that was critical for assembly.  What to do?  I asked my support person to call the company to see if we could get the part.  She did and she admitted that I had waited a year to open the box.  No problem, they sent me a new washer no questions asked. Thank you Kodo Kids.

I put the pump together at home without knowing if it would fit into the table.  When I got it to school and placed it in the table, I was pleasantly surprised: it fit perfectly inside the table and I could secure the handles of the tub with duct tape to keep it from moving.  All my fretting was for naught. 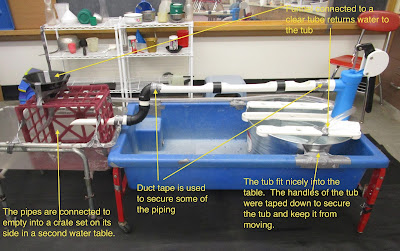 I went for a simple setup first.  I connected pipes in a straight line coming out of the pump traversing the blue table.  I did add two elbow pieces for a for a step-down into the crate anchored with duct tape in the second table. 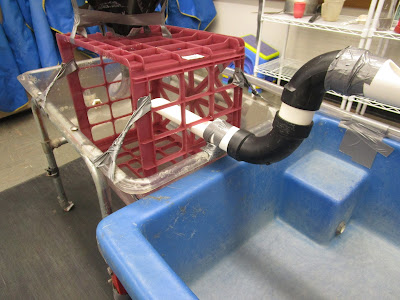 Because the lip of the second table is higher than the lip of the blue table, I had to made a slight adjustment to the height of the crate on the end where the pipe enters.  To do that, I took a small plastic pipe from a pipe manipulative and taped it to the bottom of the crate. 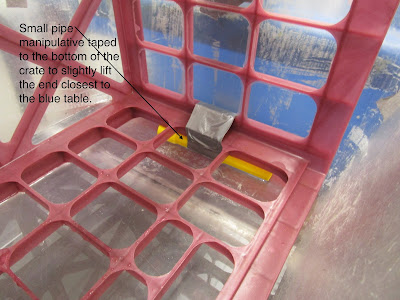 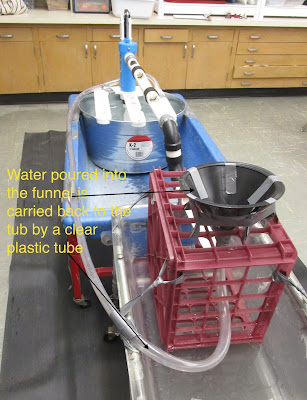 Below you can see where the clear plastic tubing enters the tub with the pump.  The purpose of this part of the setup was to create a complete water cycle within the apparatus itself. 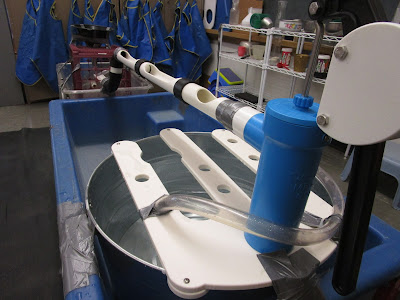 Was a year worth the wait?  Did the apparatus really work?  What types of operations emerged when the children had at it? 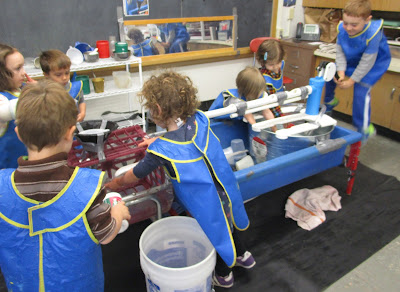 There is a point to be made about the year-long wait.  The year-long wait was a metaphysical place suffused with uncertainty.  That uncertainty made this place uncomfortable.  Uncertainty itself is not bad.  Rather, how that uncertainty affects actions and thoughts gives it value.  In this case, it was a handicap for me.  Once I embraced the uncertainty, I was able to move forward and actually became excited with the possibilities.