I am continually on the look out for a water pumps I can use inside at the water table.  I did find a hand held pump that I set out with the Duplo Ramp.  That pump worked well and provided children with many opportunities to explore how the pump worked and how to direct the water coming out of the pump.

I found a new pump this past weekend at Sears.  It is a siphon pump.  This pump takes water from the tub at the end of the table and pumps it back into the table through the attached hose. 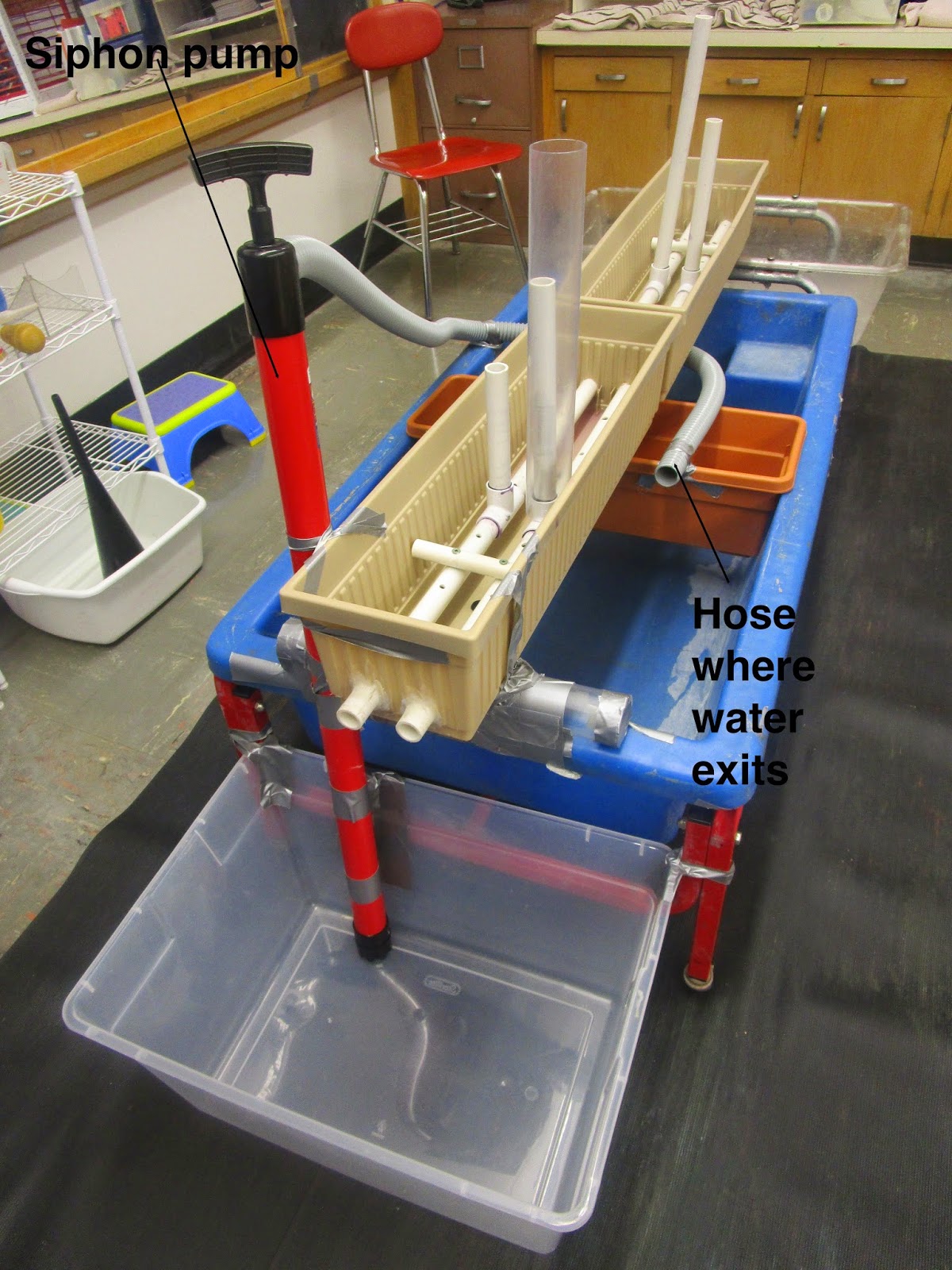 Did the pump help with reverse transporting?  Not very well.

In the first place, the pump was tall.  It is three feet high off the ground so for many of the children it was head high or higher.  Even though I would encourage children to stand on the stool, it was still high. 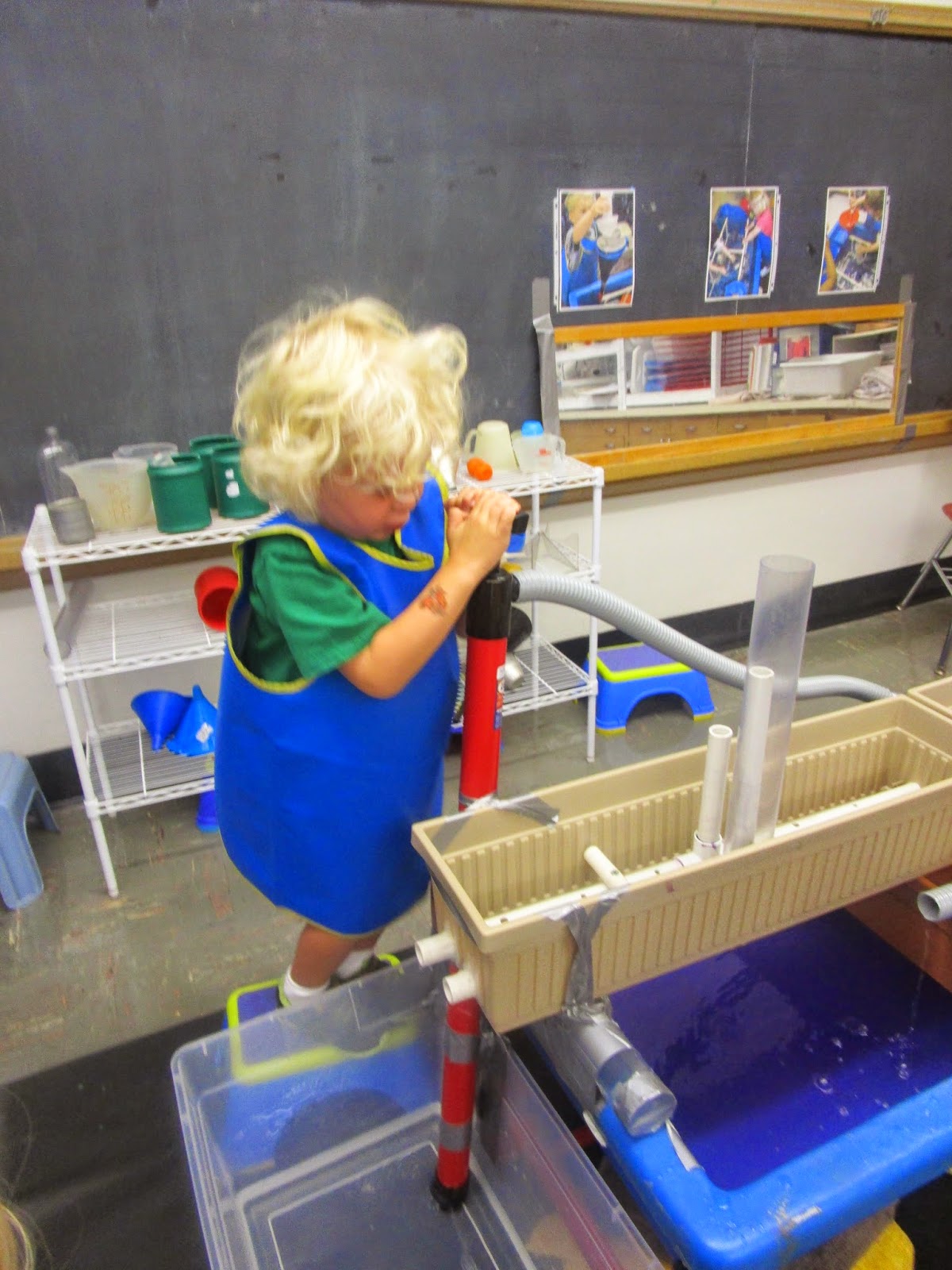 Pictured above is a five-year-old trying to work the pump.  Even on the stool, the handle is head high.  Can you see him straining?  That was a second issue: the pump was too hard for the children to operate.  Actually the down stroke was doable.  It was the up stroke that was hard and it was the one pulling the water up into the pump and out the hose.  I thought this might be a good opportunity for the children to work together trying to pull the handle up, but it was just too hard even when a couple of children worked together.

In addition, there were a couple of other problems that I had to work through.  One was how to tape the pump securely so the it would not move when the children tried to pump.  I re-taped the pump every day for five days until I came up with a tape job that was secure.  I taped the pump to the tray and to the table and to the tub. 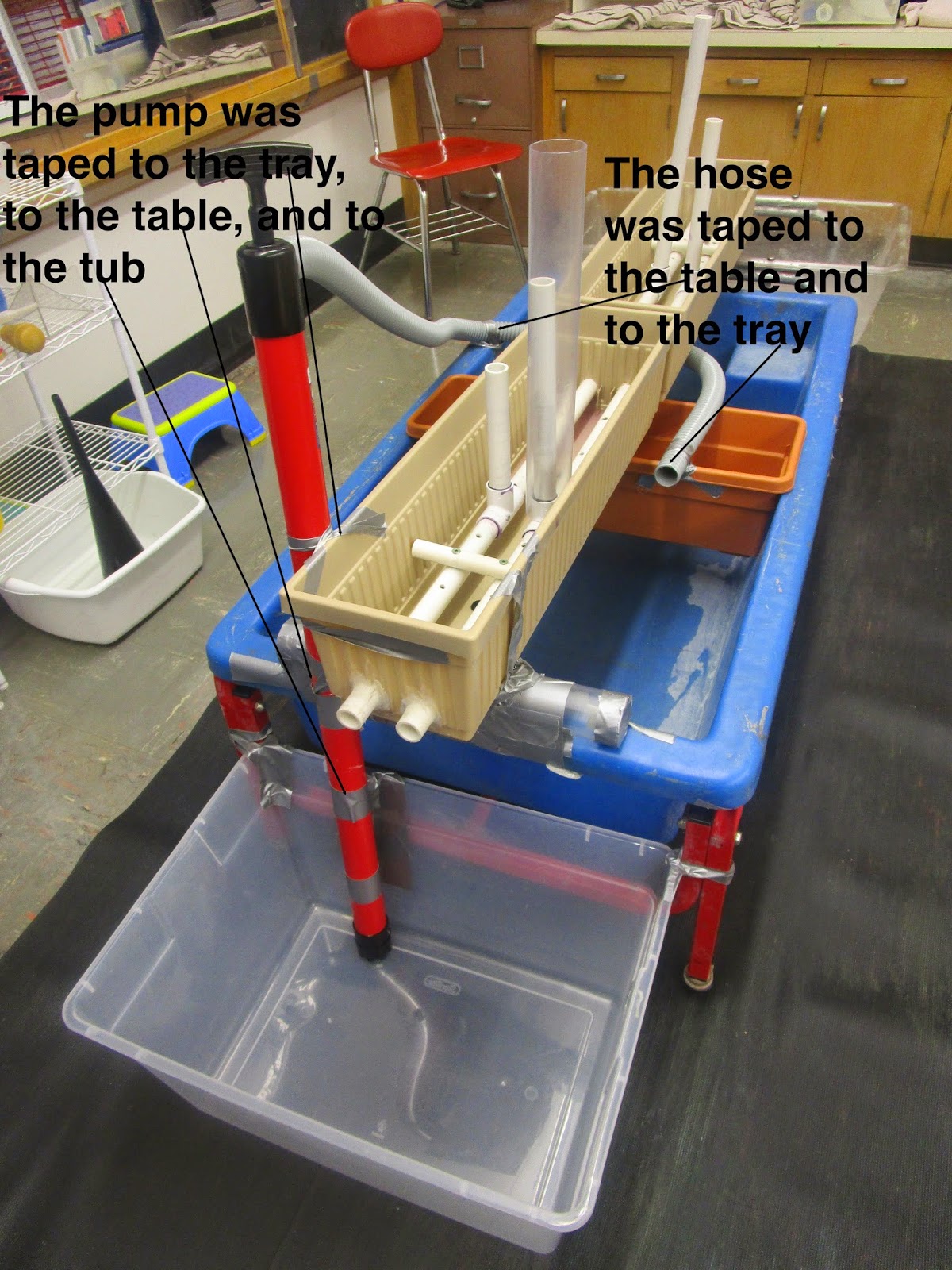 The second problem was the hose that carried the water out of the pump.  At first, I just let it loose because I wanted the children to be able to direct the water as it came out of the pump. The children did play with the hose, but it often got dropped onto the floor.  The result was a lot of water on the floor, actually too much water on the floor.  I tried many tape jobs on the hose, too, and finally settled on one that attached it to the table and to the support tray.

Why in the world would I write a post about something that did not work?

The reason is to give you a little insight into how I approach the building process.  For me it is not a once-and-done process.  I begin with an idea and I play with it in my head.  As I begin to build, I mess around* with the materials to see what works.  When the apparatus is completed, I have my own ideas what an apparatus will do.  At this point, I give it over to the children so they can mess around with it.  From my observations of the children working with the apparatus, I mess around with it anew.   I hope you can see where I am going with this.  My initial messing around gives way to their messing around which in turn provides me with new ideas for more messing around---and so the cycle continues.

In the case of the pump, I would say the whole process was not very successful.  That does not mean, I will totally give up on the idea of reverse transporting.  I will just have to do some more messing around.

P.S. I have to thank my colleague and mentor, Lani Shapiro, for the idea for this post.  We talk daily and she helps me process what is going on with my practice.  She pointed out that many teachers have a set idea about what is to happen in the classroom.  Not only that, their practice is then built upon doing everything in their power to make that happen.  She sees my work as one of continued experimentation and play based on children's exploration and play as they interface with the invitations I set up in the classroom.   In other words, my practice looks a lot like the children's play.  For me that is high praise.

*I am adapting the term "messing around" from the writings of David Hawkins in which he talks about the way children learn through "messing about" with rich and varied materials.