EVOLUTION OF A WORM SLIDE

The first Worm Slide I built was in 2004.  Someone recently asked me where do I get my ideas for the apparatuses I build.  I do not always know, but this one started out in a sporting goods store. I happened to pass by a clearance bin and saw a "bucket of bait" on sale.  I do not fish, but I thought that the  plastic worms and such---sans hooks---were something the children would dearly like to physically and mentally cultivate.  I could have simply dropped them into the water table for the children to poke, pull, scoop, and dump.  Since I had recently been working with narrow PVC pipes, though, I thought the pipes would make good conduits for the children to slide the worms down and out of the table

Here is the one I build in 2004.  It was a simple structure that had two narrow PVC pipes taped to an upside down planter tray and the lip of the table so the pipes are on an incline.   A tub is positioned at the end of the table to catch the worms dropping out of the pipes. 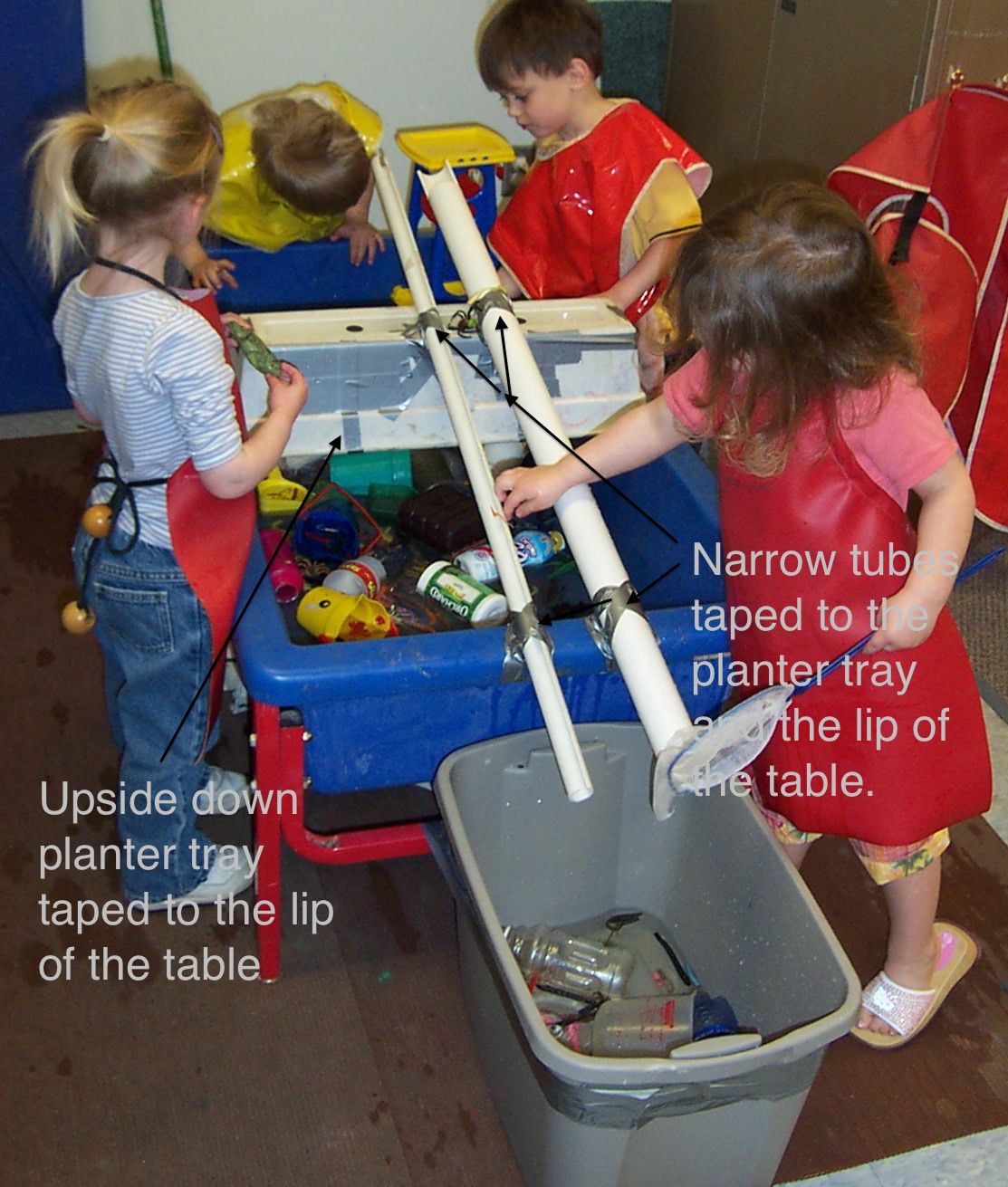 Here is the second one I built in 2007.  The pipes were threaded through a crate that is taped to two planter trays set inside the table.  This set up was very simple, too, but more stable. 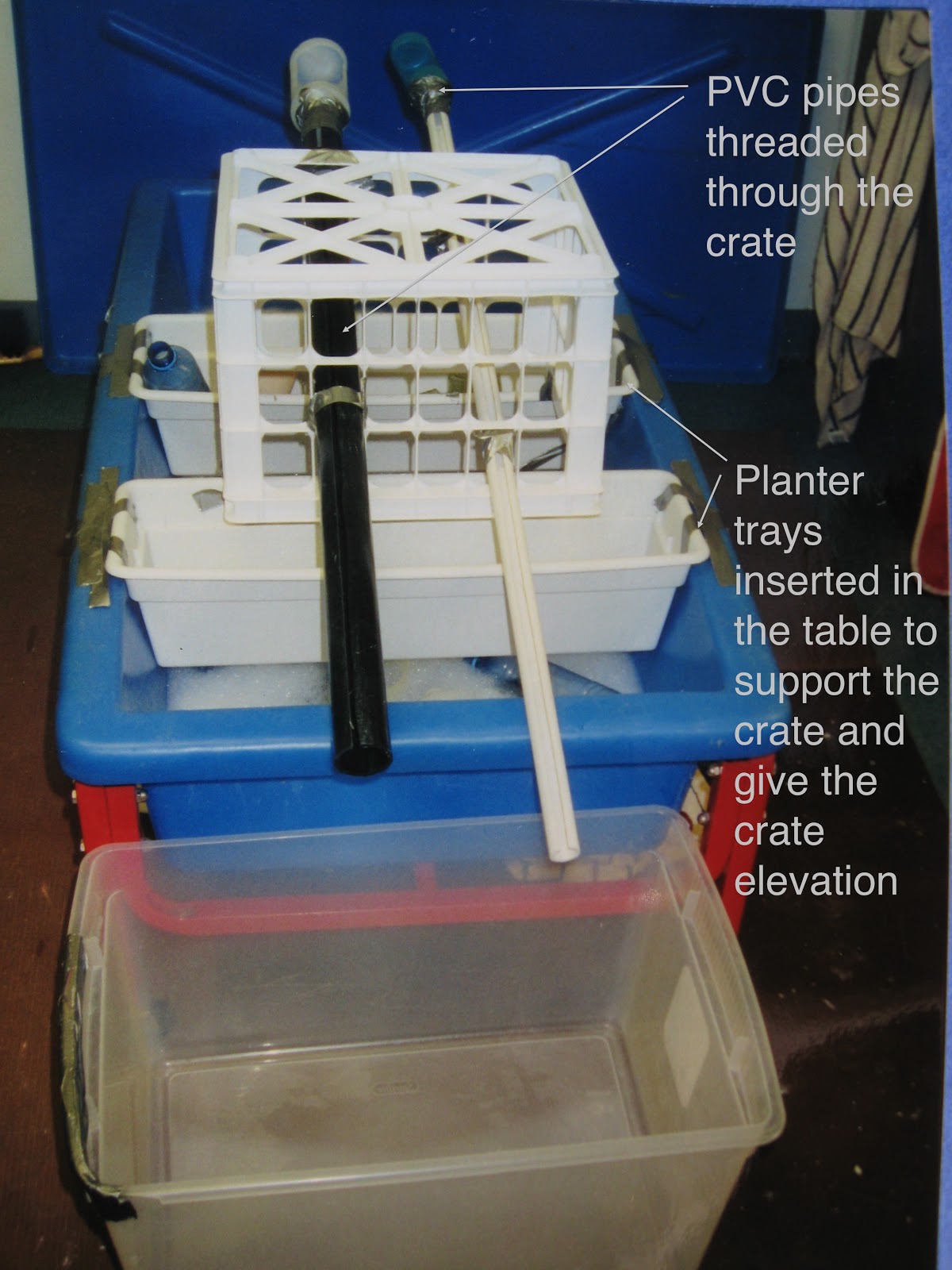 In 2011, I used a crate again; there were two modifications, though.   I replaced one of the narrow pipes with a wider plastic chute and I threaded a V-shaped piece of plastic through the crate so it directed the worms back into the table itself instead out of table into the tub next to the table. 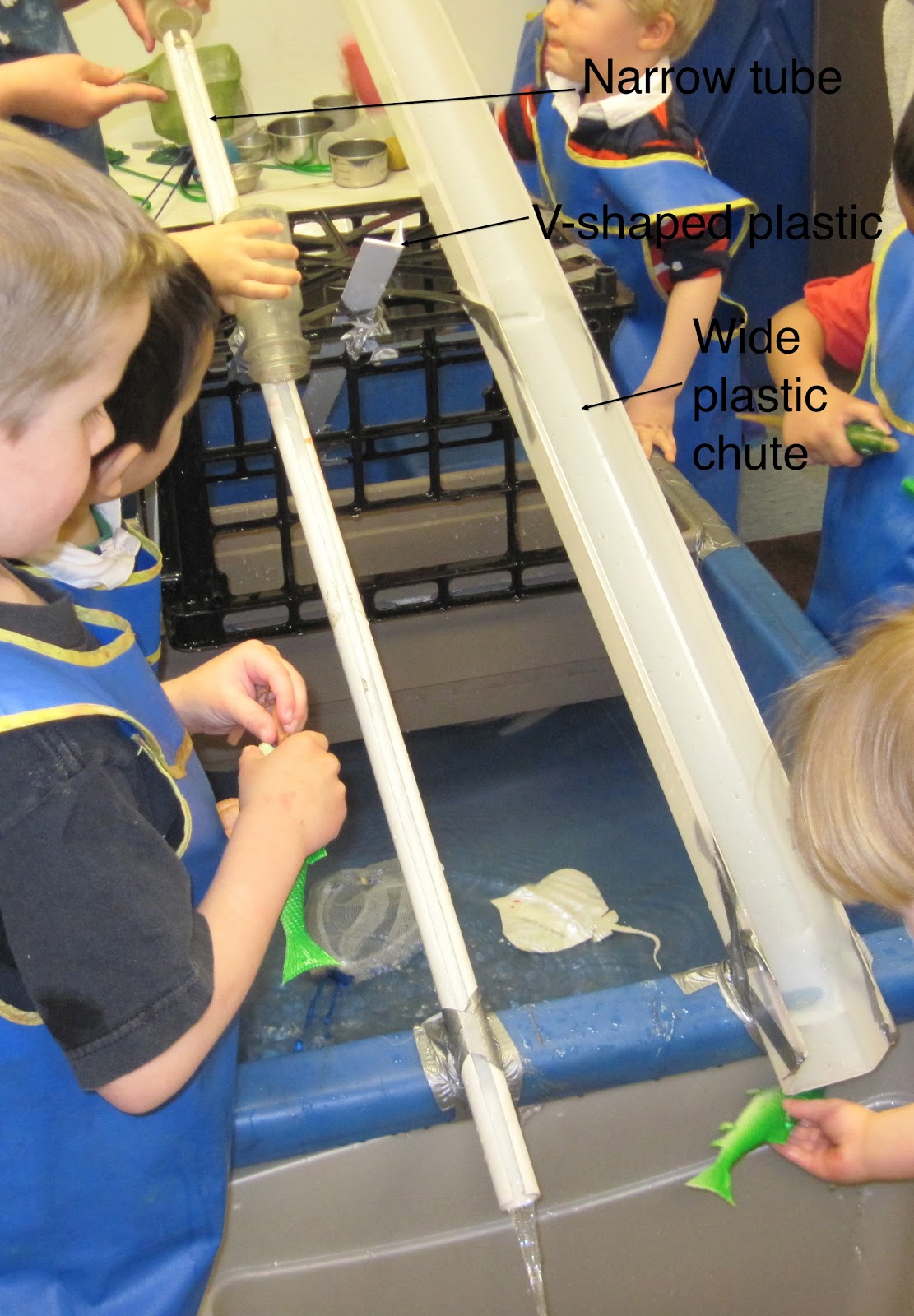 If you are interested, you can read more about this version from July 2011 here.

This year I created three versions over two days before I was satisfied.  The first one used a crate, the narrow PVC pipe, and the wide chute.  Two clear tubes were also added. 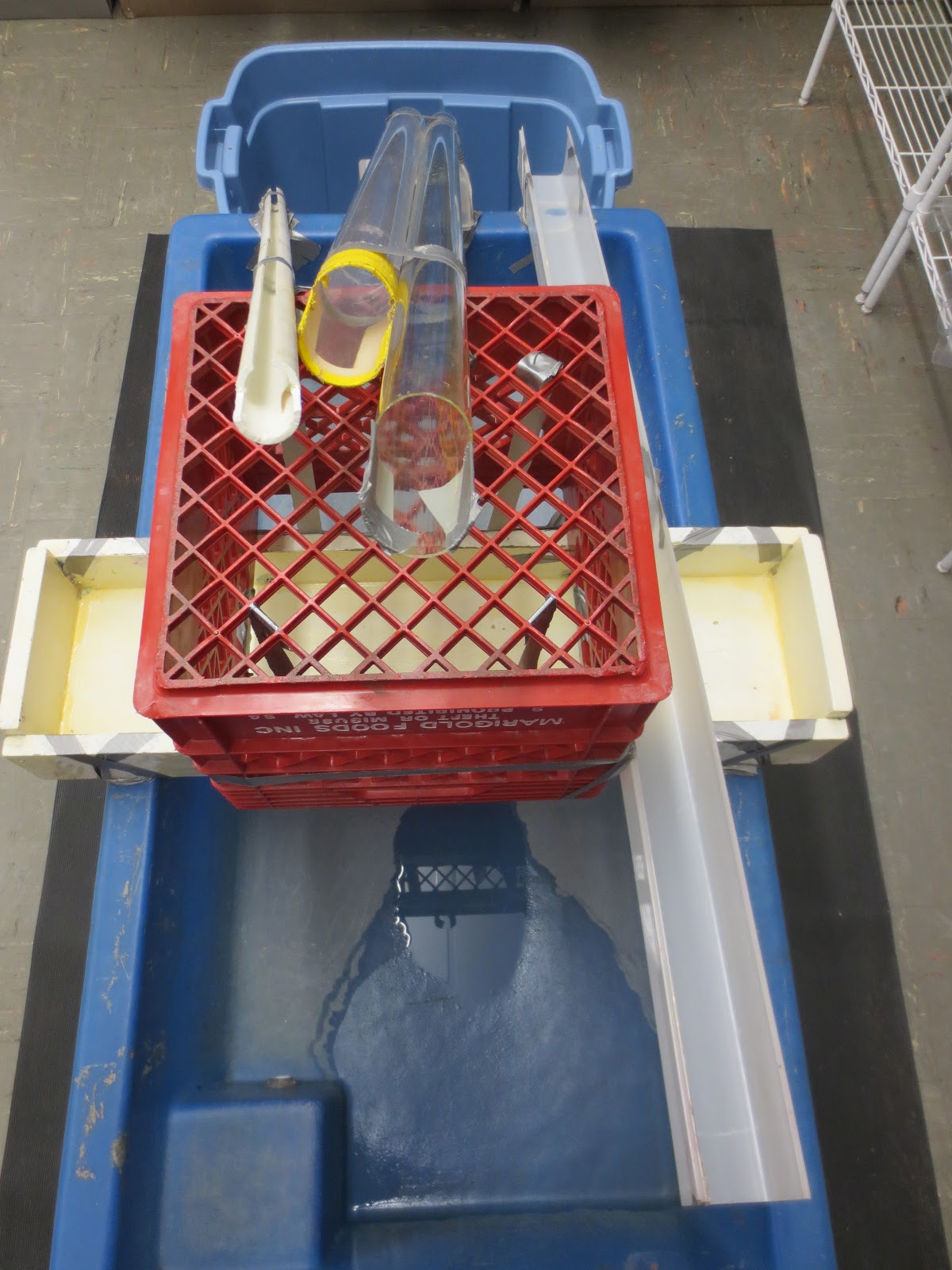 I had a clear plastic flexible tubing that I wanted to wind around the crate, but the diameter was too big to fit in the holes of the red crate.  There was also a problem with securing the clear plastic tubes.  I used a plastic container so the incline would not be so steep, but the plastic container proved to be unstable even with lots of tape.  In addition, I could not thread the narrow pipe through the crate to give  added stability to the structure. 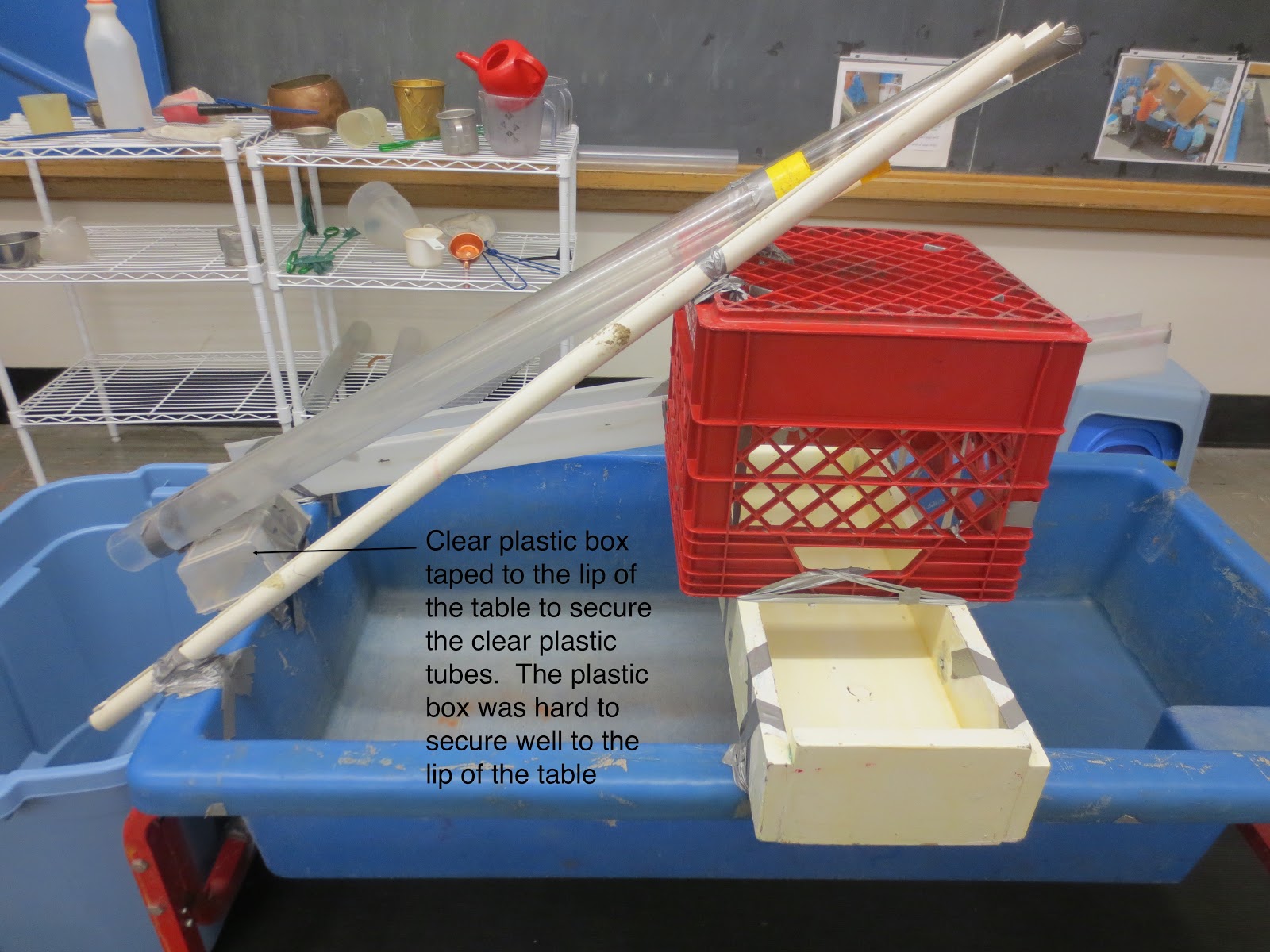 For the second version, I used a green crate that had round holes big enough to accommodate the flexible plastic tubing I wanted to add.  Before I even inserted this clear plastic tubing, though, I ran into problems securing the tubes to the crate.  I really wanted to thread the narrow PVC pipe through the crate for stability, but could not. 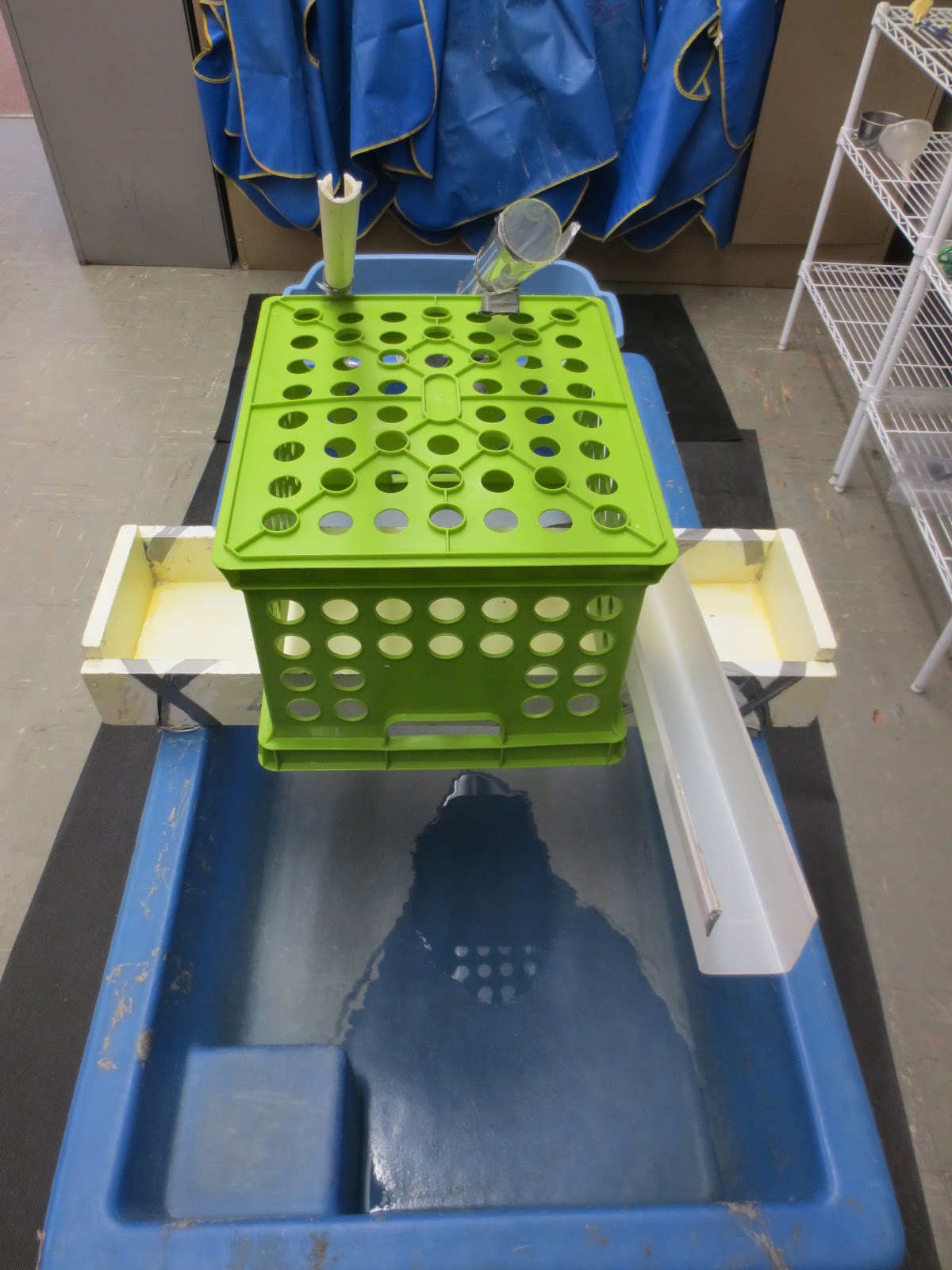 I actually abandoned this design even before the children had at it. 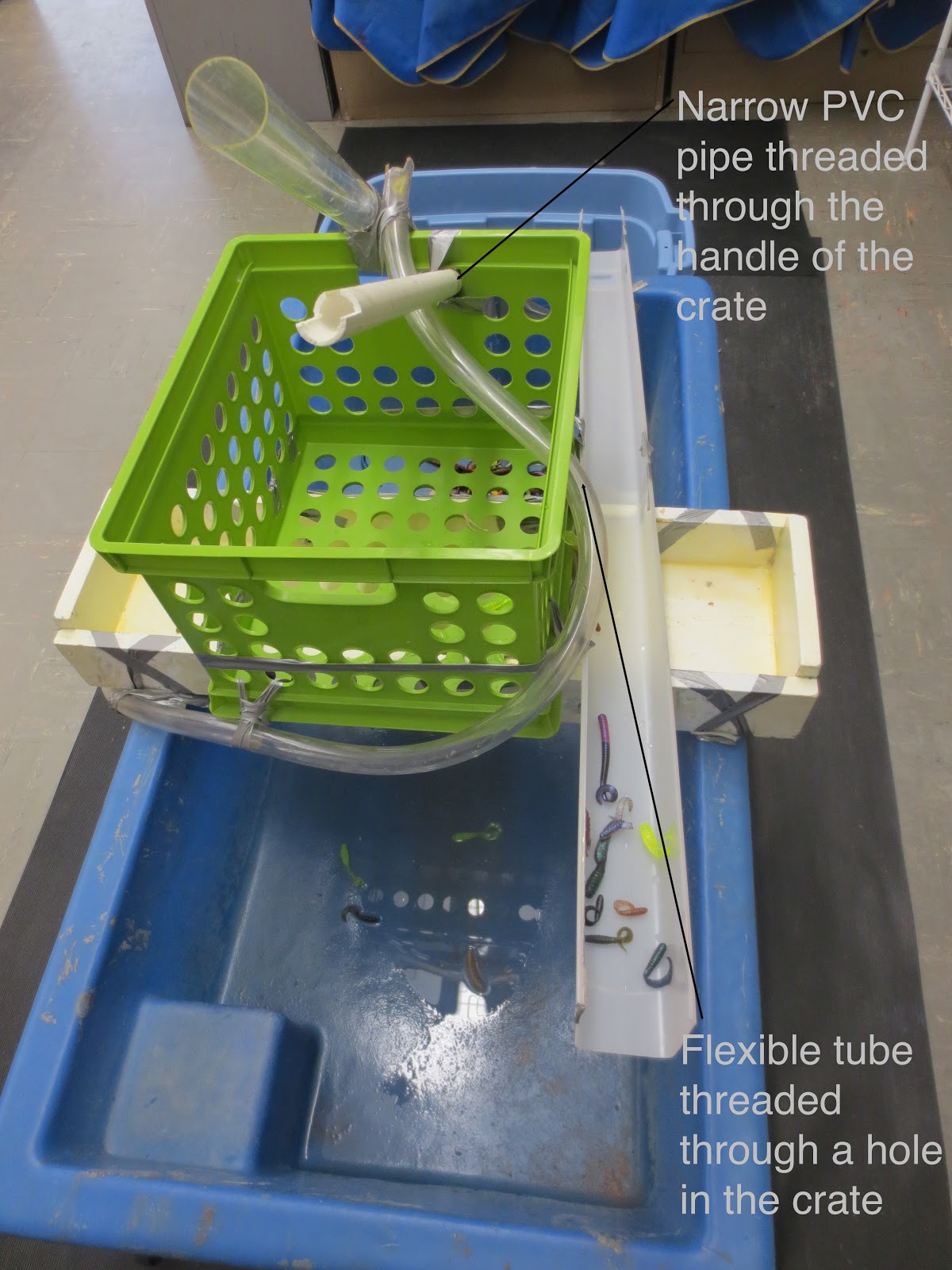 I wound the flexible tubing around the crate so it would empty into a 5-gallon bucket on the other side of the water table. 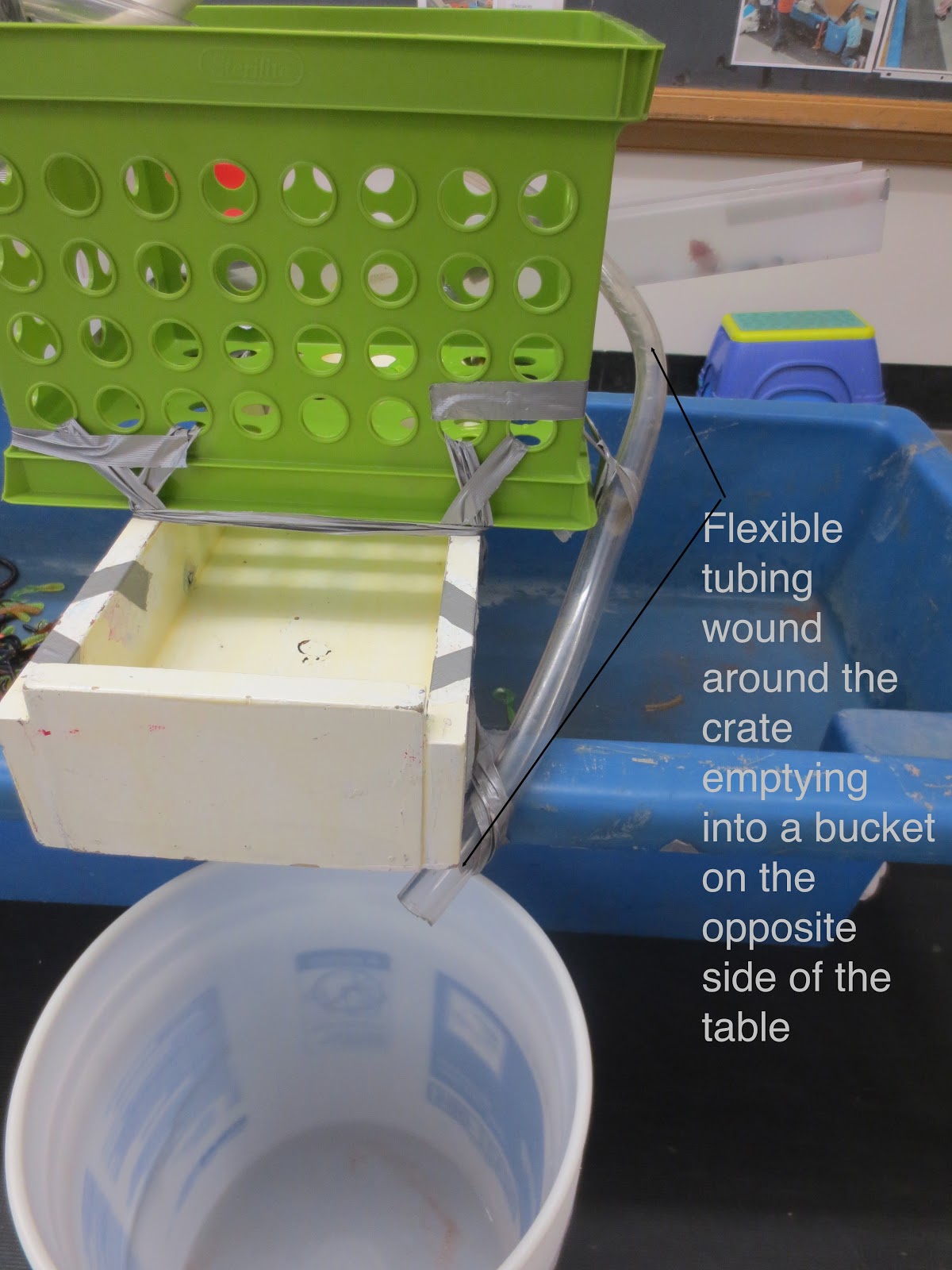 My worm slide now had all the features I wanted and it was secure.

This post gives you a little idea of the process I go through when building an apparatus.  I find I have to try things and experiment with different orientations and combinations of elements.  In the process of building, some things work and some things do not.  For me, an idea only takes shape in the actual building process.  In fact, if I tried to plan out every detail, I probably would never start.  One of the most important lessons I have learned from the children is that knowing is in trying and the doing.

Is it worth it?  Watch this video of this three-year-old pouring water into the tubing where he as placed a worm and you decide.

Where did it go? from Thomas Bedard on Vimeo.

Did you see him travel the path of the tubing with his body, eyes, and hand?  You can almost see the wheels turning in his head as he figures out: "Where did it go?"

The next step in the evolution of the worm slide will be a worm water park---next year.