This past summer, we moved my uncle from Florida to Minnesota.  The moving company has a type of big sturdy box that is called a wardrobe box.  The movers take what is hanging in the closet and hang it in the wardrobe box and then put the box in the truck.  After the move, I asked for the box.  I flattened it and put it in storage in my basement.  I took it out a few weeks ago to make a Big Box Incline. 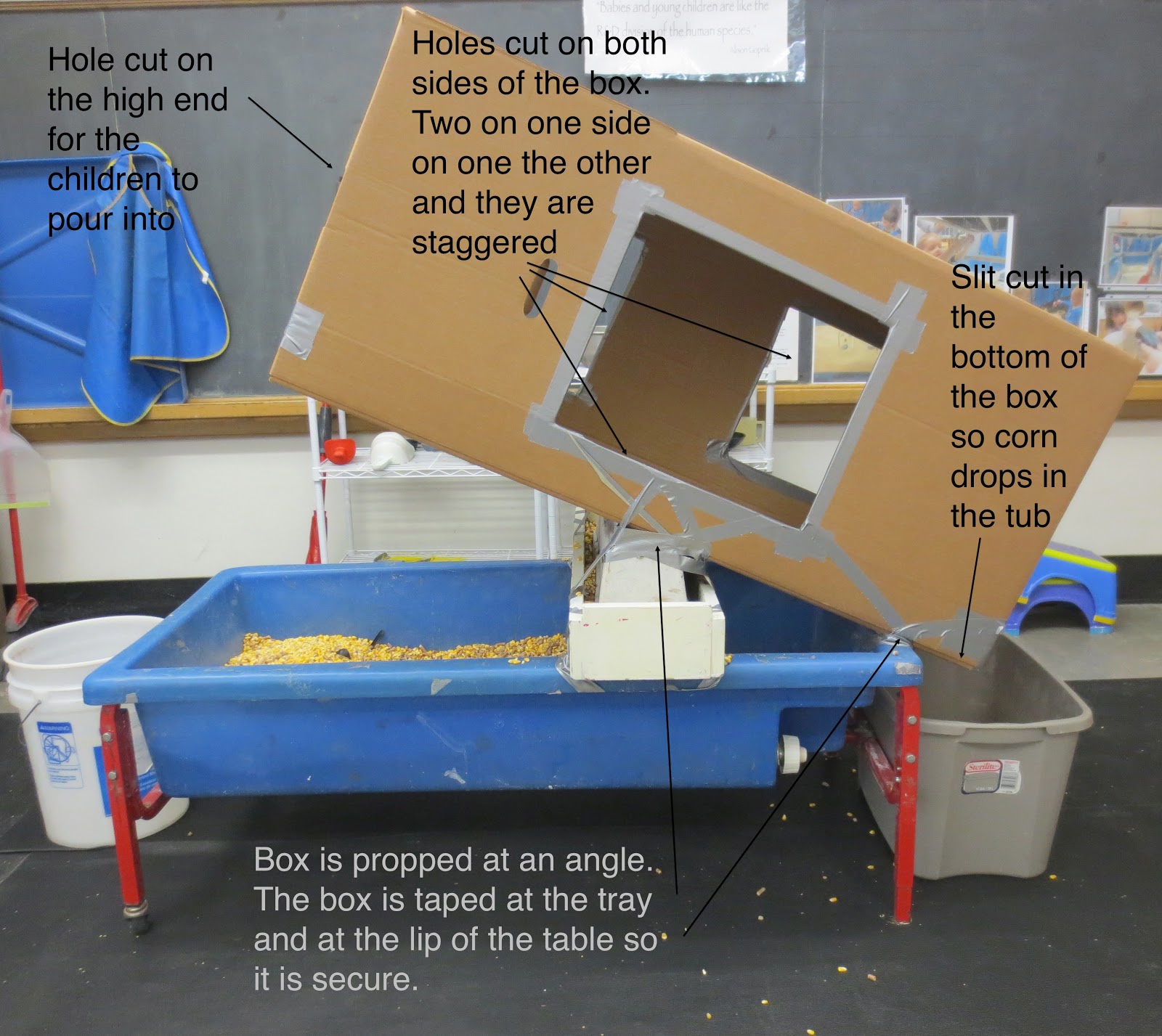 Here is a view from a different angle.  You can clearly see the big hole on the elevated end and the two holes on the other side. 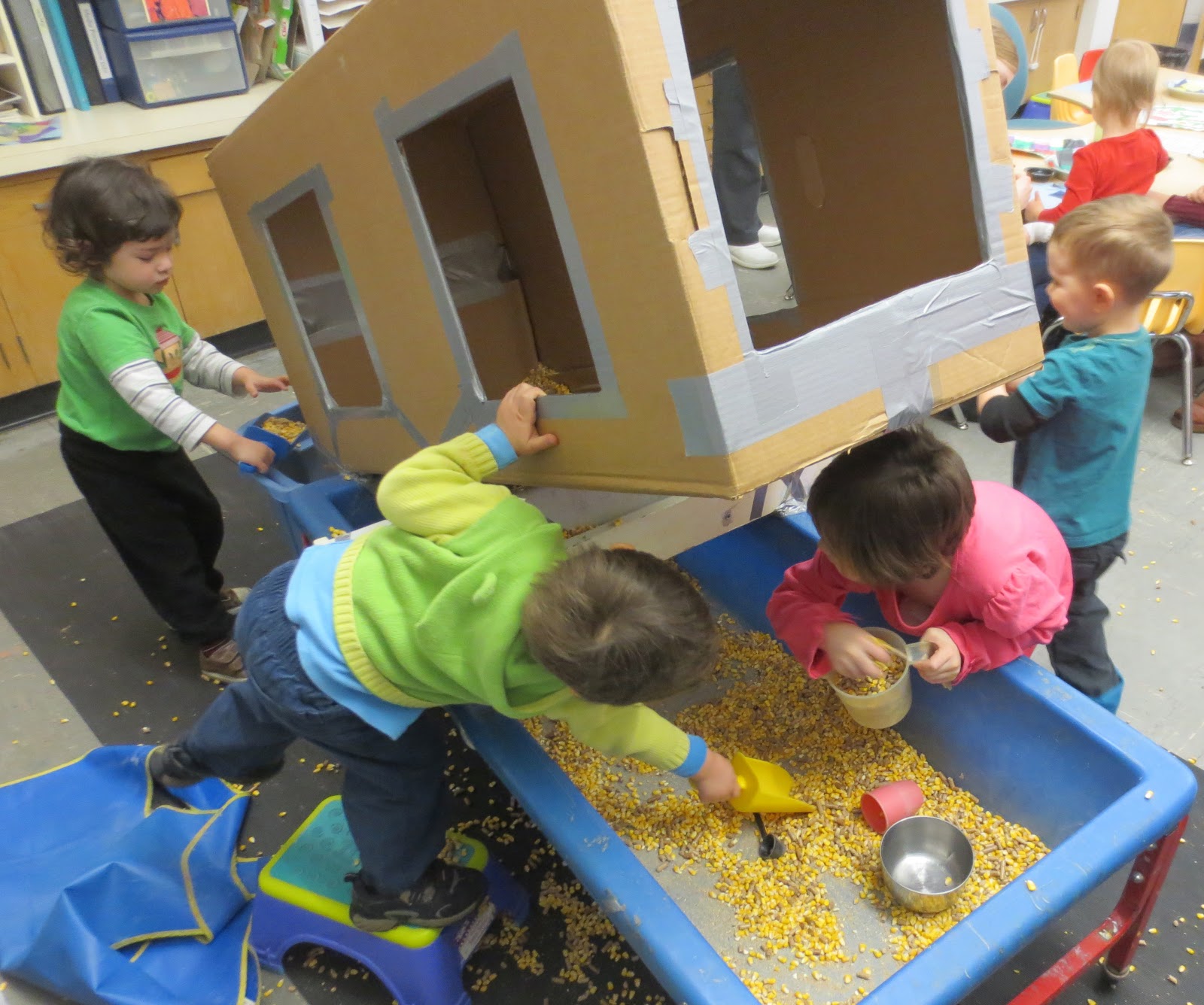 There was an initial design flaw for this apparatus. ( Design flaws are common for me; I have written about a couple of them for much different apparatus here and here.)  In this case, the design flaw has more to do with the setup than the box itself.  I initially put a tub that was too small at the end of the table to catch the corn falling out of the box.  The result was a lot of corn on the floor because as it hit the end of the box, it ricocheted through the slit on the bottom of the box and fell in the gap between the table and the tub. 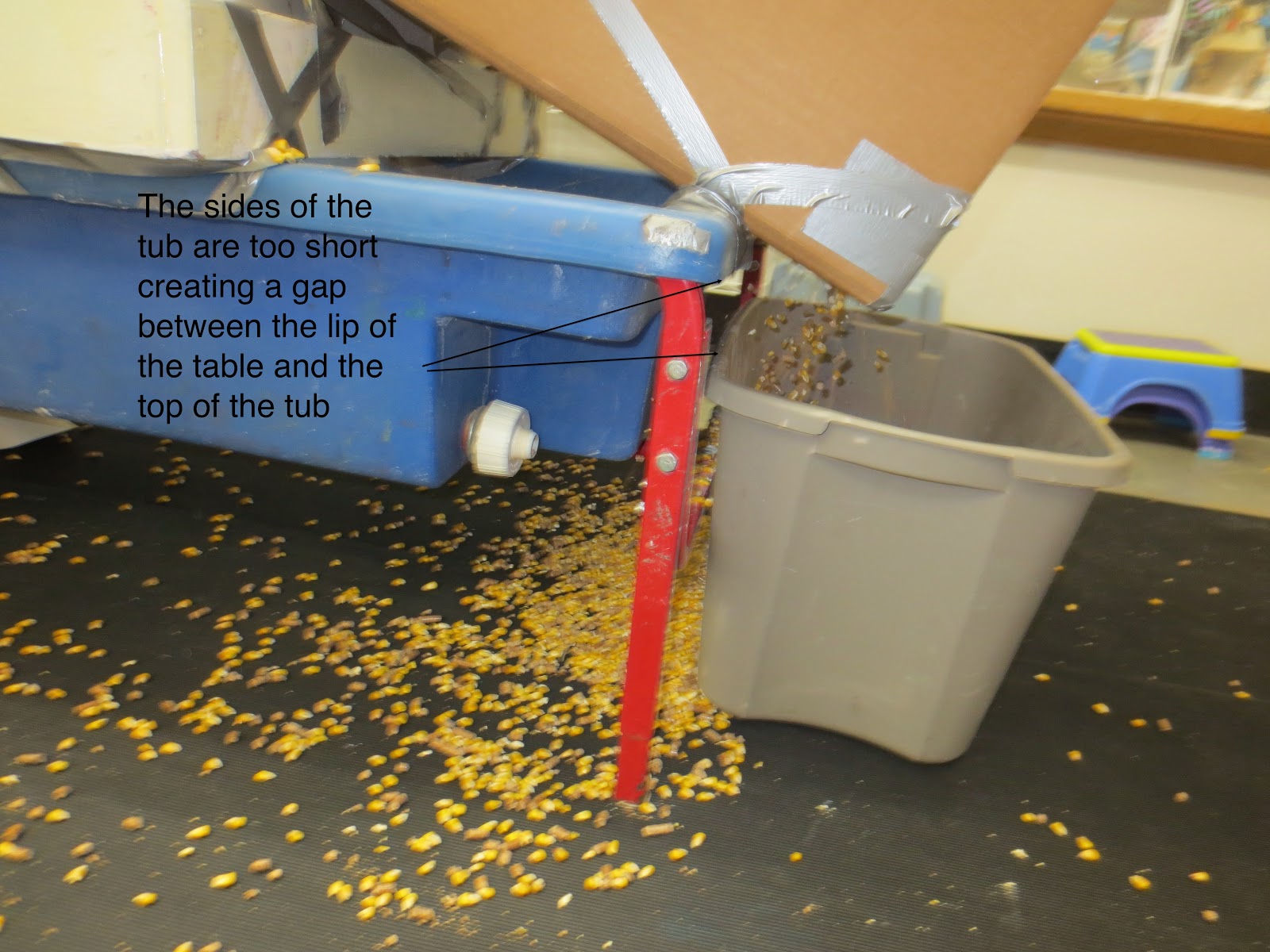 I was able to fix that flaw with little effort; I found a tub with higher sides.  That took care of the problem. 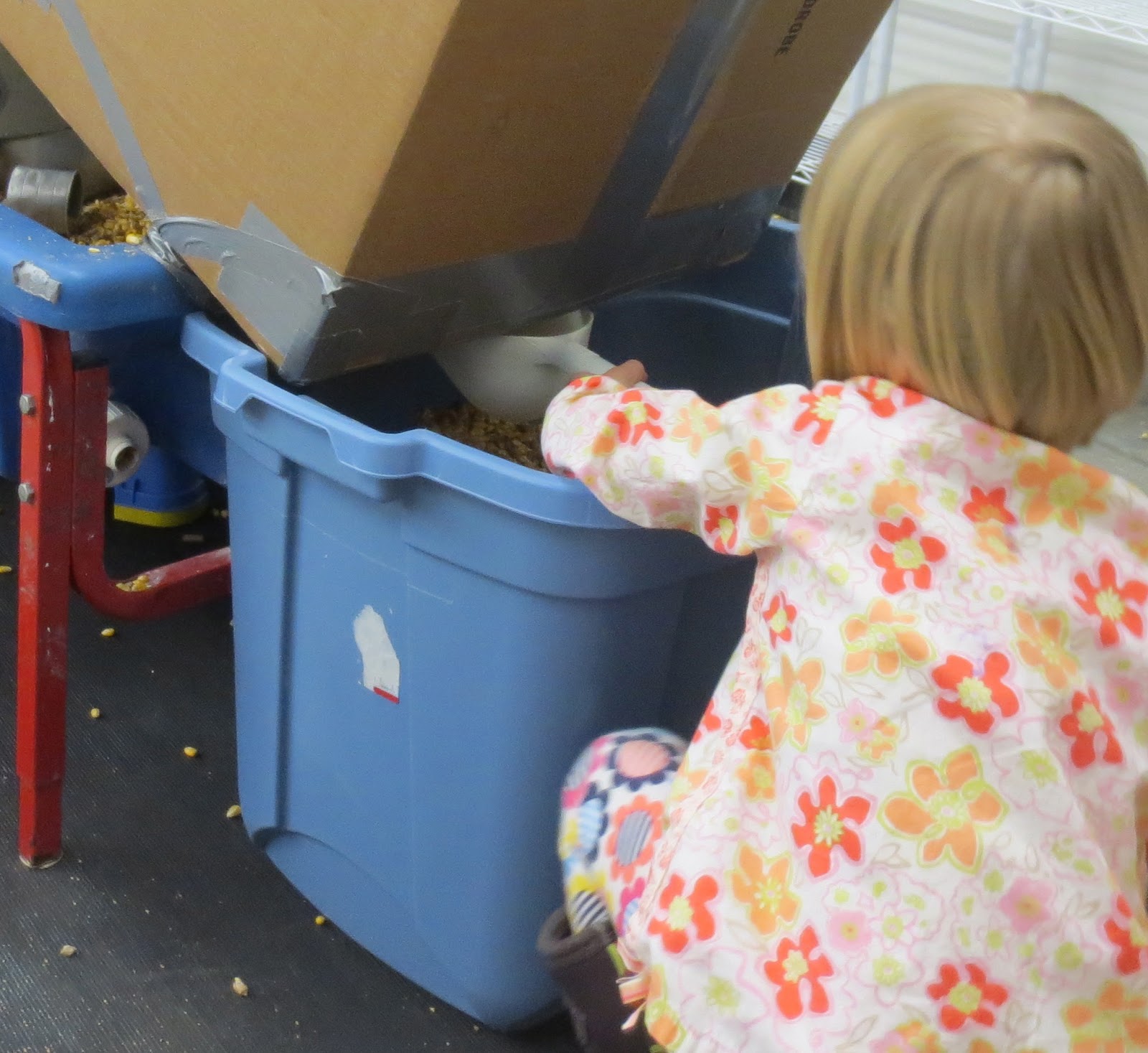 Some might think that the elevated end is a flaw because it is really quite high, especially for some children.  Look at this little guy at the end of the table using his little scoops to scoop up some corn.  Do you think he can reach the elevated hole? 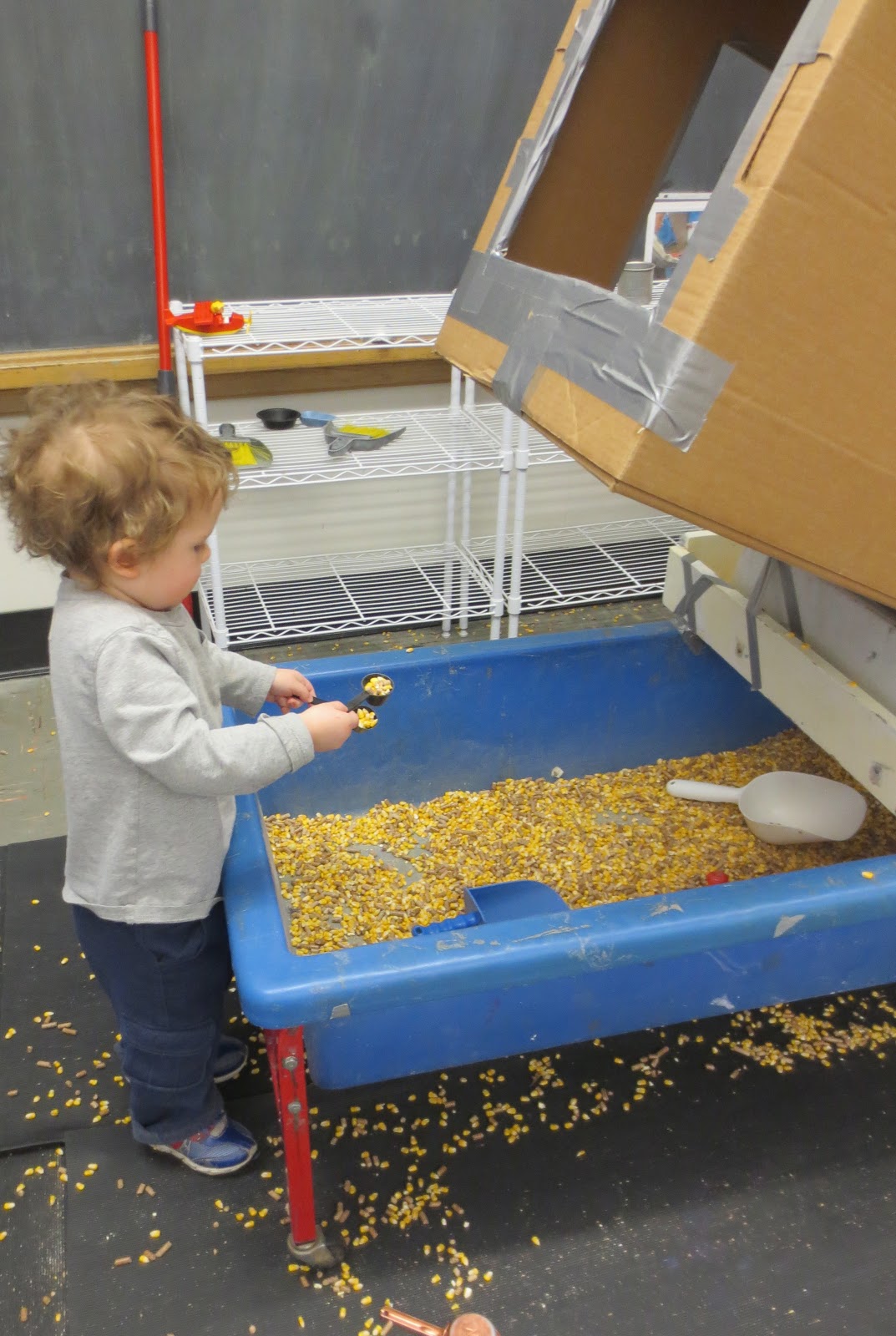 As you see below, he does reach the hole.  He exerts maximum effort to reach so he can drop the corn down the big box incline.  The child is working so hard, even his eyes are closed.  But he did it. I once had a mom who was an occupational therapist and she would say the child is realizing great "trunk extension."  Has your child had his trunk extension for the day? 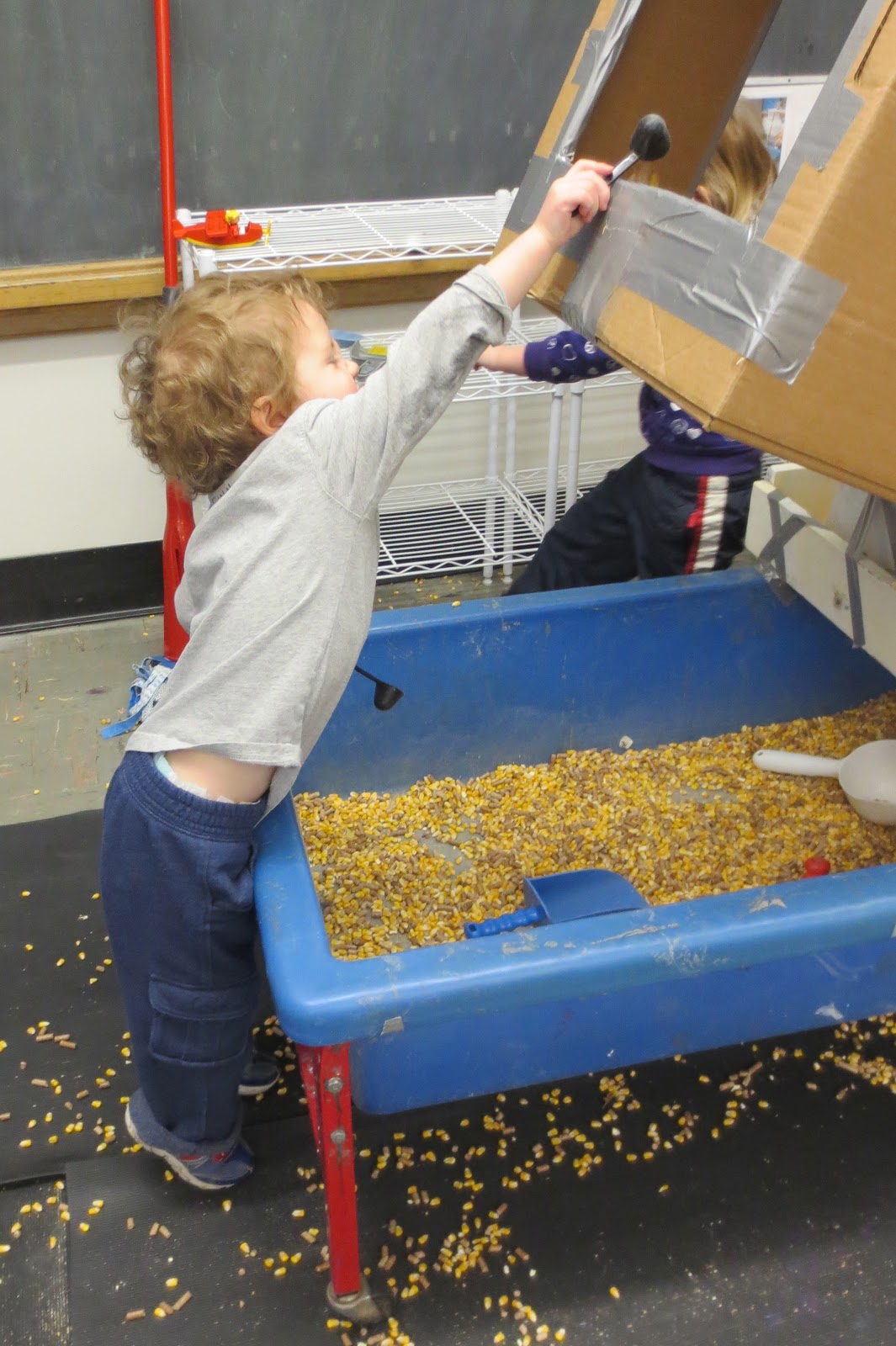 Since I embrace these physical challenges, I always have stools for children to use to extend their reach.  I offered this little guy a stool and he gladly accepted. 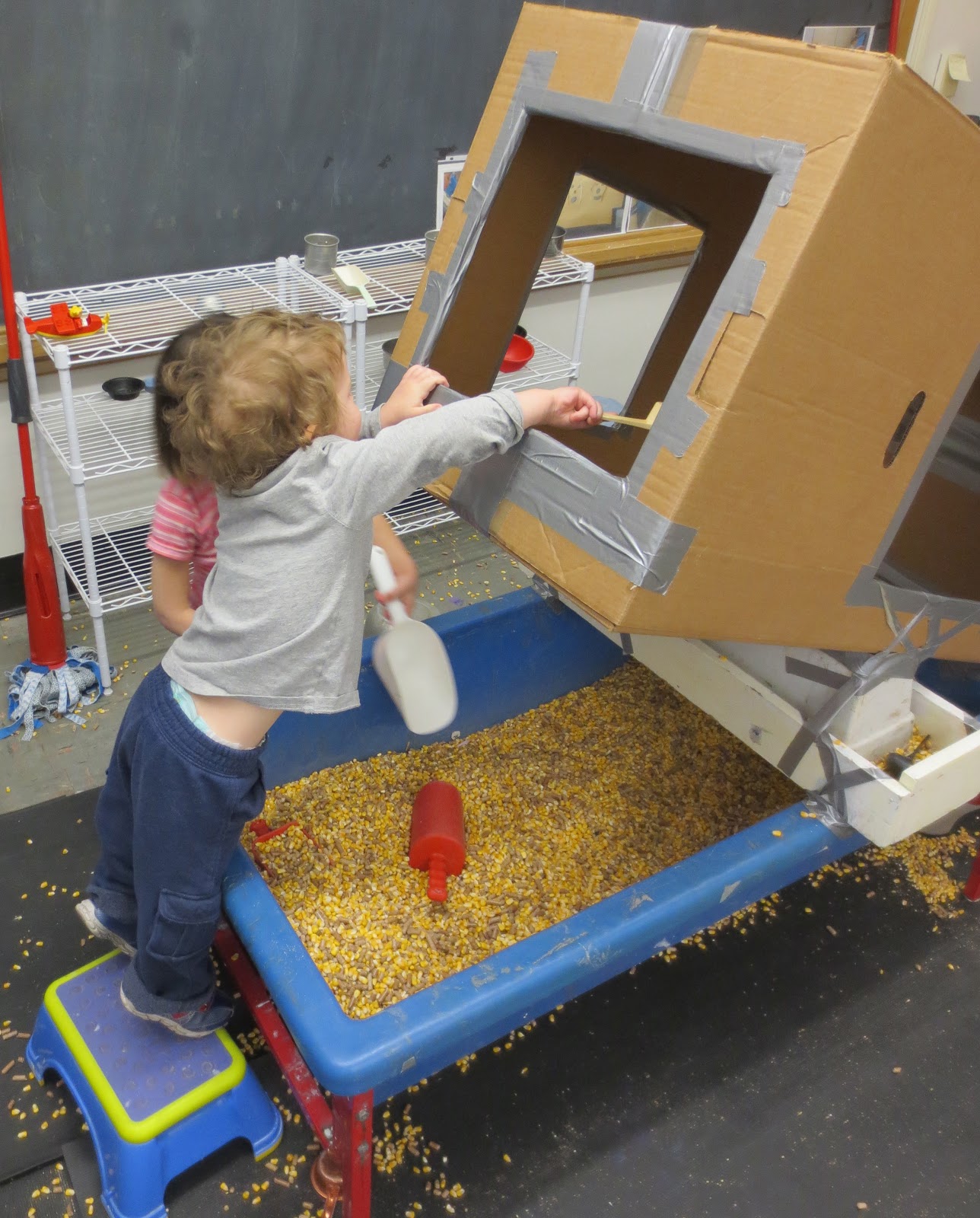 As you can see, it is still a significant physical challenge to dump the corn down the box.  Here is what it looks like from inside the box.  He can almost see what is happening---and it is not for lack of trying. 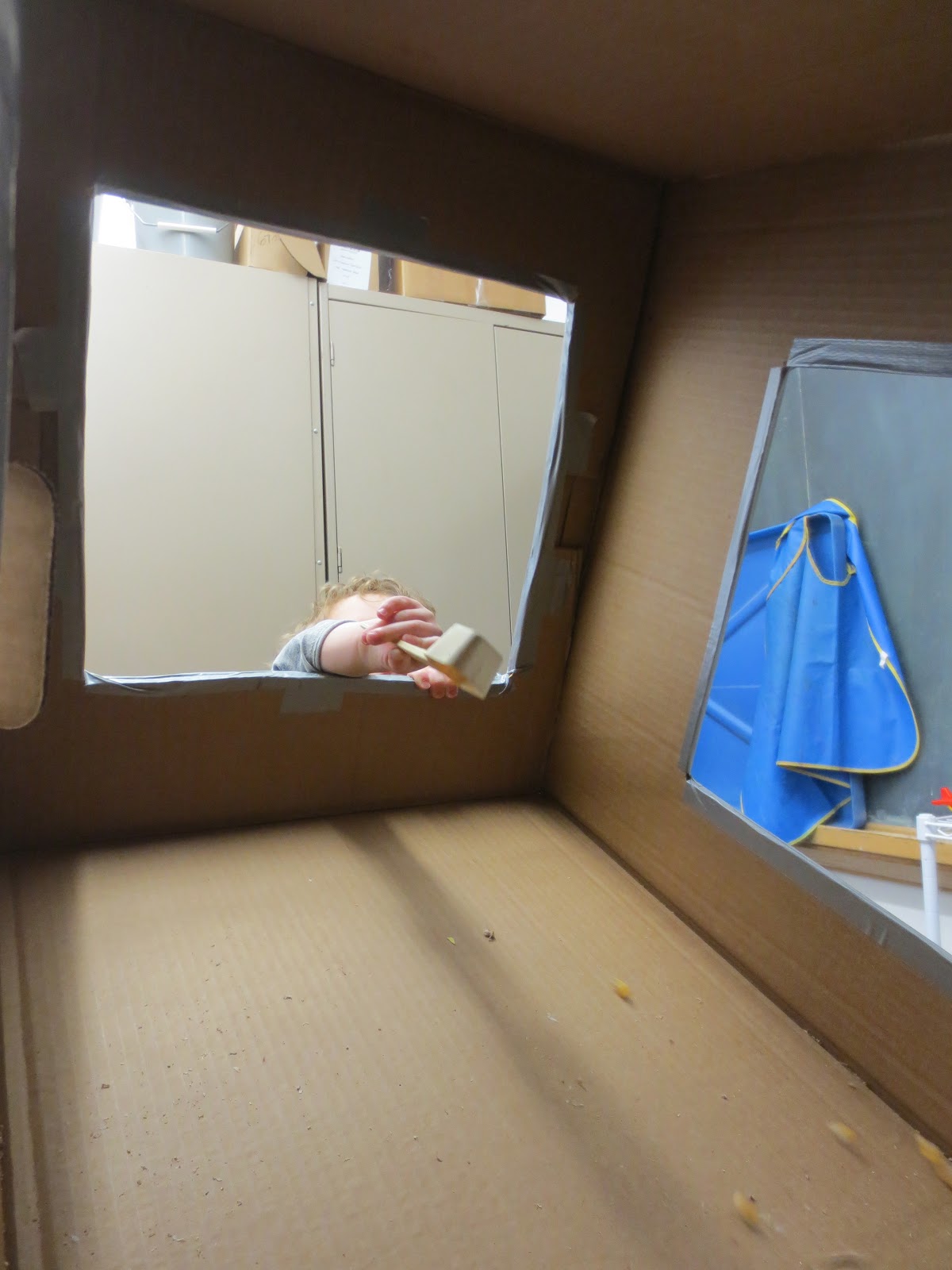 This little guy actually figures out a way to watch what happens when he drops the corn down the box.  He moves his stool to one side, and then watches the corn fall down the box from a side window. 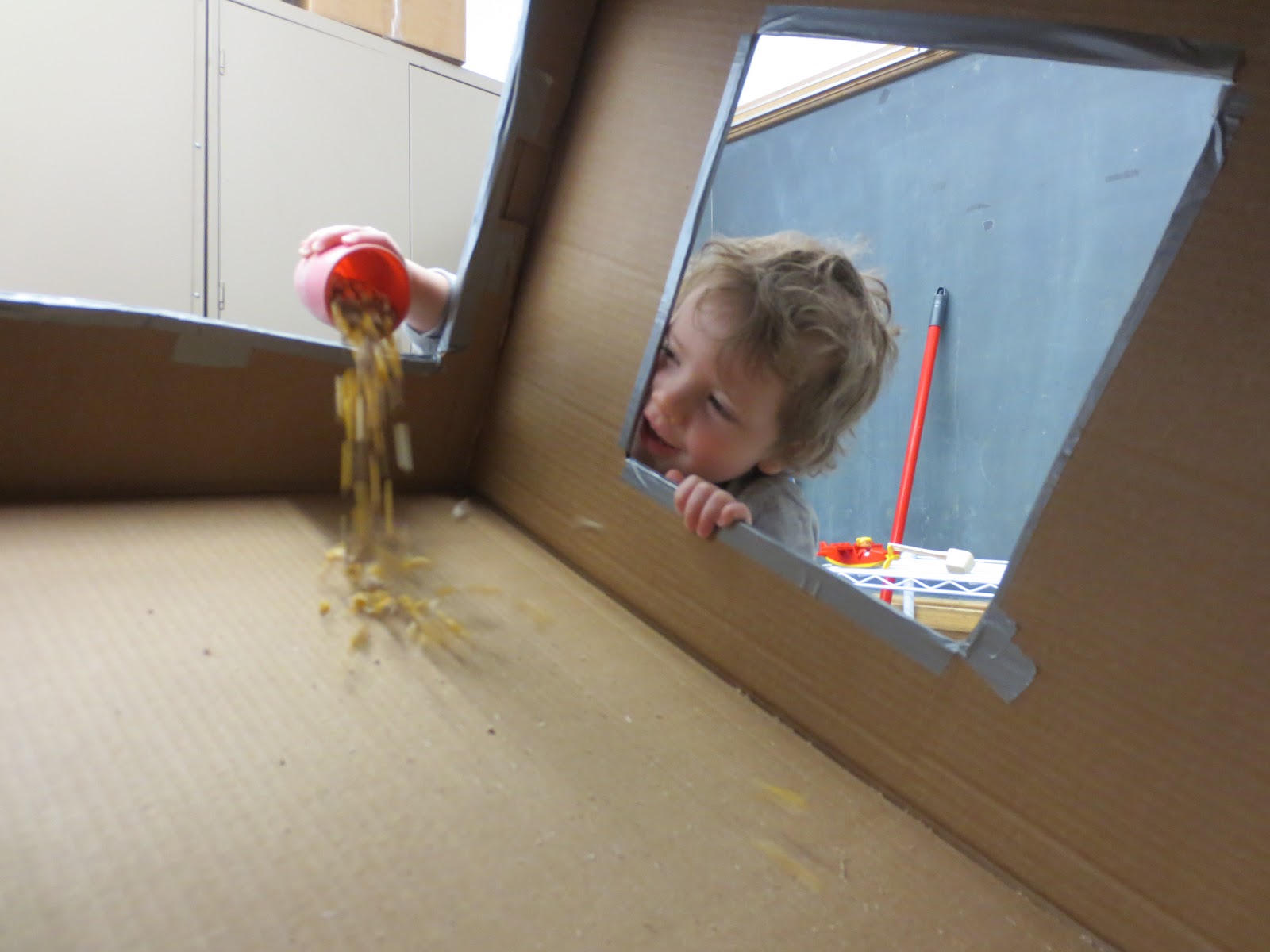 This last operation is really rich in terms of physical development.  Notice that he cannot see his arm as he pours.  What that means is that he is exercising his internal sensors---his proprioceptor receptors---to know where his arm is in space to complete the pouring.   We take this for granted, but children need the physical opportunity to develop such important skills.

What if you really want to get a bird's eye view of the corn tumbling down the box?  Well, you could stand on the lip of the table. 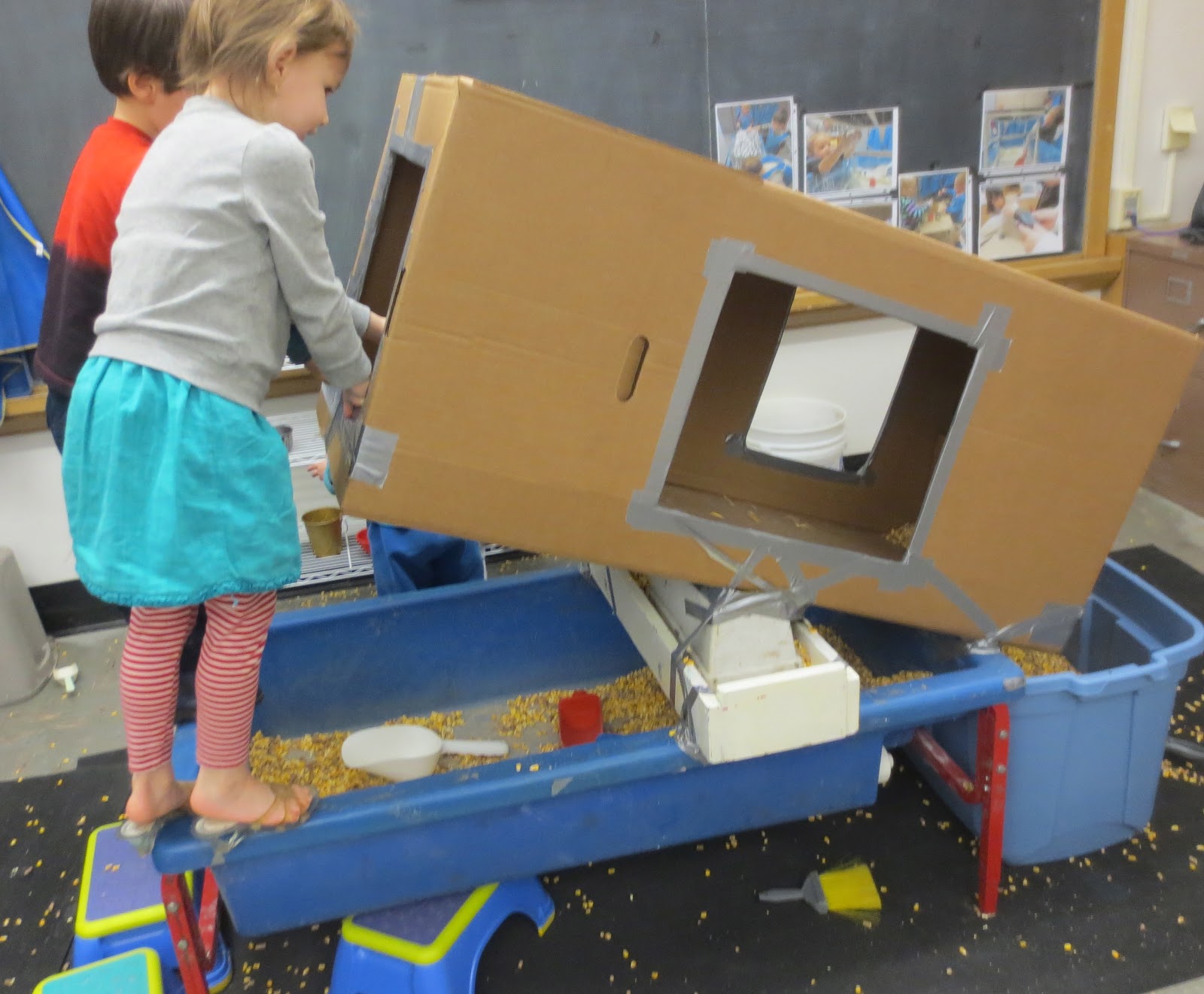 In this particular case, that is more of a challenge than you may think because the girl is wearing dress up heels from the housekeeping area.  I had a student teacher at the time and she asked me if that was OK for the girl to stand on the table with those heels?  I thought it was a very good question.

Though I did not originally set up the box incline with the physical challenges in mind, I now see them as really important.  This is a good case of the children showing me what they need.  And they need physical challenges and will find multiple was to partake of them.