Last week I wrote about Aksel's Tray.  It is a wide tray with three low sides and one open side.  It is set on a table at a slight incline so when the children pour and stir with water, any spillage drips into the adjacent water table and not onto the floor. 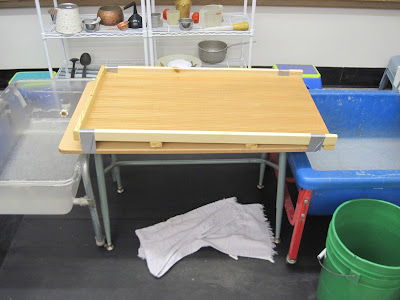 There were two design flaws.  One I imagined and the other I did not see coming.

The first design flaw was imagined and a non-starter.  I wanted tray to cover the whole table, but when I set it up with the open end over the blue water table, the other end did not cover the other side of the table.  When I saw that, I was worried that the children would use that little ledge and subsequently spill copious amounts of water that would go under the tray and onto the floor.  That did not happen.

The second design flaw I did not see coming and it was major because it did lead to a lot of water on the floor.  Watch the short video below to see what happened.  Pay attention to left side of the tray over the blue table to see where the water drips after it flows out the open end of the tray. You will see the water curl under the tray and drip onto the lip of the blue table.  Where does the water go then?

Watching the Water Flow from Thomas Bedard on Vimeo.

It is hard to see, but here is a closeup of the water curling under the tray.  (By the way, that is caused by the surface tension of the water.) 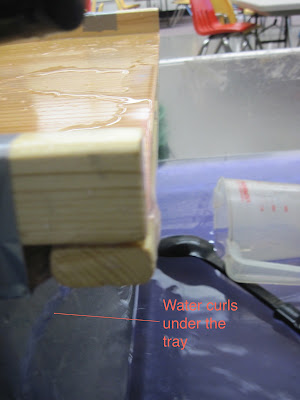 At first, I tried to put a pot under the tray, but the pot filled up quickly and was not steady.  I also put a large green bucket under the table, but since water has a mind of its own, more water went on the floor than in the bucket. 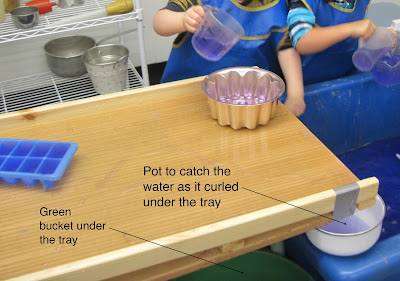 I tried turning the whole table around so the water coming off the tray would fall into the clear sensory table.  That did not work any better. 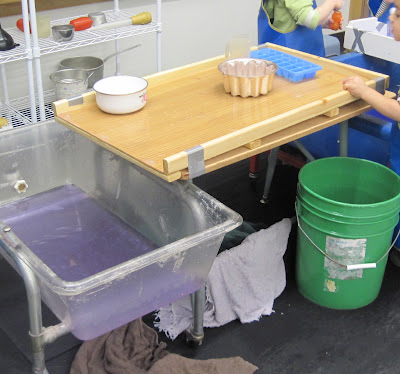 The solution was a splash guard.  I took the tray home after the first day and found a piece of black plastic that I attached with screws and caulk to the bottom of the tray. 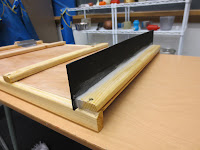 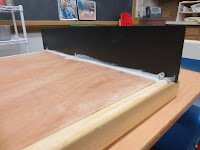 When I set up the tray with the splash guard, the water dripped into the water table as originally planned. 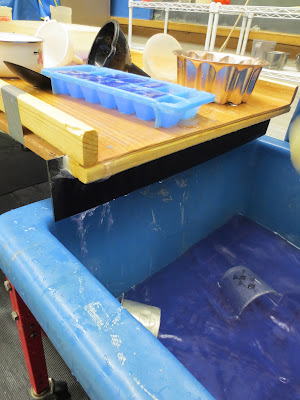 The result was a tray on which the children could operate without me, as teacher, micro-managing their operations to make sure there was no flood.  That is important because children are learning what it means to fill a container.  As a teacher I could tell them the container is full, but when they fill a container so it overflows, they begin to create that knowledge themselves. 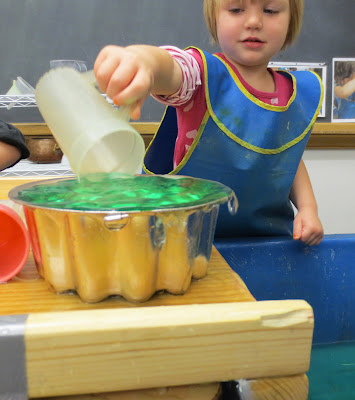 There is one final point to this post.   There will always be design flaws.  I will not let that stop me from building apparatus.  It certainly doesn't stop the children from exploring the apparatus and exposing the flaws.  In other words, as I build, the children teach me.
Posted by Tom Bedard at 12/01/2012