I have been in the field of early childhood long enough to know that washing baby dolls is nothing new in an early childhood classroom.  For the longest time, I resisted doing it in my classroom because I could not envision an apparatus to go with the activity.  Then it dawned on me: add a clothesline, a clothesline over the table. 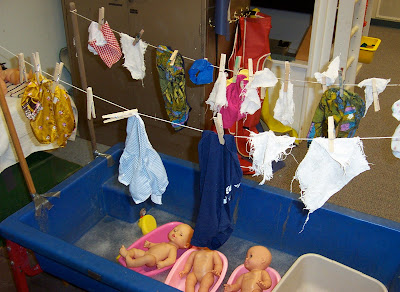 By adding a clothesline, the children could do more than wash babies; they could also wash clothes.  When they washed the clothes, they could use clothespins to work on the pincher grip needed for writing and other fine motor tasks.  When they pinned the wet clothes on the clothesline, the water from the wet clothes would drip back into the table.  In addition, it created another level of play above the table and I am all about levels.

This turned out to be a very simple apparatus.  I found four pieces of wood lying around in the basement.  I cut them with a hand saw for matching lengths.  I drilled a hole on one end of each and taped them to the sensory table.  I taped them in two places, one on a bottom bar and one on the lip of the table.  Taping in the two places made the poles more secure.  I then strung a clothesline between them and tied them off. 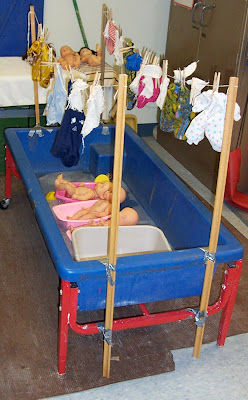 Besides the clothesline, I also set up a little table next to the sensory table as a place to dress and undress the babies and to dry the babies.  It also held some of the things the children could use for washing babies such as soap, towels, and washcloths. 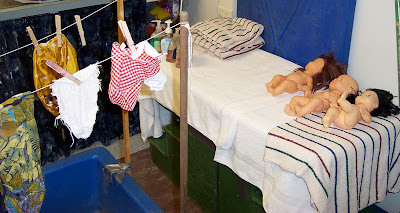 I was very pleased because it actually turned out to be an activity that attracted both boys and girls. 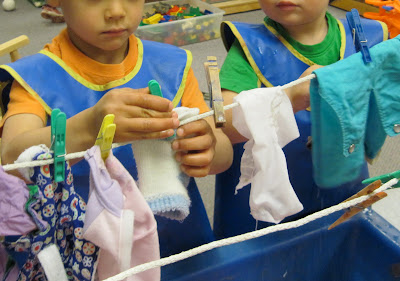 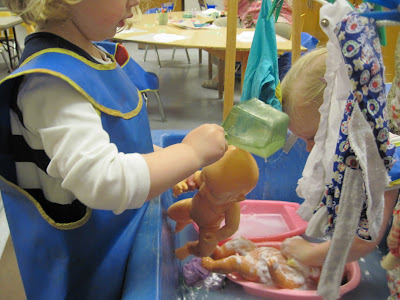 As you see in the previous photos, the children wash the babies. Sponges and washcloths are provided for washing and little containers for rinsing.   Larger towels are there for drying.

This little guy has the drying part down.

Besides the washing and drying of babies, there is a lot of washing of clothes.

Figuring out how the clothespin works is a little harder.  This boy wants to hang up a shirt, but cannot figure out how to open the clothespin to get it off the line.  He stops trying, drops the shirt in the water, and begins playing in the soapy water.

But he didn't really give up.  He tries again to make the clothespin work.  Watch closely to see how he does it.

Did you see he used his mouth to make the clothespin work?  He continued to mouth the clothespin and even bit down on it and got his figure caught for a brief second.  He mouthed a silent "Ow!"  But did you also see that at the end, he was able to take a clothespin off with his hand?  That is a nice little bit of progress in a very short time.

Lately when I have been reviewing pictures and videos for posts, I have noticed that some of the activities that the children create are tangental to the apparatus itself.  They have more to do with the materials provided than the apparatus.  The video below is a case in point.

The sponges were provided to wash the babies.  This child concocted this activity to line up the three sponges in a neat row with the sides touching.  That lining up of the square sponges has to be a basic geometric operation.  He then stacks them together with a folding motion.  It wasn't just laying them one atop the other, but he almost shuffles them like a three-card deck of cards. There is a certain novelty and beauty about how he does it.  So why did he line them up and stack them?  It was done in the vein of discovering the properties of the materials.   The child is thinking and acting with his motor actions.  Once he has figured  out what he thinks is interesting about the materials, he wants to show someone.  He asks me to watch and shows me how he can shuffle and then squeeze them all out at once and how much water comes out.

That sounds like a seventh axiom to go in the panel on the right.  Children will always devise new and novel activities with the materials presented that are tangental to the apparatus itself.

I will be taking a couple of weeks off from blogging.  School is starting up again and we are in a new space so there will be some long hours trying to organize the space.  I will post again mid-September.