What complicates any answer to the question of meaningful choices is the following quote.  Early on in the book, Hawkins wrote:

"The product number, of possible congenital patterns multiplied by possible early
biographies of children, is of higher arithmetical order than the total number of
children past, present, or future.  The probability is effectively zero that there
would be two children presenting the same educational challenges and opportunities." (p. 25).

My answer is a simple answer: every child has to be able to find their place in the classroom.  That would be a place in which they feel valued for who they are and the choices they make about how to engage with the environment. 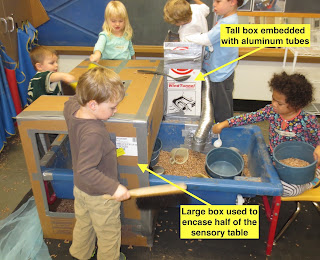 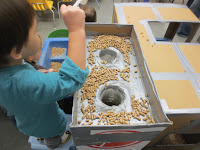 I chose to add a second box that was tall.  I inserted two tubes in the box that went from the top the box, down into the box and then out of the box. One tube emptied into the table and the other emptied down into the bottom of the big box.


The first meaningful choice children made was to not engage with the apparatus at all.  Because children were not required to move to stations around the room, some children chose to work in other areas of the room that included the writing table, the large muscle area, the building area, the housekeeping area, the manipulative area and the book area.   Even though I myself had chosen to put a lot of effort into building the apparatus, I still had to honor a child's choice not to engage with it and to engage with something more meaningful to them on that day.

One child chose to arrange the loose pails, pots and bowls on top of the apparatus so he could use the plastic serving spoon to deliberately test the different sound each object made.


Percussion play on top of the box from Thomas Bedard on Vimeo.

He gathered the pails, pots and bowls and arranged them almost like a drum set on top of the big box.  No other child did this with this apparatus.  In essence, he played with an idea of his own making/choosing that resulted in new meaning for him.

It was not unusual to see a child actually go into the box itself.  That was likely since I purposefully chose to leave some room as an invitation for a child to crawl in.  The child in the video below crawled in and situated herself as she gleefully exclaimed: "I fit in even though I am taller than this whole thing!"


I fit in the box from Thomas Bedard on Vimeo.

In essence, the child has chosen to use her body and her emotions to make meaning of this complicated apparatus.

If one child fit inside the box, why not two?  However, when two children chose to be in such a small space their choice took on a much different meaning.  It was not just figuring out a complicated structure, but it was also about how to negotiate movement in a very tight space. 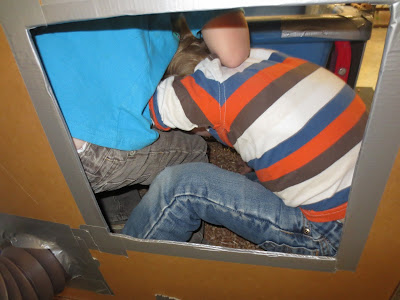 These two children chose to be in the box together.  They also chose to constantly move, even go so far as to as to switch places a couple of times.   In essence, they were socially constructing what it means to accommodate another child in a very confined space.

Many children decided to engage with the second box with the tubes.   Because the tubes were inserted into the box, the children could not see the path of the pellets that were poured into the holes at the top.  Instead, they had to experiment to see where the pellets exited when pour into one of the holes at the top.   The child below did just such an experiment.  He chose one of the holes into which he poured the pellets.  He had an idea where the pellets would come out and looked to see if his hypothesis was right.


Hypothesis from Thomas Bedard on Vimeo.

In essence, the child chose to experiment with the apparatus, not only to make sense of it, but also to understand the properties of the material he was working with and the forces acting upon that very material.

Children often decided to act together.  Below, five children poured pellets down two holes.  They may not have been as interested about where the pellets went as they were in the frenzy to pour as fast and as many pellets as they could as a group. 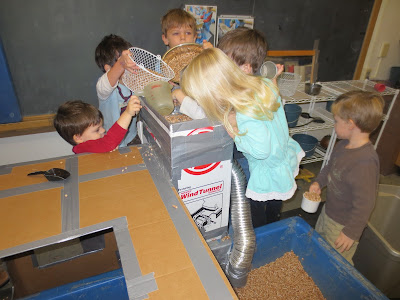 In essence, they were socially constructing what it meant to work as a group in self-chosen task.

I began with the question: What constitutes meaningful choices for children?  In almost every example I gave, I actually reversed the order to show that children were making choices and that they were meaningful to them.  That was true if they worked alone or with others.

For me this raises several questions.  If children are truly given the freedom to make choices, are all their choices meaningful?  Can a child even make a choice that is not meaningful in some way? Who gets to decide what is a meaningful choice?  Are some choices more meaningful than others?