For 28 years, I built apparatus that fit in and around the sand and water table .  Children arrived in my classroom already with a set of competencies that could be expressed while playing with those structures.  I always wondered how those structures would shape children's play and exploration given their competencies.

As I have done over the past couple of posts, let me infuse my musings with a context.  The context I wish to use is an apparatus I built in 2012.  The apparatus was a long narrow box set on an incline.  Children poured wooden fuel pellets down the box through various holes I cut in the box.  The pellets exited the bottom of the box through a slit that directed them down and into the blue tub next to the sensory table.  Here is the original post: big box incline with added element. 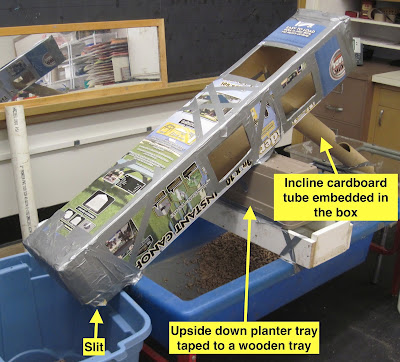 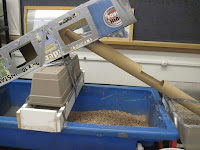 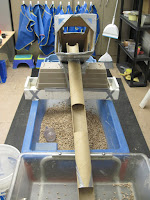 The reason I cut multiple holes in the box was to give children multiple points of entry for their operations.  In addition, I partially embedded a cardboard tube in the top area of the box on an opposing incline.  Pellets poured down the tube exited into a small sensory table at the end of the cardboard tube.


Let me start with a couple of competencies that the children brought to the apparatus; scooping and pouring.  Those may sound simple but I wonder if they really are.  I do not know enough about motor development, balance and proprioception to understand how complex those operations really are.  However, given those competencies, how did the incline apparatus shape the children's play and exploration.


Aiming for the tube from Thomas Bedard on Vimeo.

In a way, I think the apparatus gave a novel purpose to their scooping and pouring.  For the child on the left, it was to see how many pellets could he get to disappear down the cardboard tube.  Was he working on his aim or was he fascinated with how the pellets tumbled and disappeared down the tube?  For the child on the right, it was to see where the pellets he poured actually went.  Did he notice the disconnect between how many pellets he poured and how many dropped out of the box at the bottom?

Two children brought little cars from the block area to use with this apparatus.   One child made ambulance sounds as he positioned his little ambulance in the opening on the top end of the box.  Before letting it go, he moved his head to the hole on the side of the box so he could get a closer look at what happened to the ambulance when he let it go.  He let it go and watched it drop into the cardboard tube.  He knew immediately that it changed directions and went down the tube.  He even told a child at the end of the tube that he caught an ambulance, his ambulance.  A second child in red repeated this experiment but watched his actions through the opening in the top end of the box.  This child knew that his race car changed directions when it entered the tube because he, too, immediately looked to the bottom of the cardboard tube to see where it went.


You caught an ambulance from Thomas Bedard on Vimeo.

In this case, the apparatus offered the children a challenge: What happened to their cars when they fell into the tube?  That challenge fed their curiosity to figure out the trajectory of the cars they put in motion down the box.

Yet another competency the children brought to the apparatus was the ability to give the apparatus a novel purpose.  In the video below, the same two children who brought the cars to the sensory table were asked to collect the cars at cleanup time.  To collect the cars into the car container, they decided to place the car container at the bottom of the cardboard tube.  In that way, they were able to send all the cars down the tube right into the container.


Fun way to cleanup the cars from Thomas Bedard on Vimeo.