In my most recent post, the ledge-part 2,  I had a picture of a child jumping from a ledge onto a mini trampoline. 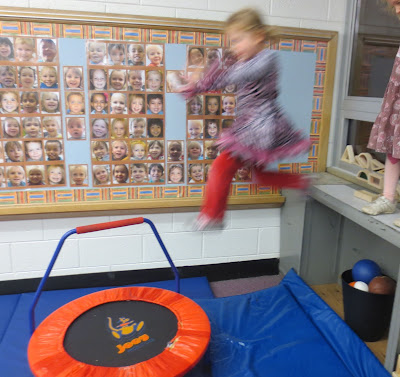 One person commented that she hated those mini trampolines.  That got me thinking that I could probably do an entire post about how many different ways the children use them to create their own physical challenges.

It helps to know that I had a large muscle area in my classroom that was always open during free play.  One piece of equipment that was rotated into this area several times a year was a mini trampoline.  And most times, there were two trampolines out at the same time.

Adults pretty much see the mini tramps as something that the children use for bouncing. 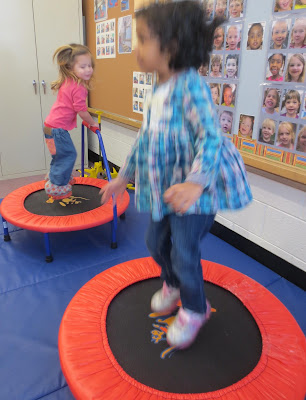 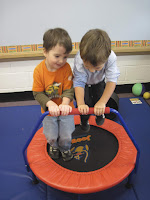 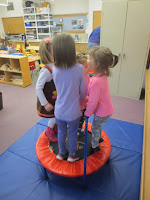 In addition, adults usually view these small trampolines as a large muscle apparatus to be used by one child at a time.  They often see it in terms of children lining up to take turns.  Children can have very different ideas than adults.  Two and even four children can fit on the mini trampoline at one time.
That is just the beginning of how children see the mini trampolines.  For them it is a challenge: How high can I jump? 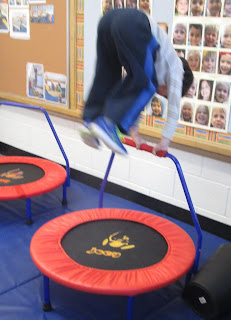 Pretty high.  The bar on the trampoline makes it possible for the child to jump so his feet are higher than the bar. 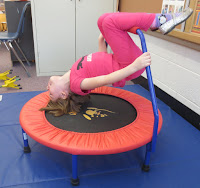 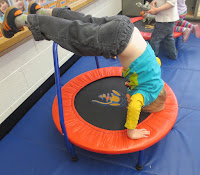 Children know intuitively that a handle is not just for holding onto.  It is also useful for giving the vestibular system a good work out. 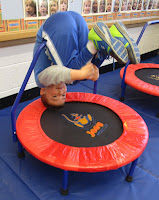 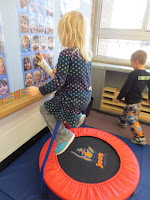 Children also intuit that the handle can also be useful for working on balance, whether that is upside down or right side up.


The children know that sometimes two trampolines are better than one.  In the video below, the children are "trampoline running."  Notice how they determine their own order and their own pace in this activity.  Their flow gets temporarily interrupted when the child in the yellow shirt bumps his knee or shin and takes himself out of line because it hurts.

The interruption is no more that four seconds before the trampoline running continues unabated.  And then three seconds after that, the child in the yellow shirt rejoins the fun.

Because the children can move the mini trampolines, they can calibrate their own risk.  The child in the video below has moved the two trampolines close enough together so she can confidently jump from one trampoline to the other.

In the previous post, some people took issue with allowing children to play on the ledge.  They did not necessarily disagree that children need physical challenges and some of those challenges include climbing.  A solution that was suggested was that I could purchase equipment that was specifically made for climbing.

I don't necessarily take issue with that point of view, but I do think it is rather limiting.  Children---and adults, for that matter---are always finding uses for things for which they were not intended.  In fact, that might be one definition of creativity.   Case in point: the trampolines.  They are made to jump on.  Indeed, children jump on them.  But for the children, that is just the beginning of what is possible on the trampolines.