I have always been curious about the operations children employ as they explore and experiment with a new apparatus at the sensory table.   Below is an apparatus I built over seven years ago.  I called it Boxes in boxes - bridge. 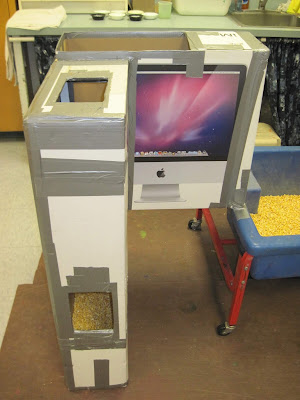 This construction was unique because it was not built inside the table, but next to the table.  It consisted of a iMac box embedded in a furniture box.  The iMac box formed the "bridge" between the table and the furniture box.  Children poured corn into the holes that collected on the bottom of both boxes.  They also used the holes to reach in to collect the corn.  In other words, the holes also offered multiple entry points for their operations. 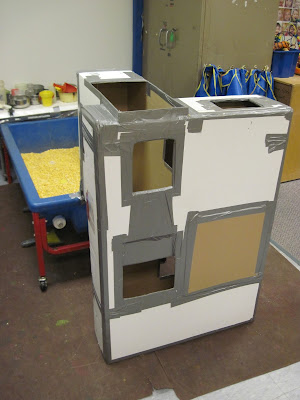 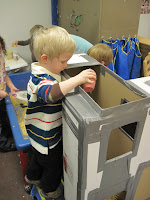 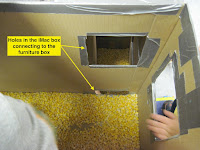 
Collecting the corn with his hand from Thomas Bedard on Vimeo.

Why did he collect his corn that way?  It would have been easier to scoop it directly from the sensory table.  That is especially true when he had to contort his body to reach as far into the box as possible.  Though the operation looked as if he was simply filling a container, there was a lot more going on than just scraping corn into a measuring cup.  For instance, there was also some good trunk flexion and trunk extension as he bent over to reach the corn.  Is that why he did it that way?

Another child filled a black bowl and then poured the corn into one of the top holes of the apparatus.  He collected corn from the table in his bowl.  He filled it as full as he could.  Since he did not want to spill, his whole operation was done slowly and carefully.  Even when he poured the corn from his bowl into the box, he made an effort to create a measured flow instead of just dumping it in the hole.


Pouring the corn from Thomas Bedard on Vimeo.

Though this was essentially a simple filling and pouring operation, again, there was a lot more going on.  For instance, to complete his task, he had to use a good deal of balance and eye-to-hand coordination.  I would go so far as to say that there was a zen-like quality to his operation, especially as he focused on the corn from his bowl hitting the bottom of the box.   Why did his filling and pouring take such a form?

Compare that pouring operation to the child who filled a big bucket and poured it rapidly down one of the holes on top of the apparatus. 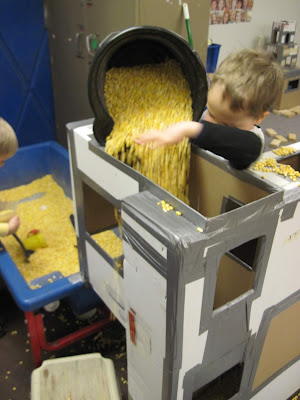 Again, this is a simple pouring operation, but for this child, the operation involved a little more muscle strength and control.  He also had to exhibit more perseverance to fill the bigger container.  Why did he dump when the other poured methodically?

As adults, we sometimes think we know what children are experiencing.  Our experiences have imprinted our thought processes in such a way as to control what factors we see as salient when interpreting children's actions.  At first glance, we only see children filling containers and pouring them out.  We do not see the complexity and nuances of their operations.  Their actions are much richer, maybe even richer than we can know.  Why bend over to reach into a box to fill your container with corn?  Why fill your bowl as full as possible to empty it carefully into a hole at the top of the apparatus?  Why expend so much energy filling a big bucket just to dump it into a hole?

Without a deep curiosity about what children do and why they do it, we never see past the simple operations of filling and pouring.  Without that deep curiosity, we often forget to ask questions that help us understand where these operations originate and why they take different forms.  I am not saying that we can know, but without an effort to take the children's perspective, we are limited in understanding what the children are truly experiencing. 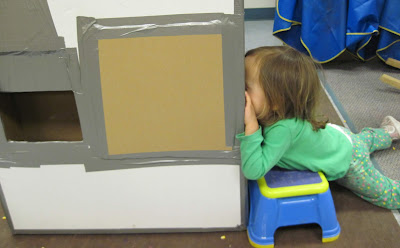