For the past five years, I have been reading books in the Contesting Early Childhood Series from Routledge Press that are edited by Gunilla Dahlberg and Peter Moss.  The series questions common assumptions in the field of early childhood education and "...examines the possibilities of risk arising from the accelerated development of early childhood services and policies, and illustrates how it has become increasingly steeped in regulation and control."

The first book I read in the series was called Beyond Quality in Early Childhood Education and Care: Languages of Evaluation.  The book basically questioned the concept of quality and how is it measured in early childhood education.   Before I started reading the book, I thought I knew what quality was.  After all, I had honed my craft for over thirty years. The book asked me to be critical about who gets to decide what quality is and for whom.  Since quality is a political, social, cultural and ethical construct, the concept of quality can be examined from multiple angles.

Two weeks ago I was in Austin, Texas, for the Professional Learning Institute of NAEYC.  Many of the conference attendees were trainers, administrators and researchers.  In other words, many of the leaders in the field who shape the discourse around such things as quality.

Sonia Nieto, professor emeritus from the University of Massachusetts, Amherst, gave the opening plenary session.  Much of her work has been in the area of emergent bilingual education.  In her own way, she troubled the dominant discourse around bilingual education.  She asked the attendees to see and appreciate children's strengths and potentials rather than their perceived risks and deficits.  She even questioned one of the prominent constructs in education, namely, best practices.  She never uses the term because from her point of view there are no best practices for all children.  Each practice is contextual and needs to adapt to the cultural, political and ethical exigencies.

For the sessions I attended, I did my own troubling of the dominant discourse.  Many of the sessions privileged language and literacy.  Usually there was an added emphasis on social and emotional learning.   What was missing for me was some mention of the children's need to move to shape their own learning.  If movement was talked about, it was usually directed by adults and always in the service of learning academics.  Where was the language of children's actual play and exploration?  Where was the language of children's own movement and their dialogue with materials?

Below is a Duplo ramp.  Basically it was two Duplo panels attached to a wooden frame and set on an incline.  Children used Duplo blocks to build various configurations to alter the flow of water down the ramp. 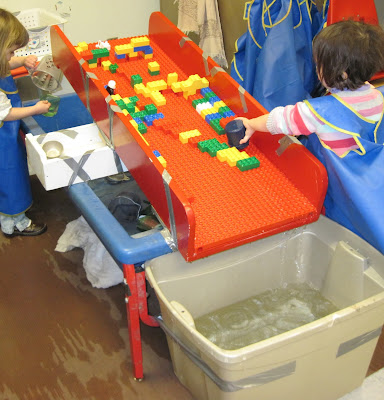 This apparatus offered a couple of good examples of children's thinking in motion as they play and explore pouring water down the Duplo ramp.

In the first example, the child poured water from a pot down the ramp.  When the pot was empty, he dropped it back into the table and ran around to see the water come down the ramp.  He got to the end of the ramp before the water.  As he watched the water drop into the tub in rivulets, he said the water was "leaking."

Pouring Water Down The Lego Ramp from Thomas Bedard on Vimeo.

In the first example, there was a lot of action before there were words, a precious few words.  In the second example, there were no words at all.  Often times, teachers ask children to talk about what they are doing; they ask the children to put words to their actions.   The request for children to verbalize what they are doing often times sounds like an interrogation.  It is almost as if their actions must be validated with words.

I am not saying verbal language is not important.  I am saying that it is not always the language that should be privileged.  I am trying to make a case for adults to listen to a very specific language of children that is primary for young children.  I am advocating for listening to the language of their actions.   That can only happen when we set up the conditions for uninterrupted play and exploration.  That can only happen if we cultivate a disposition to privilege their actions as thinking.
Posted by Tom Bedard at 6/23/2018