This is a re-write of a post from February 2011.  A lot has happened since then, but the post concisely summarizes my basic view of children that has developed over time---and deserves a little update.

I would like to explain the picture I chose for my profile. The picture does not speak directly to sand and water tables, but rather to my view of children. That in turn, influences my practice which includes building apparatus for the sensory table. 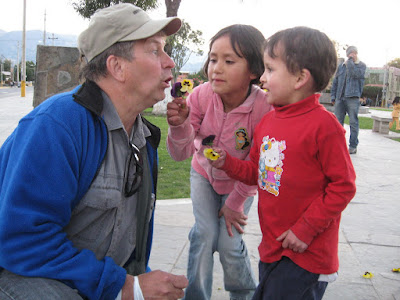 This picture was taken in 2008 in a park in Los Banos, Peru.  Los Banos is famous in Peru for its thermal baths that were used by the Incas.   The baths are a short ride by combi from the city of Cajamarca in the Northern Highlands of Peru.  My daughter was living and working in Cajamarca at the time, so I went to visit her.  My daughter worked for a non-profit organization that gave mircroloans to women.  On this particular day I accompanied her to one of her meetings with the women with whom she worked.  As she was talking with one of the women in the park after the meeting, I noticed the woman's two children playing.  Before long, they were bringing me flowers.

So why the picture?   It has to do with connecting with and respecting children for who they are.

It began when the children noticed that I was watching them.  Children are always looking to make connections and form relationships.  They reciprocated immediately.  It was then my turn to reciprocate.  By the way, often times it works in reverse: a child initiates and I reciprocate.

There are two things to notice about the picture.  First, I was down on their level.  There is really no other way to understand the children's perspective of the world.  A colleague once related a story of a little girl who kept telling the teacher to look at the bunny in the snow.  The teacher could not see it no matter how hard she tried.  The child was insistent and finally the teacher bent down to see what the child was pointing at.  It was only then she saw what the child saw: the snow had drifted into the shape of a rabbit.  The teacher was so intent on seeing a real rabbit hiding in the bushes that she could not even imagine anything else until she looked from the child's physical perspective.  The world from a child's perspective is full of surprise and wonders.  How often do we miss those surprises and wonders because we do not take time to get down on their level?   How often do we fail to show respect for the children by not validating their perspective?

The second thing to notice is that we were focused on each other.  Our actions were our shared language even without words. That was doubly true in this instance because I did not speak Spanish and they did not speak English.  All our communication was non verbal.  There was no script to our interactions, so we made it up as we went along.   We were living in the moment: both sides initiating and responding; both sides reading each other's cues.

When I build an apparatus for the sensory table, I use it as a provocation to prompt a dialogue.  For the most part, I am interested in the dialogue between the children and the materials.  Ideally, the apparatus is inviting and rich in possibilities.  There is no script to follow.  Rather, the children bring their own set of abilities, interests and ideas to the table---literally.  My job is to notice.  In noticing and recognizing the context of their interactions, I, myself enter the dialogue.  For the most part, I am not playing with them or the apparatus; I do not try to guide or direct their explorations.  Rather, I am there to bear witness to their ideas in action; I am there to understand their perspective and all the surprises and wonders that ensue; I am there to show how much I respect their thinking.   Though I am always trying to put words to what children are doing, I can't stress enough how much the reciprocal dialogues depend more on actions than on words.

One last point about what the picture says to me.  The act of giving flowers is an excellent metaphor for the beauty all children have to offer if we are primed to notice their cues, prepared to receive them, and ready to reciprocate in kind.  And, if we are able to take their perspective, we are more likely to appreciate and value that beauty.
Posted by Tom Bedard at 3/17/2018