Flex tube in a bucket

Here is an oldie but goodie.  I built the flex tube in a bucket over 20 years ago by taping an aluminum tube into a five-gallon bucket. 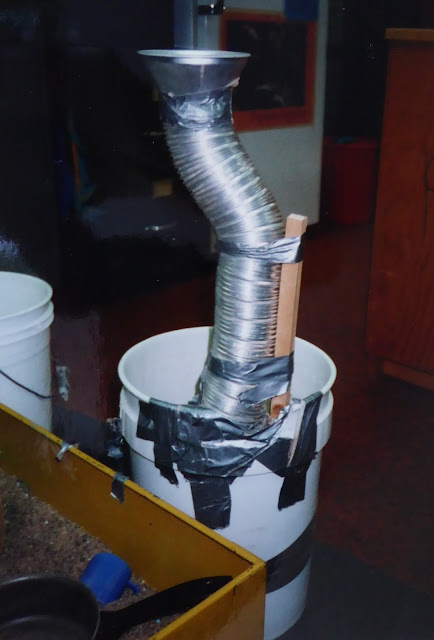 The aluminum tube was left over from the tubing I used to vent a new water heater I installed back then.  I originally thought I would incorporate it in a box structure but I eyed the bucket first and viola!  I propped the tube in the bucket by wedging it between the handle and the bucket.  Then I taped the whole thing together with lots of duct tape. 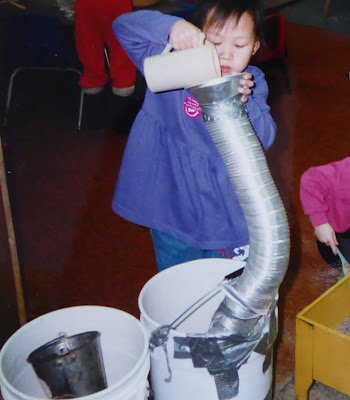 To make it more inviting to pour into, I added a funnel at the top.  Also, by taping the funnel to the top, I was able to cover any sharp edges at the top of the aluminum tube.

In one way, it worked just as planned: the children could pour the sand in the funnel and they could manipulate the tube by bending it.  However, before too long I realized the design flaw: when the tube was bent , the sand would get stuck in the bend which made the apparatus unstable.  Subsequently, I taped a stick to the aluminum tube to restrict how much the children could bend the tube. 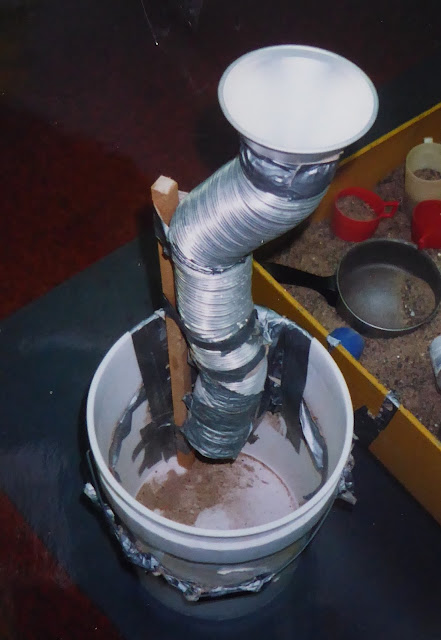 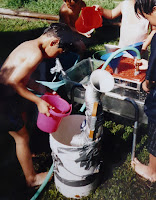 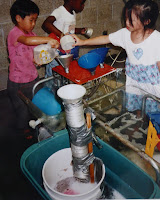 Since it was a stand-alone piece, I would use in combination with other apparatus.  I could easily set it up with water apparatus either outdoors or indoors. 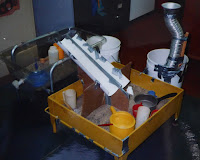 The flex tube in a bucket worked just as well with sand.


People have often asked me for ideas for sand and water play without a sand and water table.  This could pass for one of those ideas.  Add a few more buckets or tubs and the children will transport to their hearts content.

What that tells me is that I used my documentation early on simply as a means of recording what I built with snippets of children playing at the apparatus.  I did not use the documentation to think about what I built and how children used it.  I am glad the images are still around for me to reflect on now, but some of the riches of how children thought with the apparatus are gone.

Just an end note:  I will be one of the presenters for the Fairy Dust 2017 Virtual Summer Conference.  The conference begins in a few days on July 10th.  With the virtual conference, you will be able to access the conference any time you want and as many times as you want.  You can check out the lineup and the topics here.