Last week, I presented at the HighScope International Conference in Detroit.  I am not HighScope trained, but I do know my work has been cited in their curriculum newsletter as a way to get teachers to think differently about the possibility for play and learning at the sensory table using constructions to foster children's thinking.

The reason this video was in the presentation in the first place was because I wanted to make an important point.  Vertical is one of the orientations in the right-hand column of this blog and is always one of the dimensions I think about when I build an apparatus.  Why?  Because children feel the need to go vertical in their operations.  I have learned through the years that children will always go as high as I build.  That means I build only as high as I am willing to let children go.  By extension, anyone building on the vertical should build only as high as they are willing to let the children go.

From the clip, you can guess my comfort level for children going vertical.  However, for me to get to that comfort level, a couple of things had to happen.  First, I had to make sure the construction was sturdy and stable.   That was not so easy with this vertical structure because I knew children would exert significant force in multiple directions on the top of the structure.  That required that I make sure the bottom was really secure. 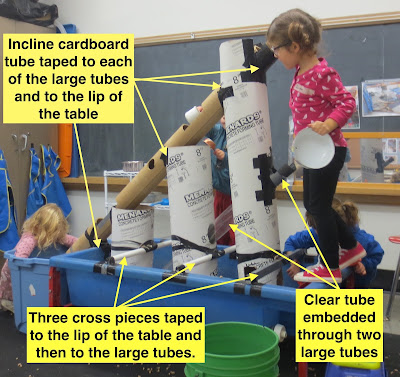 I am not an architect or an engineer so I cannot tell you how all the elements make this apparatus sturdy and secure but it passed my stability test knowing that children would climb, push and pull on it.

The second thing that needed to happen was that I had to assess in real time the children's coordination, strength and balance as they went vertical on this apparatus.  The child on the left in the red shirt was comfortable from the beginning climbing up and down.  However, the child on the right was tentative from the beginning.  To begin with, even before I started video taping, I positioned myself next to her to see if she could climb both up and down without assistance.  When I was convinced she had the physical acumen to climb on her own, I could then step back and observe.  That did not mean I let my guard down because I knew this child was challenging herself at the edge of her comfort zone.

Below is a video clip of this same child on her way to mastery.  I had already been supervising her to make sure she was comfortable enough going both up and down.  She started out by telling me she could reach "way up there" if she stood on the lip of the table.  She climbed all the way up and poured her pellets down the long cardboard tube.  She then climbed down.


Verticle up and down from Thomas Bedard on Vimeo.

I could tell she was still working hard with balance and coordination to go up and especially to come down.  However, I also saw that as she climbed, she was in contact with the table and apparatus at three points almost all the time.  So for instance, when she stepped back down onto the stool, one hand held the cardboard tube, one hand was anchored on the lip of the table along with one foot. 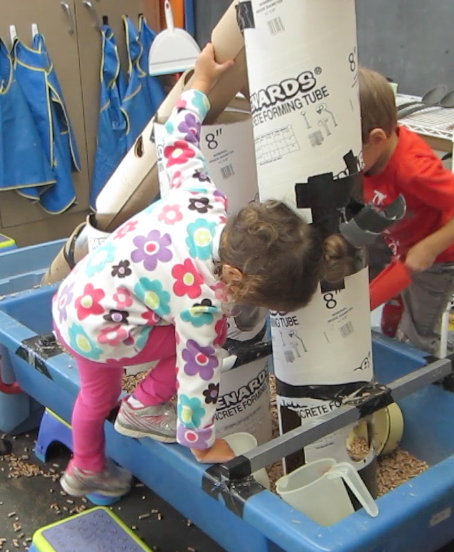 She had already figured out that three points of contact gave her the needed support to climb up and down.

I really appreciated being challenged by the participant at the conference.  From looking at the eyes in the crowd as I showed the video, I am sure others felt the same way.  For that reason, I thought it was important to hold that as a legitimate concern for the group.  It was a moment that offered an opportunity to examine our feelings, beliefs and values.  We are, after all, teachers in a classroom of young children making decisions all the time based on our feelings, beliefs and values.  If we do not examine them, we are not living up to our potential as teachers.  The last thing I want in a presentation is for someone to take what I have to say hook, line and sinker.  It is not meant to be prescriptive.  It is meant to be about possibilities.  But the possibilities begin with our own values.

To be perfectly clear, I am not advocating that teachers allow children to climb on the sensory table, especially if they are not comfortable with children climbing on the sensory table.  I rarely worked alone in my classroom.  At times, another teacher or aide had to supervise the sensory table.  I would always tell them that they had to make decisions based on their comfort level.  And, indeed, some of them would not let the children climb on the lip of the table.  I had no problem with that as long as they owned their decision.  Interestingly, the longer they worked with me and saw children challenging themselves physically without getting hurt, the more they would allow.

I never felt like our job was to inhibit what children could do in a space.  Instead, we were to create a supportive physical and psychological space in which the children could test their abilities.  Only through testing themselves, would they start to know what they are capable of doing.  In the process, children would gain the confidence to inhabit the edge of their comfort zone, the place where so much learning potential resides.