I started introducing sticks into the classroom at the sensory table at least 25 years ago.  At first, the sticks were small. 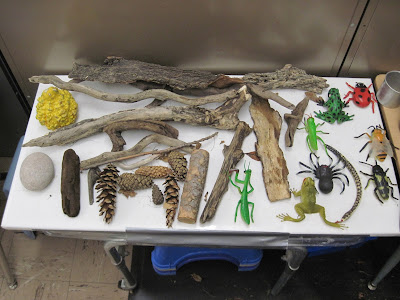 Many of the sticks I used in the classroom I had collected on my walks down by the Mississippi River with my own children.

In the classroom, the children had no trouble figuring out what to do with the sticks.  For instance, in the sand, they would "plant" them to make miniature landscapes. 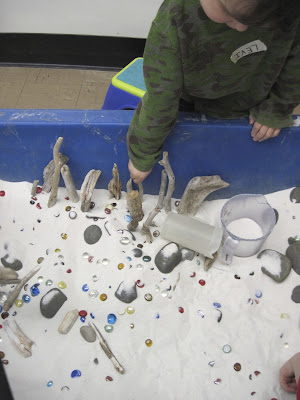 Or make sculptures by piling and balancing them on top of one another.  This child told me this was his house and wanted to make sure I saw it. 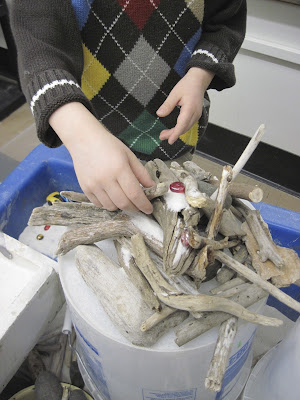 One child even took a stick, stuck it in the sand and added a tree knot over the end to make his own microphone. 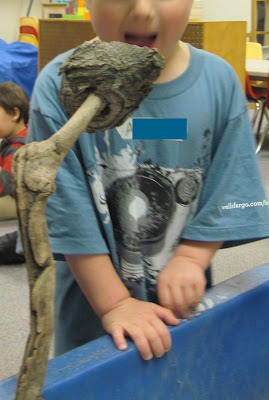 Gradually I started to introduce larger sticks.  Actually, it might be more accurate to call them branches. 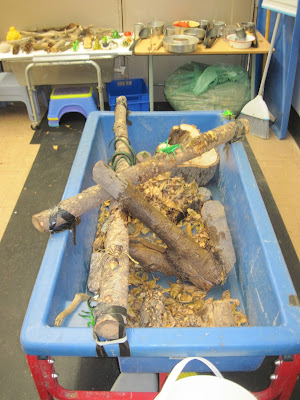 Since I was not sure how the children would handle these bigger branches, I taped them down to the table so they could not be moved.  In the picture above, the two longer branches were taped to the lip of the table with black duct tape.  There was a smaller branch with three arms that I did not tape down.  It was an experiment to see how the children would handle a bigger, loose piece.

I went so far as to bring a log into the classroom.  This, too, I decided to tape down; I did not want it dropping on someone's foot. 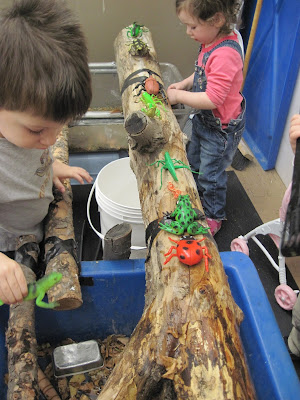 About the same time I set up the log in the sensory table, I was walking down by the river and found some long narrow sticks.  What caught my eye was that some animal---a muskrat?---had chewed them down and ate much of the bark.  I gathered a bunch of the sticks and set them in a bin next to the sensory table. 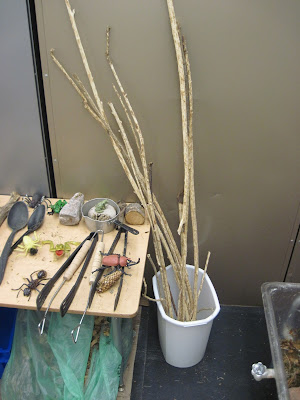 In a way, this was a leap of faith on my part.  I was introducing long narrow sticks knowing that they would increase the children's personal space beyond what they were used to in the classroom.  These sticks were as tall, if not taller, than they were and when they handled them, what would happen?  Would they swing them around and hit someone?  Would they poke themselves?  Would they use them as swords?  What kind of mayhem would ensue?

So what happened?  There was no swinging or poking or even sword fighting.  Instead, the children found ways to manipulate the sticks and build with them.  Below is an example of one such episode.  One child is using the sticks to build bridges across the sensory table.

The child was being quite mindful of how he was handling the sticks.  He was even aware of the child on the other side of the table and asked him to move so he could put down more bridges.

I eventually cut up all those sticks into smaller pieces and ended up with a basket full of sticks measuring 3 to 6 inches.   When people saw these little sticks, they were impressed and thought I had worked very hard to make the marks with a knife.  No, those were marks made by an animal feeding on the bark. 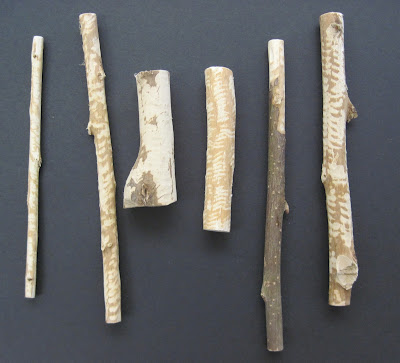 These sticks became a permanent fixture in my classroom.  They continued to be used in the sensory table with various apparatus.  However, their permanent residence was in the housekeeping area.  This was the time I got rid of the plastic food and started using more open-ended and natural materials in that area of the classroom. 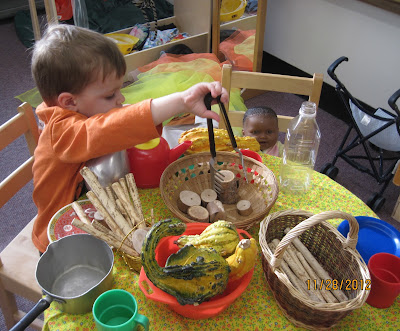 Believe it or not, I am not done with the classroom experiments with sticks, but it will have to wait until next week.    Will the dreaded mayhem finally ensue?
Posted by Tom Bedard at 3/04/2017