Evolution of the wooden tray

One of the very first apparatus I built was a wooden bridge that spanned the width between two toddler water tables.  I built it in 1988 when I started work with a public school district in an family education program.  I simply nailed and glued sides to a board using scrap wood I found in my basement.  To keep the water from leaking, I used plasticine (the pink line on the board) to seal the joints. 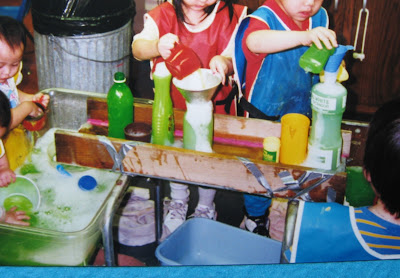 The bridge offered a surface almost like a counter above the water tables on which the children could work.  In the picture above, the children are filling their bottles through funnels.  If they tried to do that with the bottles in the water, the bottles would want to float making that operation extremely frustrating if not impossible.

I later added a piece of wood to close off one end of the wooden bridge.  In the picture below the children have piled the end that is closed with sand and rocks. 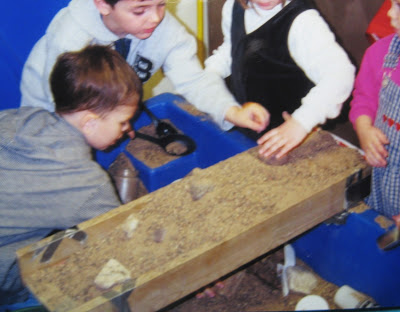 The end on the lower left of the picture is open.  Since it extends beyond the table, there is a pail
underneath that ends up catching any sand that might fall from the apparatus. 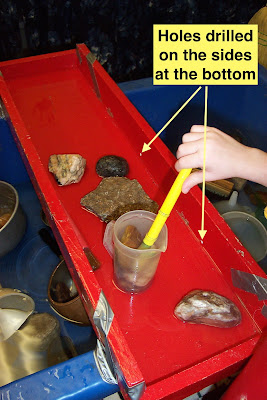 Since I was going to use it with water, I needed to drill drainage holes in the sides on the bottom.  I decided on two holes on each side that were not too big because I thought a slow drain might offer children a chance to play with water in the tray.

Below is a good example of just that.  I had installed the wooden tray with a setup I call the swamp. As the video starts, one child tells me they are making a "sink-float."  When I ask them how they do that, the child says they put swamp water in the tray.  I see the piece of wood is already floating so I ask if it is floating yet.  Interestingly, he says not yet and then proceeds to float the wood---with motorboat sound effects---back and forth.

A sink-float from Thomas Bedard on Vimeo.

I am pretty sure he understood what float means.  I just think he was telling me they were not done with their sink-float project.

You may have noticed that the wooden tray in the video is white as opposed to red.  The first wooden tray lasted 21 years.  In 2009, I decided it was time to build a new wooden tray.  One of the reasons was because of the drainage holes.  The drainage holes in the red tray would close because the wood would expand when in constant contact with the water.  With the white try, I used water-proof caulk to glue in pieces of a plastic straw to create a waterproof barrier so the holes would stay open.

Forcing the stream from the baster through the small drainage holes makes it seem like a water jet. 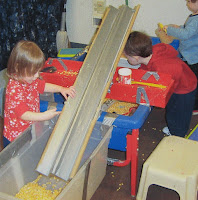 The wooden tray had another important function.  It often served as a base for other apparatus.  On the left, it provided the incline for a chute apparatus.  On the right, it was combined with a crate for an apparatus with tubes and pipes.
At some point in time, I wanted to expand the area that encompassed the sand and water table.  To do that I started using a second smaller table in conjunction with the larger blue table.  To connect the two tables, I started using the the wooden tray as a bridge, much like I did 28 years before.  Now that bridge also became a container into which the children could fulfill their natural inclination to be transporters.  And transport they did. 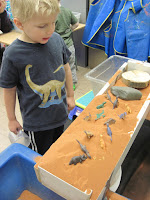 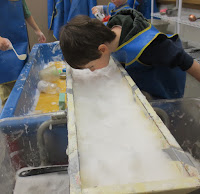 From sand to suds. 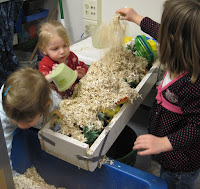 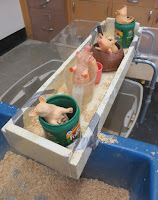 From dinosaurs and animal bedding to a row of pigs in containers.
When I look back on the 28-year life of this humble apparatus, I am in awe.  It started as a bridge and became a tray.  Then it alternated between being a tray, a base and a bridge again.  And in each new setup, the children found multiple ways to incorporate it into their play and explorations.  Not bad for a few pieces of wood nailed together.

It makes me wonder if this would be a good metaphor for teaching: a thing that never looses it roots but evolves over time to be versatile enough to meet the children's needs for play and exploration at any given time with whatever materials are on hand.  And, at least once in its life, needs a major makeover or re-do to address any flaws and to look and feel fresh and alive again.