Over 20 years ago, I built a water fountain for my sensory table.  I built it right after I redid the plumbing in my house.  When I turned the water on, water came squirting out of the pipes all over the basement.  My very first thought was: Wow, I bet kids would love to play with leaky pipes.  I kid you not and that gives you an idea of how I think.  However, first I had to fix my leaky pipes and then, with the left over copper pipes, I made a water fountain for the children.  The photo of my original fountain below is not so good because I had to take a digital picture of a print. 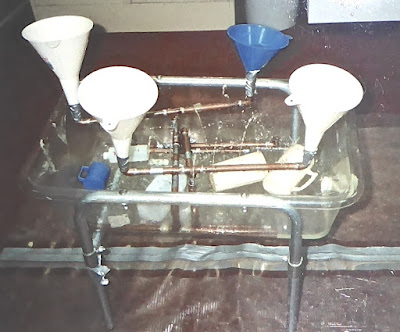 I soldered copper tubing and connectors and elbows together to make this.  I taped funnels onto the ends and then drilled holes in the top pipes.  I drilled too many holes so I had to duct tape some of them up again to increase the pressure so the water would actually squirt out of the fountain.

That water fountain lasted me many years until I made a new one in 2006 out of PVC pipe.  Since I had a bigger table, I was able to build a bigger fountain.  You can see how I built it on an earlier post. 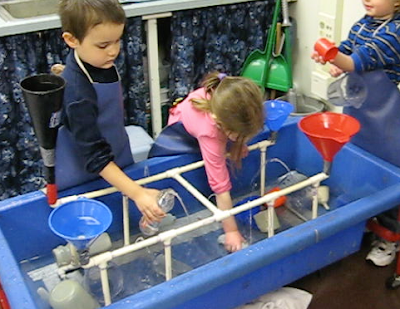 At the same time, I made a companion piece for the infant/toddler sensory table.  It was the same, only smaller. 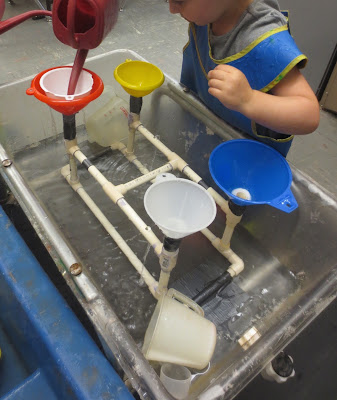 This year for the first time, I combined the two tables side-by-side in the sensory area. 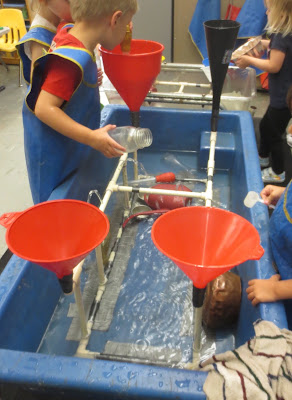 Interestingly, the children mostly played with one water fountain or the other.  The one thing it did do was increase the capacity of how many children could be there at one time.  How about 10? 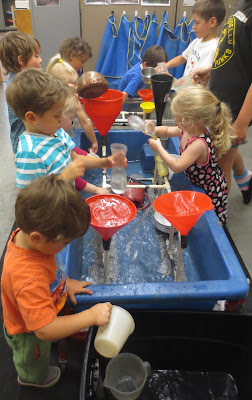 In the first video, two children pour water into the white funnel.  When that is filled, the child with the watering can starts to fill the blue funnel.  Watch as they experiment.

There are several things to note in the video.  The first is the height at which the water springs out of the fountain.  It is pretty anemic.  The second is that the child with the watering can has figured out that water going down the funnel into the pipes makes a "swirl."  He points it out to the other child and they both end up helping the "swirl" with their fingers.  The third is the level of the water in the sensory table.  It is almost up to the holes of the fountain.  That is important because it leads directly to the next exploration by these two children.

At some point in their explorations, one child noticed how high the water was in the tub.  He suggested that they fill the tub so it covers the holes of the water fountain to see what happens.  That is exactly what they did.  As the one child pours water into the yellow funnel, they watch the water bubbling out of the hole that is under water.

I am not always around to see everything that happens at the sensory table, but I was lucky enough to catch this sequence.  By the end of their explorations, the water in the tub was quite high.  Could they have overfilled the tub so water would spill on the floor?  Yes and I was surprised how careful and intentional they were with their experiments so as not to spill.

The last video relates to the first video.  It was taken on a different day with a different child.  The child found a funnel with a flexible tube extension on the shelves next to the table where the provisions for the table are displayed.  He has inserted it into the yellow funnel and begins to pour water into that funnel which is about 12" higher than the yellow funnel.


When you compare the first video to this one, you see that the child in this last video has created more pressure with the high funnel so the water squirts out with more force than in the first video.

So what is the point?  The point is that the sensory table in my classroom is the science area.  It is an area in which the children create their own science experiments.  They act, observe, theorize, test, and observe again.  I suppose I could have set up an experiment in which the children would pour water into funnels with the intention to have them observe the vortex created by the water draining from the funnel.  However, that would be so limiting compared to the multi-varied experiments they author themselves.