Back in January of this year, I wrote a post called transporting.  I ended the post this way: I am now wondering what would happen if I eliminate the table completely.  The shelves would stay, but what if I just put a plethora of buckets and tubs directly on the mats?  Stay tuned.

Well, I did it.  I took my sensory table completely out of the room.  I moved the shelves into the middle of the mat and filled them with scoops, long-handle spoons, and big and small containers. I set out four, five-gallon buckets and three large tubs.  I turned over one tub for a small table.  I also covered my clear toddler table to create another small table as an elevated work surface.  Here is the setup from two other perspectives. 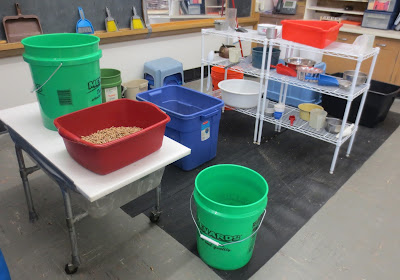 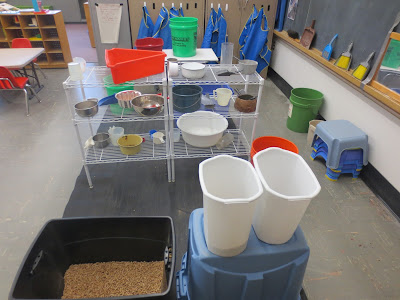 The medium I used for this "no sensory table" setup was fuel pellets.  They are compressed sawdust that are manufactured to be burned for heat in pellet stoves.

More than any other setup, this array of tubs and containers offered children the ways and means for transporting with small, medium, and large containers.

Watch as this 18-month-old transfers pellets from one small container to another.


A toddler spooning the pellets from Thomas Bedard on Vimeo.

As you might have noticed, he was not too successful.  That matters little because he is quite content with the trying while sitting on the floor with his legs wrapped around one of the containers.

These three-year-old children were using scoops to transport the pellets from a large container to a plastic garbage pail. 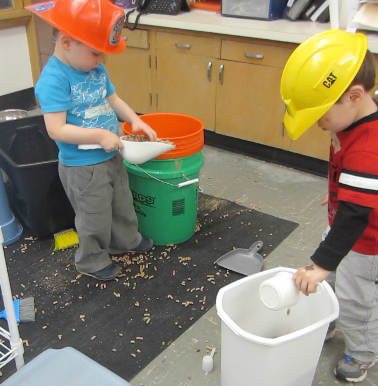 They knew it was a garbage can and as they poured the pellets, they stated: "We're putting garbage in there." 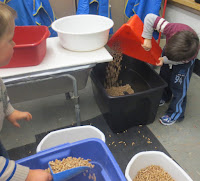 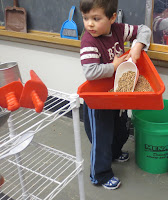 This four-year-old child takes pellets from a large container and puts them in a triangular-shaped container.  He then pours the pellets into a second large container.  This undertaking is challenging because of the atypical shape of the container he chooses to use to make the transfer.
Here is an example of yet another combination of containers used in transporting.  This time a child pours a five gallon bucket of pellets into a washtub.  He adeptly lifts and tips the green bucket so all the pellets end up in the white washtub.


Managing to pour the bucket of pellets from Thomas Bedard on Vimeo.

This is even a greater challenge, not only because the he is wielding a larger container, but also because the washtub in not secure so it moves as he pours the pellets.

Here is an example of transporting from the small table that is part of the setup.  The child is scooping pellets from the washtub to deposit them in the green bucket.


Transporting between levels from Thomas Bedard on Vimeo.

One of the more interesting aspects of this clip is that the child is using a homemade scoop he fashioned by inserting a clear plastic tube into a plastic measuring cup.  The new tool makes it harder to scoop but easier to dispatch the pellets accurately in the green bucket. 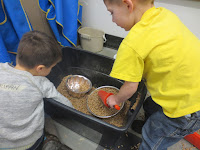 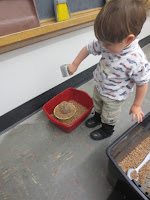 Here is one final combination of containers and transporting: containers inside of containers.  The beauty of this operation is the practice the children get with comparing volumes of the different containers.
This setup fostered many more examples of transporting.  The children seized the opportunity to transport to their hearts' content.  You might even conclude that it was a transporting paradise.

I have often been asked for ideas to set up sensory play in a shared space where the sensory table cannot be left out because another group uses the space.  Part of the answer may be to forget about the table and just have a variety of containers that can fit inside each other and then placed on the floor.  Commandeering a small table from the room for an additional work space would add an additional level of play making it more inviting.

If you can't use a sensory table, never fear, even you can create your own little transporting paradise.