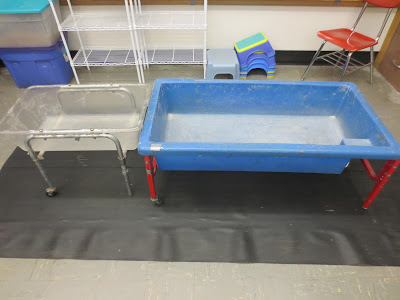 I place a large wooden tray on top of the toddler table.  To keep down the mess, I tape packing corners from an appliance box onto two sides and one end. 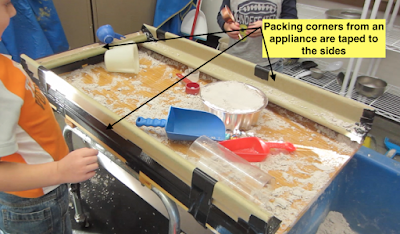 The side that reaches over the blue table is left open.  That allows the children to easily move sand from the wooden tray into the blue table. 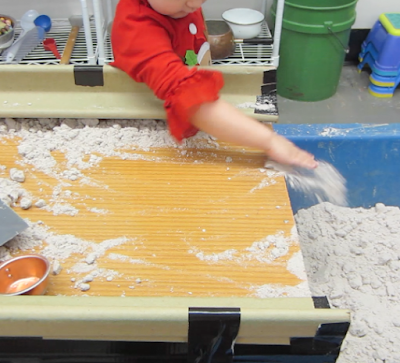 Besides the large wooden tray, I also set up a smaller wooden tray that spans the width of the blue table. 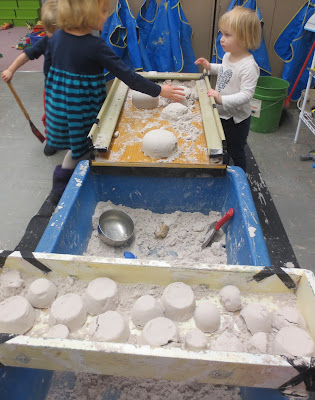 This picture highlights one of the salient features of Moon Sand.  It holds it shape so it can be molded.  That is also the reason I set up the trays with this type of sand because the sand forms take on more import when they sit above the table. 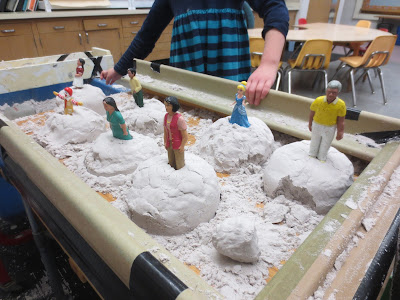 And once they were decorated, the children had to decide which birthday cake was theirs.  And whose birthday was it anyway?  Watch.

Each child chose a birthday cake that was right in front of them  One child did change her mind because her friend pointed out that the figure on the other cake in front of her had longer hair.  Life would be so good if it were everybody's birthday and everybody was happy with the birthday cake they got.  (Did you notice no one picked the Ronald McDonald cake?)

Here is another example of those social skills in action.  Two boys were putting Moon Sand in a jello mold.  According to one of the boys, they cannot fill it to the top because they are making a little garage.  He qualified it a bit when he said they were making a little, big garage.  The other child keeps agreeing with him and adds: "...and then let's build a house."

Building a garage from Thomas Bedard on Vimeo.

I have no idea how putting Moon Sand in a jello mold leads to making a garage.  But that is not important.  What is important is the natural way in which ideas flow back and forth in this give-and-take exchange between friends.

I write a lot about science and inquiry in relation to the apparatuses at the sensory table.  Just as important, though, are the opportunities they offer children to master the social skills such as negotiation and accommodation.

On a lighter side, I want to leave you with a video with a touch of mirth that happened at the table this particular week.  In the video, the child in the orange tries to remove the Moon Sand that he has packed into a small plastic measuring cup.  He hits it on the tray.  But on the upswing of the second hit, it flies out.  It flies out right into the cup of the child on the opposite side of the table. (If you look closely at the setup picture for the video, you can see the Moon Sand in mid-flight over the other child's hand.)  When the child with the red cup looks for the Moon Sand, he can't find it and wonders where it went.  It happens so quickly that neither of the children notice what happened.  The child's face for whom the Moon Sand vanished is simply beguiling.  Enjoy.

Where did it go? from Thomas Bedard on Vimeo.