APPARATUS II WITH THE CONCRETE TUBES

Back at the beginning of December, I wrote a post about an apparatus I made using concrete forming tubes.  I created a gradient with these wide tubes by cutting them to three different lengths. 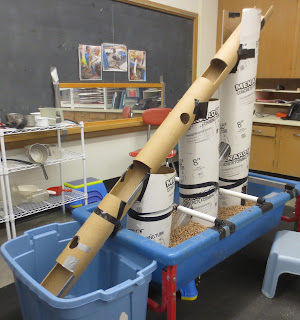 On the gradient, I placed a long cardboard tube with various holes for the children to use in their operations.

Someone commented on the post and thanked me for giving her an idea for how to use the large concrete tubes that were left over from the recent renovation of her playground.  The comment got me thinking that there must be other ways to use the wide tubes.  I began to play with the orientation of the tubes in my mind (See the right hand column of the blog under orientations.).  For the original apparatus, the tubes stood vertically in the table.   What would happen if I decided to use the tubes horizontally?

I cut the longest tube to match the middle tube so I had two tubes that were 2.5 feet long.  I embedded both tubes horizontally in a large wardrobe box.   I embedded the tubes through the sides of the box so a portion of each tube would extend beyond the box.  These sides I considered the width.  With the tubes embedded on the width, I laid the wardrobe box on its length so it completely spanned the table with some extra hanging over the edge of the table.  That allowed me to securely tape the big box to the lip of the table on both sides. 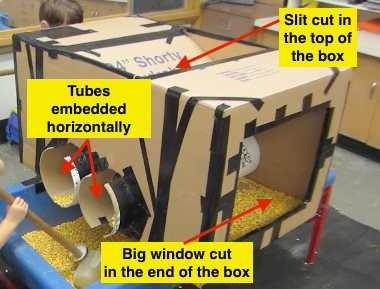 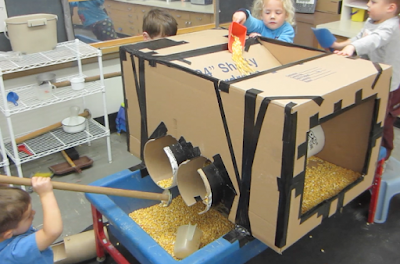 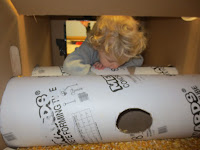 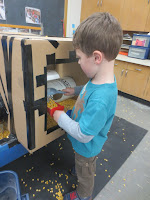 The windows on the ends of the box gave children a chance to experience working in a novel space that was both enclosed and open depending on what kind of operation they wanted to carry out.

The tubes had a couple of holes on the side, but were---for the most part---large tunnels to transport the corn back and forth from one end of the table to the other. 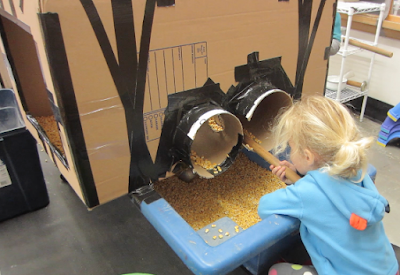 When you put it all together, this is what it looked like in action.  The child in the foreground is using a homemade plunger to pull corn out of a tube.  The child on his left---you can only see the top of his head---is working in one of the windows.  The two on the opposite side take turns putting corn in the hole in the top.


Big tubes in a box from Thomas Bedard on Vimeo.

There are two things to note from the video.  The first is that when the girl pours corn into the top hole, you can see corn fly out of the box onto the floor because it bounces off the concrete tube at the right angle to shoot out of the box.  You might call that a slight design flaw.  The second is the agency of the boy pouring corn into the top.  After pouring once into the top of the box, he picks up his stool and moves to the other side to pour corn in from there.  I am curious what prompted him to change perspectives.

Although I am always amazed and curious at what children do with any given apparatus, I was most puzzled at my thinking in regards to this apparatus.  For the original apparatus pictured at the beginning of this post, I thought I had a totally finished idea for the concrete tubes.  The idea was fully formed to the extent that I did not even entertain other ideas.  Case closed.  That was so up until someone commented on my blog that now she knew what to do with her concrete tubes.  All of a sudden I was jolted into thinking that there must be other ways to use the concrete tubes.  Why had I completely stopped thinking about ways to use the concrete tubes when I built the first apparatus?  Why did the comment on the post start the wheels turning again?

In any case, I need to thank anonymous for the comment that got me thinking again.   Feel free to comment anytime.