CLASSROOM PICTURE OF THE YEAR REVISITED

Two years ago, I started posting my Classroom Picture of the Year.  I will do that again this year, but I would like to revisit the original post from 2013 because there is a sequel to that post that just occurred last month. Here is most of the original.

MY CLASSROOM PHOTO OF THE YEAR

I take thousands of pictures in the classroom every year.  The ones you see are almost exclusively from the sensory table.  My pick for classroom photo of the year shows a different area of my classroom.  It is an area that most teachers would consider off limits to the children.  The area encompasses a ledge and windows. 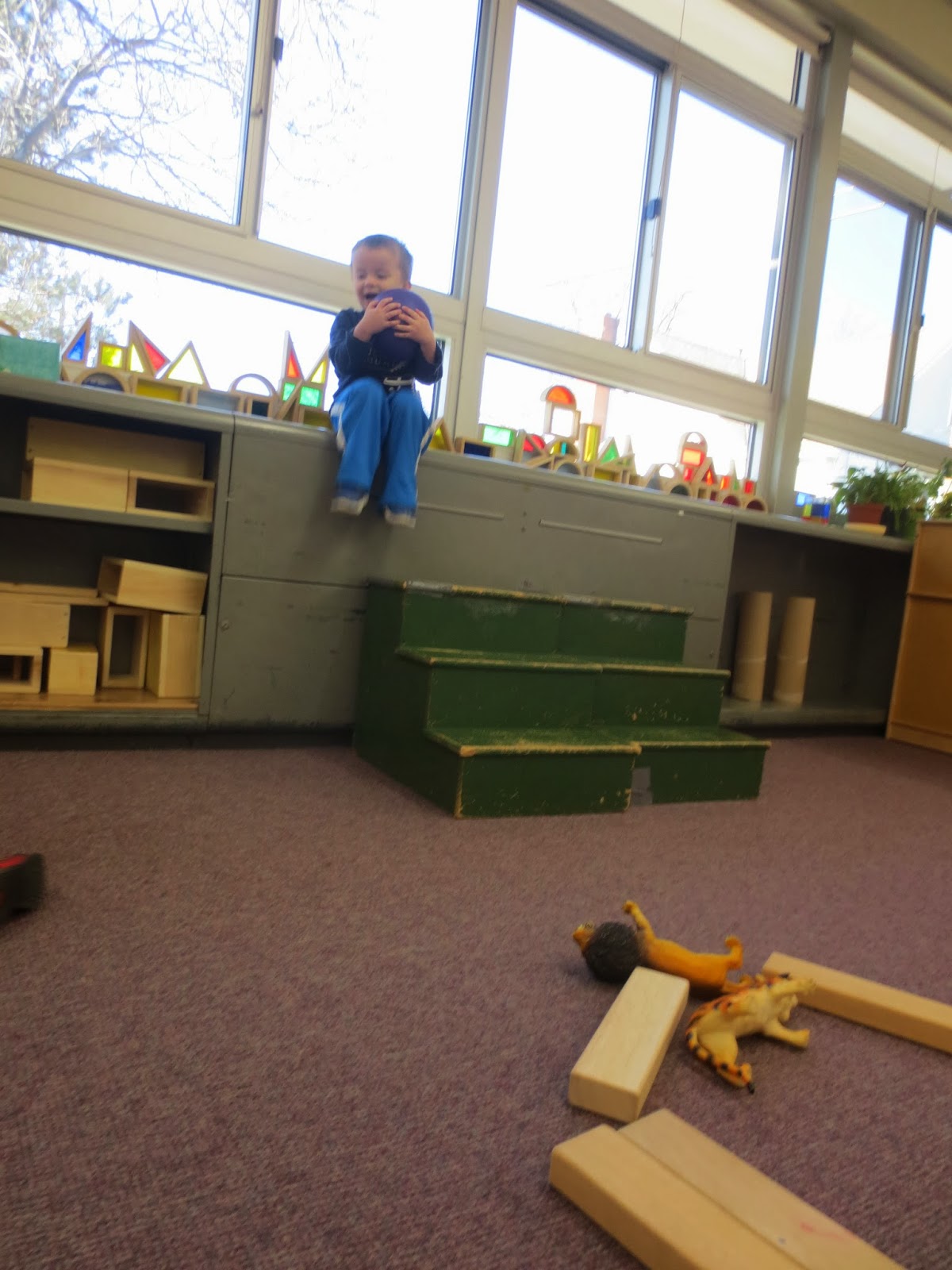 The ledge is three feet off the ground and a foot wide and accessed via wooden green steps.  Last year, I moved the color blocks to the windows so the children could look out to see the world in different colors. 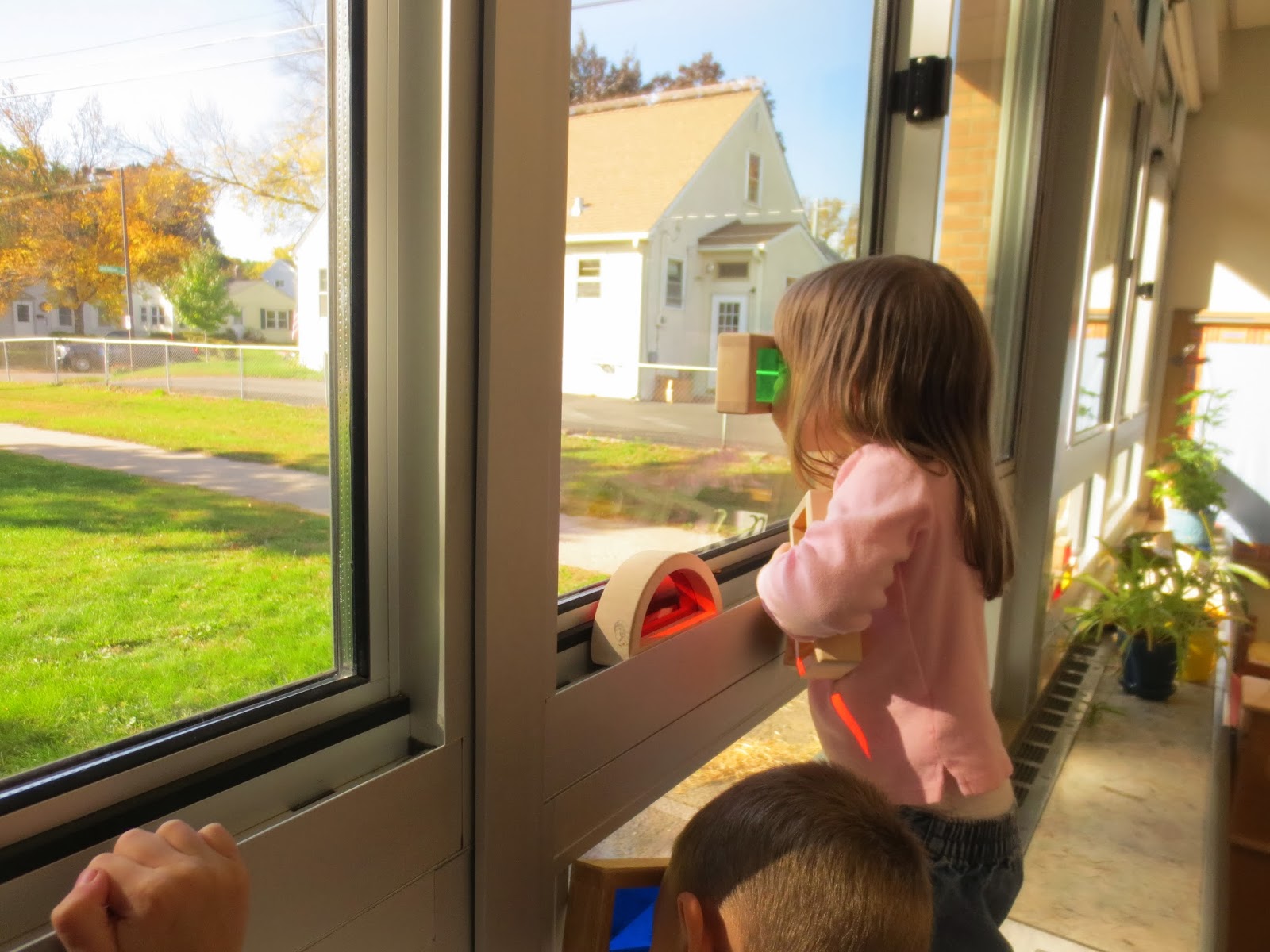 Now that you understand the space, here is my favorite classroom picture of the year.   I call it: Vestige of Play. 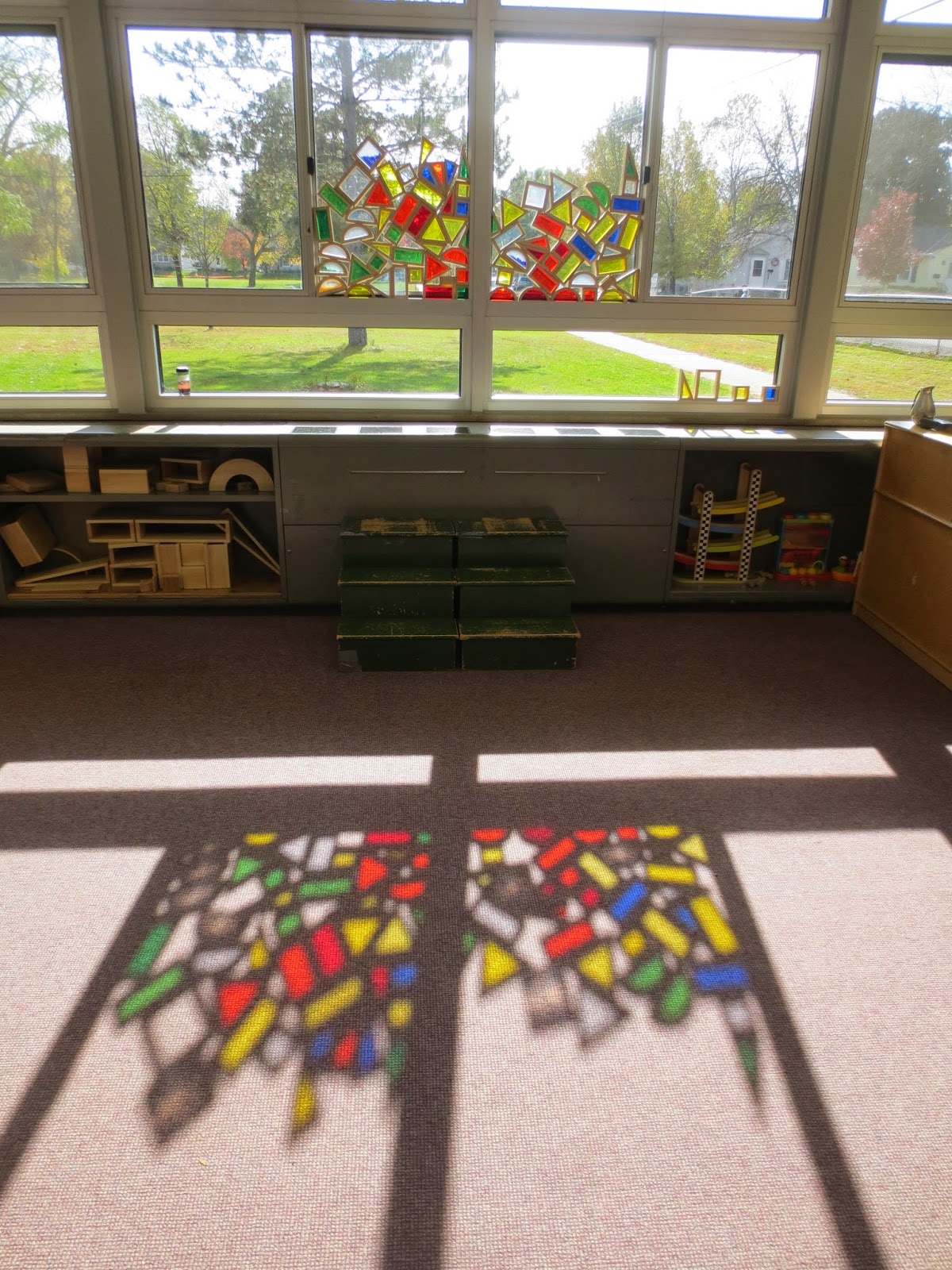 Like any good picture, there is a story.  The story begins with a serendipitous moment and weaves a continuing thread that actually lasts a couple of days.

It is cleanup time.  Two boys have been building with the color blocks on the ledge.  For cleanup, I ask them to put the color blocks back in the window.  Up until this point, the color blocks have resided in the lower window. One of the boys, who was not too thrilled about putting away the blocks, finally relents. But instead of putting the blocks in the lower window, he starts putting them in the higher window. He gives me a sideways glance as if to say: "If I am going to put them away, I will put them a way on my own terms."  I just tell him: "That works."  With no further prodding, they willingly stack the blocks in the higher windows. 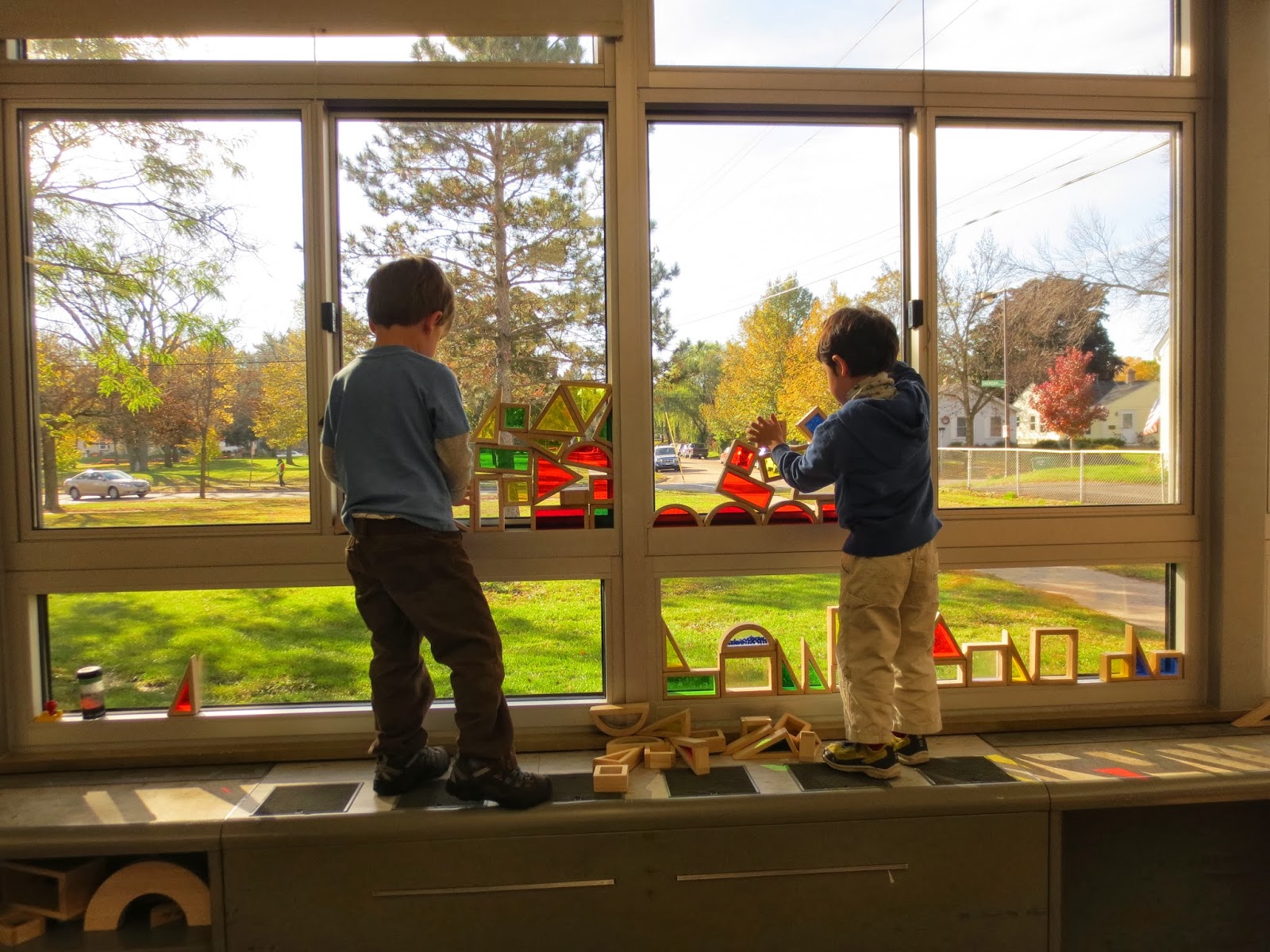 This is what it looked like when they were done.  It was impressive, but when I came back in the afternoon, the sun had worked some magic to make it a stunning sight---and my classroom photo of the year. 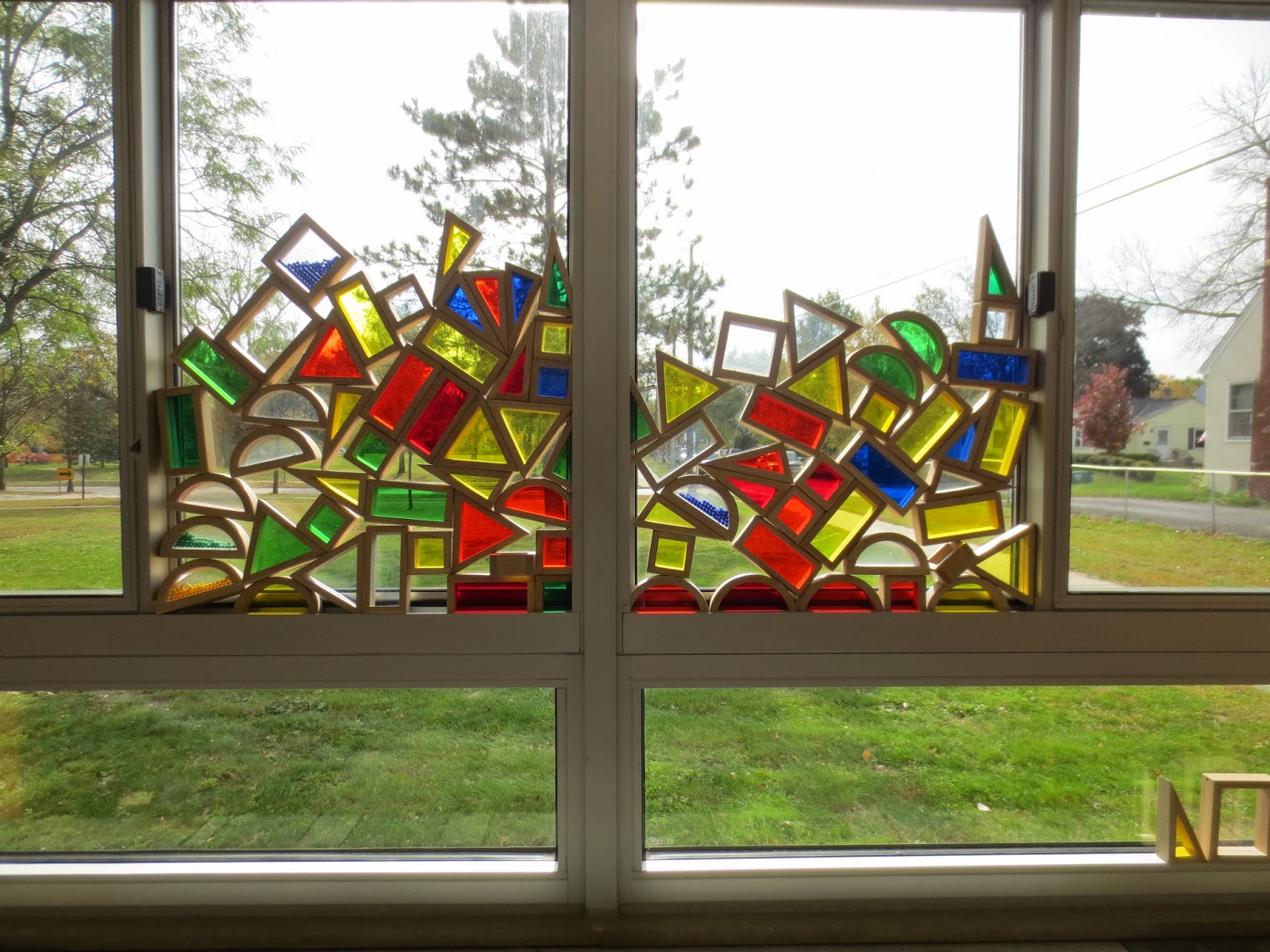 Three days later, another child noticed the blocks stacked in the two upper windows.  He set about stacking all the color blocks in one window. 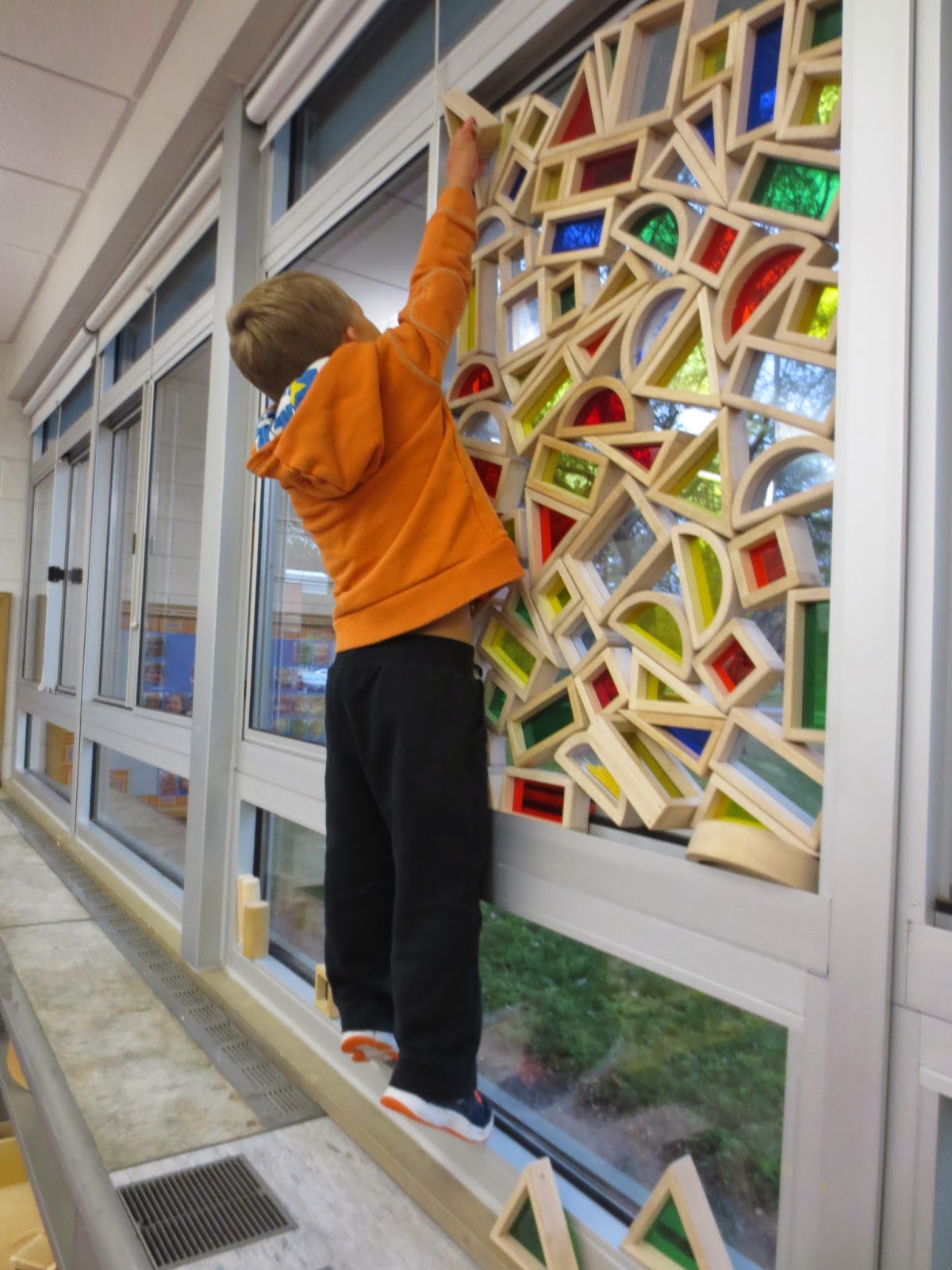 Did you notice he is on his tip toes on the bottom window ledge?  He is balancing the blocks while balancing himself.  That is quite a balancing act.

THE SEQUEL:
Two weeks ago, the child who filled the entire window with the blocks more than two years ago visited my room. During the year, I often have "alumni" visit when their regular school is out. I took the opportunity to show him what he had done in the window two years ago.  He promptly went to the window and started building again.  His older sister, a third grader, joined him. No need for tip toes this year. 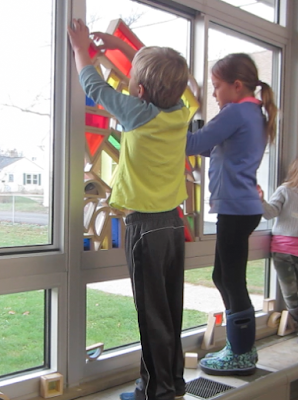 Think about this.  You have a first and a third grader visiting a preschool classroom.  How do they create some meaning to their visit that is not simply playing with the little kids?  This day, because the child could revisit documentation from two years ago, the brother and sister were able to climb up on the ledge to build a stain glass window. 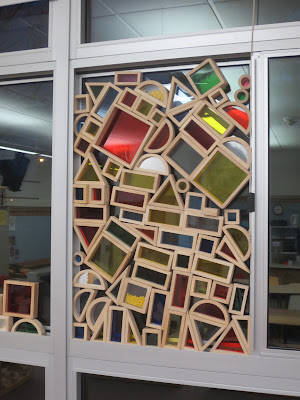 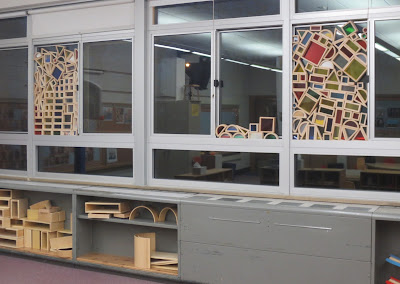 These two school-age children did not just recreate the original window.  Through negotiation and accommodation, they have re-imaged it.  In so doing, they have configured not one, but two striking spaces in the preschool room they can call their own.