The apparatus I left up for two weeks was the  Multiple Trays with Water. 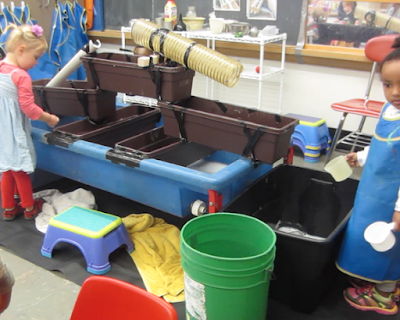 Besides the apparatus there were the provisions which I call Hodgepodge and Doohickies. 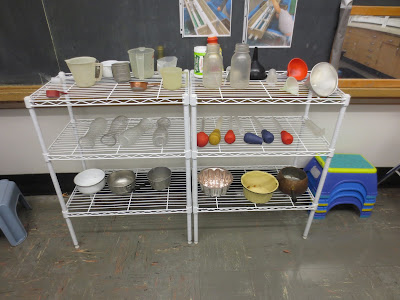 You will notice there is an assortment of measuring cups, funnels, bottles, pots and pans and basters.

The first video I shared with a parent shows the child trying to get some water from a bottle into a baster.  I ask the mother to look at the video because I was intrigued with his operation.  I also wondered where he got the idea for his actions.  Watch.

Filling the baster from Thomas Bedard on Vimeo.


I was intrigued by his actions because it looked like a scientist using a syringe to get liquid out of a bottle.  I asked his mother what she thought.  She wrote:

"I'm not exactly sure what H. was thinking, except that he may be modeling some things I may do in the kitchen at home??  That is my only thought.  I commonly make his sister's own yogurt pouches (instead of the store bought kind) and he always watches me transfer the yogurt into the pouch, which can kind of be messy and at the same time tricky.  However, I do not own a turkey baster!  The closest thing we have is oral syringes for children's Tylenol."

She did say later that his actions reminded her of how she gets the Tylenol out of the bottle using a syringe.

The second video I shared with a parent shows a child with a heaping container of suds that he says will explode in five minutes.  He also says we have to place it lower in the tray.  Watch.

It is going to explode from Thomas Bedard on Vimeo.

Again, I was intrigued with where his ideas might have originated.  I thought the pot full of bubbles looked like an explosion.  When mom looked at it with her son, she wrote:


"I showed it to W. and he said the bubbles had exploded onto his apron before and so he knew they were exploding bubbles. That is why he said he needed to put them down low - so they wouldn't explode up on to his face. This is very typical play for W. - I am guessing he is also thinking about volcanoes as his aunt was recently in Iceland and came back with stories of the volcanoes there. He is very interested in fireworks and anything to do with fire."

When I talked to her in class she also divulged that earlier this year a big house on the block burned down and that seems to have made a big impression on him.

I sent a set of two pictures to a third mother.  Her daughter had brought her dolly to school.  At some point in the afternoon, she decided to wash her baby in the sensory table. 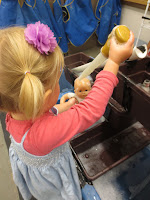 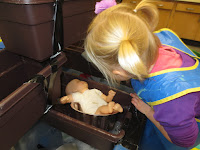 I wondered whether the bubbles had attracted her attention so she could give her baby a bath.  Or maybe the trays and container created an ideal spot for baby washing.

This is what mom wrote in response when I asked her why she thought L. was washing her baby.  She wrote:

"We talked a bit about the day she brought her baby to school and she definitely remembered! She said she was washing her baby because she was really dirty. When I asked how she got so dirty she explained that she had been playing in the mud :).

I have a few thoughts about it as well. First, it is important to know that that day was one of many in recent weeks in which she cared for that baby almost constantly throughout the day--she made sure her baby was fed, had clean diapers, and took naps. She would make sure to take care of her baby before she ate her own meals or got into bed for her own bedtime. I believe that this baby allowed her to experience her every day events in new ways. By helping her baby at home and out on our errands she was reinventing those experiences for herself. I would hear her talking to her baby, explaining where we were going and what we were doing. So when she saw the water in the sensory table at school I think she used the baby to interact with it in a new way and extend her own understanding of how the sensory table can be used."

After sharing the reflections with parents and getting their responses, I was reminded of something I read in a book this summer called: Dancing with Reggio Emilia: metaphors of quality, by Stefania Gamminuti.  In the book, she relayed a conversation she had with one of the teachers at Reggio Emilia about what to tell the parents about a child's day in school.  She turned it into a question: What image of the child does the parent wish to have?  And from the teacher's perspective: What image of the child are you going to offer to the parent? (p. 95).

I think I offered these three parents an image of their children that was unique, positive and intriguing.  I offered the images to see if they could give me more insight into the children's operations around the sensory table.  What I got back were rich narratives that added to my understanding of their children.  The children seemed to be taking their own unique experiences and combining them with the materials and setup to process those experiences and make new meaning from themselves.

I am glad I shared.

If you are going to the NAEYC national conference in Orlalndo in November, I am presenting on sand and water tables.  The session is on Thursday morning from 8:00-9:30.   Any readers of the blog who want to share stories or chat, I would love to find a time to meet.  Please feel free to contact me through my email: tpbedard@msn.com