The first time I set a box on top of the sensory table was for Big Box on Top in the spring of 2012. 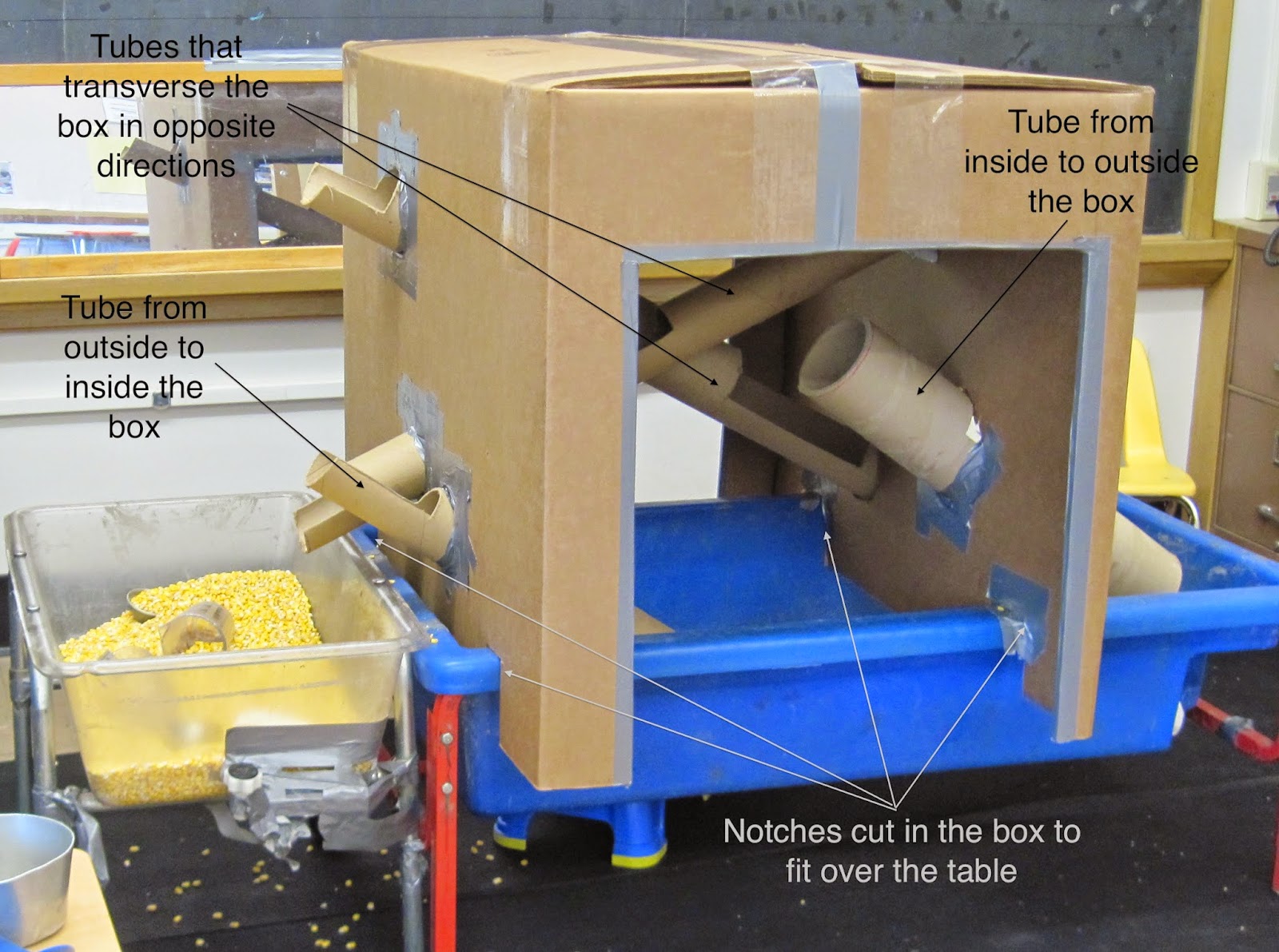 It was a sturdy box with big holes cut on two sides to allow access into the table.  Inclined tubes were embedded to allow the children to transport the corn into, out of and through the box.

The second time I set a big box on top was in the spring of 2013 when I changed a wardrobe box from an incline apparatus to a Horizontal Wardrobe Box. 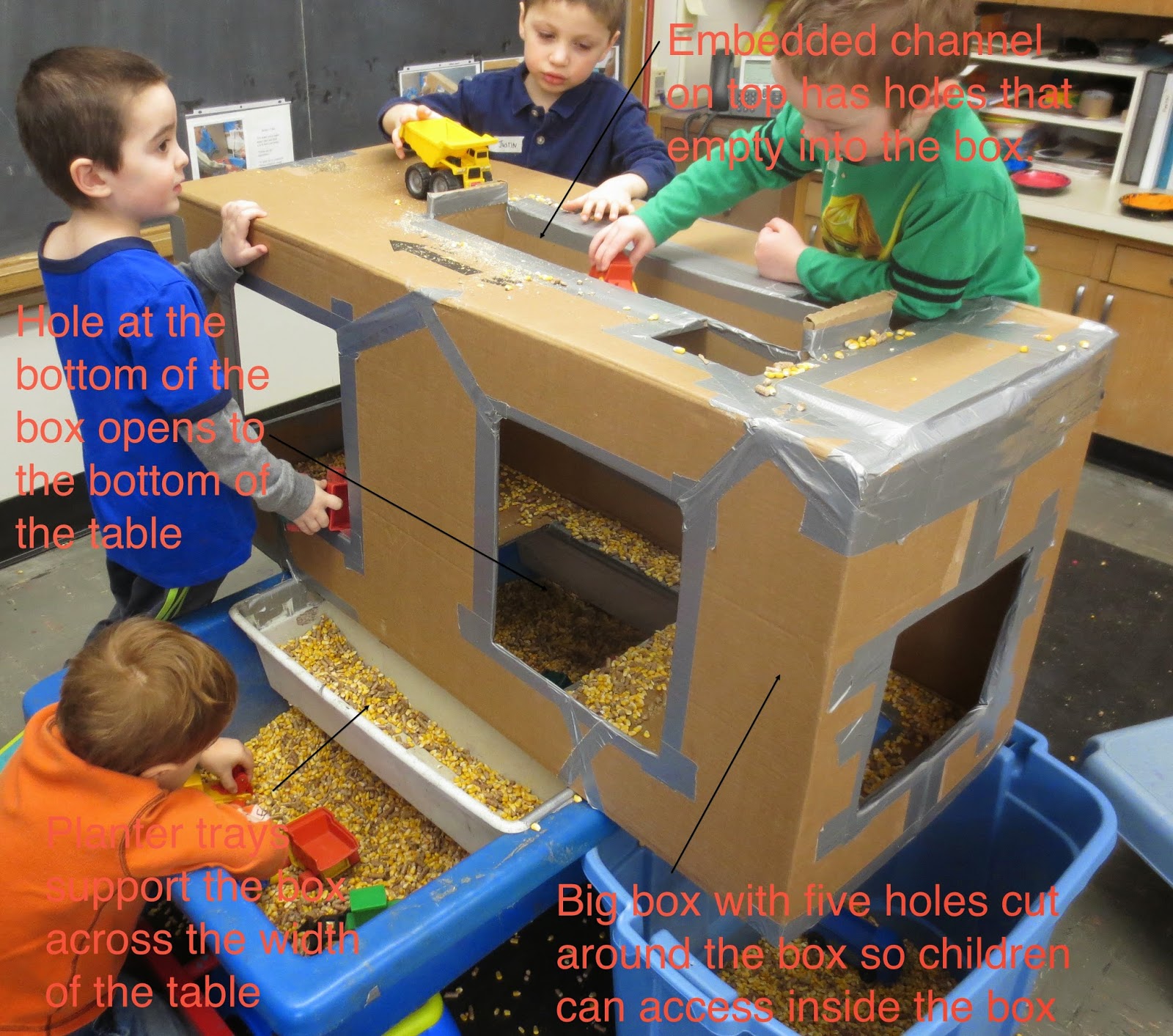 The most recent box on top is similar to the Horizontal Wardrobe Box.  There are holes cut all around the box and trays are used to support the box across the width of the table. 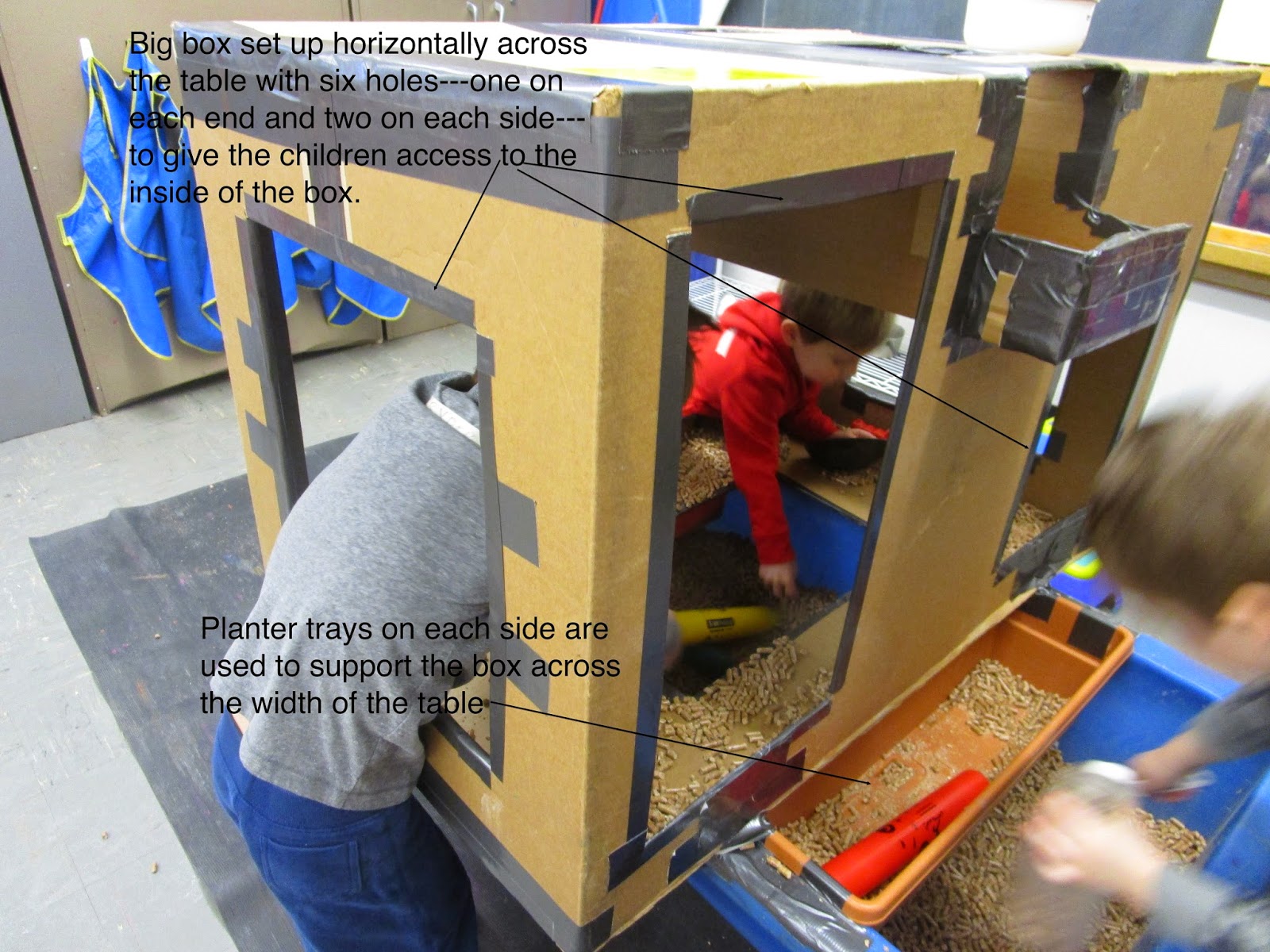 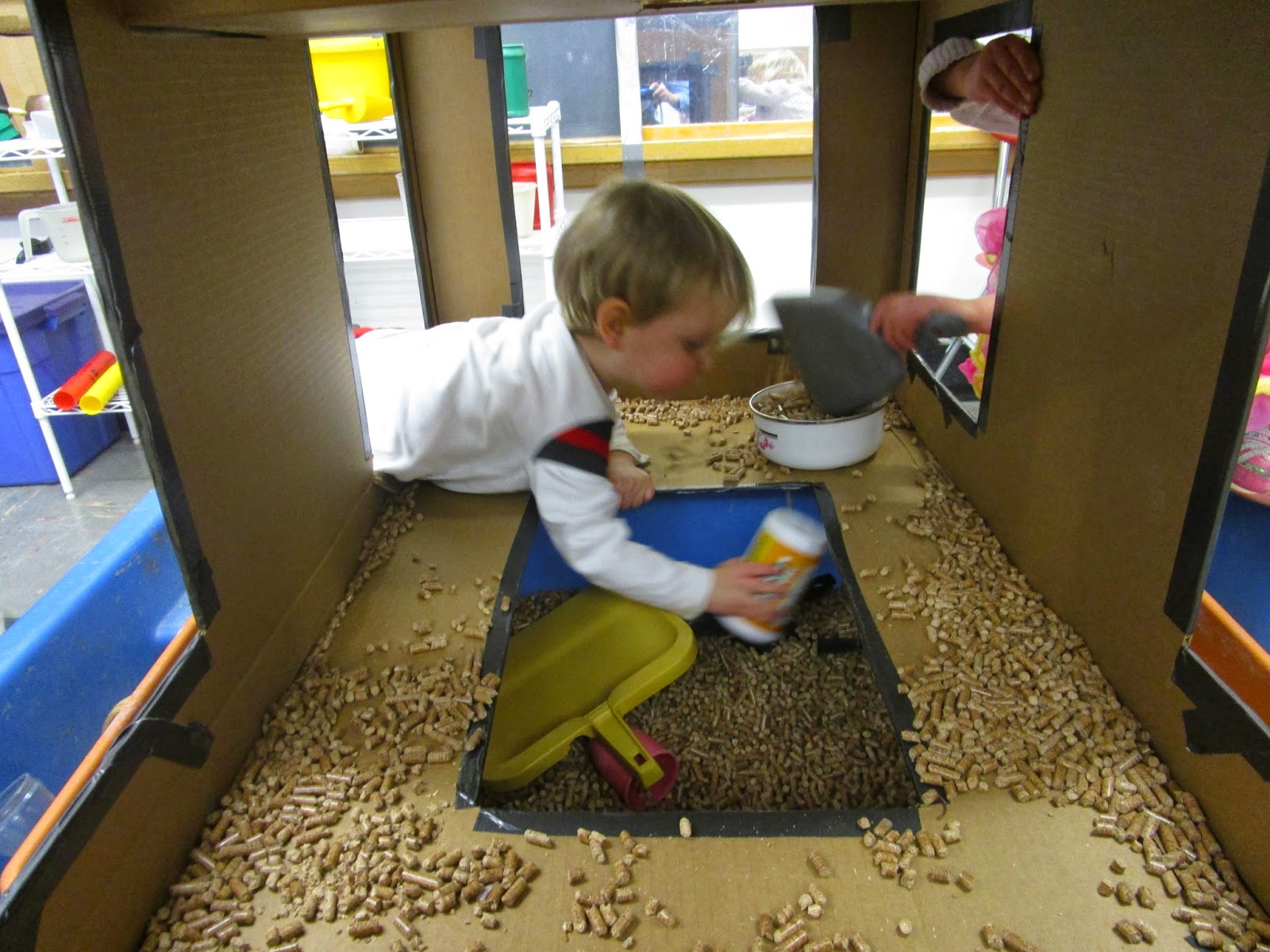 The invitation to scoop from the bottom of the table poses physical challenges and unique spacial awareness such as being outside the box but operating inside the box through two different holes. 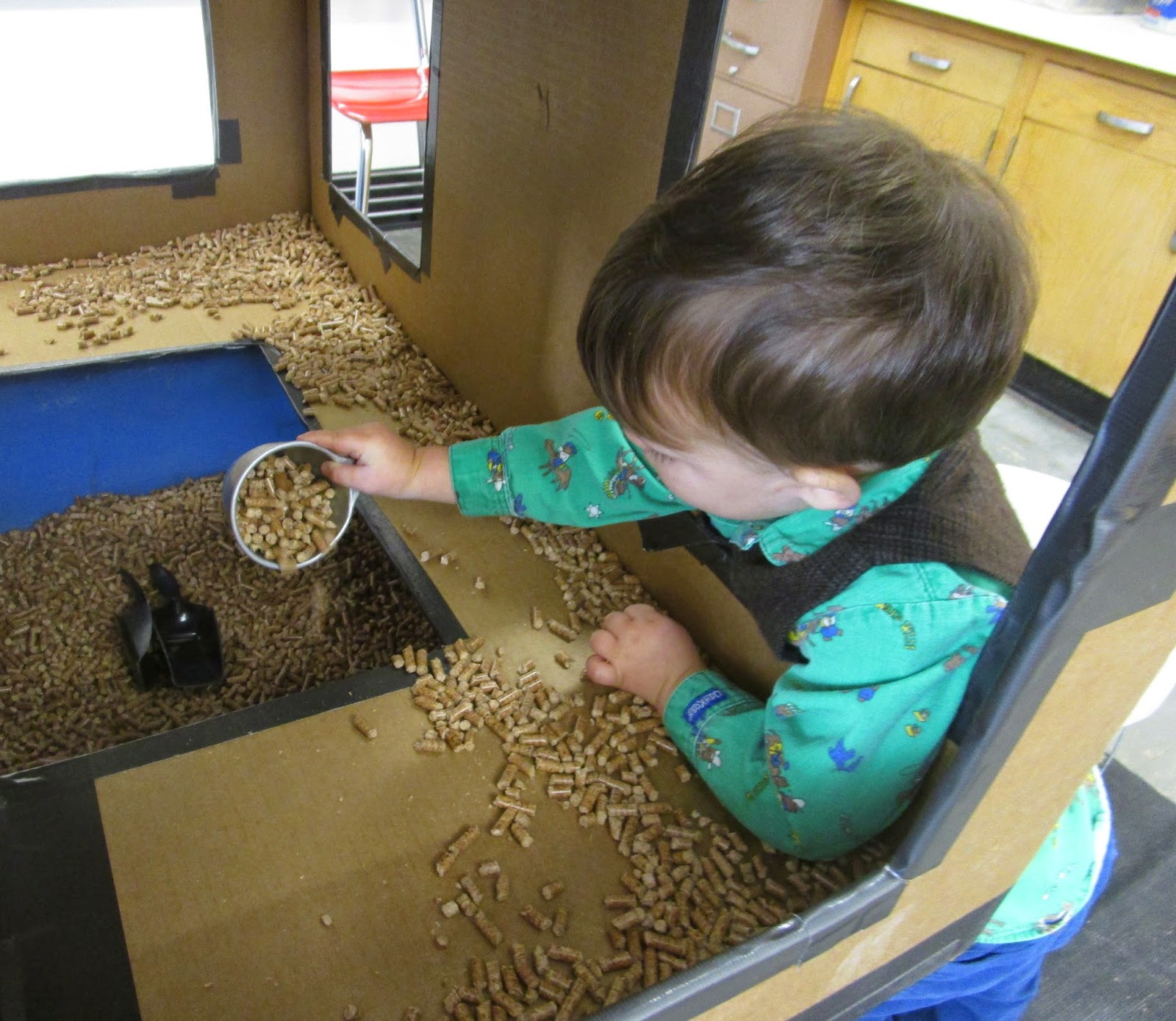 For this apparatus, I added a channel on top of the box that is embedded across the width of the box.  The embedded box is longer than the big box is wide so there is an overhang with a cut-away so the children can more easily access the channel. 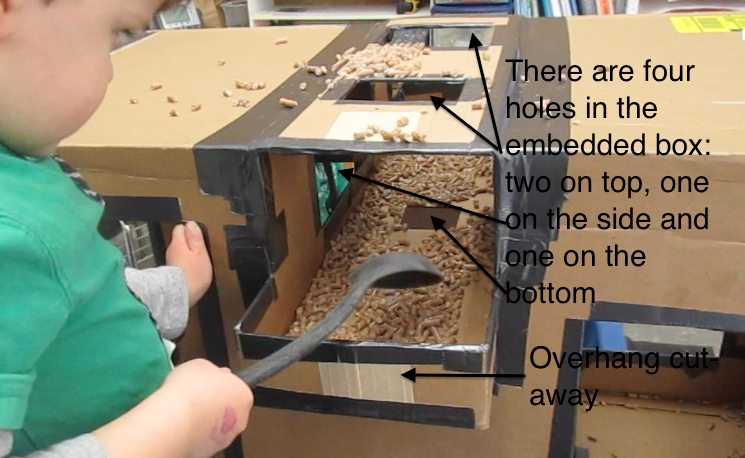 Let's see how that works.  In the video below, someone dropped pellets down the top holes so there are already some pellets in the channel.  The child uses one of the small brooms that is always at the sensory table to sweep the pellets down the hole in the bottom of the channel box.

Down with the pellets from Thomas Bedard on Vimeo.

This child does more than simply complete the second stage of moving the pellets to the bottom of the table.  At the beginning of the video, she references her sweeping action through the hole in the side of the  channel.  To do that, she begins with a plan of action.  She looks down the channel to see where the pellets are.  As she pulls her head around to watch the pellets drop through the hole, she keeps her broom inside the channel.  Once she has a clear view of the hole, she begins to sweep.  She then alternates between watching the hole where the pellets drop and her own sweeping action through a side window in the channel. Have you ever tried to sweep without looking directly at what you are sweeping?  When she no longer gets any pellets to fall down and only sees the bottom bristles of the broom, she brings her head back around so she can see where the pellets are that she wants to sweep down the hole.  It is still not an easy task, though, because she is sweeping at eye-level away from her body in a space that is only as tall as her little broom.

Out of cardboard, I rarely make the same apparatus twice.  If I have a box that can go on top of the table, it will become something different from previous box on top apparatus.  Why?  Because there are too many potential configurations to settle on just one.  In addition, those new configurations open up new possibilities for play and exploration first, for me and then, for the children.  This becomes a virtuous circle because as I watch children play and explore, I get new ideas for possible configurations, which gives me a new opportunity to play and explore, which in turn…