THE BIG BOXES MIGRATED TO THE SENSORY TABLE

Over the course of three weeks, I set up a box structure in the large muscle area of my classroom.  There were five boxes that had multiple openings into and out of the structure.  There were windows on the top and side so the children could check on the action outside of the boxes. Within the structures, there were more openings so the children could move between the boxes. All the boxes were taped together to make one large structure.  I called it the Big Box Fort. 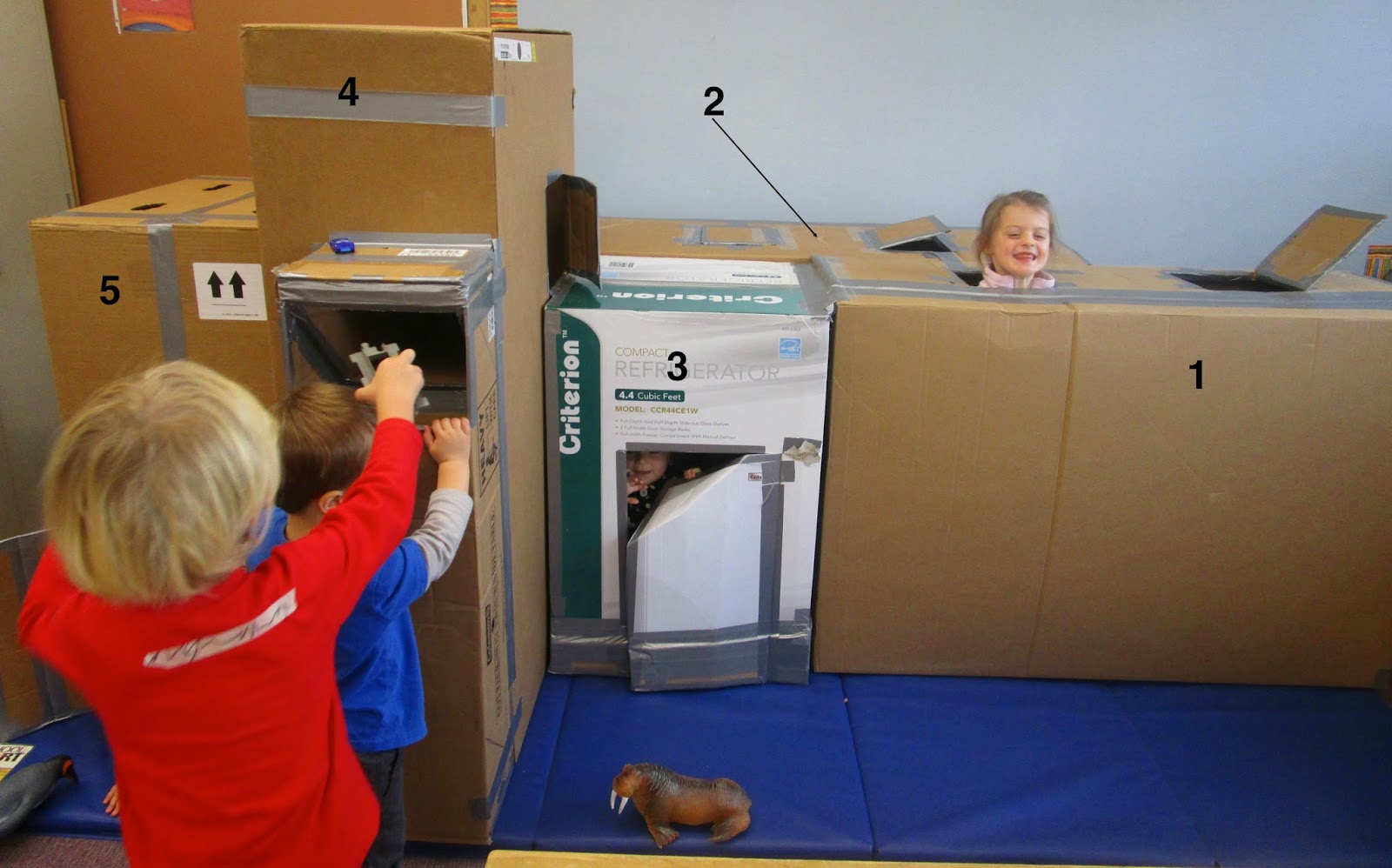 After three weeks, I took the three largest boxes and moved them to the sensory table. I purposefully decided to attach the boxes around the outside of the table because I had never done that before.  I also wanted to create interesting spaces that would invite children to play at the table both inside and outside of the boxes. 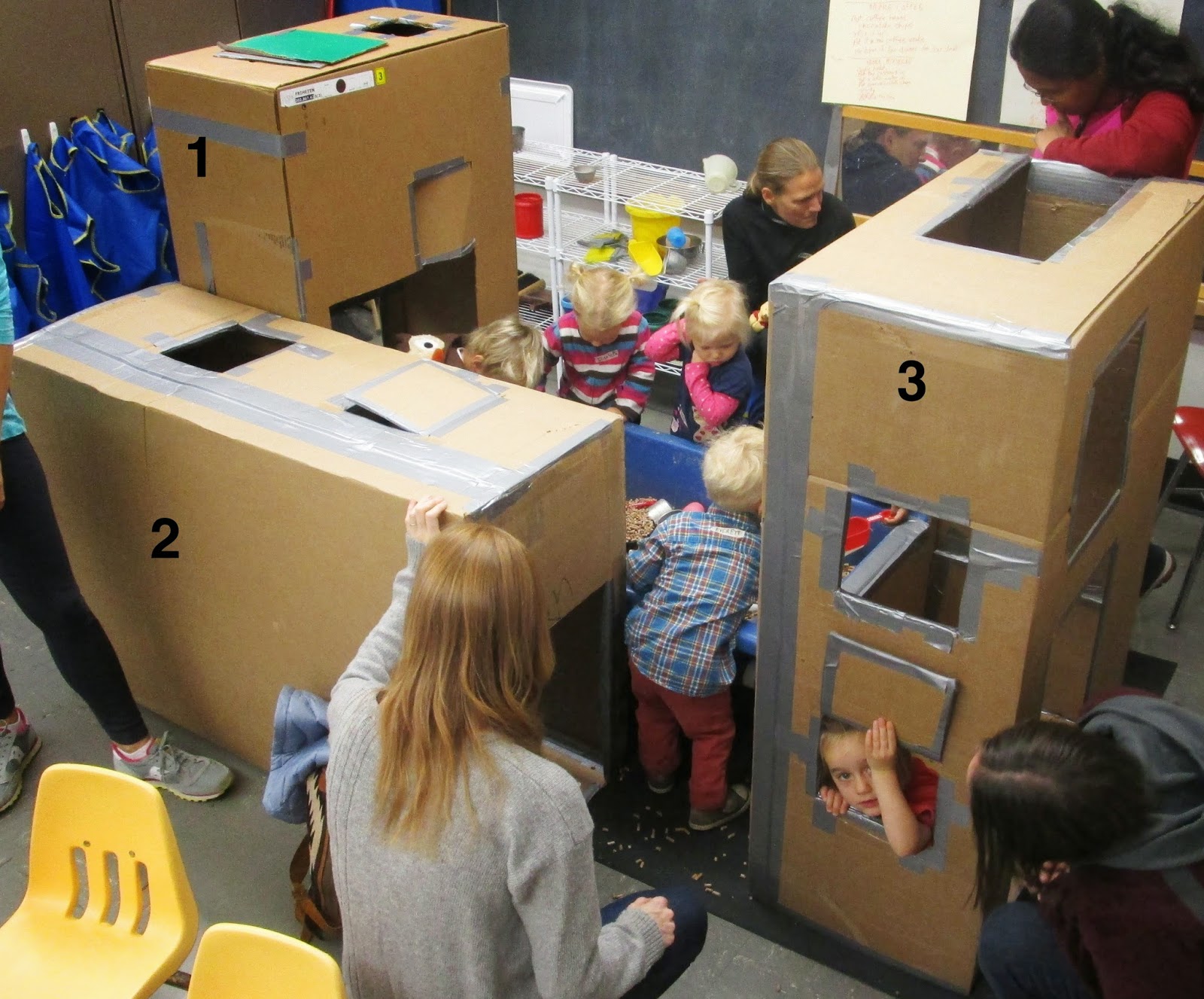 In trying to decide where to position the boxes, I had fun placing the boxes at different locations and orientations around the table.  Finally,  I set boxes 1 and 3 on the vertical and box 2 on the horizontal.  Box 3 stands alone at one end of the table.  Box 1 is also on one end.  Box 3 is attached to one side in such a way that it overlaps box 1.  Where boxes 1 and 3 overlap, they are connected by an opening. 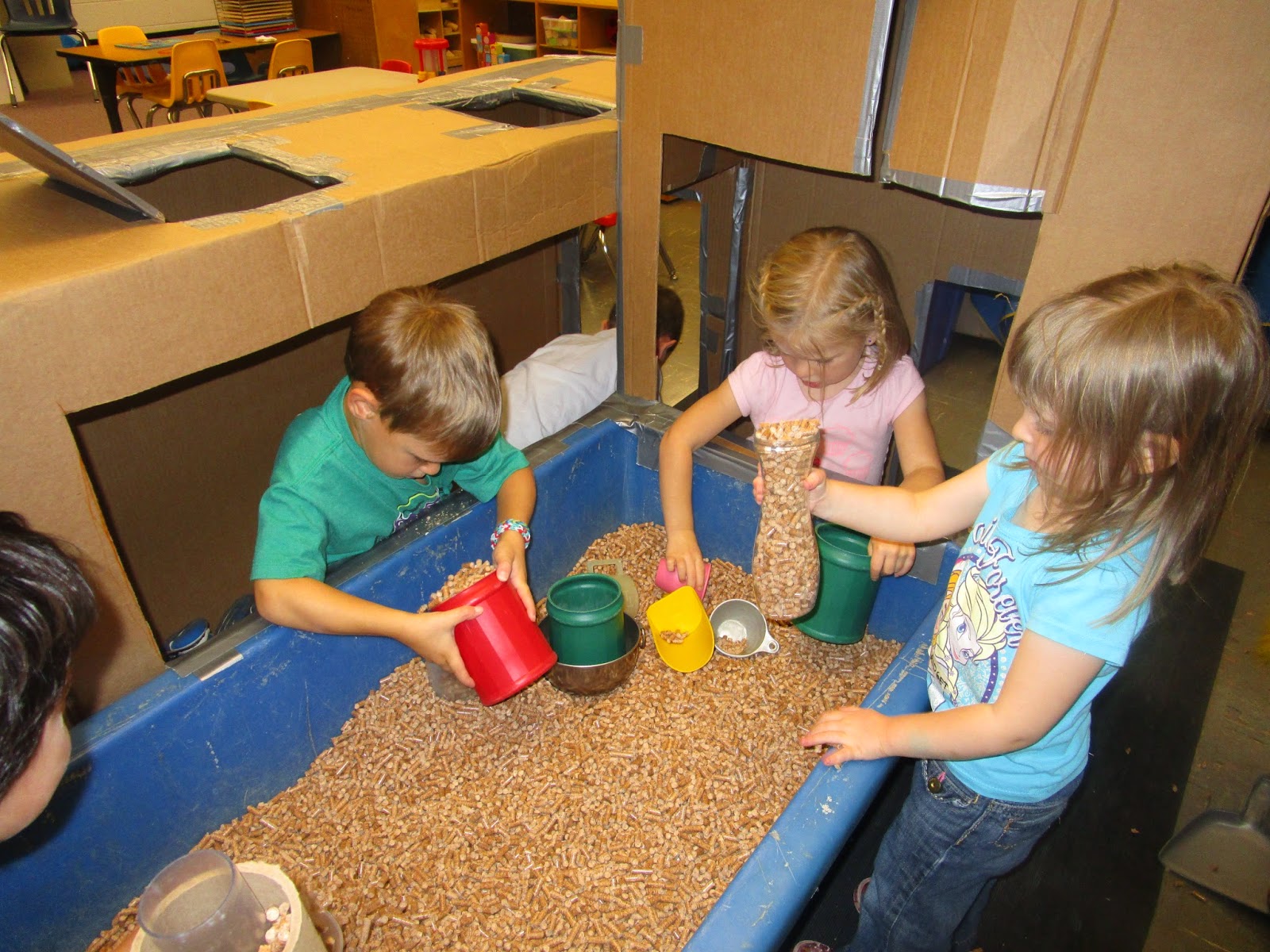 That allows the children to work in separate boxes or to move between the boxes in their play.

With any number of ways to arrange the boxes, why did I end up with this arrangement?  The one thing I knew I wanted was to connect at least two of the boxes so the children could move between boxes without having to come out of the structure.  After that, it was the interaction between myself and the boxes on that given day.  I am sure on another day, it would have come out differently.  Isn't that what play is all about?

I cut holes in the sides of the boxes using the height of the table for the bottom cut.  That allowed me to tape the boxes securely to the lip of the table. 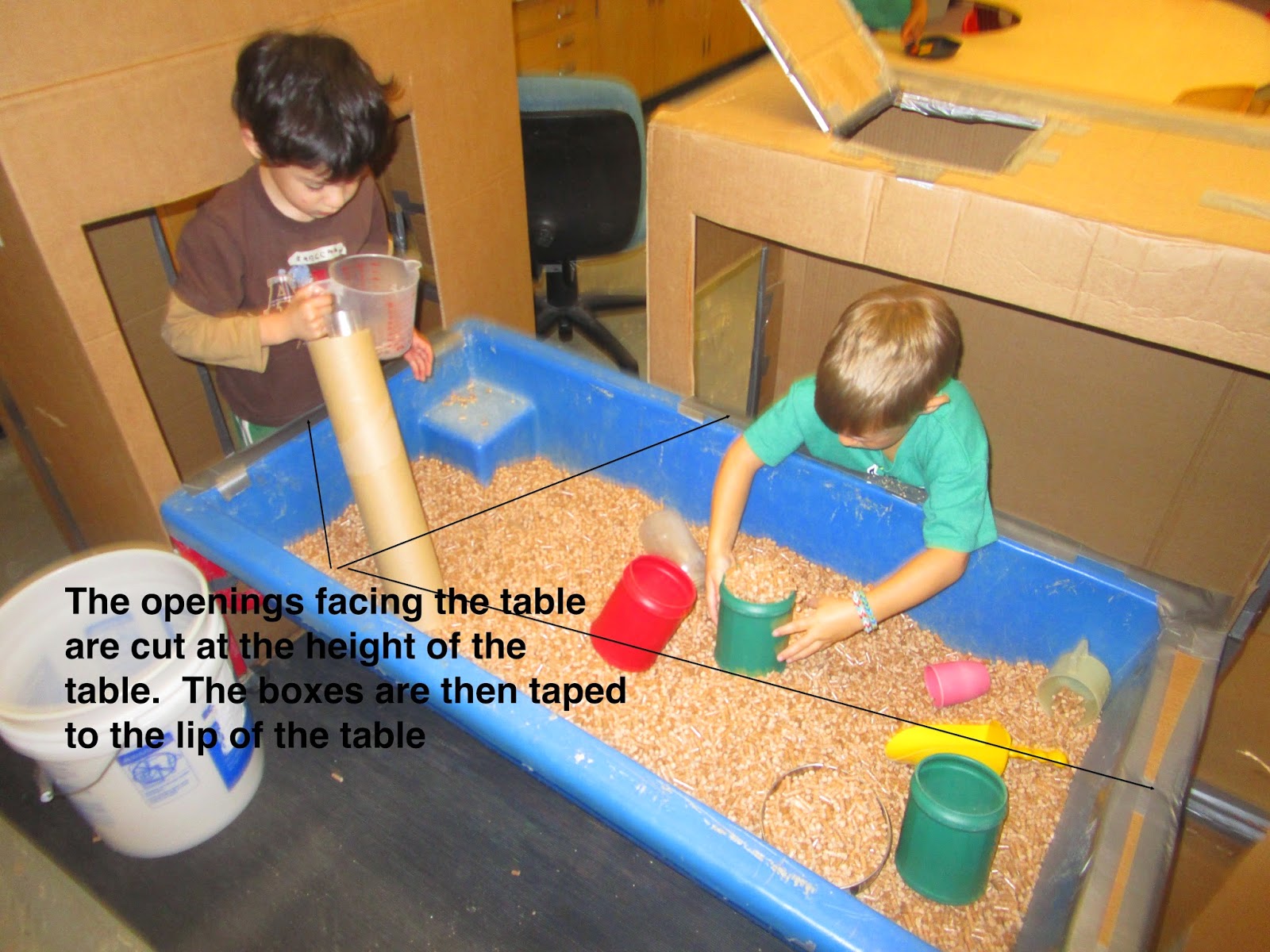 Just think for a second what kind of spaces are created by this structure.  First, there is the open space on the side of the table where there are no boxes.

There is another open space, the open space between boxes. 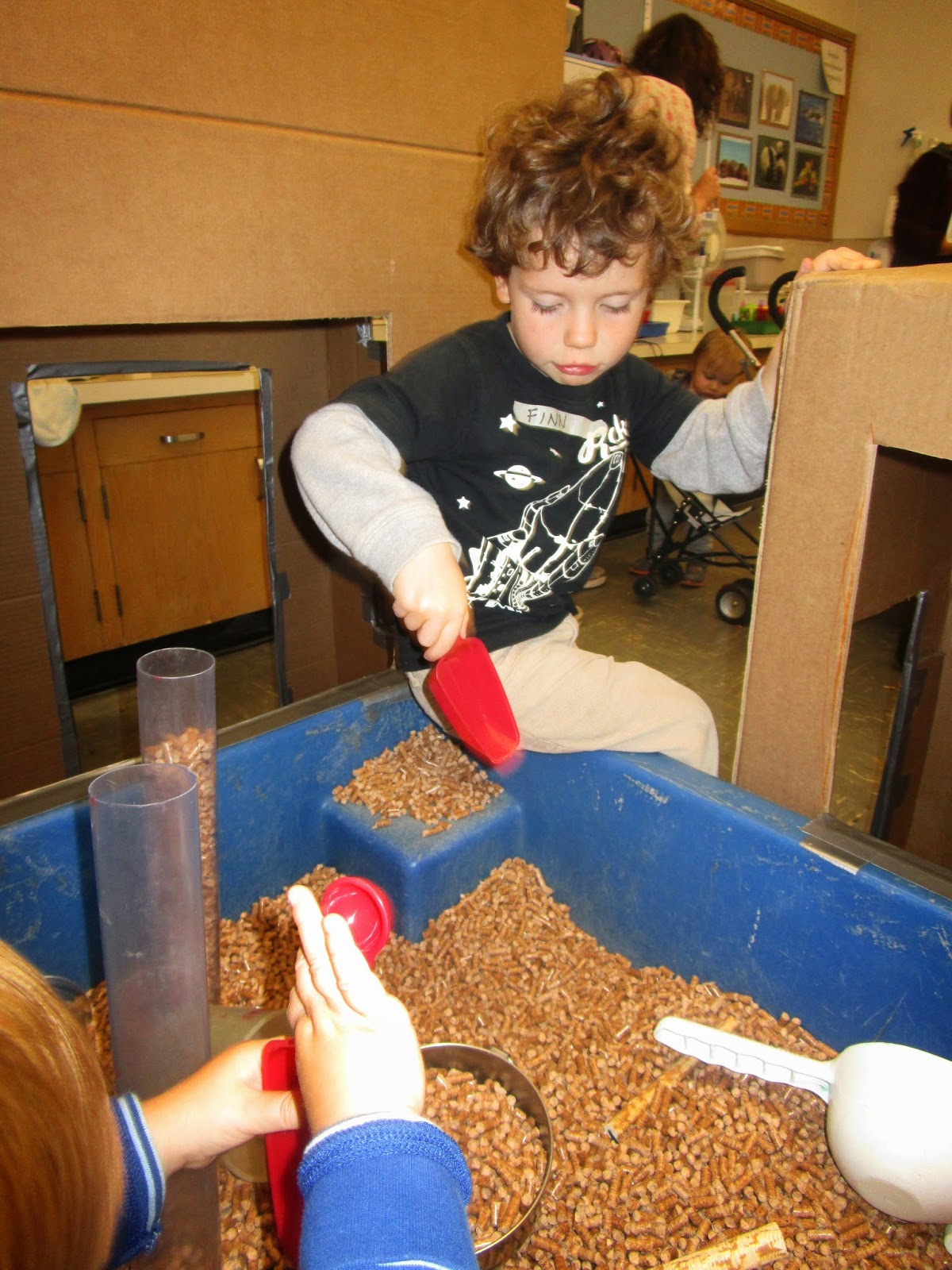 There are, of course, the spaces inside the boxes. 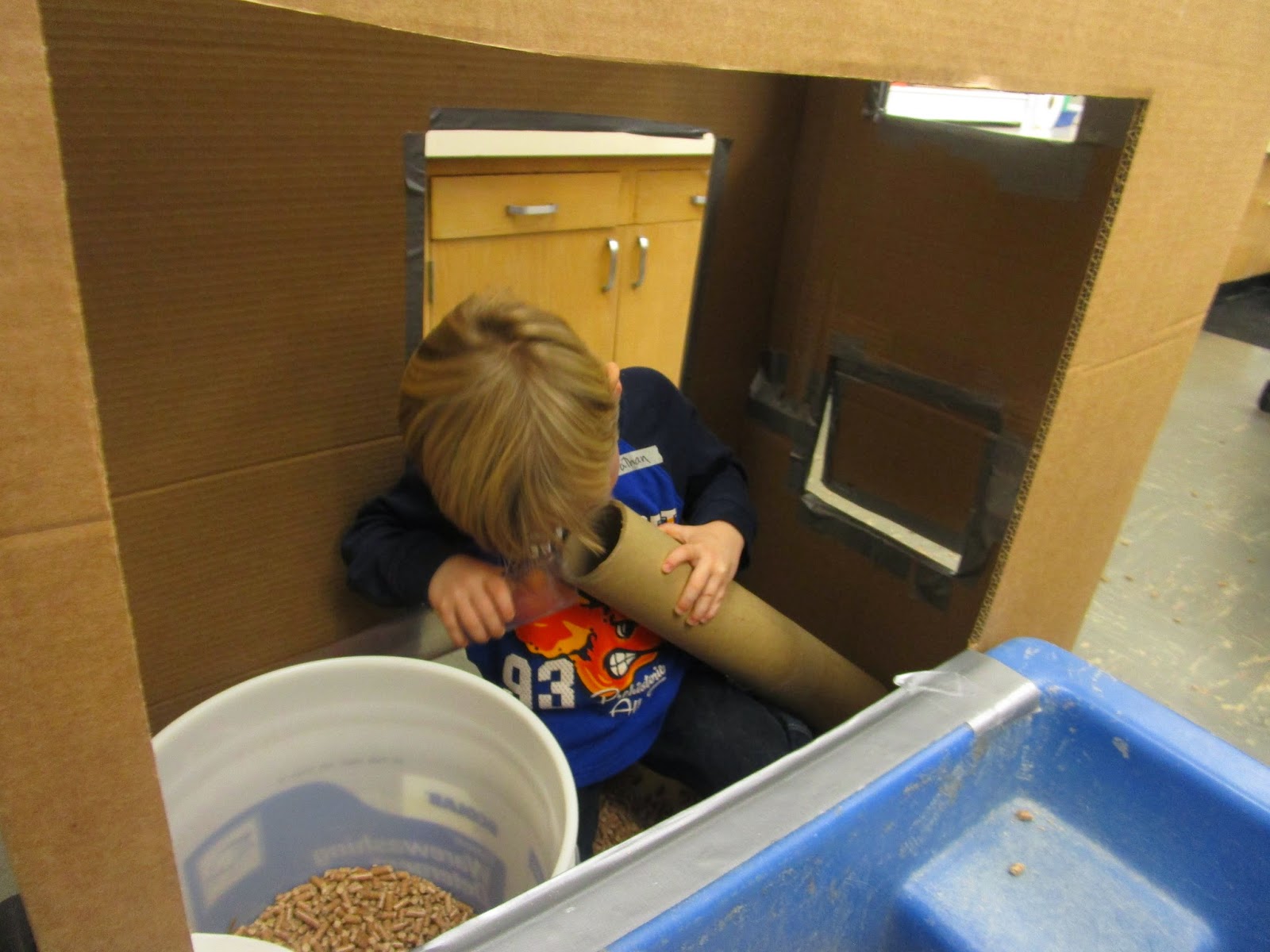 There is also a sort of hybrid space that is both inside and outside. 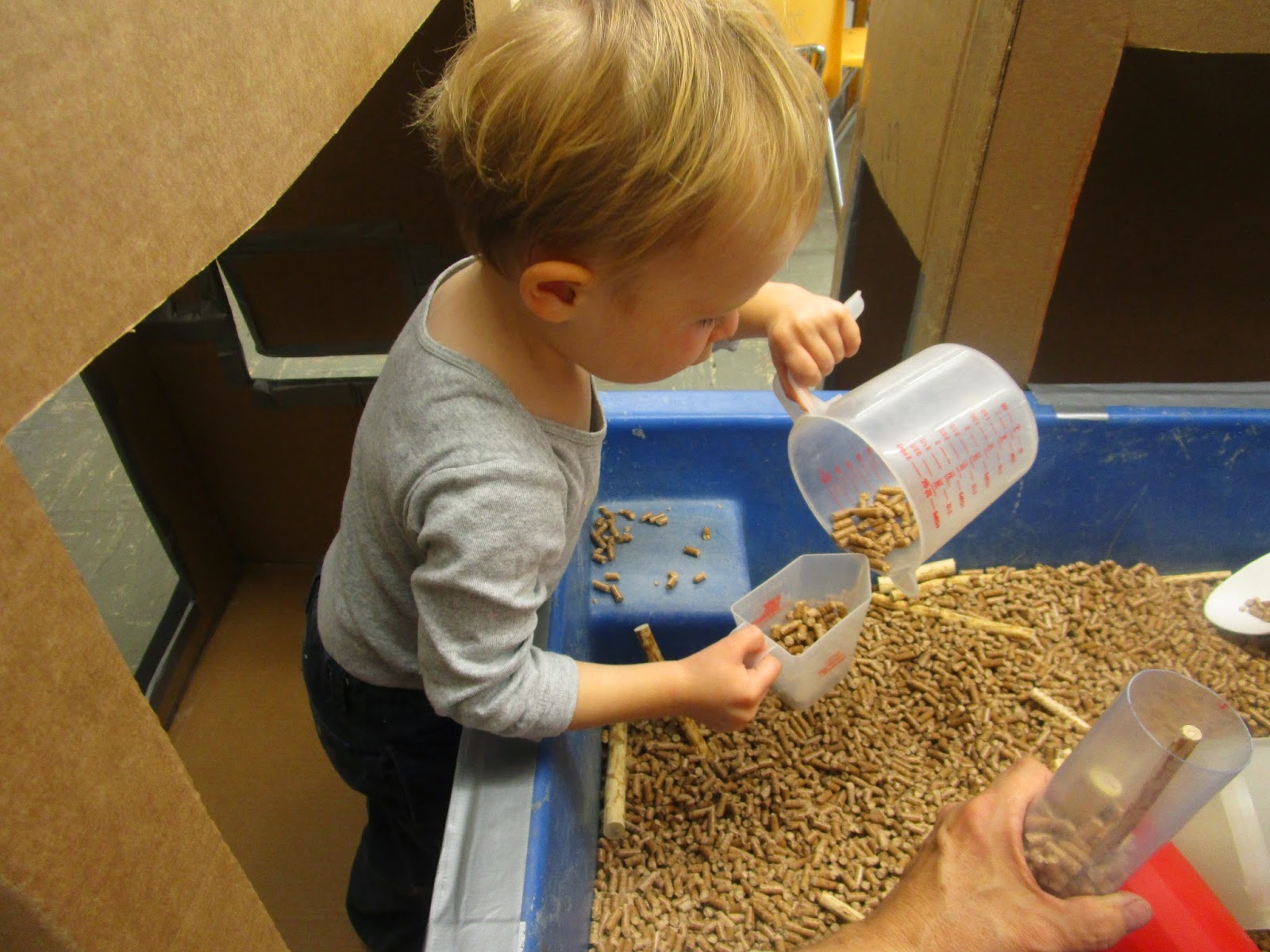 By far, this was the most popular type of play within this apparatus.  Children would enter the boxes and then lean out to play in the table.

I expected children to pour the pellets into the boxes.  Very rarely did they do that.  When they did, I had a bucket handy and was able to tell them to Put it in the Bucket. 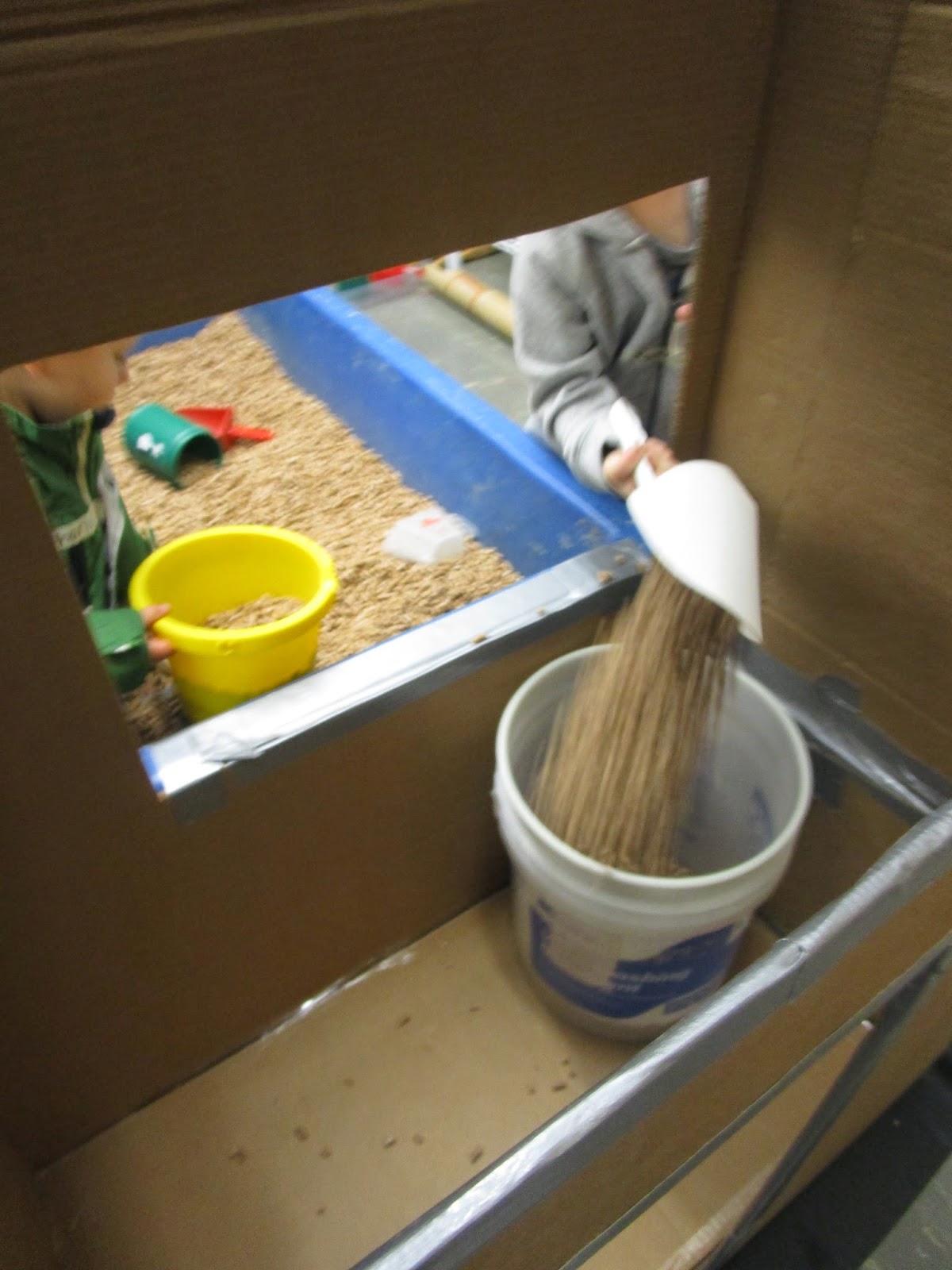 Axiom #1 on the right-hand column of this blog states that children need to transport what is in the table out of the table. 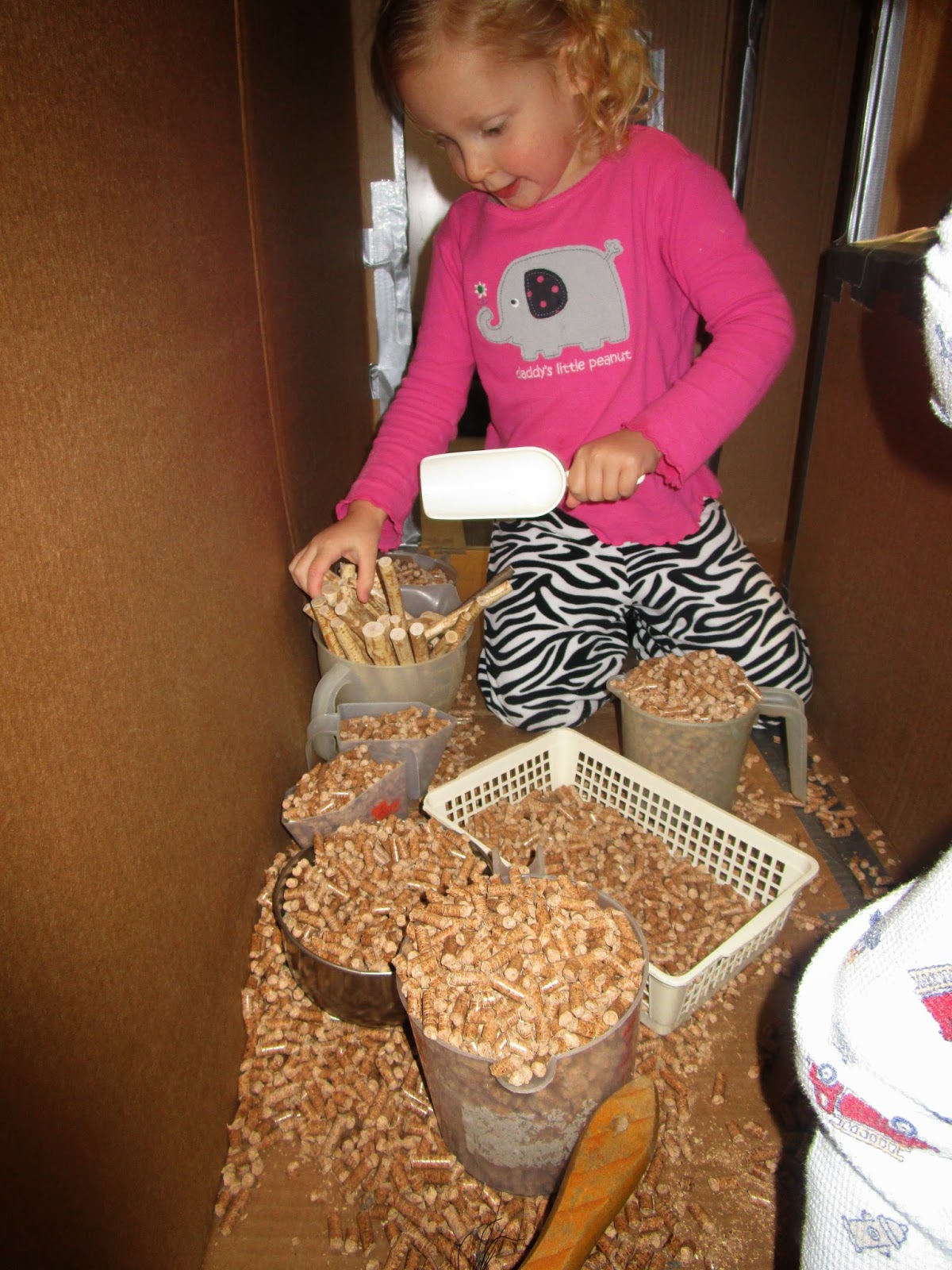 As you can see, this child has gathered a bunch of containers and placed them on the floor of the horizontal box.  She is busy filling those containers with the pellets and the sticks that she is transporting from the sensory table into the box.  (Many of her containers are overflowing, but the box does a nice job of containment.)  All-in-all, she is both focused and highly industrious.
A structure like this opens up many opportunities to play with different ways and means of transporting.  And if the children are able to constructively transport, the operations they formulate are productive and astounding.