A little over a year ago, I wrote a post on Cardboard Dividers.  This apparatus is basically sheets of cardboard spliced together to partition the sand table. 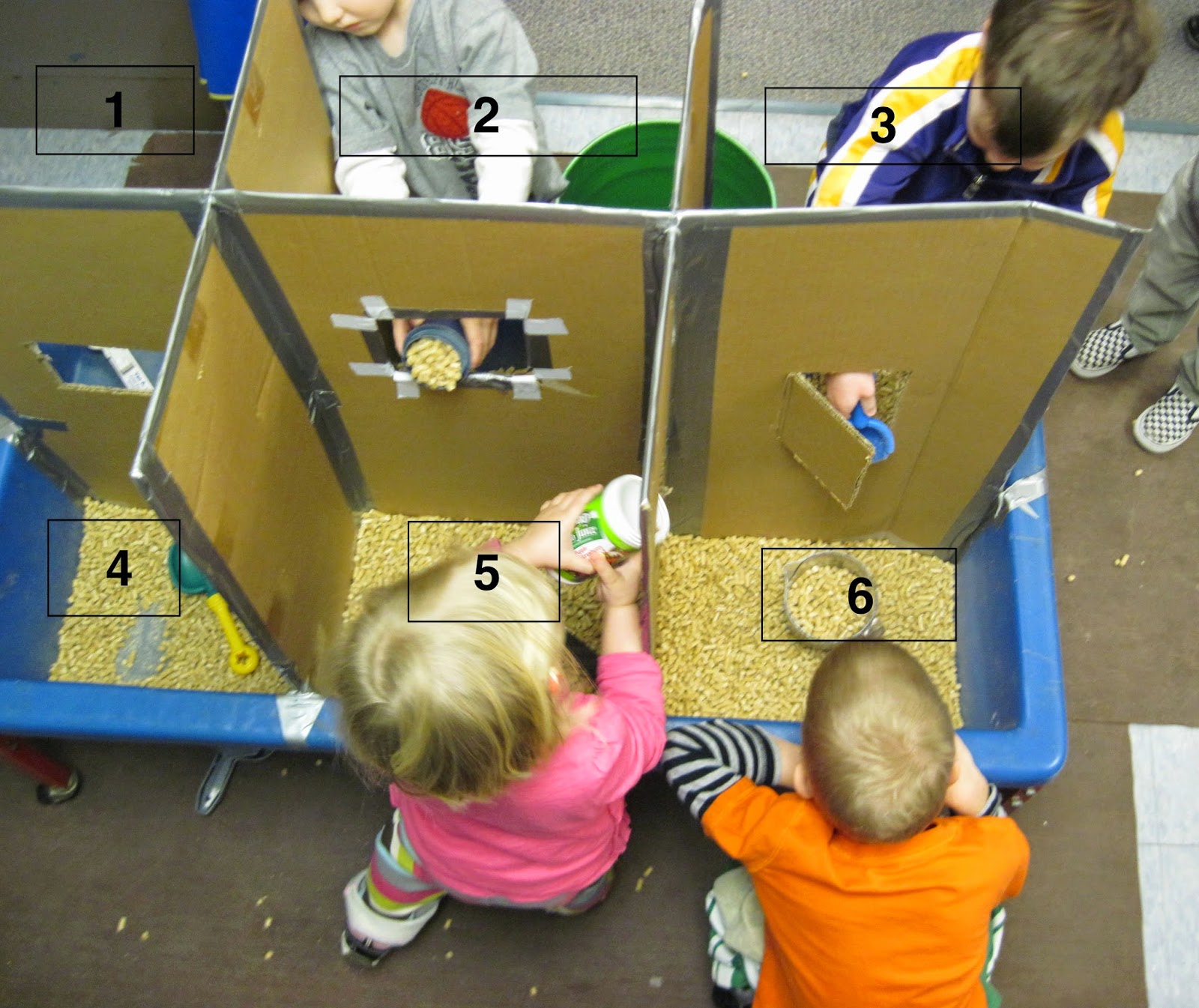 In the version pictured above, the sand table is partitioned into six areas.  Note that there are openings in the cardboard partitions.  Those are there to foster transporting through barriers and to offer unique opportunities for intriguing social interaction.

This past summer, I was in the UK and the Netherlands for a total of 13 talks and workshops.  In one of  the workshops in the south of England, in Bournemouth, one of the participants came up with a new version of the Cardboard Divider apparatus. 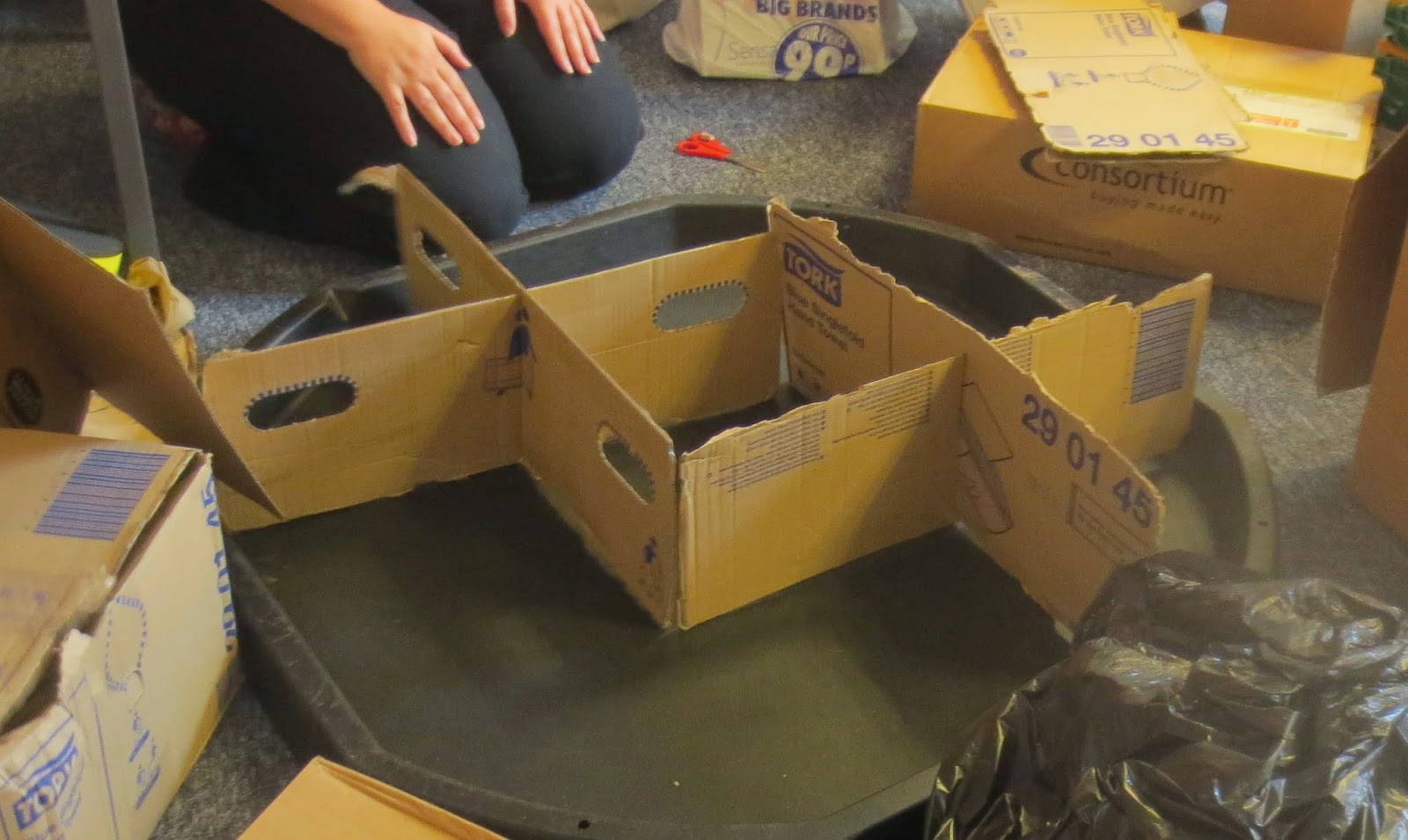 This participant took four sheets of cardboard of roughly equal measurements.  She first spliced two together to make an X.  She did the same with the other two sheets and then taped the two X's together.  The result was an apparatus that was unique and creative and worth replicating.

When I say it is worth replicating, I mean I made a note by the picture that I wanted to replicate it in my sand table.  Before I show you the resulting apparatus, I would really like to take you through the process I used to build this new type of Cardboard Divider.  WARNING: We are about to enter the world of mathematics.

The first thing I needed to do was to measure the dimensions of my table.  My table is 46" long and 21.5" wide.  I drew a diagram with the dimensions of the table.  Next, I added the X's in the table.  I saw that when I did that I had the lengths for two sides of a triangle.  All I had to do was figure out the length of the third side of the triangle so I would know the length of each sheet of cardboard I would need. 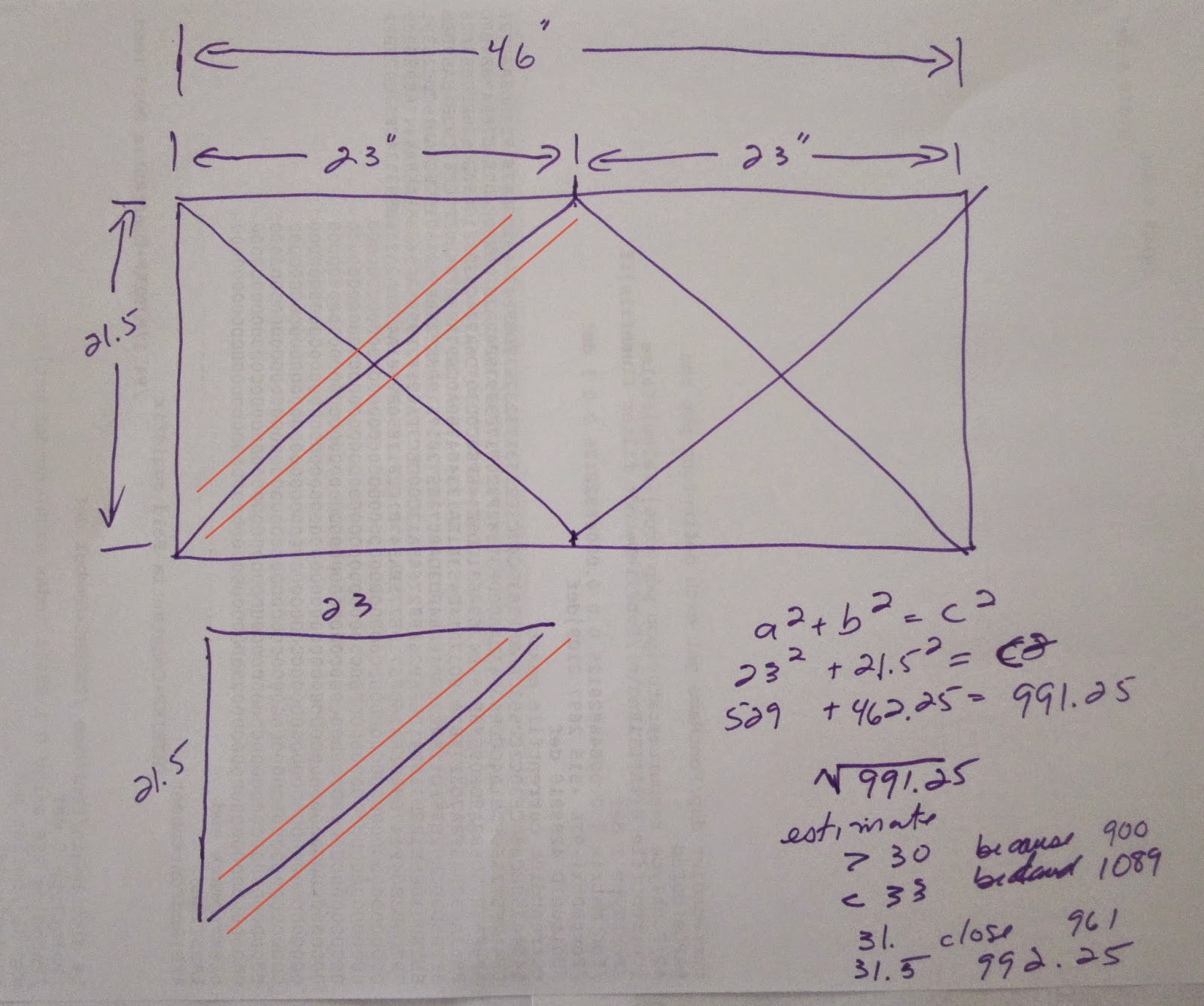 The side I needed to know is in red.  It is the longest side and is called the hypotenuse.  This looked a lot like a high school geometry problem.  I searched using the phrase: "finding the third side of a triangle." Google promptly provided the Pythagorean Theorem.  You can see the theorem in the notes above.  The "c" in the equation is the hypotenuse.  The squaring and adding of numbers was easy, but I could not remember how to find the square root.  When I Googled that, the first suggestion was to use the calculator on a smart phone.  I laughed.  The second suggestion was to estimate.  And that is what I did.  The answer I ended up with was 31.5"  You can see from the notes that it is not exact, but it looked so close I was pretty sure it would work. And besides, cardboard can be bent or modified easily; it is very forgiving.

I now knew I needed four sheets of cardboard that were 31.5" long.   The height was not critical, but I did want them to be at least 24" so they would rise above the table at least 15." (My table is 9" deep.) It just so happened my neighbor bought some big posters and was willing to share his boxes with me. 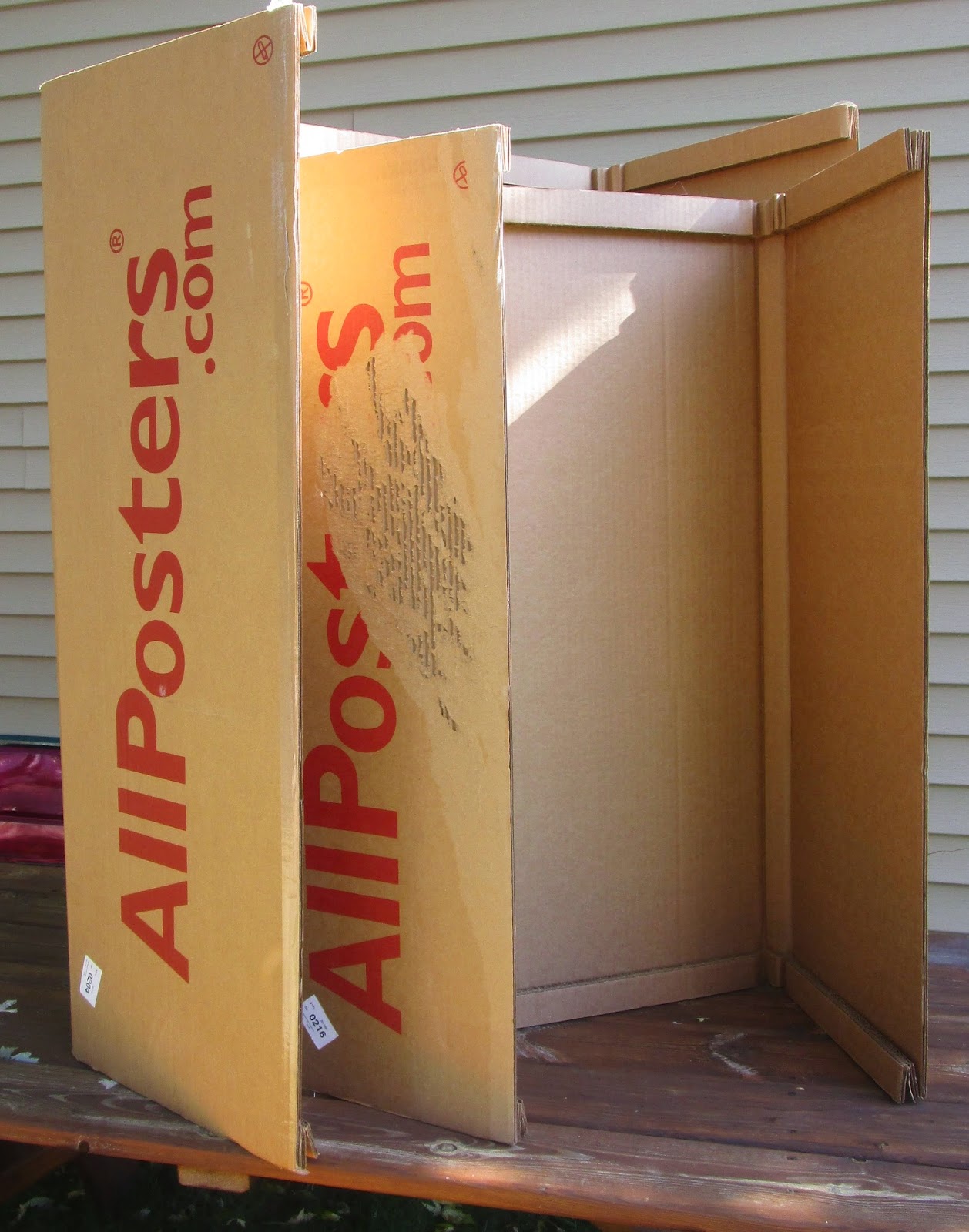 I cut out the sheets to size and then cut slits in the middle of each.  Each slit was cut halfway up the sheet. 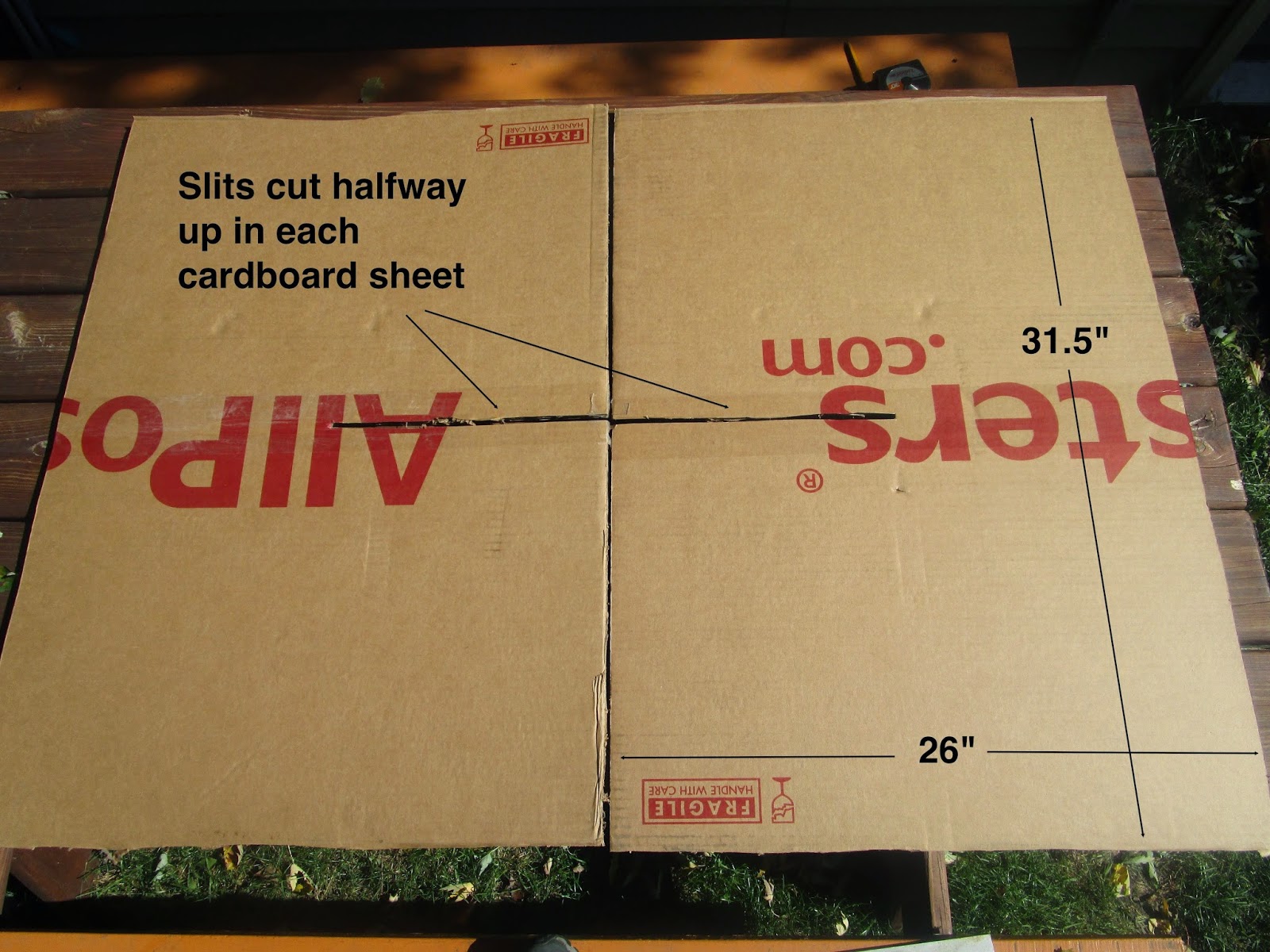 When I got to school, I spliced the sheets together to come up with two X's.  Before doing much taping, I had to see if they really fit.  To my great delight, they did. 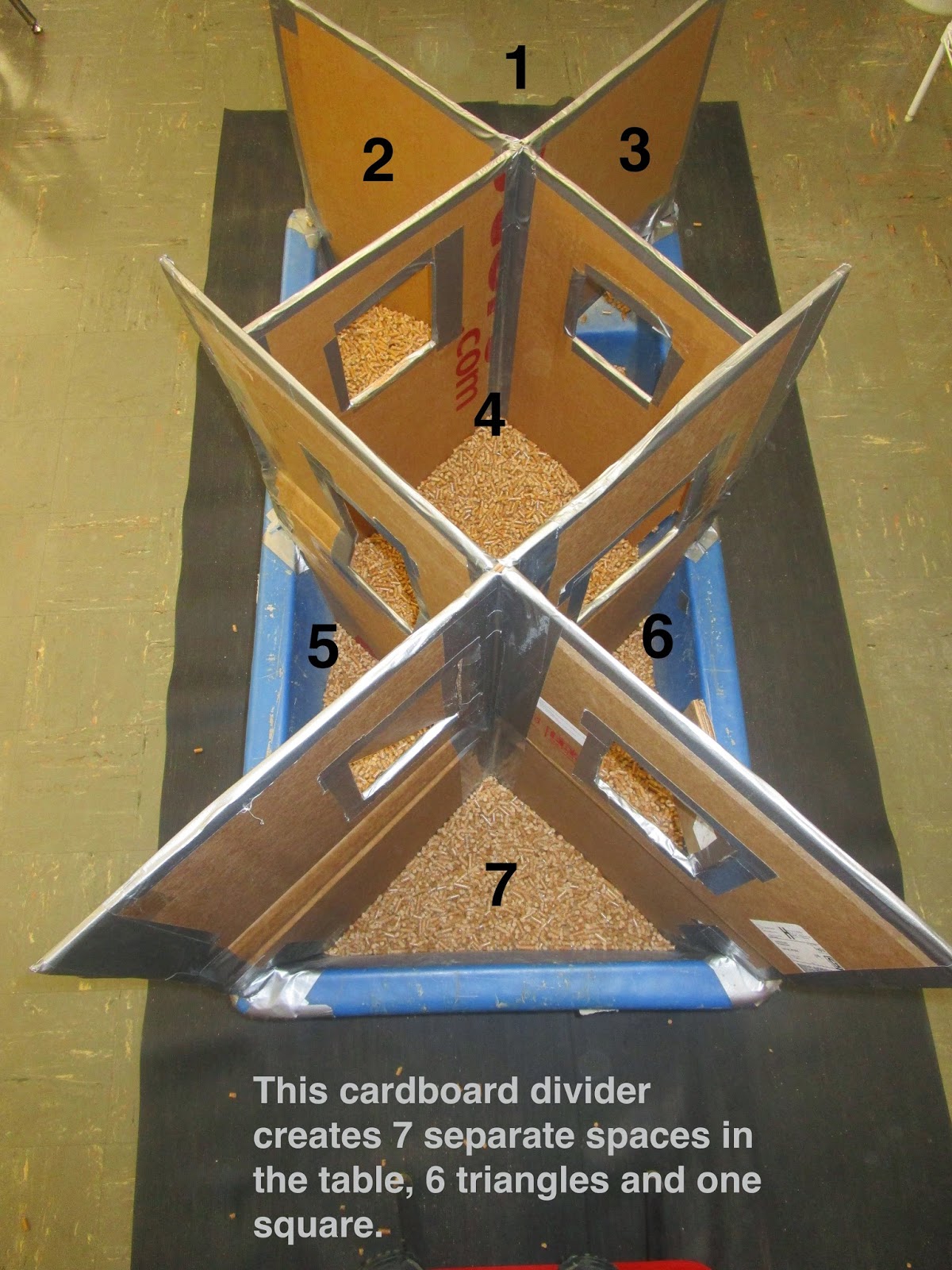 You should have felt like there was a lot of math in this post.  It should not have felt like high school geometry, though, because this was a real life problem.  Though the children were not part of the building, they are still part of the math.  How often do you think children get to work in triangular spaces? 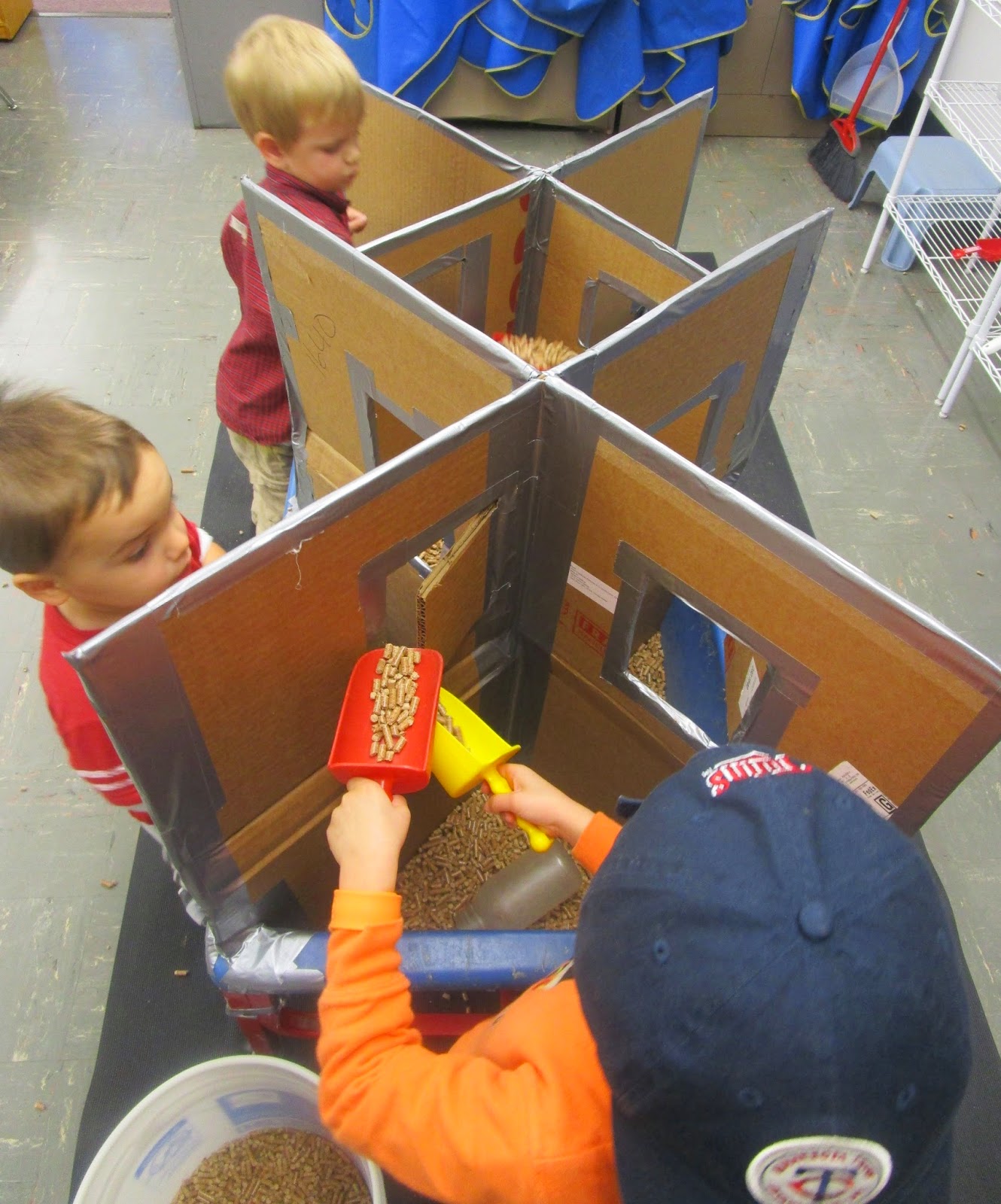 I do not know who the early years practitioner was at Tops Nursery in Bournemouth, but if you are reading this blog, I would like to thank you for the inspiration.

I am so glad inspiration is a two-way street with some worthwhile twists and turns---and even some nice angles.