AN ADDITION TO THE TABLE EMBEDDED IN THE BOX

The Table Embedded in the Box creates an intriguing space for the children to explore.  One of the reasons why it is so inviting is because the box is big enough to encase half the table and still leave room for children to climb in the box and play at the table.  Or in this case, in the box in the table. 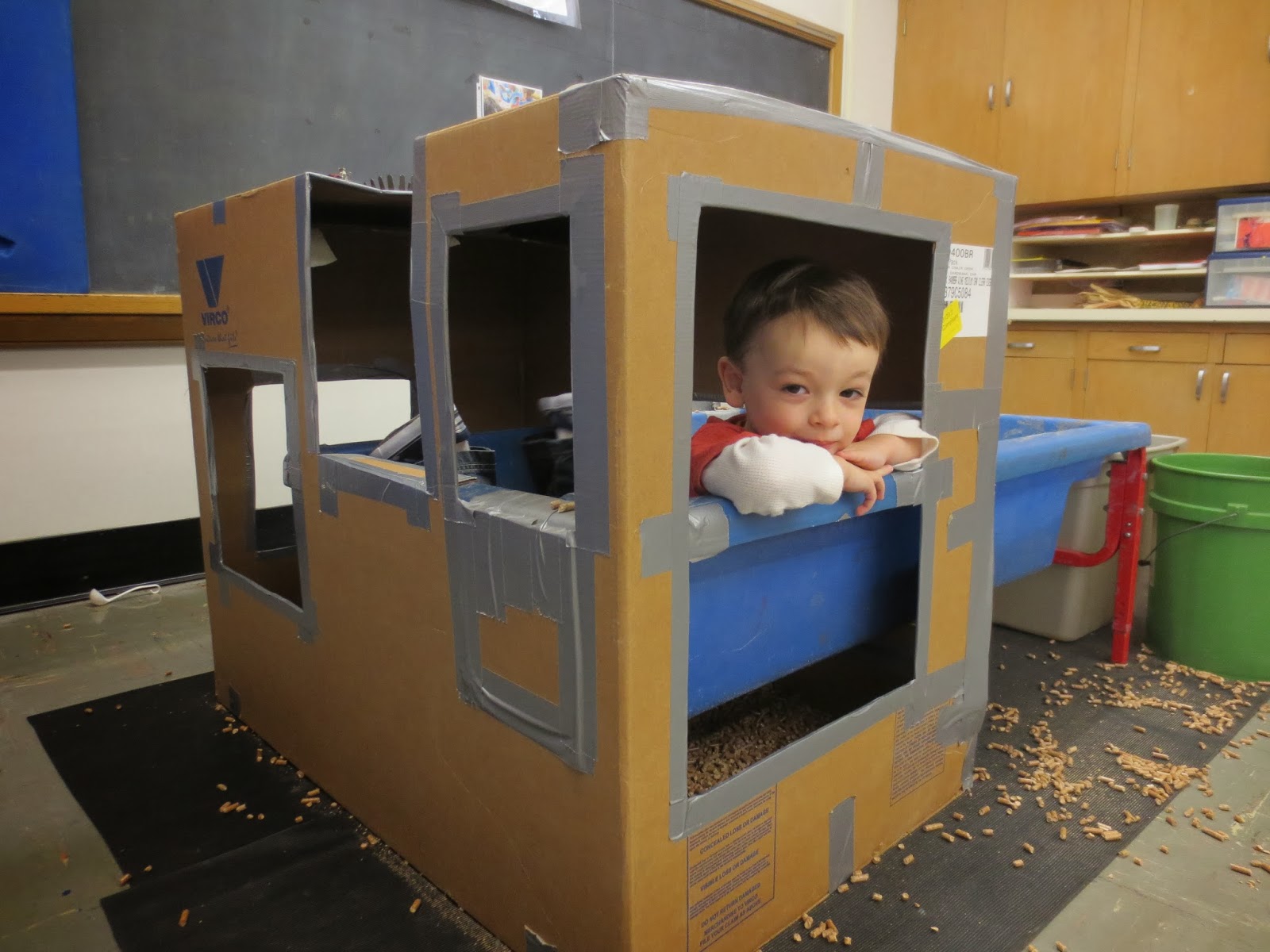 I usually do not let children play in the table itself.  This child I let do it on this day because he had the whole area to himself and I felt like he was "basking" in the space created by the box and the table.  He had found his spot on this day at this time and I was not going to deny him.


There is another reason why this space is so inviting: there is a second box that is taped to the big box.  This box is embedded with two aluminum vent tubes exiting on two different sides of this second box. 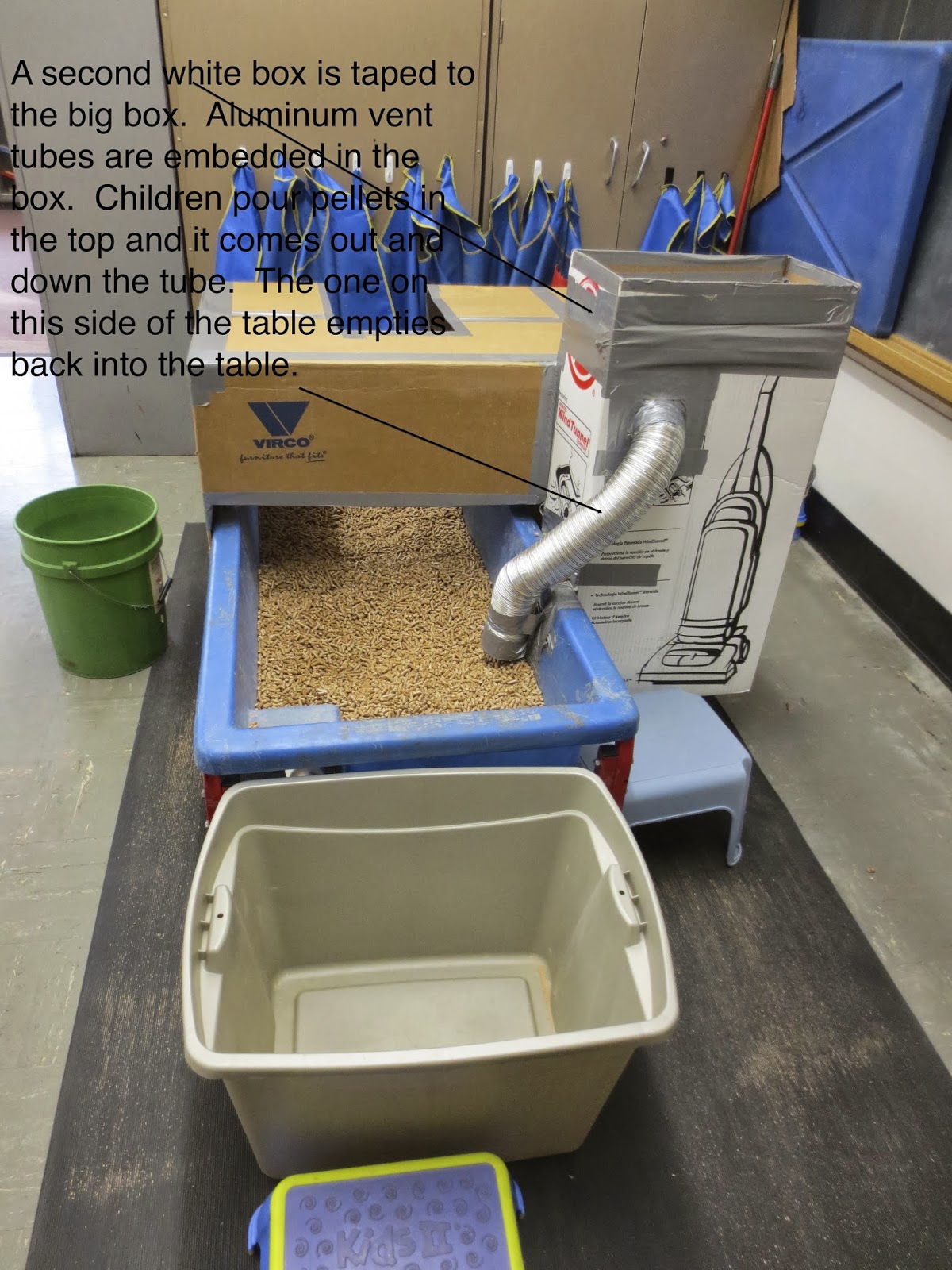 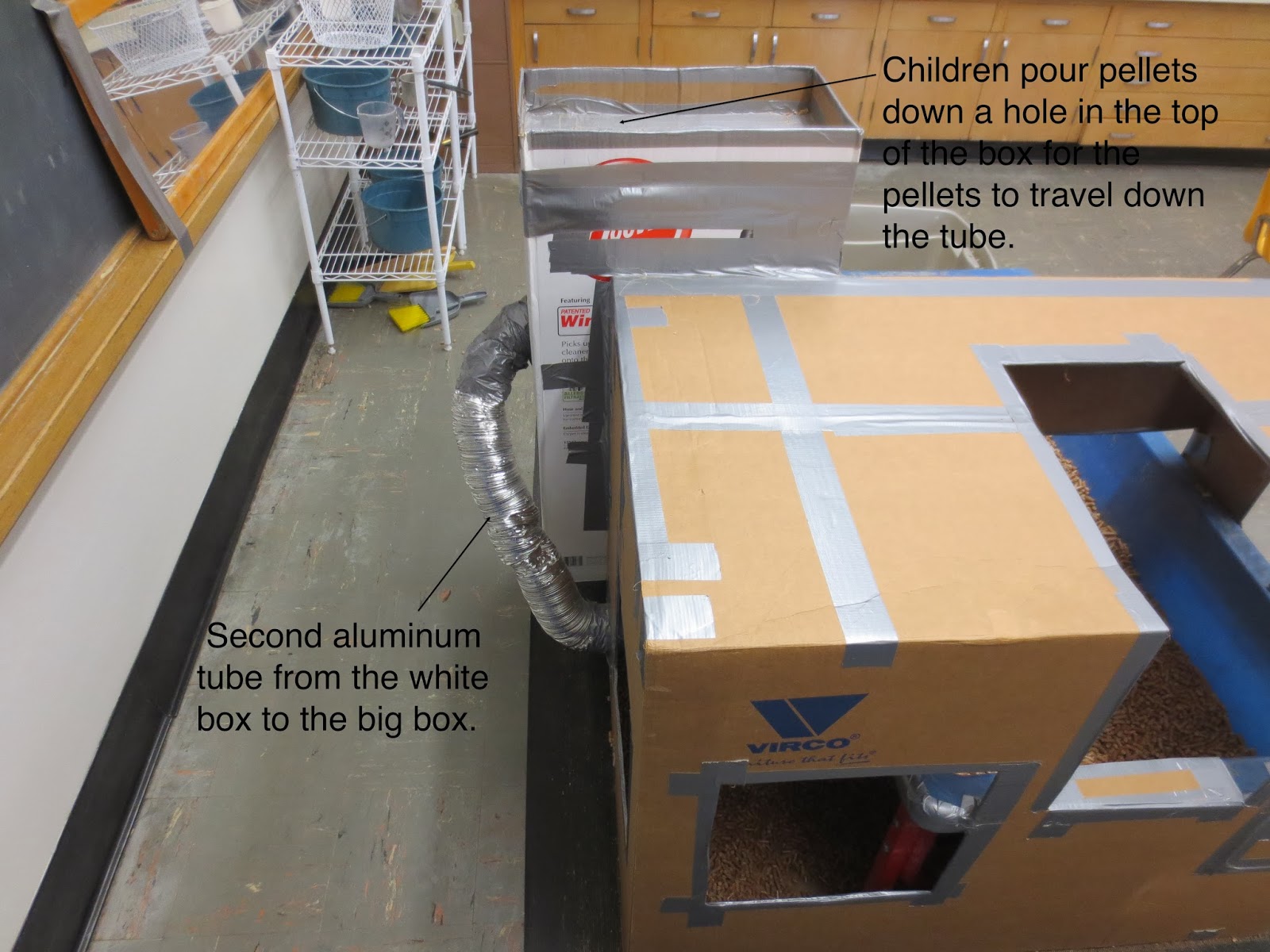 Here is a view of the top of the second box.  You can see the two holes for the aluminum tubes. 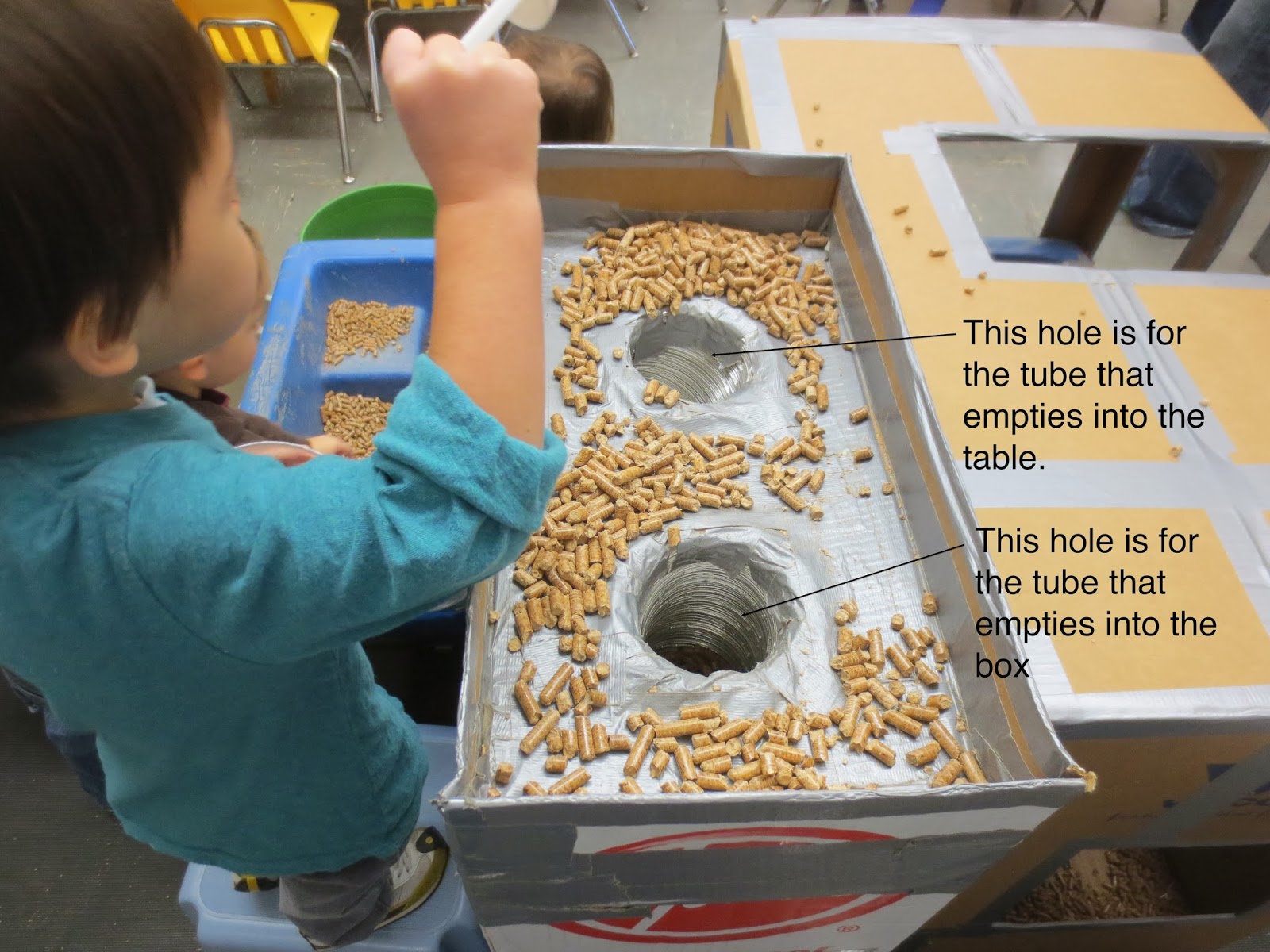 Note all the duct tape.  To keep the aluminum tubes in place, the ends are cut so that the tubes stay in the box.  The strips that are folded over are sharp, so I had to make sure they were covered with plenty of duct tape---and then some. 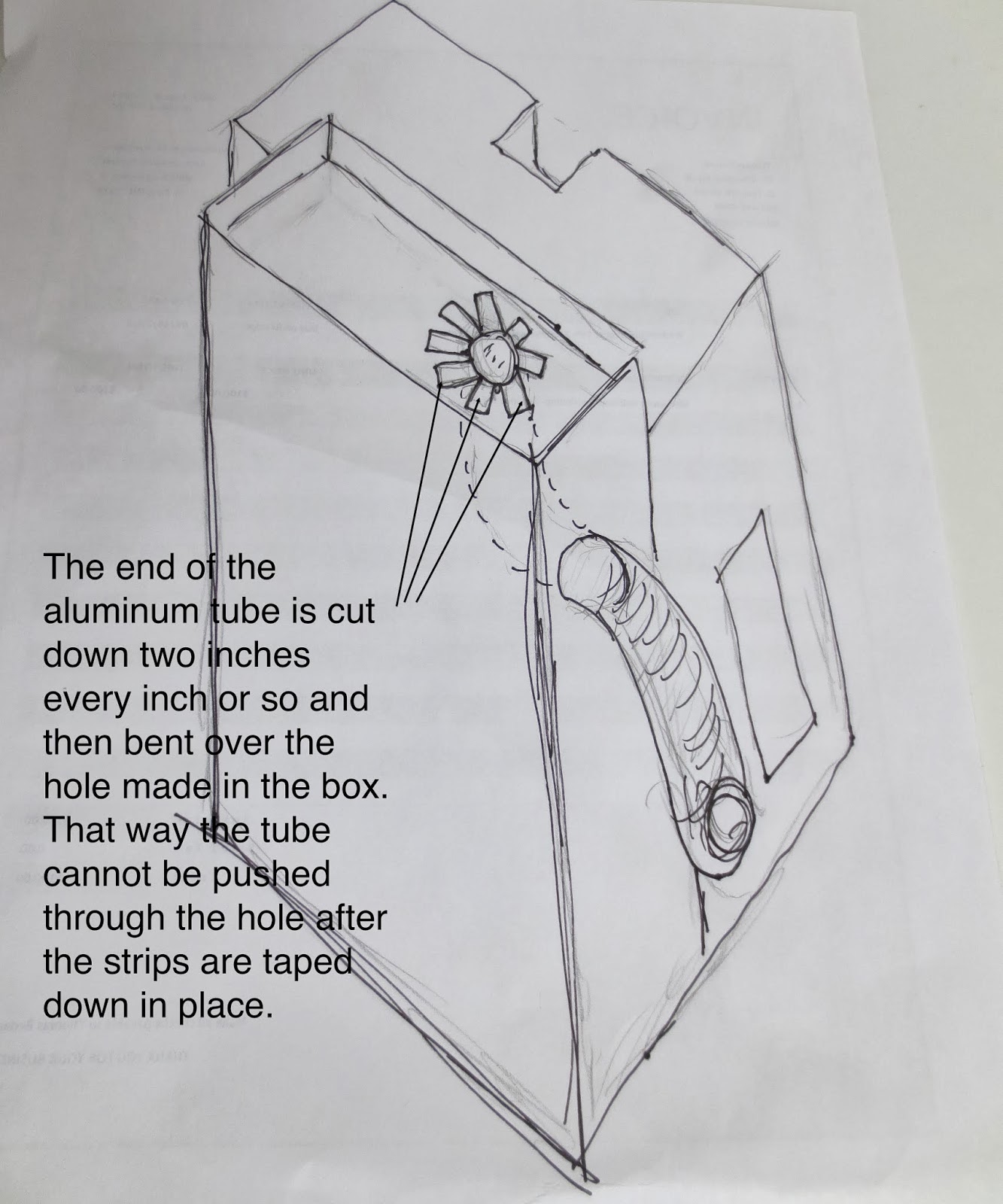 (I hope you can understand the crude drawing.)

Here you can see children fully engaged with the combined apparatus.  In the picture there are five children at multiple levels in multiple and varied spaces. 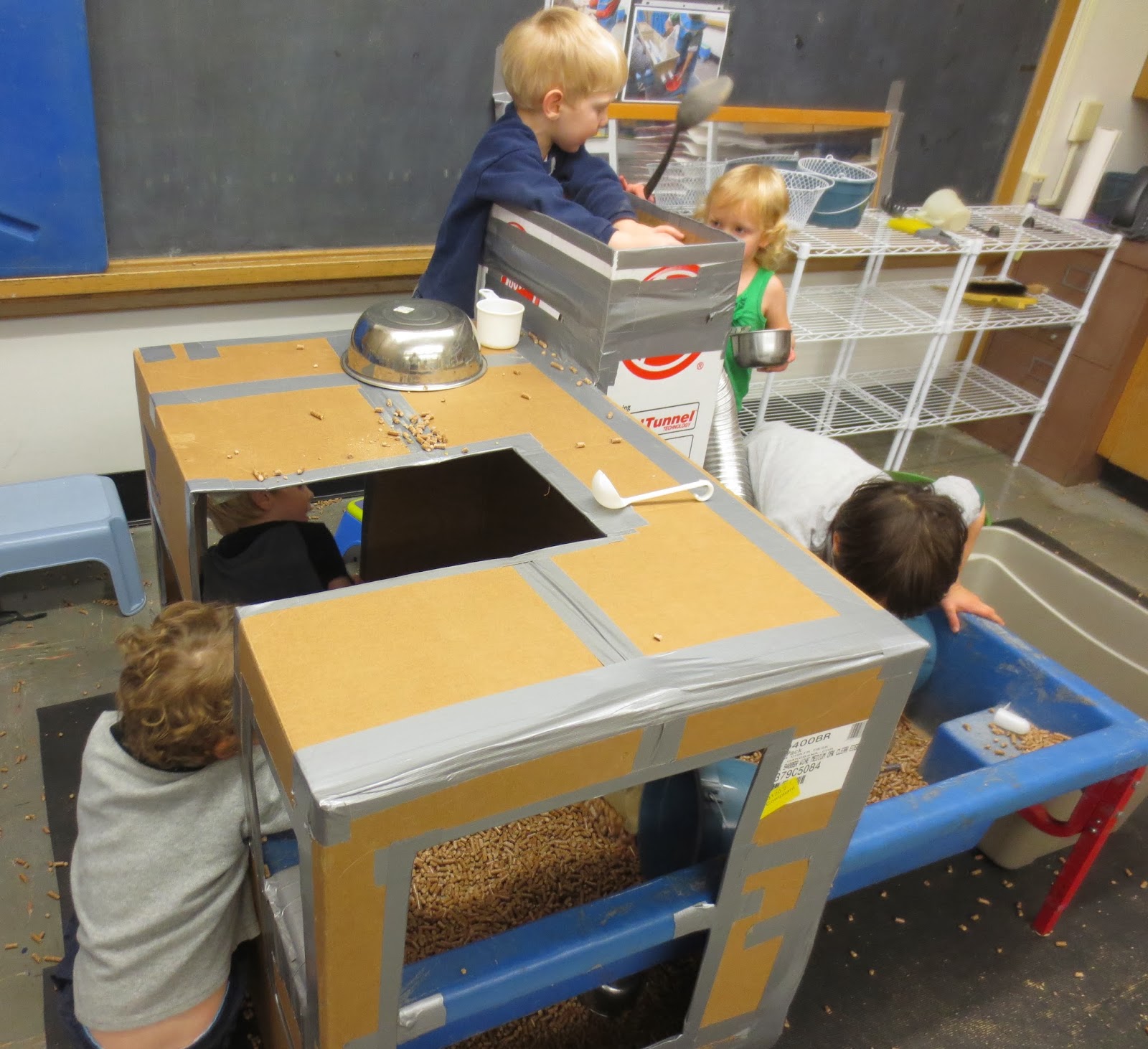 Let's see and listen exactly how the pellets rattle down the tubes.  In the video below, the child scoops pellets from the big box, stands up, steps up on a stool and pours pellets in the hole of the tube that empties back into the box.

Pellets in the Tube from Thomas Bedard on Vimeo.

I have watched this video several times because I am not sure what he does the second time he pours pellets into the hole.  In fact, he dumps very few pellets into the hole and leaves his spoon on top of the hole.  He quickly ducks down to look into the box to see exactly where the pellets come out.  When he does that, he sees there are pellets pooling at the bottom of the tube so he reaches in to scrape a bunch out with his hand.  I am still not sure, though, why he stopped pouring so abruptly and ducked into the box to see where the pellets emptied into the box.  Maybe he heard the pellets only go so far down the tube and realized they did not empty back into the box like they should have.  If that is the case, he is doing a wonderful job of reading the aural cues emanating from the apparatus.

By the way, here is a picture that shows clearly where the pellets actually empty into the box.  It kind of looks like pellet heaven. 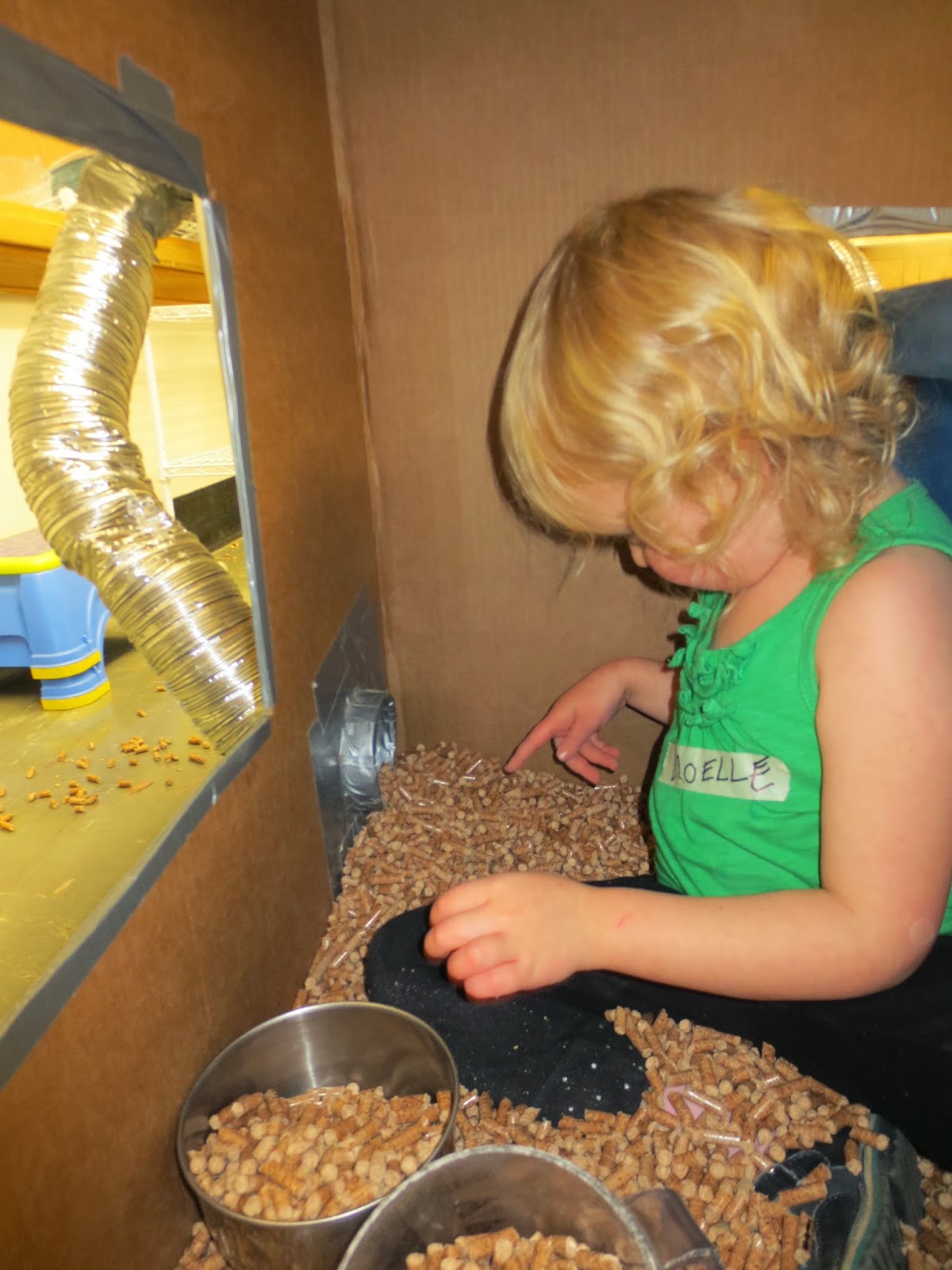 One of the more fascinated play scripts to emerge from this combination of apparatus was making ice cream.  Children would pour pellets down the tube and a child would catch it with his or her bowl.  They would say they were making ice cream.  How pellets rattling down a tube represent making ice cream, only the children know.  And know they do.

Here is a short video clip in which you can see for yourself the ice cream making process.  As the video starts, one child is inside the box and a second child is outside the box.  You can hear the pellets rattling down the tube.  The boy inside the box has a small metal bowl which he places under the pellets coming out of the tube.  With a killer smile, the little guy in the box announces: "We are making ice cream for sale."  The child outside the box looks inside the box to see if the bowl is full and then tells the other child to: "Put it in the bucket."   The boy inside promptly empties his bowl into the bucket.

And that is how ice cream is made.  Hey, but you knew that.

First of all, the child has set up all the pots, bowls and pails with care and order. Not only that, he takes great care to figure out how each sounds.  He almost sounds like a musician warming up.

Could we look at the child figuring out the flow of the pellets, or the children making ice cream or the child doing sound experiments to illuminate all the learning the children are achieving?  Of course. For me, though, I would rather appreciate the wonder that unfolds from moment to moment and be thankful for the time I can spend with these children.