WHY APPARATUS FOR THE SENSORY TABLE?

This past June, another early childhood professional asked me: "Why do you build apparatus for the sensory table?"  Even though I have been doing it for over 23 years, I did not have good answer. I have been thinking about that question a lot ever since.

My answer at this point harkens back to the second post in this blog from July, 2010.  The post was about the lowly 5-gallon pail that you see below. 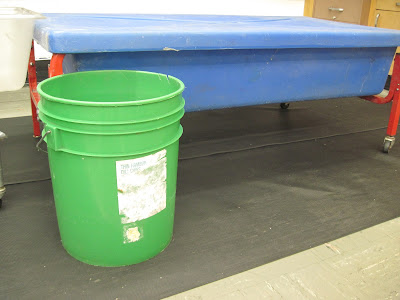 A mother, who worked at a fast food restaurant, brought in this dill pickle pail and asked me if I could use it.  Maybe she thought since I had such a small room, I could use it for storage. Instead---and because I had no place to store it---I put it next to the table.  What happened next was transformative for my practice as an early childhood teacher.

You can read the first transformation in the post about the 5-gallon pail referenced above.  The gist of the post is that the children use the pail to transport in a constructive way (Axiom #1 in the right hand column).  As a consequence, my communication with the children becomes much more positive about operations of transporting around the sand and water table.  In other words, instead of always saying: "No,! No dumping on the floor, I can now say: "Put it in the bucket."  That positive communication completely changes the tenor of communication around the table.

Something else happened in relation to the pail that transformed my practice.  I no longer felt like I had to manage the children around the table.  Rather, I began to see the children as capable of managing their own actions in the environment.  Instead of managing, I was able to observe.  By taking the time to observe, I started to notice how the children were able to manage even more of their own actions.  This whole process is now a wonderful, virtuous circle that carries the day throughout the classroom.

That may seem like a lowly bucket, but it started it all.  The bucket afforded a chance for the children to figure out a constructive way to do what they needed to do: transport.  Since then, almost every apparatus incorporates opportunities for children to discover new and constructive ways to transport.

Though I have not answered the question to my full satisfaction, it will do for now.  And I will keep building.
Posted by Tom Bedard at 9/08/2012