There are some apparatus I bring out every year because the play and exploration around them is so compelling.  One of those is the Large PVC Pipe with Funnels. 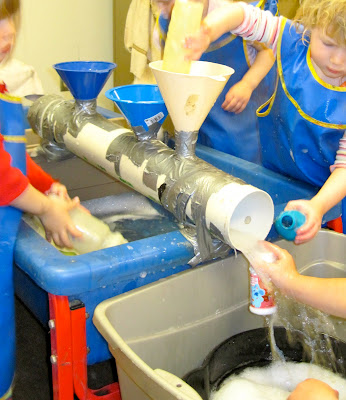 This post reveals where the idea came from and how to make it.  And this post details several types of play and exploration associated with the apparatus from last year.


This year I added an additional element: a clear plastic tube.  The tube was set up on a slant to go from the smaller sensory table and to empty into the tray holding the large pvc tube.  The motive for the addition is captured in the short video below.

There were actually many different experiments with this new addition.  One of the objects that got inserted into the tube was a turkey baster.  It was just a little smaller than the tube itself and the rubber bulb created more friction.  One group figured out that if they poured a lot of water all at once using the 5 gallon pail, the baster was carried out of the tube in one pour.  Two other groups used a slower more persistent method.  They used the smaller containers and slowly watched the baster creep down the tube after each small pour.

Let me share with you a two minute video from one set of fascinating actions that happened this year.  I have actually broken the video into three sections.  The first portion of the video highlights trying to get the baster out of the clear tube.  The second portion highlights serious teamwork to move a bucket full of water.  The third portion highlights the curiosity of a child with another child's operation.  Remember that it is one video cut into three sections so there will be some overlap.

For the first section, concentrate on the actions of the girl pouring water on the clear plastic tube. She keeps pouring the water on the tube right over where the baster sits in the tube.  Listen to what she says at the end to understand what she is doing.
As she pours the water, she says: "That will help it get out."  She says it twice for emphasis.  She is talking about helping the baster out of the tube. As you will see, she is pretty persistent.


For the second section, concentrate on the two boys and the white 5 gallon bucket.  The girl and the boy in the green shirt filled the bucket with water a little earlier.  The boy, Kiki, calls to his buddy Owen for help.  Owen comes over to help.  He knows what to do because he had warned them earlier that if they filled the bucket too full, it would be too heavy.  He nudges Kiki aside and says that they have to let a little water out.  They have to do it three times.  By the second time, they are engaged in some serious cooperation to get the bucket light enough to move.  If you notice, they are very careful not to spill water out of the table as they tip the bucket to make it lighter. Watch.
So they did get it light enough for Owen to move it---with plenty of effort and a little sloshing.  Kiki is impressed at Owen's strength.  With the pail resting securely on the lip of the table on the tray, Owen is ready to pour water into one of the funnels and Kiki is positioned to catch it as it pours out the tube.

The third section is impossible to understand without knowing what is going on in the first section of the video.  As Owen is pouring water into a funnel, something catches his eye to his left.  As he goes to refill his bottle, he takes a more focused look at what caught his attention.  We can't see it, so what is it?  The thing that has caught Owen's attention is Mairi's actions; she is still pouring water on the tube to get the baster to move.  This is two minutes into the original video and I told you she was persistent.   Owen watches Mairi's actions for more than 10 seconds.  You can almost see the wheels turning in his head as he tries to figure out what is going on.  Watch.

You may ask why didn't I redirect Mairi's pouring in the first place.  Why didn't I direct her attention to the pouring water at the end of the tube so the water would flow through the tube and really help the baster get out?  Good question.  My answer is this:  The longer I teach the less I feel the need to intervene in children's play, especially if they are absorbed in their play.  But still, don't I want her to be successful in her actions?  Another good question.  I do want her to be successful, but my answer is still the same.  I do not want to be the person with all the answers.  Sometimes their experiments fail, but sometimes, like with the pail, the children create solutions to their chosen task.  I value their experimentation and exploration so much that I become intrigued like Owen and wonder what is going on.